Chronic constrictive pericarditis (CCP) is the end stage of a chronic inflammatory process that produces a fibrous, thick, constrictive pericardium surrounding the heart with a limitation of diastolic ventricular filling (1). Basic pathophysiology of CCP is yet controversial (2); but it seems that the most important factor to be considered in its pathogenesis is the heart constriction and the limitation of the diastolic distensibility of the two ventricles in association with an inability to generate an adequate preload (2). The etiology in most of the cases is difficult to establish (1); it is even unknown in many patients. Nevertheless, in Africa, tuberculosis is the common cause (3,4) while in western countries (5,6) the main etiologies are: idiopathic, post-surgical, radiation injury. In case of CCP, clinical presentation is not specific making diagnosis not always easy: CCP is often confused with hepatic cirrhosis or furthermore restrictive cardiomyopathy and finally with endomyocardial fibrosis (1). In this context, cardiac catheterization still be an essential technique for accurate diagnosis. When the diagnostic is made, the most effective therapy is surgery. Classically, a pericardiectomy is indicated; surgical approach is not unique, the extent of pericardial resection changes according to teams and the surgical risk factors are variously appreciated as well (2). In literature, only a few publications and data on CCP treatment and results in Africa (7,8) are listed versus a large number of CCP articles from developed countries (9,10).Therefore, for filling the gap, the aim of this study is to report our experience, one of the largest surgical experience with CCP in Sub-Saharan Africa in terms of clinical and surgical outcomes and risk factors of early death after pericardiectomy.

Between 1977 and 2012, 120 cases were recorded. There were 72 men and 48 women; average age was 28.8 years plus or minus 10.4 years standard deviation (SD) (extremes 8–51 years). Etiology was tuberculosis (119 cases) and bacterial infection (1 case). Diagnosis of tuberculosis was based on history, on close contact with tuberculosis, on pericardial calcifications at chest radiography and pathological findings. Average duration of the disease was 30 months (3 months–25 years). Clinical characteristics are in Table 1. Clinical feature of systemic venous congestion or a diastolic syndrome was observed in all the cases. Systemic venous congestion symptoms were as follows: dyspnea, hepatomegaly, raised jugular venous pressure or jugular venous distension, hepatojugular reflex, ascite, peripheral edema. Chest radiograph shown an average cardiothoracic ratio (CTR) of 0.55 (0.45–0.70) and pericardial calcifications (n=63, 52.5%) without pleural extravasations (n=99, 82.5%). 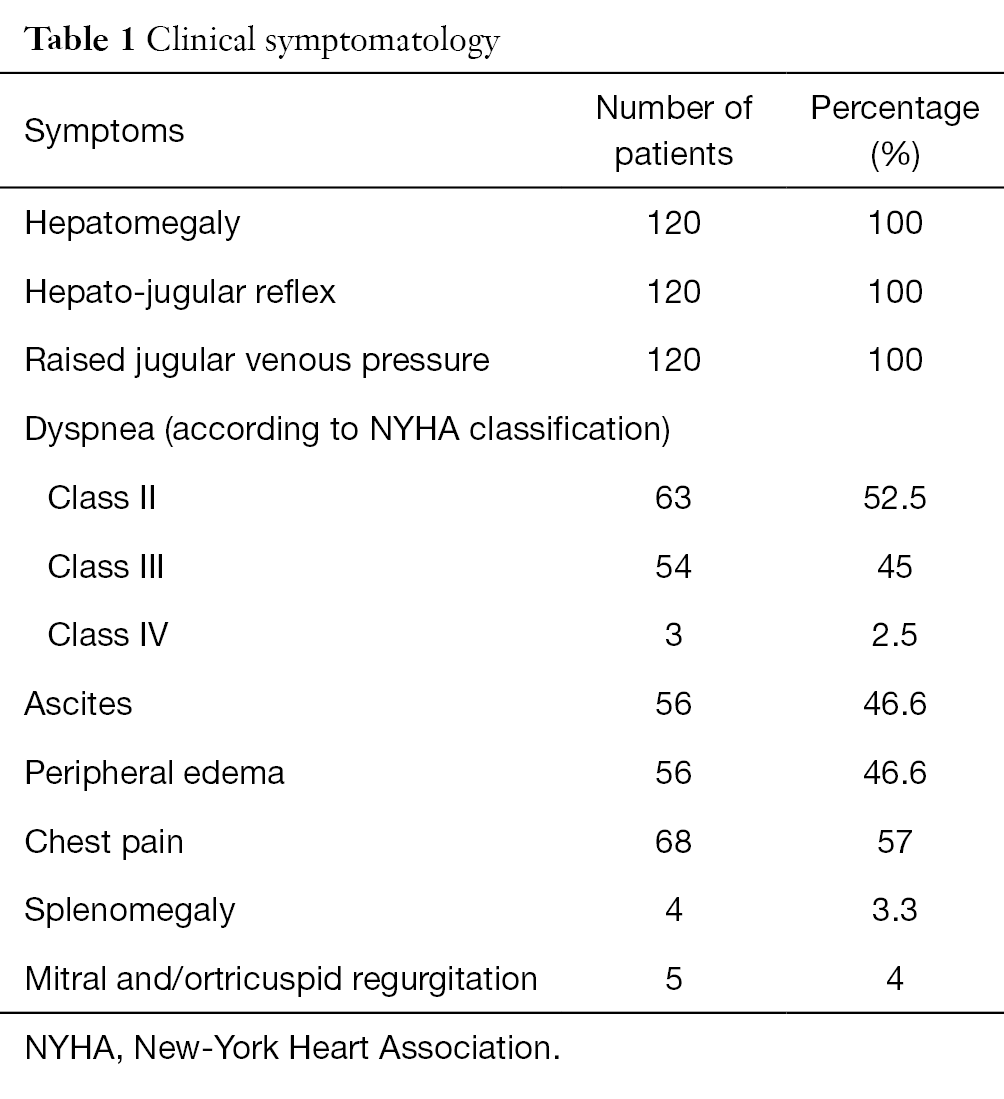 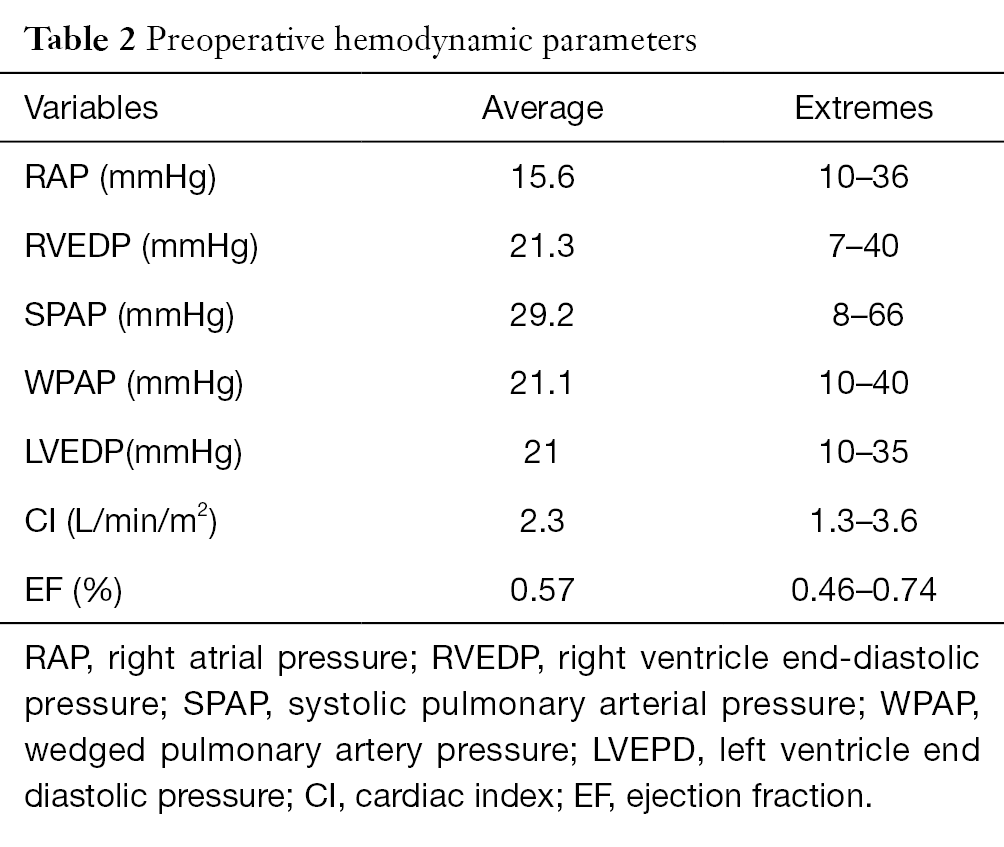 Hemodynamic parameters and cineangiograms confirmed the diagnosis of pericardial constriction in all the patients. In five cases, there was an associated mitral or mitro-tricuspid regurgitation.

All the patients underwent pericardiectomy; 117 cases (97.5%) without cardiopulmonary bypass (CPB) and 3 cases (2.5%) with CPB. A total pericardiectomy was performed through a median sternotomy (97.5%, n=117) or a left antero-lateral thoracotomy (2.5%, n=3). Pericardial resection including the epicardium was performed in all patients; it was an “epicardo-pericardiectomy”. Pericardial resection started anteriorly from the left ventricle, then to the right ventricle, at last to the right and left atria. Pericardial resection was carried out from a phrenic nerve to the other; it was also carried superiorly on the ascending aorta and the pulmonary trunk, the diaphragmatic and inferior surfaces of the two ventricles. If there was no risk of hemorrhage, we used to liberate the intra-pericardial portions of the superior and inferior vena cava and the pulmonary veins. When calcifications were tightly adhesive to the myocardium, islands of pericardial calcareous layers were left in place in order to avoid heart laceration. Surgery revealed sub-acute CCP (n=12; 10%), fibrous CCP (n=36; 30%) and calcified CCP (n=72; 60%). Caseous material into the pericardial cavity had been also observed intra-operatively (n=12; 10%). After surgery, a definite diagnosis of tuberculous pericarditis had been done based on pericardium histological section in 48 patients. For statistical analysis: data were expressed as means; the Anova test or the Mann-Whitney test were used for the quantitative variables and the Fisher Exact test for the qualitative variables. A P value <0.05 was considered statistically significant. 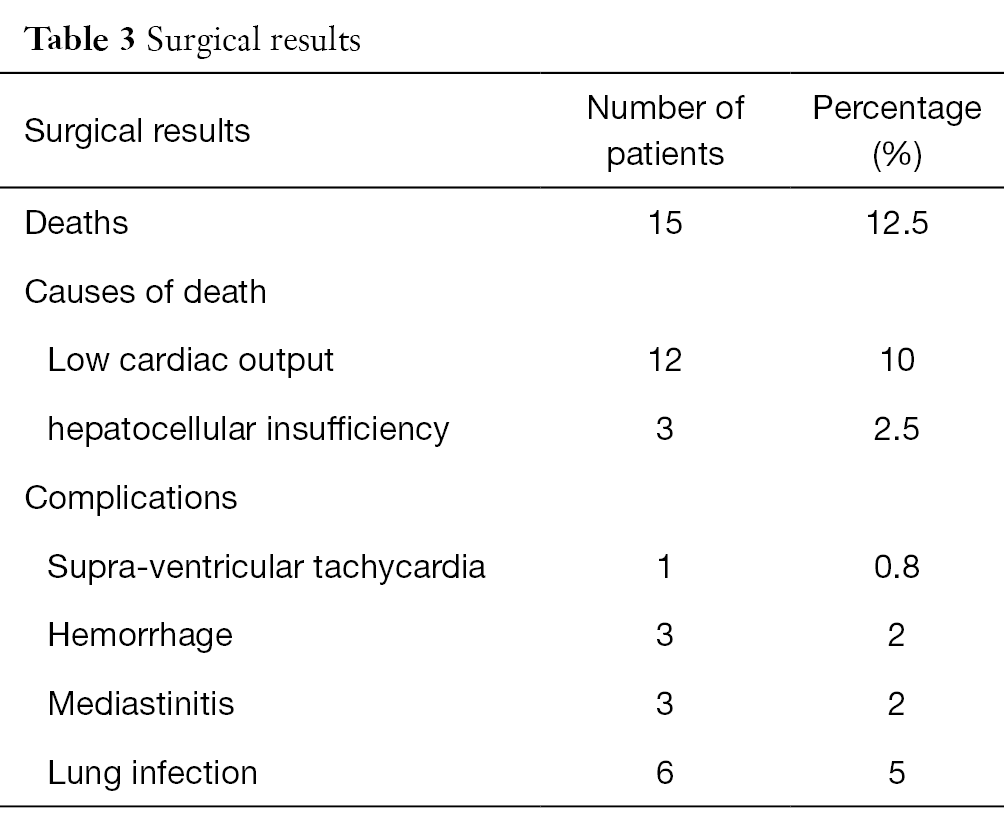 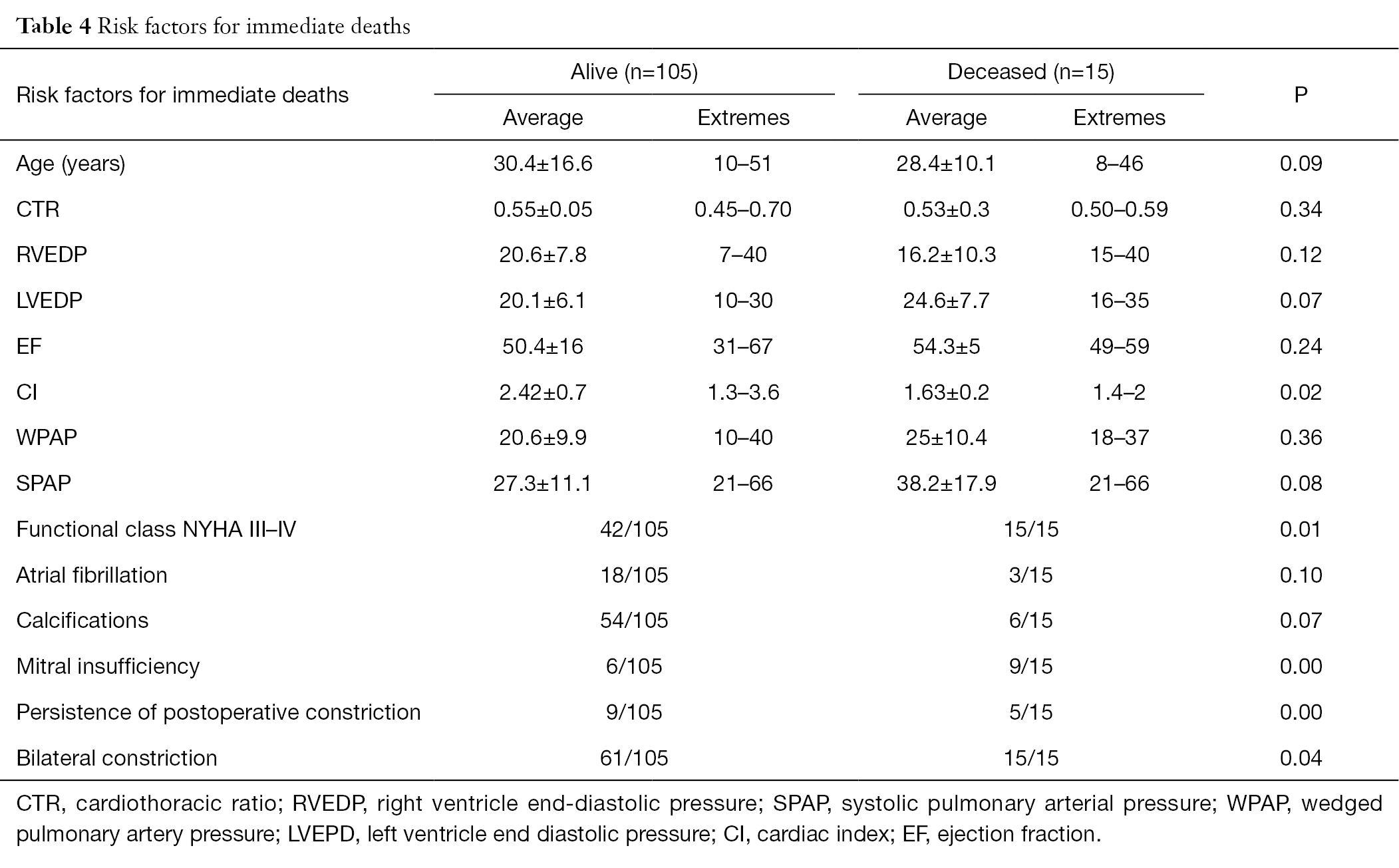 Among the 105 patients who survived, 83 were followed-up from 1 month to 10 years (mean 4 years) and 22 were lost to follow-up. No late death was recorded. All the patients were at the functional class I or II (NYHA) with no systemic venous congestion clinical signs. Thirty patients underwent a cardiac catheterization late postoperatively; we observed a significant reduction even a normalization of the right and/or the left ventricular diastolic pressures (Table 5) and a disappearance of the dip-and-plateau after pericardiectomy.

As limitation of this work, we should mention that it is a retrospective study.

The majority of acute pericarditis in tropical countries is attributable to tuberculosis (4) and complications include early or late pericardial constriction, which occurs between a few months and several years (2).

Because of the acquired immune deficiency syndrome (AIDS), an increase in prevalence of pericarditis, and specifically tuberculous pericarditis, has been observed in Africa (4,11). However, only two cases of the combination tuberculous CP and AIDS were seen in our study. In the opposite side, etiological pattern in developed world seems different: it was either idiophatic, secondary to mediastinal radiation for malignant diseases; post-cardiac surgery, or related to systemic diseases as mentioned in most of the recent series (5,6,12) with a significant impact on postoperative prognosis (9).

The commonest symptoms described in the literature (13,14) with a frequency of 90% to 98% are similar to the ones we found: hepatomegaly, raised jugular venous pressure. Ascites and peripheral edemas are less frequent (50% to 80%) (13).

Right ventricular failure coexisting with small or normal radiological heart size may suggest pericardial constriction in 50% of cases according to Galey (15). According to the same author cardiomegaly cannot exclude a pericardial constriction as we had observed in 60% of cases (n=72). In our study X-ray cardiomegaly was related either to caseous material surrounding the heart or secondary to associated valvular lesions.

Low voltage QRS complex and negative T waves in all electrographical derivations were highly suggestive of a possible pericardial constriction in our population.

Two-dimensional echocardiography was not 100% specific in our experience, and cardiac catheterization was performed in all cases. It provided to us definitive confirmation of the diagnosis of CCP. In their study, McCaughan et al. (14) demonstrated in all their cases of CCP an increase and an equalization of the right and left atrial and ventricular diastolic pressures with a characteristic dip-and-plateau (2).

Cardiac catheterization and angiocardiography enabled us to formally eliminate a right or a bilateral endomyocardial fibrosis, a restrictive myocardiopathy and to evaluate the severity of coexisting valvular lesions.

Neither Computed Tomography, nor Magnetic Resonance Imaging was used; these imaging techniques could have allowed us to appreciate the pericardial thickness and the importance of the constriction (1,2).

In our experience, hepatic cirrhosis has become an absolute contraindication for surgery; we had three deaths due to a hepatic cirrhosis with hepato-cellular insufficiency after a satisfactory pericardiectomy.

Left antero-lateral thoracotomy allows a better exposure and liberation of the left ventricle in its anterior, lateral and inferior aspects; but limits access to the right atria, of the superior and inferior vena cava.

Median Sternotomy is performed more rapidly; it provides an easy access to the right cavities and to the left ventricle; it allows extended pericardial decortication; it is furthermore indicated in cases of massive pericardial calcifications; it allows easy use of CPB if necessary. According to Mavitas (13), after a median sternotomy, the post-operative pain is decreased and the duration of hospitalization shorter.

In severe cases with calcifications and/or dense myo-pericardial adhesions, we recommend a restriction of the decortication to the ventricles and careful liberation of the atria, vena cava and pulmonary veins. This approach is recommended if there is an absence of hemorrhagic risk, if a good cleavage planes for dissection exists, if the texture of the cardiac structures is not excessively thin and friable. In contrast in patients with an obvious increased hemorrhagic risk we leave calcified pericardial layers in place.

All the pericardial layers are addressed by the decortication. In calcified CCP, the epicardium was always very thick and highly adhesive to the myocardium, making it difficult to visualize a correct plane of dissection and increases bleeding risk during dissection between the myocardium and the epicardium. In these cases it is recommended to use the technique of “patchwork’’ sectioning of the visceral pericardium (17) or the one described by Faggian et al. (18). In our study, calcifications were always associated with a thick and very hemorrhagic epicarditis making the correct plane of dissection difficult to find.

The rate of hospital mortality of 12.5% in our study was moderately high. Ling et al. (9) report 6% of hospital deaths in 132 operated CP cases. Other authors have reported similar results (10,12,18-22); Merle et al. (3) in their short series of four patients mentioned one early death. The most frequent cause of early death was a low cardiac output (1,13), which corresponds to our observation.

Seifert et al. (19) demonstrated a correlation between the functional class and operative mortality; and identified a relationship between end-diastolic pressure of the right ventricle end-diastolic pressure (RVEDP) and risk of death after surgery. Contrary to Seifert et al. (19) and McCaughan et al. (14), increase of RVEDP was not always a significant risk factor; we did not find any significant difference between the patients who survived: RVEDP average 20.6±7.8 mmHg and those who died postoperatively: RVEDP average 16.2±10.3 mmHg.

According to McCaughan’s observation (14), opposite to ours, parameters such as the increase of right or left atrial pressure and increase of the pulmonary blood pressure had significantly influence on surgery risk. Also contrary to our study, calcifications or atrial fibrillation did not seem to be significant risk factors for death. Contrary to the same author, in our viewpoint, the CI could be a risk factor (P=0.02).

Concerning functional status, the immediate and late results after pericardiectomy were satisfactory (2,9,14,18), and similar to ours.

Based on our experience, CCP surgery can be performed safely with an acceptable hospital mortality and a significant improvement of patients’ functional status at long term after surgery.

Ethical Statement: The study was approved by the institutional ethics committee of Bouake Teaching Hospital (No. 1/2015). All authors were contacted for this study to get oral consent to be part of it.