The rebirth of cardiac surgery in Sudan

Modern cardiac surgery as we know it today can be deemed to have started with the cases of closed mitral comissurotomy done by Cutler in 1923 (1). Progress then continued in other centers (2-4) but the real surge did not happen till the first successful open heart operation was performed by Gibbon on the 6th of May 2003 (5). This latter operation was done using a heart lung machine and this heralded an era which led to the possibility of safe surgery for the treatment of diseases of the heart and surrounding great vessels.

Sudan has a long tradition in heart surgery dating to 1959 (7). However, the service has been characterized by many ups and downs. This paper is part of an effort to document the history of heart surgery in the country since it first started and it profiles the latest resurgence in the ten years from 1998 to 2007 when three hospitals started a sustained program of open heart surgery which has continued till today.

In addition to these hospitals the Salam Centre for Cardiac Surgery started operations in 2007 and the Wad Medani Heart Center started in 2010. All the mentioned hospitals are in the capital Khartoum apart from the last hospital which is in Wad Medani, the second largest city in Sudan. For completeness sake it must also be mentioned that three private hospitals in Khartoum are fully equipped to perform open heart surgery but this has not been documented here.

Readily available data in AGH, SHC and ATH was collated after obtaining consent of the management of the hospitals.

In SHC this was done by reviewing the operating room database which was started by a personal effort from the senior perfusionist Sister Asma Hamza. This database is an extensive record prospectively filled for all the operations done in SHC and contains 68 different pieces of information about each patient including pre, intra and postoperative data.

To supplement the above personal recollections for the period the authors physically served in the different hospitals was collated and interviews were done with other hospital staff who were present in the years in question.

For the purposes of this study and to keep the information uniform the data collected above was collated as year of operation, type of operation and number of surgeons in the hospital.

The obtained results were divided into early, intermediate and present.

Rheumatic heart disease is documented to having being rare but present in Khartoum Teaching Hospital (KTH) as early as 1908 (8). There was no record of any surgical intervention being tried at that time despite an increase in mitral stenosis cases published from KTH in 1937 (9).

The first documented cases of cardiac surgery operations were however after the arrival of a young British surgeon Mr. John Jacques FRCSED in 1953. In the period from 1959 to 1962 he managed to do the following cardiac operations:

These efforts were abruptly stopped by the sudden death of Mr. Jacques in 1962.

The mantle however was quickly carried thereafter by Mr. Ahmed Abdelaziz (Figure 1) a Sudanese surgeon who had been sent to the UK to train in cardiothoracic surgery. He returned in 1964 and established a cardiothoracic surgery unit in ATH. He is the true father of this speciality in Sudan and was also very instrumental in the furthering of Surgery in general. 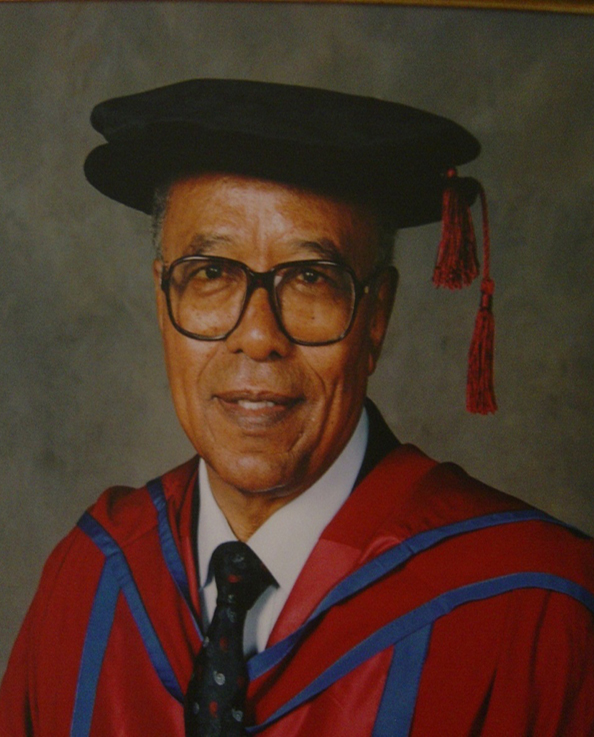 Mr. Ahmed Abdelaziz started immediately operating in the unit in ATH by doing closed heart and thoracic operations and by 1974 was deemed knowledgeable enough to write a review on the subject of treatment of mitral surgery in a very prestigious international journal (10).

Mr. Ahmed Abdelaziz however had his eyes set on upgrading his unit to do open heart surgery operations and to this end he started from 1976 to 1979 to do open heart surgery animal experiments with Professor Salaheldin Imbabi a veterinary doctor. He was assisted by Dr. Kamil Alsadig, Dr. Mohammad Saeed Elfeil and Dr. Ian O’Malley (the Vice President of the Royal College of Surgeons of Ireland at the time) and Dr. Hassan Mohammad Ibrahim who provided the anaesthesia. To help with this program he was visited in February 1977 by Mr. Christopher Lincoln from the Royal Brompton Hospital in London, UK who helped him and Prof. Imbabi to do 40 experimental open heart operations in 11 goats and 29 sheep.

These experiments gave the team the confidence to start operating on humans and this was done in two visits at the end of 1979 and 1980 with the visiting British surgeon Mr. Donald Ross in which two cases were done in the first visit as the first open heart surgery cases in Sudan (an open mitral commissurotomy and an ASD).

The greatest achievement in this phase however was the sending of staff by Mr. Ahmed Abdelaziz to train in the UK. He sent two surgeons, intensive care nurses, operating room scrub nurses, two perfusionists to the UK where they spent periods ranging from 1 to 4 years.

The above staff on their return formed the backbone of the latter periods.

This period started with the return of the staff sent to train in the UK. It was spearheaded by the return of Mr. Ibrahim Mustafa in 1981 and Mr. Mohammad Saeed Elfeil in 1982.

Help was given at this period by a visit from Prof. Magdi Yaqoub in February 1982 when four open heart cases were done. From then on the program was well established. By 1983 when Ahmed Abdelaziz retired there were two active open heart surgery units in ATH. In 1984 a team from Jeddah in Saudia Arabia visited of Saudi team and 34 open heart surgeries were done in 1 week (18 by the Saudi team and 14 by Mr. Mustafa & Mr. Elfeil). These included the first valve replacements in Sudan. However one downside of this visit is that job offers in Saudia Arabia were given to all of the paramedical staff most of whom accepted them leading to the stoppage of the local program.

An attempt at restarting the program was done in 1987 when a Chinese team (comprising an anaesthetist, an intensivist and a perfusionist) visited and 13 open heart surgeries were done by the two Sudanese surgeons. However this was soon followed by the disastrous death of Mr. Mustafa in 1988. After that without the previously well trained staff and facing financial constraints Mr. Alfeil continued doing closed mitral valvotomies, thoracic and vascular operations until he retired in 1993.

AG was the first hospital to start operating in an effort spearheaded by the State Ministry of Health of Khartoum State in 1998. It started with a Chinese surgical team which was joined by a Sudanese surgeon who thereafter left in late 1998 to rejoin the hospital in 2003. In the middle of 1998 another two Sudanese surgeons who had been in training in Turkey joined the team followed by another two in 2003 and yet another two in 2004.

Also in the same period five different surgical teams (apart from the Chinese) visited the center and operated in it. The open heart surgery operations done in AG in the period from its inauguration in 1998 till 2007 are summarized in Table 2 below. 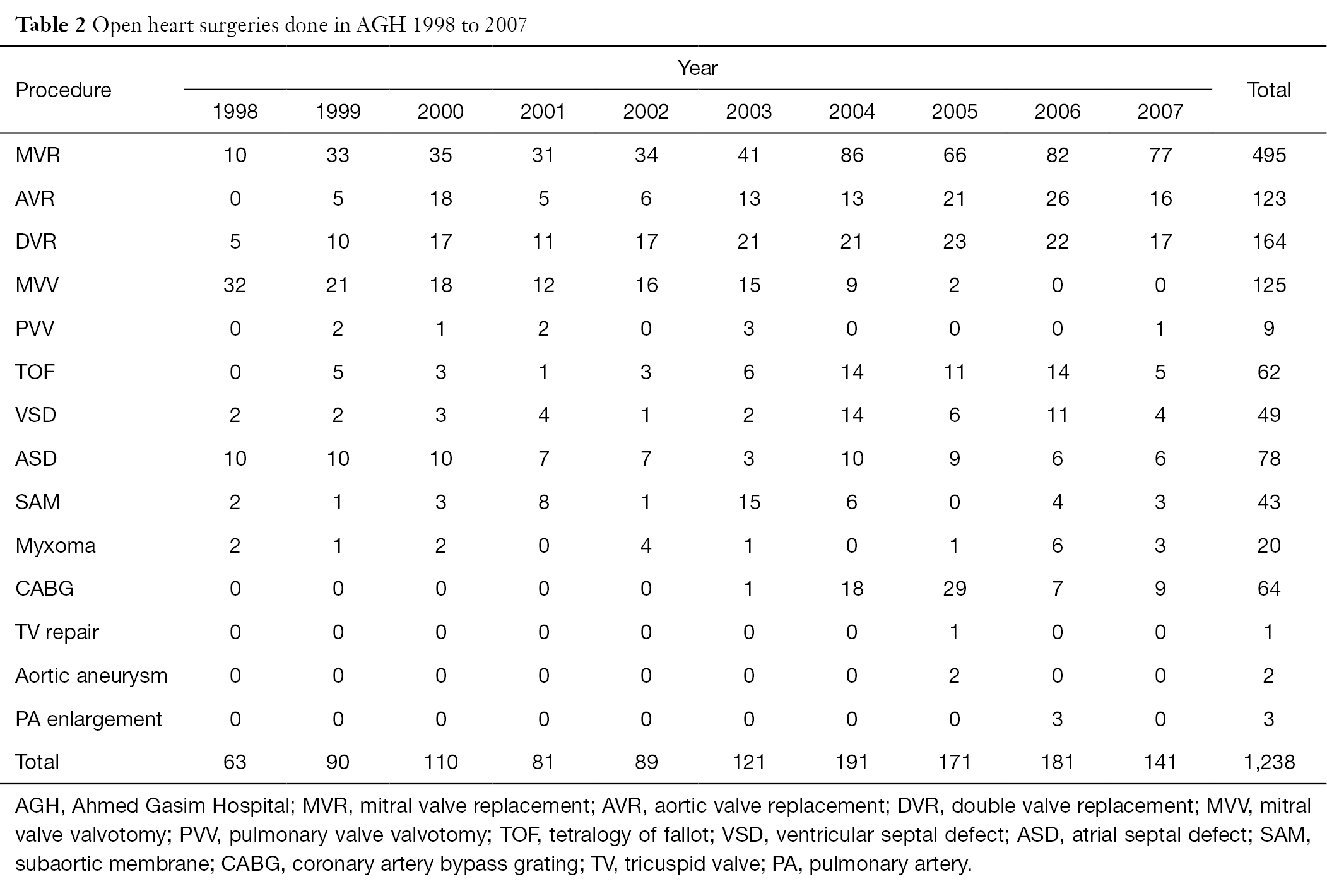 SHC was the second hospital in the most recent era to start doing open heart surgery. It was commissioned as a private company partnership between the Military Medical Corps affiliate and a foreign benevolent donor. It was inaugurated in February 2000 when a team from the UK together with a Sudanese surgeon who had trained with them did two operations (an ASD closure and a mitral valve replacement). From then on the open heart operations increased rapidly specially from the end of 2002 when a South African surgeon whose special interest was pediatric cardiothoracic surgery joined the center. In 2005 another surgeon joined the team.

During the period from 2000 to 2005 SHC was very active in inviting foreign teams to help it in knowledge and skill transfer and this is reflected in the variety and quantity of cases which saw a rapid increase year after year.

The surgeons operating in SHC and the open heart surgery operations in the period from its inauguration in 2000 till 2007 are summarized in Tables 3 and 4 below. 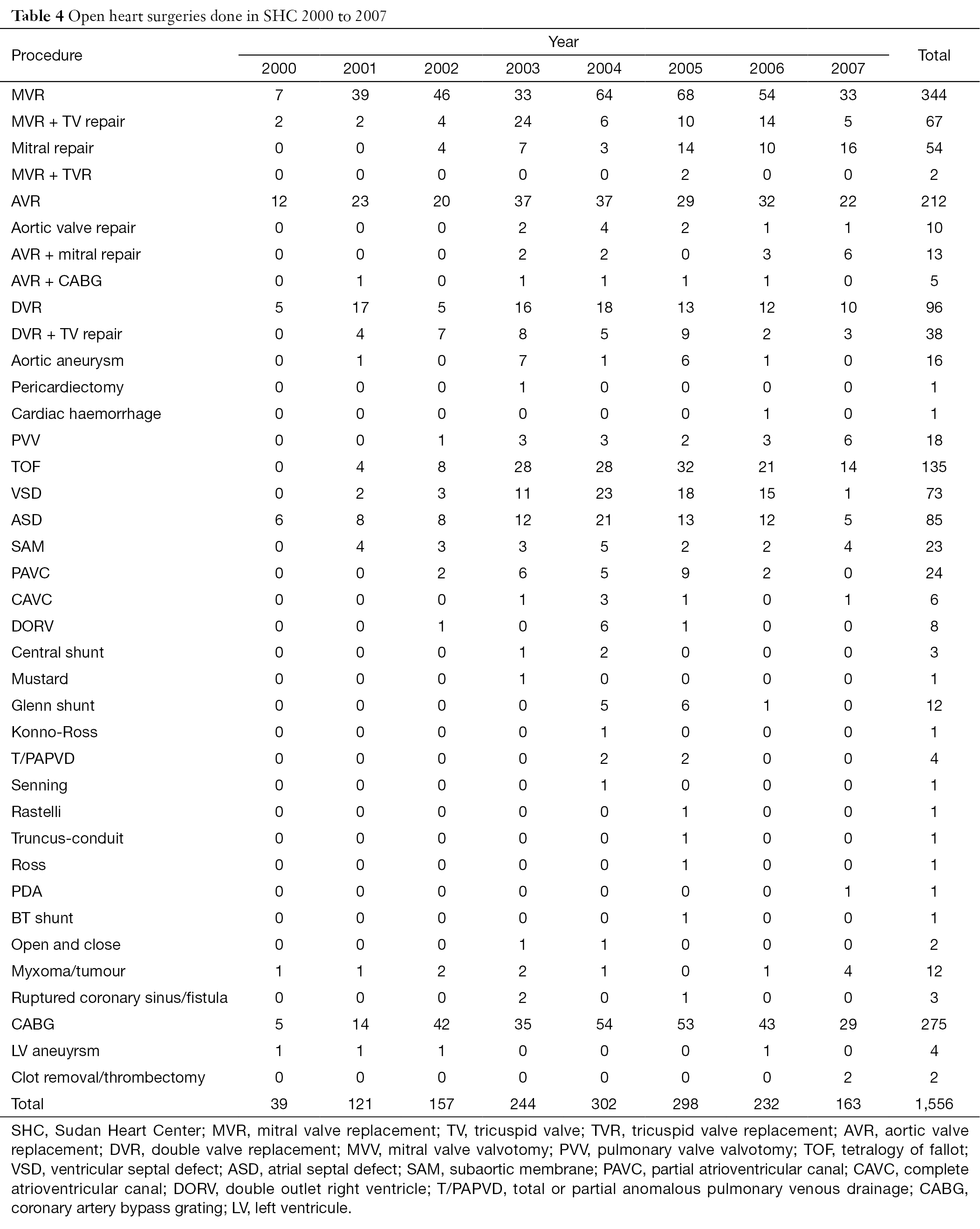 ATH located in Khartoum city center was where cardiothoracic surgery originally started in 1959 but due to a multitude of factors it stopped in the late 1980s. However it continued doing thoracic and oesophageal cases (together with neurosurgery-the other surgical speciality located in it) till 2002 when open heart surgery restarted again with one surgeon.

Sum of all activity

In collating the above data and looking at the case mix (see Figure 2 below) valvular diseases comprise just below 63% out of the total workload (1,800 out of 2,868) followed by congenital heart diseases at nearly 23% (650 cases) and then ischaemic heart diseases at about 12% (339 cases) and lastly other cases forming 2% only (59 cases). 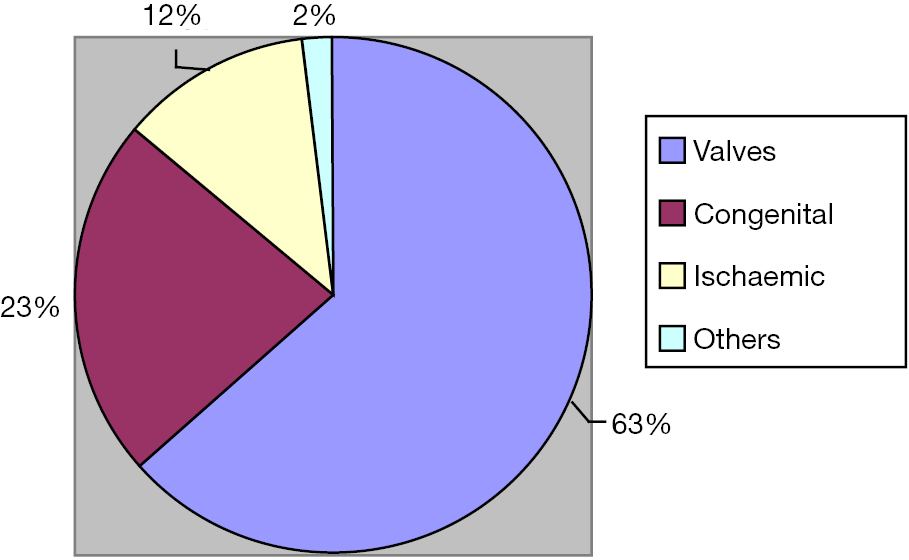 So there is no doubt that although ischaemic heart diseases are present and increasing in number valvular heart diseases (overwhelmingly rheumatic in aetiology) constitutes the major burden in the period studied (this however is changing in more recent times).

The valvular lesion distribution is as shown if Figure 3 and as can be seen is predominantly mitral in origin comprising more than 62% of all valve operations. 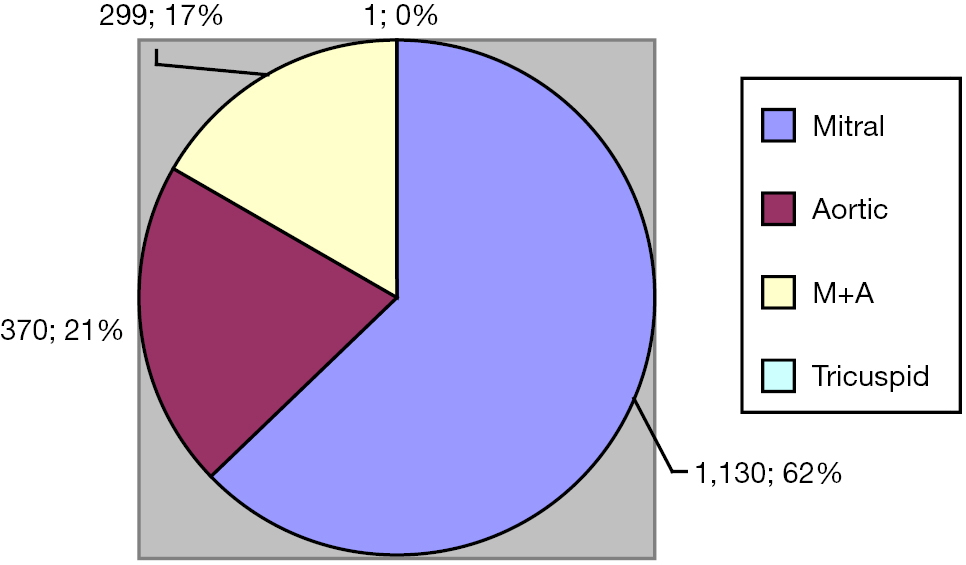 After an initial start in the period from 1959 to 1993 and a lull from 1993 to 1998 heart surgery actively started again in Sudan. In the period from 1998 to 2007, 2,868 open heart operations were done in the three centers in Khartoum (addition of Tables 2,4 and 6) which works out as an average of 284.8 operations per year. If we take an average of 33 million inhabitants in the period (based on the Sudan national Census of 1993 and 2009) then we would have an average over the study period of about nine operations per million of population which would be only 5% of the world average according to Cox’s estimate (6). In other words Sudan would need about 20 times the cardiac services it had during the study period to cater for its population.

In saying so when one takes the gradual growth of the three centers over the period and after it and the addition of Wad Medani Center and Alsalaam center it would be safe to assume that this target is on its way to being achieved.

Open heart surgery was re-established in Sudan in the period from 1998. Although Sudan is comparatively better then the surrounding countries in terms of its open heart surgery services, it still needs to increase the service provided to adequately cater for its population.

Ethical Statement: No research ethics committees were present in both of the hospitals. The authors were staff in all the hospitals surveyed at the time and some of the work presented was their own and they obtained consent from the hospital managers at the time to collate the rest of the data.