Hypertrophic cardiomyopathy (HCM) is the most common chromosomal abnormal heart disease with an incidence of about 1:500 (1). It is the most common cause of sudden cardiac death in adolescents and athletes, and it’s also a risk factor for heart failure and stroke (2,3). The pathophysiological mechanism of HCM is complex with regards to that the genotype, clinical phenotype and prognosis are highly heterogeneous. The clinical features of HCM include asymmetric left atrial hypertrophy, abnormal myocardial energy metabolism, microcirculatory ischemia, cardiac muscle fibrosis, diastolic dysfunction and arrhythmia (4). The early detection of HCM is very important for the timely treatment intervention.

Recently, several studies (5,6) have found that elevated levels of soluble ST2 (sST2) in patients with chronic systolic heart failure is a novel biomarker that enhances risk stratification. ST2 is a member of the interleukin-1 receptor family glycoprotein, which is widely involved in the process of myocardial remodeling (7). However, the role of sST2 in patients with HCM remains unclear. Galectin-3 (Gal-3) is a lectin secreted by activated macrophages and it’s bound to beta galactose (8). It’s been reported that Gal-3 is involved in multiple pathophysiological processes of heart failure, including myocardial fibrosis, inflammation, and myocardial remodeling (9,10). A clinical study (11) has found that the Gal-3 level is an independent predictor of all-cause death and re-admission in patients with heart failure. Myocardial interstitial fibrosis and left ventricular diastolic function are impaired in patients with HCM (12), it’s reasonable to assume that sST2 and Gal-3 may be participated in the progress of HCM. Therefore, we aimed to evaluate the roles of sST2 and Gal-3 in patients with HCM and to assess its correlation with clinical outcomes in patients with HCM undergoing ventricular septal myectomy.

This present study has been checked and approved by the ethics committee of Beijing Anzhen Hospital (No. 20161086).

HCM patients who underwent modified Morrow surgery in our hospital during June 2016–June 2018 were selected as study subjects. HCM was defined as significant left ventricular wall segmental hypertrophy, left ventricular end-diastolic maximum wall thickness ≥15 mm, the other systemic or localized diseases that can cause ventricular hypertrophy should be excluded. The indications for ventricular septal myectomy were: the effects of drug treatment were undesired, left or lower left ventricular outflow/left ventricular pressure gradient ≥50 mmHg at rest. The patients were excluded if the patients had history of cardiac surgery, myocardial ablation or severe liver and renal insufficiency. Our study was complied with the Declaration of Helsinki and was approved by the Ethics Committees of the participating hospitals. All patients provided written, informed consent.

Furthermore, we also selected 125 volunteers without heart disease for medical examination as normal controls with matched gender and age, we attempted to compare the differences of sST2 and Gal-3 levels in those two groups. All the patients were undergone five months period of follow-up, and all the related procedures were conducted in this present hospital.

All blood samples were obtained in a fasting state on the morning of surgery day. Routine biochemistry was analyzed in the central laboratory of our hospital. The patient’s total cholesterol (TC), triglyceride (TG), low-density lipoprotein cholesterol (LDL-C), NT-proBNP, and cardiac troponin I (cTnI) levels were detected and analyzed using commercially available assay (Henshe Diagnostics, Shanghai, China). The blood samples for the measurement of sST2 were collected in pyrogen-free tubes containing ethylenediaminetetraacetic acid and further measured by enzyme-linked immunosorbent assay with corresponding bioanalysis kits (x28408 and x29505, Xihui, China). All the procedures were conducted in comply with the related guidelines. The biochemical analyses were performed blindly.

The characteristics of included HCM patients

A total of 125 HCM patients were included in this present study. Patients with HCM were divided into three groups based on the tertiles of sST2 level: low sST2 group (<10.02 ng/mL), medium sST2 group (10.02 to 15.98 ng/mL), and high sST2 group (>15.98 ng/mL). No significant difference was detected in the age, gender, complicated diseases, drug use, blood laboratory results and echocardiographic analysis among the three sST2-stratified groups. The baseline characteristics of patients stratified by sST2 tertiles are presented in Table 1. 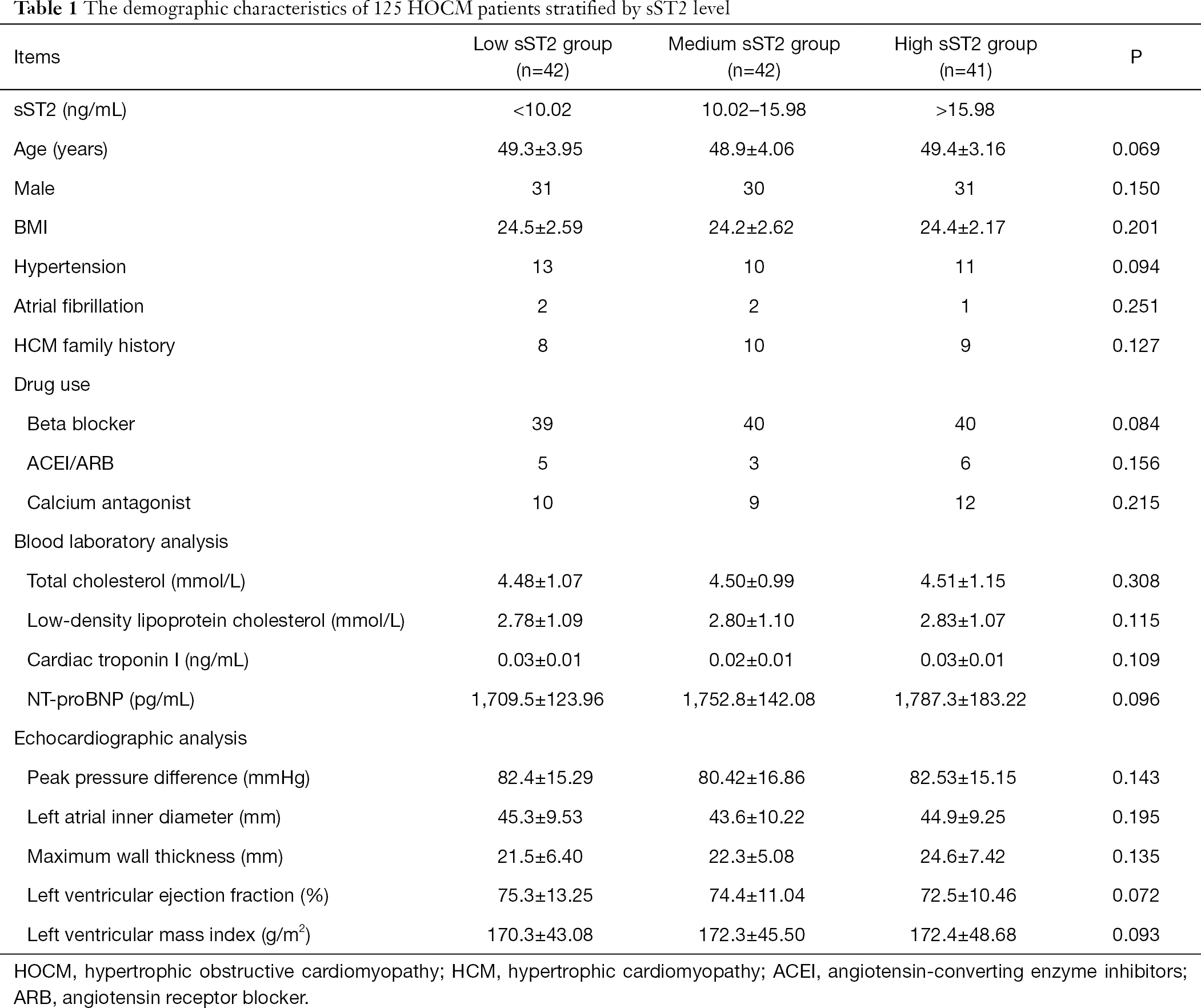 Meanwhile, patients with HCM were divided into three groups according to the tertiles of Gal-3 level: low Gal-3 group (<7.15 ng/mL), medium Gal-3 group (7.15 to 9.04 ng/mL), and high Gal-3 group (>9.04 ng/mL). No significant difference was detected in the age, gender, complicated diseases, drug use, blood laboratory results and echocardiographic analysis among the three Gal-3-stratified groups. The baseline characteristics of patients stratified by Gal-3 tertiles are presented in Table 2. 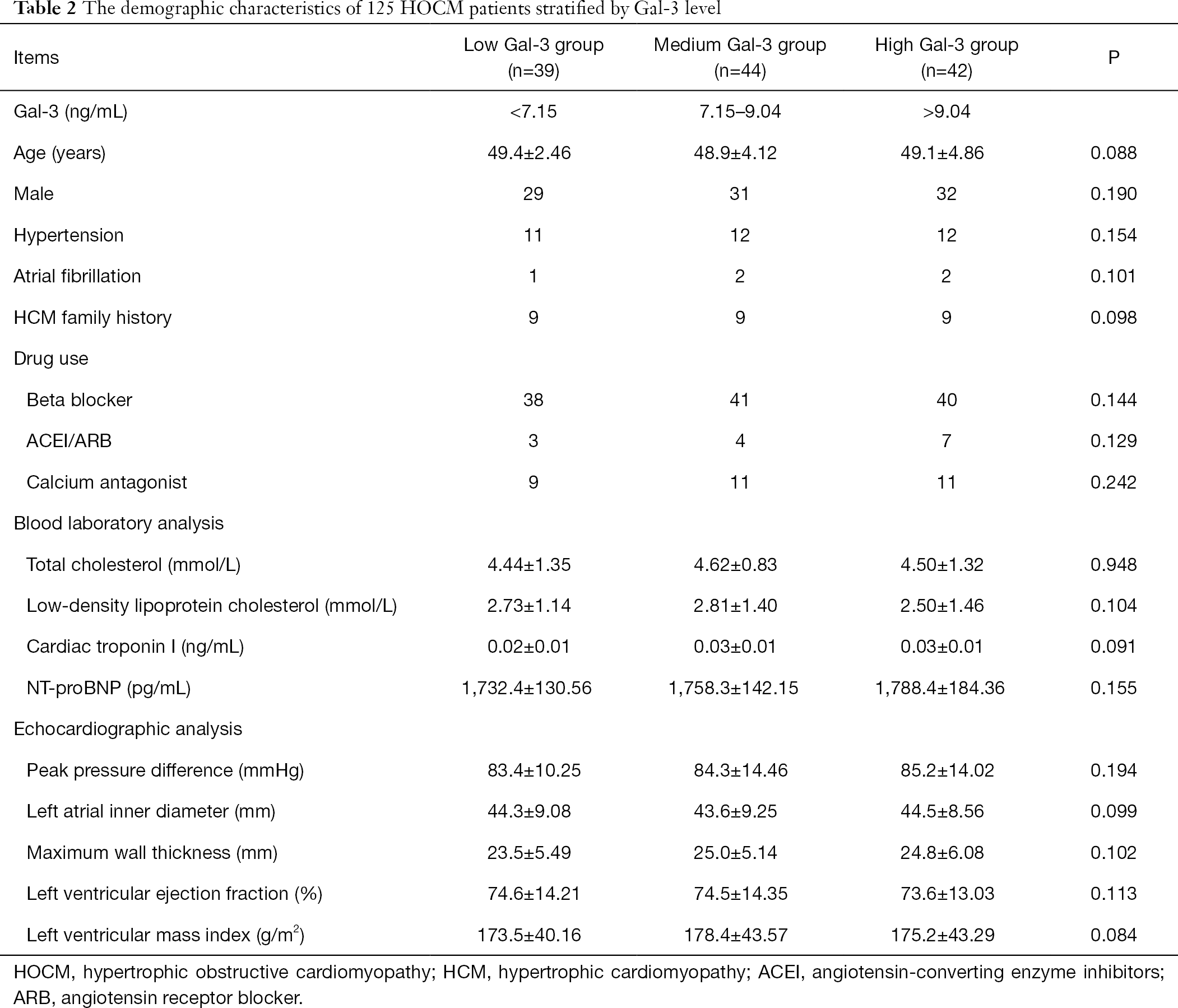 The sST2 and Gal-3 differences between HCM and control group

As Figure 1 presented, the sST2 and Gal-3 levels in HCM patients were significantly higher than that in control group (all P<0.001). 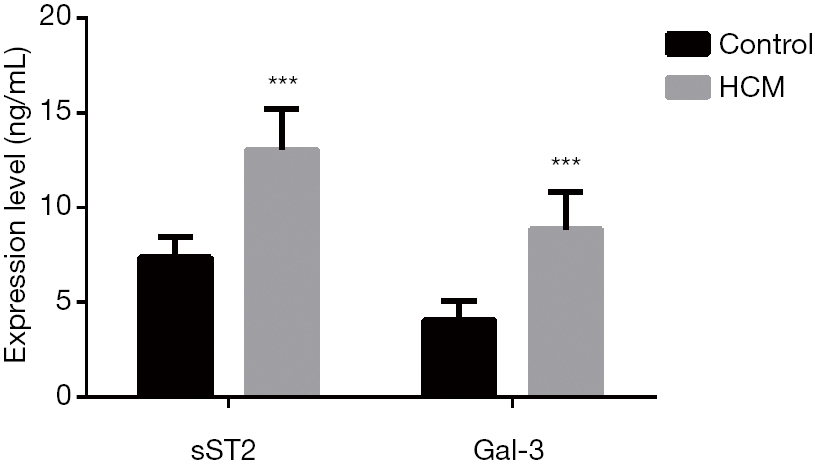 The Kaplan-Meier survival analysis showed that there were significant differences in the incidence of all-cause mortality for HCM patients stratified by the sST2 and Gal-3 levels (log-rank P=0.032 and 0.09, respectively, Figure 2).

Correlations between sST2 and clinical prognosis

As a kind of heart diseases, HCM is a serious threat to human life (13). For the HCM patients that medications may not effective in relieving symptoms, myocardial resection has been proven to be a safe and effective treatment, which can significantly improve the clinical symptoms and cardiac function (14,15). Exploring the risk factors for clinical events in patients with HCM after ventricular septal myectomy will help to guide postoperative management (16,17). The presence of myocardial fibrosis in HCM patients has been confirmed by reports of myocardial biopsy (18), and it has been found to be an independent predictor of major clinical endpoints in HCM patients (19). In recent years, it has been found (20,21) that both ST2 and Gal-3 are involved in myocardial fibrosis and myocardial remodeling, which may be very promising new biomarkers for cardiovascular disease. This present study has demonstrated that the sST2 and Gal-3 levels enhance risk stratification and predict clinical events based on established risk factors. This study showed that the level of sST2 and Gal-3 are significantly elevated in HCM patients, even rough a follow-up of 12 months revealed no correlation between sST2 and Gal-3 levels and clinical outcomes in patients with HCM after ventricular septal myectomy, and only maximum wall thickness is an independent predictor of the composite endpoint of all-cause death in patients with HCM after ventricular septal myocardial resection, the sST2 and Gal-3 levels may provide potentially valuable reference for HCM treatment.

sST2 is a member of the interleukin-1 receptor family that competes with the ST2L ligand in the cardiac IL-33/ST2L signaling pathway (22,23). It inhibits cardio protection and anti-fibrosis of IL-33/ST2L signaling pathway by binding to IL-33 receptor. In recent years, many studies (24,25) have found that sST2 in plasma is significantly elevated in patients with heart failure and is closely related to the prognosis of heart failure. Besides, as a new cardiac marker, sST2 has been reported to be involved in the activation of cardiac fibroblasts and myocardial fibrosis (26). Meanwhile, it’s been reported that sST2 may be involved in the pathological process of myocardial fibrosis or myocardial remodeling mainly by regulating the degradation process of type I collagen (27). Previous studies have shown that for patients with chronic systolic heart failure, the baseline sST2 levels can increase the predictive value of clinical outcomes on the basis of natriuretic peptides, and continuous monitoring of ST2 levels can also predict patients' clinical outcomes (28). Still, the studies on the role of sST2 in HCM patients are very few, mores studies are warranted in identifying the role sST2.

Gal-3 is a chimeric galectin that can be expressed in a variety of tissues and cells, and interacts with various ligands such as collagen, fibronectin, integrin and laminin in cells and matrix (29). It’s been found that Gal-3 is widely active in inflammatory cells, Gal-3 binds to integrin to mediate cell adhesion (30), promote adhesion of macrophages and vascular endothelial cells (31), accelerate the proliferation and metastasis of smooth muscle cells (32), and accelerate the pathological changes of coronary plaques (33). Previous studies (34,35) have shown that Galectin-3 is highly expressed in unstable regions of mouse and human arterial plaques, it’s been well-believed that it relates to the progress of cardiovascular disease. It’s been found that patients with heart failure with Gal-3 levels >17.8 ng/mL were significantly more likely to be hospitalized for heart failure (36). In this present study, the sST2 and Gal-3 levels were not associated with clinical events in patients with HCM after ventricular septal myectomy, it may be explained that most HCM patients undergoing ventricular septal myectomy have a significant improvement in heart function, significant association results may be obtained if being analyzed in the populations of more severely-injurious population (37,38).

Several limitations should be concerned in this study. Firstly, the study sample is rather small, its statistical effects may be not enough to detect the correlation of sST2, Gal-3 levels and clinical prognosis of HCM patients, we are continuing to collect the related information to reach a larger sample size in the future. And HCM undergoing ventricular septal myomectomy is thought to be hypertrophic obstructive cardiomyopathy. The part of obstruction and the change of pressure gradient at obstructive site after ventricular septal myomectomy are important for prognosis. We attempted to include this data at the initial design, yet the most related data are missing, therefore, we cannot include this data. Secondly, due to the resource limitation, we only conducted one-year long follow-up for HCM patients, the longer all-cause mortality remains unclear, there is possibility that the sST2, Gal-3 level can predict the risk of longer period of all-cause mortality. Thirdly, we only detected the level of sST2, Gal-3 in one timepoint, the sST2, Gal-3 level after surgery should also be analyzed whenever possible, the changes of sST2, Gal-3 expression may be related to the effects of surgical treatment, which needs further investigation.

In conclusion, the results of this study indicated that sST2 and Gal-3 were not associated with all-cause mortality of patients with HCM undergoing ventricular septal myectomy, sST2 and Gal-3 provides limited clinical value for risk stratification in this population. However, our study do has some limitations, further studies are warranted to identify the role of sST2 and Gal-3 in cardiovascular diseases.

Conflicts of Interest: All authors have completed the ICMJE uniform disclosure form (available at http://dx.doi.org/10.21037/cdt.2020.01.04). The authors have no conflicts of interest to declare.

Ethical Statement: The authors are accountable for all aspects of the work in ensuring that questions related to the accuracy or integrity of any part of the work are appropriately investigated and resolved. This present study has been checked and approved by the ethics committee of Beijing Anzhen Hospital (No. 20161086).