Immunoglobulin light-chain amyloidosis (AL) is the most common of all systemic amyloidosis subtypes, accounting for approximately 70% of all amyloidosis cases (1). Cardiac amyloidosis (CA) occurs in up to 80% of systemic AL patients and therefore represents one the most important clinical manifestations (1,2). Amyloid deposition in the heart typically presents as restrictive cardiomyopathy and often occurs with disproportionate signs of right ventricular (RV) failure (3). Clinically, RV function has been shown to have prognostic value in a variety of congenital abnormalities, pulmonary hypertension and dilated cardiomyopathy (4-8). Therefore, early detection of RV dysfunction is vital for determining the prognosis of AL patients.

To determine RV dysfunction early, 3D speckle-tracking echocardiography and cardiac magnetic resonance (CMR) tissue tracking have been regarded as early and sensitive makers for assessing subclinical deformations of both left ventricular (LV) and RV (9-15). However, CMR imaging is considered the gold standard technique for RV evaluation (16,17) and could be used to detect subclinical changes in myocardial mechanics early in patients with RV deformation (18) due to the low spatial resolution and difficult acoustic windows (19,20) of echocardiography. To the best of our knowledge, a few studies have evaluated LV dysfunction using CMR tissue tracking or tagging techniques in patients with AL (21,22), and RV deformation assessment with CMR tissue tracking has not yet been reported in the literature. Thus, the aims of this study were (I) to assess and compare RV deformation in AL patients, especially those with preserved RV ejection fraction, and (II) further identify the most potent prognostic index of RV myocardial strain for all-cause mortality in AL patients.

This study was approved by our institutional review board. We retrospectively considered 71 consecutive AL patients (34 females and 37 males, mean age 59±10.2 years old, range 25–81 years old) who had CMR examinations from 1 October 2014 through 31 March 2017. As Jaccard et al. (23) previously described, the diagnosis of amyloidosis was made based on a biopsy of subcutaneous fat or an involved organ with the demonstration of typical Conge red birefringence under polarized light. Amyloidosis was further confirmed by the detection of a monoclonal protein in the serum or urine and/or a monoclonal population of plasma cells in the bone marrow. The exclusion criteria were as follows: (I) patients with congenital heart disease, primary cardiomyopathy such as hypertrophic cardiomyopathy or coronary artery disease (n=1); (II) patients with poor quality CMR images (n=2); (III) patients with arrhythmia (n=2); and (IV) patients with pulmonary hypertension (n=2). Finally, the study group consisted of 64 patients (28 females and 36 males, mean age 58±12.8 years old, range 25–81 years old). Patients selection flow diagram shows in Figure 1. According to A Consensus Opinion From the 10th International Symposium on Amyloid and Amyloidosis, CA was defined as an LV thickness >12 mm without another known cause, as shown by echocardiography (24). A total of twenty age- and sex-matched healthy controls (8 females and 12 males, mean age 54±12.1 years old, range 24–75 years old) were enrolled as the normal control group. None of the included individuals had a history of heart diseases, systemic hypertension, or diabetes. 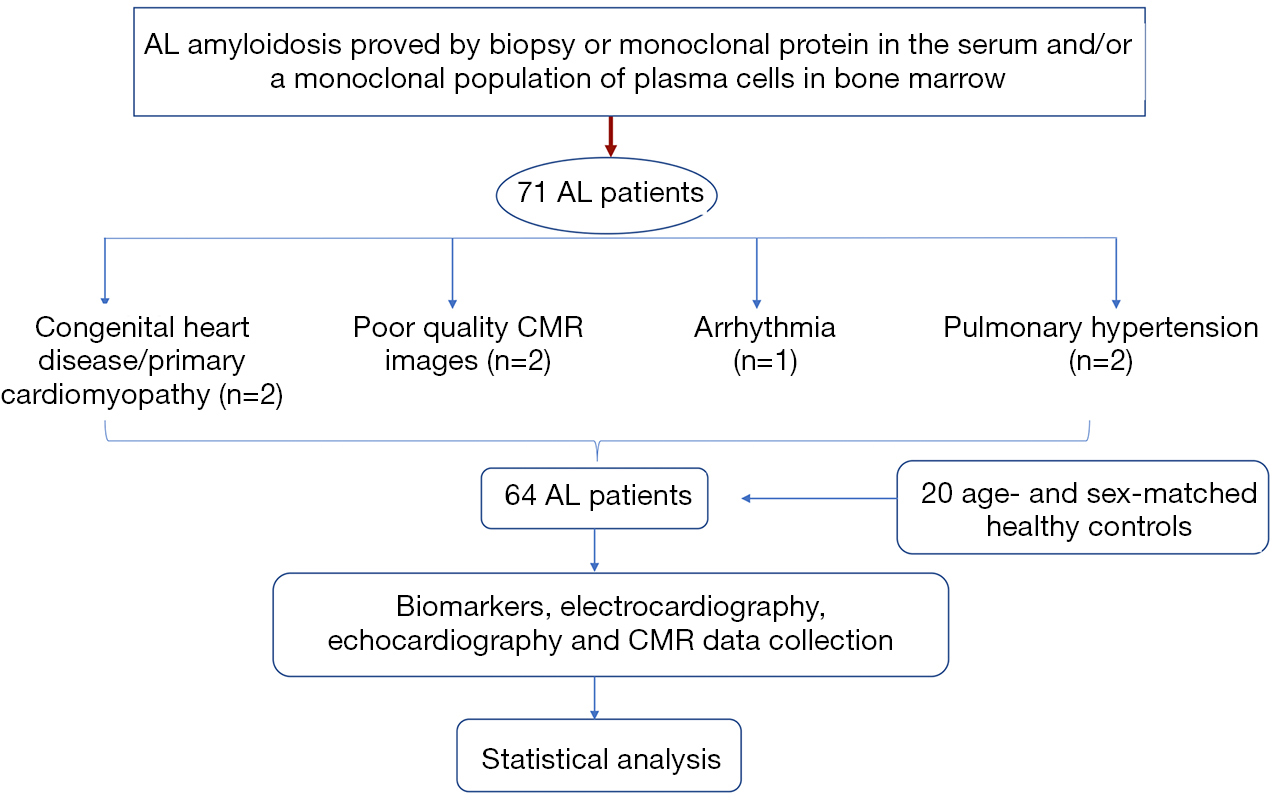 In patients with AL amyloidosis, blood was collected within a week of CMR examination for the measurement of N-terminal pro-brain natriuretic peptide (NT-proBNP) and cardiac troponin T. Standard 12-lead resting electrocardiography (ECG) was performed in all patients prior to the CMR examination. All patients included in the study were examined by standard echocardiography before undergoing CMR focused on LV parameters.

CMR studies were analysed offline by an experienced observer blinded to all patients clinical data using customized software (cvi42; version5.9.3; Circle Cardiovascular Imaging, Inc., Calgary, Canada). The endocardial and epicardial traces were performed manually in serial short-axis slices at the end-diastolic and end-systolic phases, and the papillary muscles and moderator bands were carefully excluded from the analysis. Global LV/RV systolic function, including the LV/RV end-diastolic volume index (EDVi), end-systolic volume index (ESVi), and LV/RV ejection fraction (EF), were computed. Subsequently, LV myocardial strain analysis was performed by loaded the long-axis two-chamber, four-chamber and short-axis slices into the tissue tracking module. The analysis of RV myocardial strain was performed by loading the images of four-chamber and short-axis slices into the RV tissue tracking module. In all series, the endocardial and epicardial contours were delineated manually per slice at end-diastole. The global myocardial strain parameters were acquired automatically, including the global radial peak strain (GRPS), global circumferential peak strain (GCPS), and global longitudinal peak strain (GLPS) (Figure 2). Positive and negative symbols represent direction. We defined peak strain as the absolute maximum strain over the entire cardiac cycle. The diagnosis of myocardium late gadolinium enhancement (LGE) was obtained by visual assessment, which required viewing an elevated signal in the myocardium within two orthogonal views. 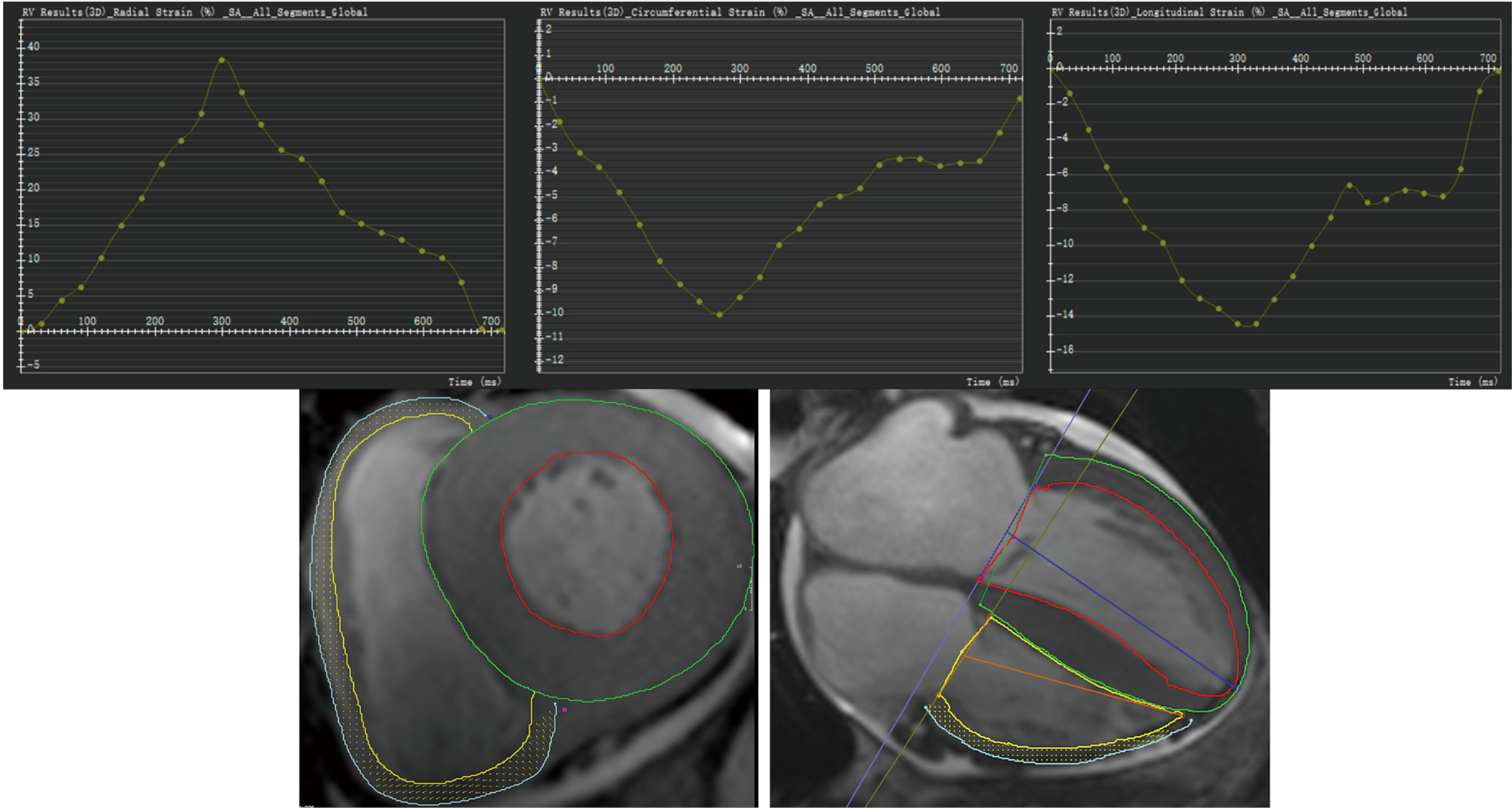 The primary outcome was all-cause mortality after a review of hospital records or via a telephone call to the patient or their families. The follow-up was closed on 31 November 2018. The follow-up time was 20 months or until the occurrence of events. The time-to-event was defined as the time between CMR imaging and death.

All statistical analyses were performed using a commercially available software package (SPSS for Windows, version 25.0; SPSS Inc, Chicago, IL; GraphPad version 7.00; San Diego, CA; and MedCalc, Version 9.3.0.0. MedCalc Software; Mariakerke, Belgium). All data were evaluated for normal distribution using the Kolmogorov-Smirnov test. Homogeneity of variance was evaluated using Levene’s test. All results are expressed as the mean ± SD or median [interquartile range (IQR), 25–75%]. Independent samples t-tests and Mann-Whitney U tests were used to evaluate CMR parameters and the baseline characteristics of the normal and AL subgroups. Group percentages were compared using the Chi-square test or Fisher’s exact test, where appropriate. Pearson correlation analysis was performed to examine the correlation between RV and LV global peak strain. Intra- and inter-observer variability were assessed using the intraclass correlation coefficient (ICC) method, and the 26 patient results are presented as Cronbach’s α and 95% limits of agreement. Univariate and multivariate analyses were used to predict all-cause mortality in AL patients. NT-proBNP and troponin T were log (ln)-transformed to achieve normality for further analysis. Patients were divided into two groups by the median RV-GRPS. Kaplan-Meier survival curves were constructed to estimate the cumulative event rate for each end point according to the high or low RV-GRPS subgroup. The log-rank test was used to compare Kaplan-Meier survival curves. Statistical significance was considered a 2-tailed P<0.05.

Baseline characteristics, biomarkers, ECG results and echocardiography parameters were recorded and are summarized in Table 1. Among the 64 AL patients, 1 had hypertension, 2 had diabetes, and 10 had a low-voltage by electrocardiography. Echocardiography examination found that tricuspid regurgitation and mitral regurgitation were observed in 9 and 12 patients, respectively. Laboratory tests showed that serum NT-proBNP and troponin T concentrations were 5,815.1 (2,090.5–13,667.1) pg/mL and 83.5 (43.9–219.4) µg/L, respectively. There were 9 patients took Beta-blockers and 4 took cardiac glycosides. Thirty-nine patients received chemotherapy and only four patients received stem cell transplantation. 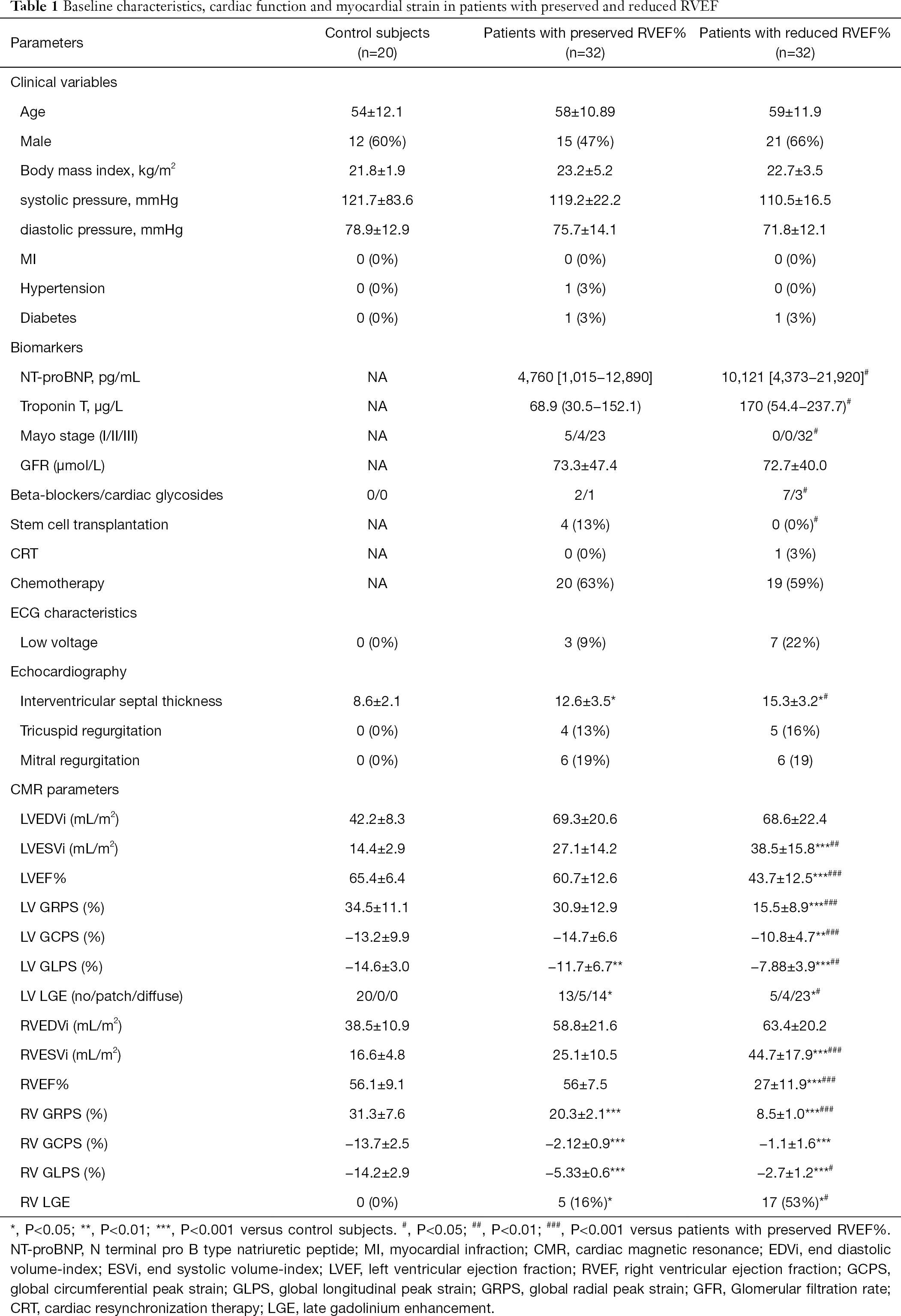 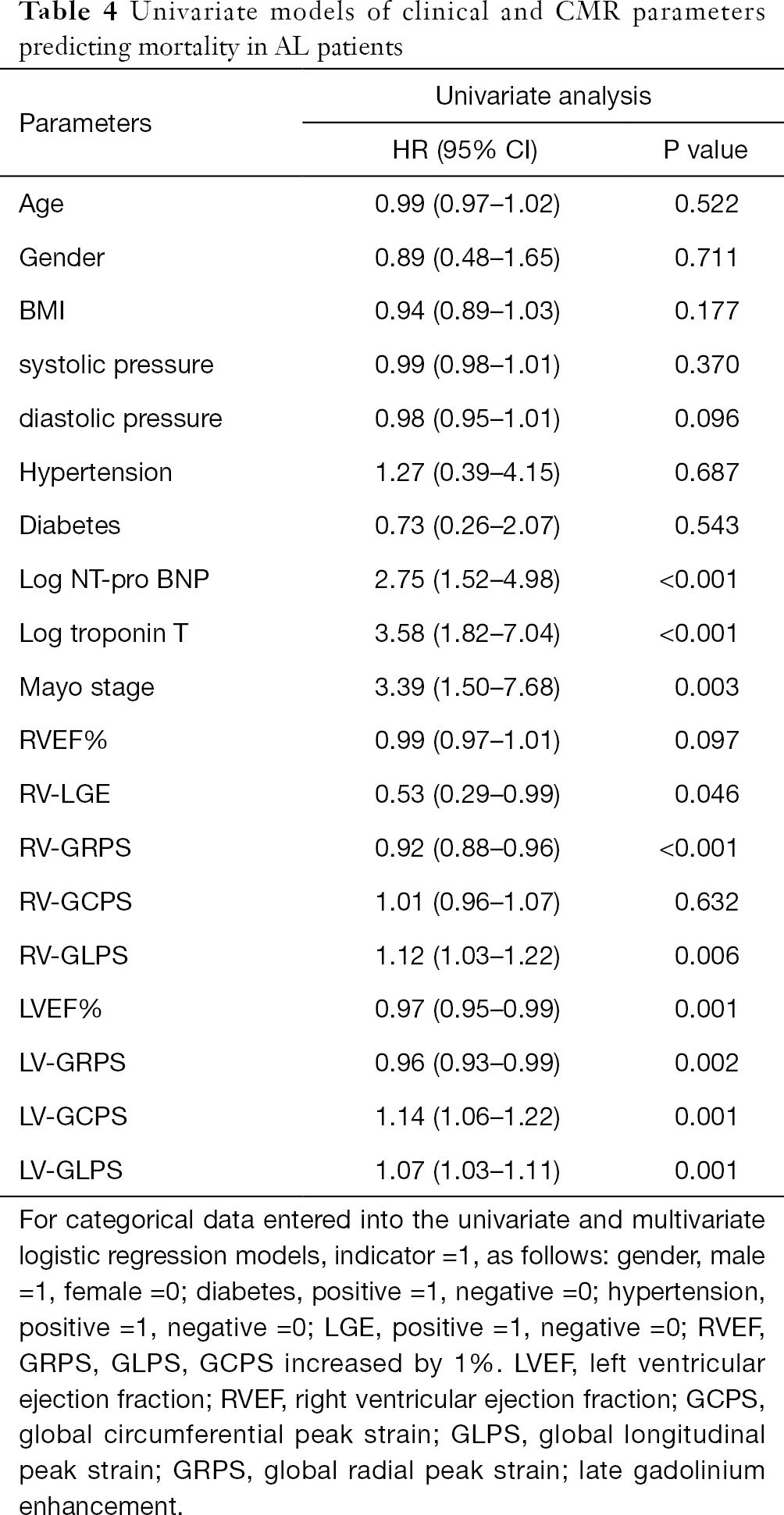 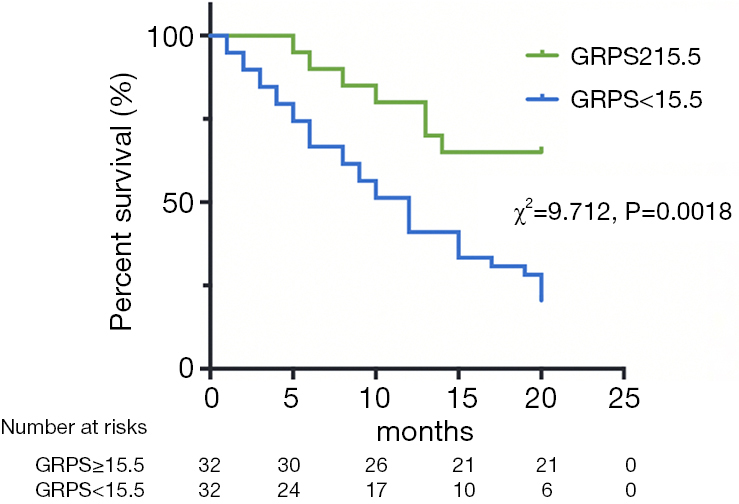 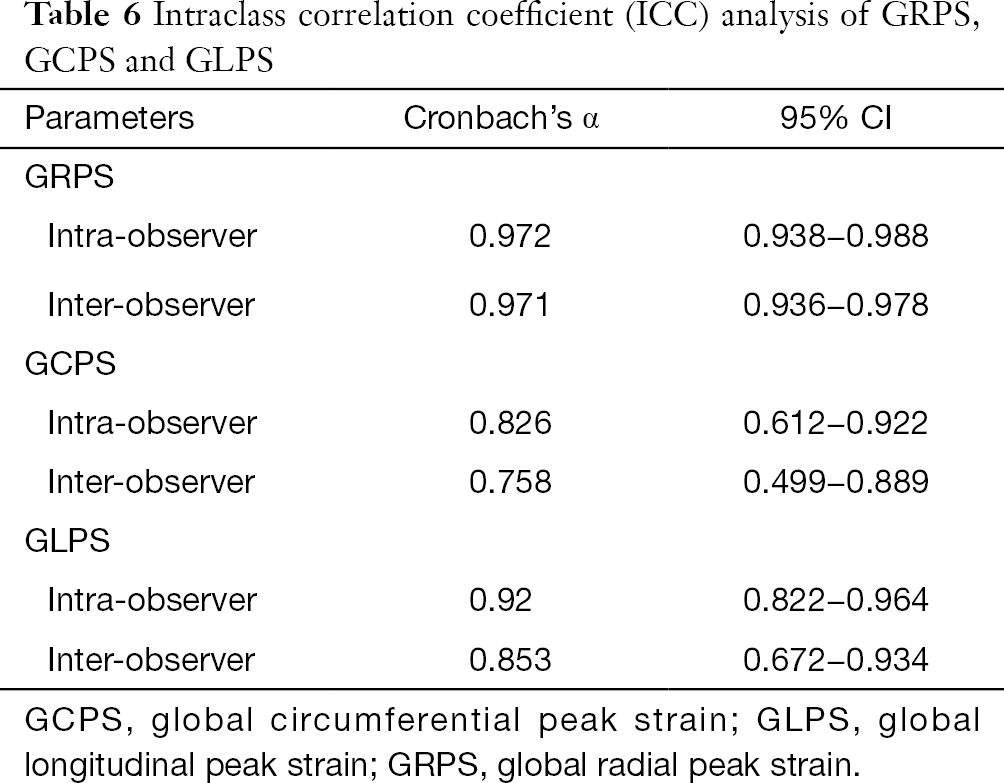 The main findings of the present study indicate that RV strain derived from CMR tissue tracking may be vital for the early diagnosis of subclinical RV involvement in AL patients, especially in AL patients with preserved RVEF. More importantly, besides the traditional prognostic value of Mayo stage, we also found the RV GRPS and Mayo stage contributed significant prognostic information in AL patients after adjusting for LV parameters and traditional RV parameters, including RVEF and RV LGE.

In AL patients, RV heart failure often represents the late stage of the disease, in which a narrow therapeutic time window remains available. AL patients with impaired systolic function are considered inappropriate for autologous stem cell transplantation, which is generally accepted as a therapeutic approach to improve the survival rate and quality of life in AL amyloidosis (26,27). Thus, early assessment of RV deformation plays a key role in therapeutic decision-making and prognosis evaluation in AL patients. As demonstrated in Cappelli’s study, RV longitudinal strain was significantly lower in AL patients with CA than in controls but remined normal in patients without CA (18). Accordingly, the present study also showed that patients with CA or RV LGE had lower RV strain than was found in patients without CA. Some studies have suggested that RV strain is correlated with LV filling pressure (28), and because of its anatomical position, the interventricular septum has been identified as a key element in ventricular interactions (29). In the correlation analysis performed in our study, there was a moderate correlation of GRPS and GLPS between LV and RV.

Interestingly, unlike in the LV, in which circumferential strain is more reproducible (36), in our study, we found that reproducibility measurements were moderate for RV-GCPS. We speculate that this finding is related to the anatomical structure of the RV, which is mainly composed of shallow myocardial layers that are arranged annularly and the deep myocardium, which is arranged longitudinally. This is a new finding with regard for the evaluation of RV deformation by 3D motion analysis but still require more research to verify.

There are some limitations to our study. First, the myocardium of the RV is too thin, and this makes it difficult to track the inner and outer myocardial membranes. However, because of the deposition of amyloidosis, AL patients have a greater RV myocardial thickness than is found in patients with other diseases. This makes it much easier to track the RV myocardial membranes in AL patients. Second, the follow-up time of 20 month may have been too short in the current study though previous studies have reported that clinical outcomes are poor in untreated AL, in which the median survival is only 6 to 15 months (37). Finally, we did not assess T1 mapping or extracellular volume in the present study, which are well-known prognostic indicators (38,39). However, as myocardial strain is an early marker of myocardial deformation, tissue tracking could detect RV deformation in the early stage of disease and easy to obtain.

Our findings demonstrate that the use of RV global strain evaluated by CMR tissue tracking in AL patients may be useful for the assessment of RV deformation. CMR RV strain tended to decrease in subclinical CA patients prior to RVEF reduction and provided valuable information for the early diagnosis of RV involvement. Moreover, RV-GRPS and Mayo stage served as a predictive factors for all-cause mortality in AL patients.

Conflicts of Interest: All authors have completed the ICMJE uniform disclosure form (available at http://dx.doi.org/10.21037/cdt.2020.01.03). The authors have no conflicts of interest to declare.

Ethical Statement: All authors are accountable for all aspects of the work in ensuring that questions related to the accuracy or integrity of any part of the work are appropriately investigated and resolved. This study was approved by our institutional review board (No. 2019-756).