Heart failure (HF) is a major public health problem in the world. The incidence of HF in developed countries is approximately 1–2% (1). Based on different ejection fractions (EFs), HF is divided into HF with reduced EF (HFrEF) and HF with preserved EF (HFpEF). According to statistics, HF is diagnosed in 5.1 million adults in the United States (2), at least 50% of whom are diagnosed with HFrEF [left ventricular (LV) EF <40%] (3). The most common cause of HFrEF is ischemic heart disease, which accounts for approximately 60% of all cases (3). Compared with patients without HF, coronary heart disease (CHD) patients with HF have more clinical complications and higher incidences of bleeding and recurrent myocardial infarction; additionally, the treatments are inadequate, and the mortality is high (4). The prognosis of CHD patients with HFrEF is also significantly worse than that of non-CHD patients with HFrEF (5,6). Therefore, how to effectively treat these patients is a topic worthy of exploring.

Many retrospective studies have shown that viable myocardium in the LV is an important predictor of whether patients with ischemic HF can benefit from coronary artery bypass grafting (CABG). On the other hand, the subgroup analysis in the surgical treatment for ischemic heart failure (STICH) trial suggested that viable myocardium had nothing to do with surgical benefits. In addition, many researchers believed that except for viable myocardium, the severity of LV remodeling is also an important indicator for assessing the efficacy of CABG. Therefore, the role of myocardial viability and LV remodeling and the interactions between them in CABG are not clear.

CHD patients with symptoms and signs of HF and an LVEF <40% (determined by transthoracic ultrasonography) who were admitted to Ward 11 of the Department of Cardiac Surgery, Beijing Anzhen Hospital, from January 2014 to February 2018 were enrolled consecutively in this study. All patients had signed informed consent after admission.The exclusion criteria were patients with cardiogenic shock; patients with acute myocardial infarction within 3 months; and patients who need concurrent aortic valve surgery. According to the viable myocardium ratio, the patients were divided into two groups: (I) high myocardial viability (HMV): a ratio of viable to total myocardium in the LV ≥10%; and (II) low myocardial viability (LMV): a ratio of viable to total myocardium in the LV <10%. In addition, the patients were further divided into four subgroups according to the mean LV end-systolic volume index (LVESVI): (I) HMV with small LV (LVESVI <92 mL/m2), (II) HMV with large LV (LVESVI ≥92 mL/m2), (III) LMV with small LV (LVESVI <92 mL/m2), and (IV) LMV with large LV (LVESVI ≥92 mL/m2). All patients used the following agents for more than a year: nitrates, aspirin, betaloc, statins and angiotensin-converting enzyme inhibitors (ACEIs) or angiotensin II receptor blockers (ARBs).

Determination of LVEF and LVESV

Two sonographers performed transthoracic echocardiography to determine the LVEF and LVESV before surgery. Patients with an EF <40% that was confirmed by the two sonographers were enrolled. If there was disagreement between the two sonographers regarding an EF, a third sonographer repeated the examination and confirmed the results. LVESV was the average of the two measurements. The LVESVI was obtained by normalizing the LVESV to the body surface area of the patient.

This is a single center, prospective, observational study. SPSS 25.0 software was used for statistical analyses. The baseline characteristics of the groups were compared using Student’s t-test for continuous variables and the χ2 statistic for categorical variables. Continuous variables were reported as mean with standard deviation and categorical variables were reported as percentage. Survival analysis was analyzed using Kaplan-Meier method. P<0.05 was considered statistically significant.

Follow-up was performed for 75 patients in the HMV group and 35 patients in the LMV group with a mean period of 30±12 months. The 12-, 24-, 36-month MACE-free survival rate of patients with HMV was significantly higher than that of patients with LMV (HMV vs. LMV: 96.9% vs. 88.6%, 93.4% vs. 85.5%, 79.4% vs. 68.2%, P=0.004, Figure 1A). There was no difference in MACE-free survival between patients with different degrees of LV remodeling within each group (Figure 1B,C). Patients with a high ratio of viable myocardium had a better prognosis, and the severity of LV remodeling did not affect the long-term prognosis of patients. The details of MACEs are shown in Tables 7,8. 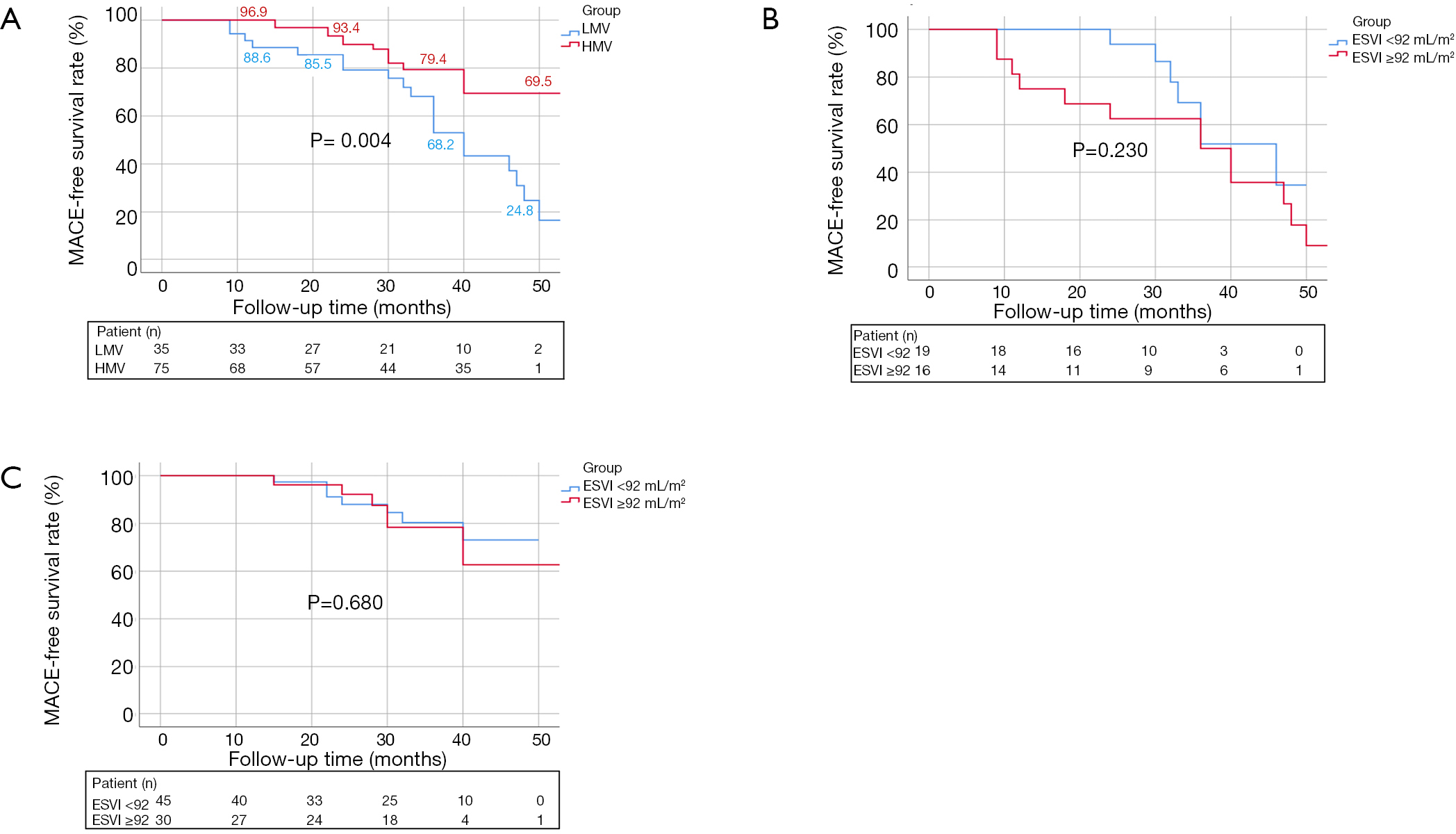 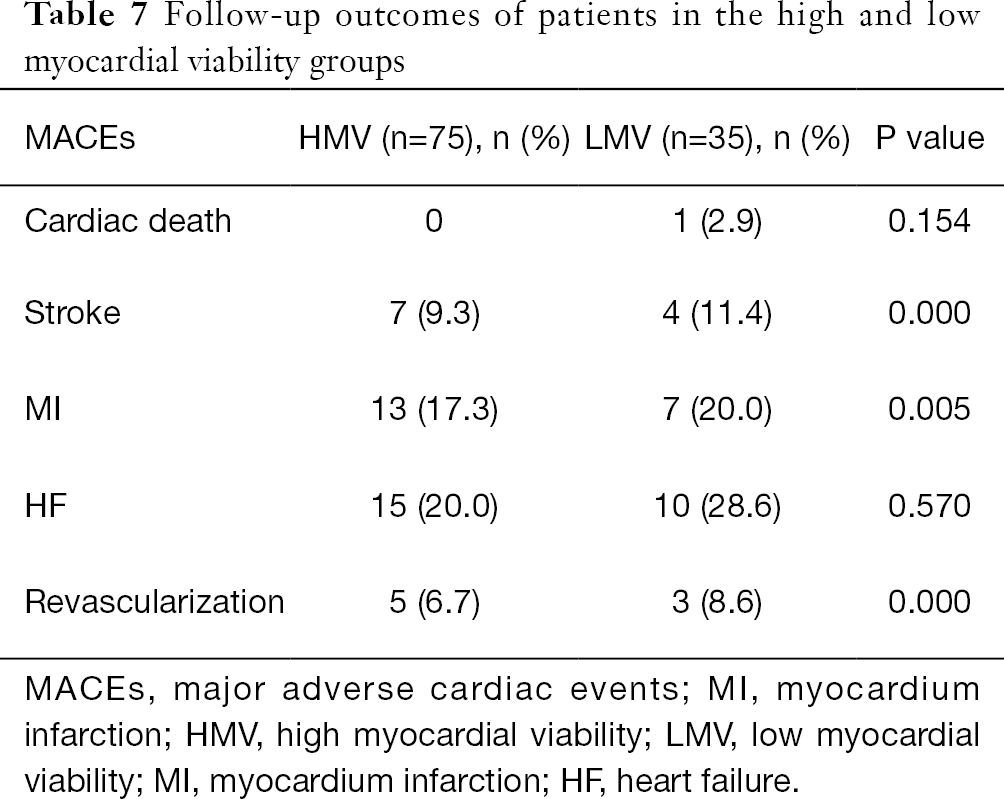 Beginning with the pioneers Isom and Baird (9,10), cardiac surgeons have made sustained efforts to reduce the surgery mortality of CHD patients with LV dysfunction. In the 1970s and 1980s, the mortality rates were 15% and 10%, respectively. Currently, the mortality rate is less than 5% for CHD patients with an EF between 10% and 30% who undergo CABG (10-16). For the patients enrolled in this study, the average LVEF was 33% (23–39%), and the overall mortality was 6.8% (8/118). The subgroup analysis showed that the operative mortality was 2.2% in patients with a ratio of viable myocardium ≥10% and low LVESVI. This result suggests that these patients are suitable for CABG. However, the operative mortality reached 22.2% in patients with a ratio of viable myocardium <10% and high LVESVI. Determining whether these patients are suitable for CABG requires a joint evaluation with cardiologists to develop an individualized treatment plan. In this current study, there was no significant difference in the LVESVI between the HMV group and the LMV group (91±29 vs. 94±36, P=0.153), but operative mortality, incidence of postoperative AF and percentage of perioperative mechanical assistance were lower in the former than in the latter (3.8% vs. 12.5%, P=0.034; 14.1% vs. 35.0% P=0.011; IABP: 75.0% vs. 47.4% P=0.004; ECMO: 22.5% vs. 1.3%, P<0.010). This suggests that myocardial viability is an important factor that affects operative mortality and complications and should be fully assessed before surgery. In addition, the LVESVI is positively associated with mortality in patients with similar myocardial viabilities and is another important factor that affects operative mortality and complications. Therefore, for CHD patients with HFrEF, a preoperative risk assessment should not only consider the viable myocardium ratio but also consider the severity of LV remodeling.

Limitation of the study

Due to the small sample size in this study, we used 10% as the viable myocardium ratio cut-off value to divide the patients into the low viability and high viability groups; however, two groups were not adequate. When more patients are enrolled in the study, another group, viable myocardium ratio between 10% to 20% will be added. This will further help in understanding the effects of the viable myocardium ratio on perioperative risk and long-term prognosis. Similarly, due to the small sample size in this study, the LVESVI cut-off value was the mean LVESVI, 92 mL/m2. We concluded that LV remodeling does not affect the survival of patients. However, this conclusion may not be accurate. As the sample size increases, we will further scientifically classify the severity of LV remodeling (<60 mL/m2, 60–90 mL/m2, >90 mL/m2) to more rationally evaluate the impact of LV remodeling on perioperative risk and long-term survival.

Conflicts of Interest: All authors have completed the ICMJE uniform disclosure form (available at http://dx.doi.org/10.21037/cdt.2020.01.12). The authors have no conflicts of interest to declare.

Ethical Statement: The authors are accountable for all aspects of the work in ensuring that questions related to the accuracy or integrity of any part of the work are appropriately investigated and resolved. The study was approved by the Institutional Ethics Committee of Beijing Anzhen Hospital (No. 2016024).