Diabetes is a growing epidemic worldwide. As one of the most serious manifestations of the disease, cardiovascular complications has received more and more attention (1,2). Endothelial cell (EC) damage is an initiating factor in the process of vascular complication in diabetes, and high glucose (HG) is involved in the onset and progression of EC damage (3-5). Using transgenic lineage-tracing techniques, previous studies have demonstrated that HG could induce EC damage via endothelial-to-mesenchymal transition (EndMT) (6,7). EndMT could be characterized as the EC lose their endothelial characteristics and gain the mesenchymal phenotype, accompanied by the reduction of the EC markers, such as CD31 and overexpression of mesenchymal cell markers, such as fibroblast-specific protein 1 (FSP1) (8). Multiple studies have demonstrated that EndMT contributed to EC damage (9,10). However, the underlying mechanism of HG-induced EndMT remains unclear.

Ephrin B2 is a member of the largest receptor tyrosine kinases, which plays an important role in vascularization, development, nervous system patterning, cancer and angiogenesis (11). Ephrin B2 is expressed in both endothelial and pericyte cells (12,13), and is important for cell-cell communication (14). Recently, Ephrin B2 has been further found to be associated with EC damage (15). In addition, numerous studies have reported that inhibition of Ephrin B2 might prevent epithelial injury via epithelial-to-mesenchymal transition (EMT) (15,16). As we known, EndMT is classified as a specialized form of EMT (17). These findings suggested the participation of Ephrin B2 in EC damage. Interestingly, it remains unclear whether Ephrin B2 was involved in HG induced EC damage.

Therefore, we hypothesized that HG could induce EC damage via an Ephrin B2-dependent pathway in human aortic ECs (HAECs). In this study, we examine the effects of HG on EndMT in vivo and investigate the underlying mechanism of Ephrin B2 regulation.

Primary HAECs were purchased from ScienCell Research Laboratories (No. 6100) and cultured as previously described (18). Cells at passage 2–5 were selected for this study. At approximately 75% confluence, the culture medium was changed to a serum-free solution for 12 hours prior to their further experiments. To examine the effects of HG on Ephrin B2 and EndMT in HAECs, cells were treated with normal glucose (NG, 5.5 mM), 15 mM D-glucose, 30 mM HG and mannitol (MN, 5.5 mM NG +24.5 mM mannitol) for 48 hours, respectively. Obviously, MN was used as a control hyperosmolarity.

Total RNA was extracted using RNAiso Plus according to the manufacture’s directions (TAKARA). The concentrations and purity of the samples were detected by Nanodrop 2000 (Thermo). A relative absorbance ratio at 260/280 nm between 1.8–2.0 were used. GAPDH was used as reference for normalization. The relative expression of mRNA was detected by the 2–ΔΔCt methods. The primers were presented in Table 1. 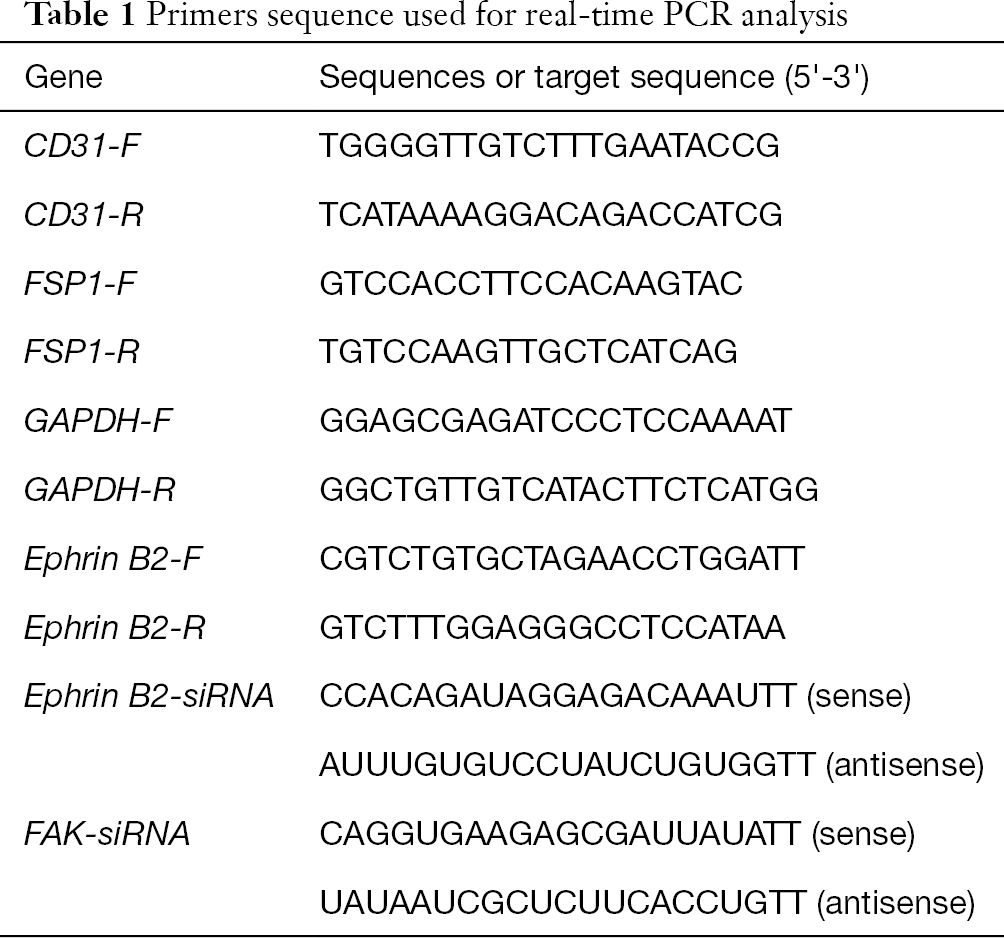 Coverslips were fixed with 4% paraformaldehyde, and blocked with 5% BSA in PBS at room temperature for 30 minutes. Cells were then immunostained with primary antibodies against CD31 (sc-376764, Senta Cruz, 1:250 dilution) at 4 °C overnight. Then the cells were incubated with the fluorescent secondary antibodies (A-31570, Invitrogen, 1:300 dilution) for 1 hour in the dark and finally counterstained with DAPI (G1012, Servicebio).

siRNA targeting Ephrin B2 and FAK were purchased from Genepharm. Transfection reagent Lipo 2000 were purchased from Invitrogen (No. 12566014). On the day before the transfection, HAECs that were in the phase of logarithmic growth were seeded on 6-well plate. Transfections were conducted when the HAECs were cultured approximately 75% confluence. And the cells were transfected based on the transfection reagent manufacturer’s protocol. Briefly, the siRNA and Lipo 2000 were mixed with Opti-MEM (31985070, Gibco) respectively at room temperature before seeding in a well containing serum-free medium. Replacement of Opti-MEM by complete growth media was done at 6 hours post-transfection.

Data were expressed as the means ± standard deviation (SD) and analyzed by one-way analysis of variance (ANOVA) using SPSS version 20.0. Results were considered significant if P<0.05. Experiments were repeated at least three times.

To determine the effects of HG on EndTM, we treated HAECs with HG (30 mM, 48 hours). We observed that HAECs exposed to HG acquired a spindle-shaped morphology reminiscent of the phenotypic changes typically associated with EndMT (Figure 1A). Parallel with the findings above, we performed qTR-PCR and western blot analysis. We found that the endothelial marker CD31 was reduced while the myofibroblast marker FSP1 decreased after HG treatment (Figure 1B,C,D), which was characteristic of EndMT. In addition, we performed immunofluorescence labeling experiments, and observed that HAECs exhibited round cellular morphology. In contrast, cells in the HG group exhibited a spindle-shaped morphology and the expression of CD31 were decreased (Figure 1E). The above results confirmed that HG triggered EndMT in HAECs.

We next examined the expression of Ephrin B2 after HG incubation. As shown in Figure 2A,B,C, the results of the qRT-PCR and western blot indicated that the mRNA and protein levels of Ephrin B2 was up-regulated in HG group.

Figure 2 Effects of high glucose on Ephrin B2 mRNA and protein expression in HAECs. (A) HAECs were cultured with increased glucose (5.5, 15, 30 mM) for 48 hours. Mannitol (MN) was used as a control hyperosmolarity. mRNA levels of Ephrin B2 were detected by qRT-PCR. (B) Representative blots for Ephrin B2. (C) Graphic presentation. Data were exhibited as means ± SD. *, P<0.05 vs. NG or MN. **, P<0.01 vs. NG or MN. Experiments were repeated five times. HAECs, human aortic endothelial cells; NG, normal glucose.

To confirmed the role of Ephrin B2 in HG induced EndMT, HAECs were incubated with HG in the presence of absence of the Ephrin B2 siRNA. As shown in Figure 3A,B,C, the results of the qRT-PCR and western blot revealed that Ephrin B2 siRNA transfection could effectively decreased the expression of Ephrin B2. In addition, we found a significant decrease in CD31 expression while an increase in FSP1 in HG+Ephrin B2 siRNA group compared to the HG group. These data suggested that HG-induced EndMT might be partially mediated by Ephrin B2.

To gain further insight into the mechanism involved in HG-induced EndMT, we examined the expression of FAK and phosphorylated FAK (pho-FAK) in HAECs treated with HG and Ephrin B2 siRNA. As shown in Figure 4A,B, the protein levels of FAK and pho-FAK were increased in HG group compared with the NG group. Moreover, the administration of Ephrin B2 siRNA largely blocked the FAK and pho-FAK expression after HG incubation. These results suggest that FAK pathway could be activated after HG incubation, while the blocking of Ephrin B2 suppressed the HG-induced FAK pathway.

We further evaluated the influence of FAK pathway on the markers related to EndMT in HAECs. As shown in Figure 5A,B, the FAK siRNA significantly decreased the FAK expression. In addition, FAK siRNA largely prevented the protein levels of FSP1 and improved CD31 expression. That’s to say, the inhibition of FAK prevented HG-induced EndMT of HAECs.

Hyperglycemia induces endothelial injury by producing lots of multiple protein, which serve roles in EndMT. Yu et al. identified that HG-induced EndMT in HAECs was mediated by TGF-β (19). Shang et al. proved that NOD2 promoted EndMT in glomerular ECs in diabetes (20). The results of our study demonstrated that HG-induced EndMT was accompanied by increased Ephrin B2 expression. In addition, blockade of Ephrin B2 by siRNA were found to significantly inhibit EndMT. These results came in agreement with the study that showed an increased expression of Ephrin B2 in proliferative angiogenesis as in diabetic retinopathy and tumors (12). Recently, Xiong et al. found Ephrin B2 inhibition markedly attenuated EC damage (15). Taken together, these findings showed a crucial role for Ephrin B2 activation in EC injury in diabetes.

Previous studies demonstrated that Ephrin B2 activation triggers different intracellular pathways. Liu et al. showed that PI3K/AKT and PLC-γ/PKC signaling pathway is involved in Ephrin B2 activation in tumor cells (21). Vrahnas et al. proved that Ephrin B2 suppresses autophagy in osteocytes through a Rho-ROCK-dependent pathway (22). Das et al. found that Ephrin B2 promote chemotaxis of ECs through Erk phosphorylation and KLF2 up-regulation (23). In our current study, we further evaluated whether the FAK pathway is implicated in Ephrin B2-mediated ECs in HAECs treated with HG. As the data show, we observed that Ephrin B2 siRNA could partially attenuate the HG-induced FAK activation in HAECs. Then, we found that blockage of FAK could further inhibit EndMT with HG. FAK was a widely expressed non-receptor protein tyrosine kinase, which regulated several biological processes (e.g., cell adhesion, migration and angiogenesis) and controlled the epithelial morphology (24). Previous studies showed that activated FAK pathway could promote EMT in gastric carcinoma cells and colorectal carcinoma cells, which accelerated the cancer progression (16,25). In our present study, FAK might be a downstream effector of the HG-Ephrin B2 pathway and drive EndMT in HAECs. To our knowledge, this is the first study linking HG to Ephrin B2/FAK in vascular disorders under hyperglycemia condition.

In summary, our work showed that Ephrin B2 expression was up-regulated after HG treatment. HG-induced Ephrin B2 signaling triggered EndMT and endothelial damage, which mediated by the downstream FAK pathway (Figure 6). These findings suggest that an improved understanding of the Ephrin B2-dependent pathway might lead to a novel therapeutic target for vascular disease in diabetes.

Conflicts of Interest: All authors have completed the ICMJE uniform disclosure form (available at http://dx.doi.org/10.21037/cdt-20-299). The authors have no conflicts of interest to declare.

Ethical Statement: The authors are accountable for all aspects of the work in ensuring that questions related to the accuracy or integrity of any part of the work are appropriately investigated and resolved. Ethics approval was not required, because this study does not involve patients or animals.