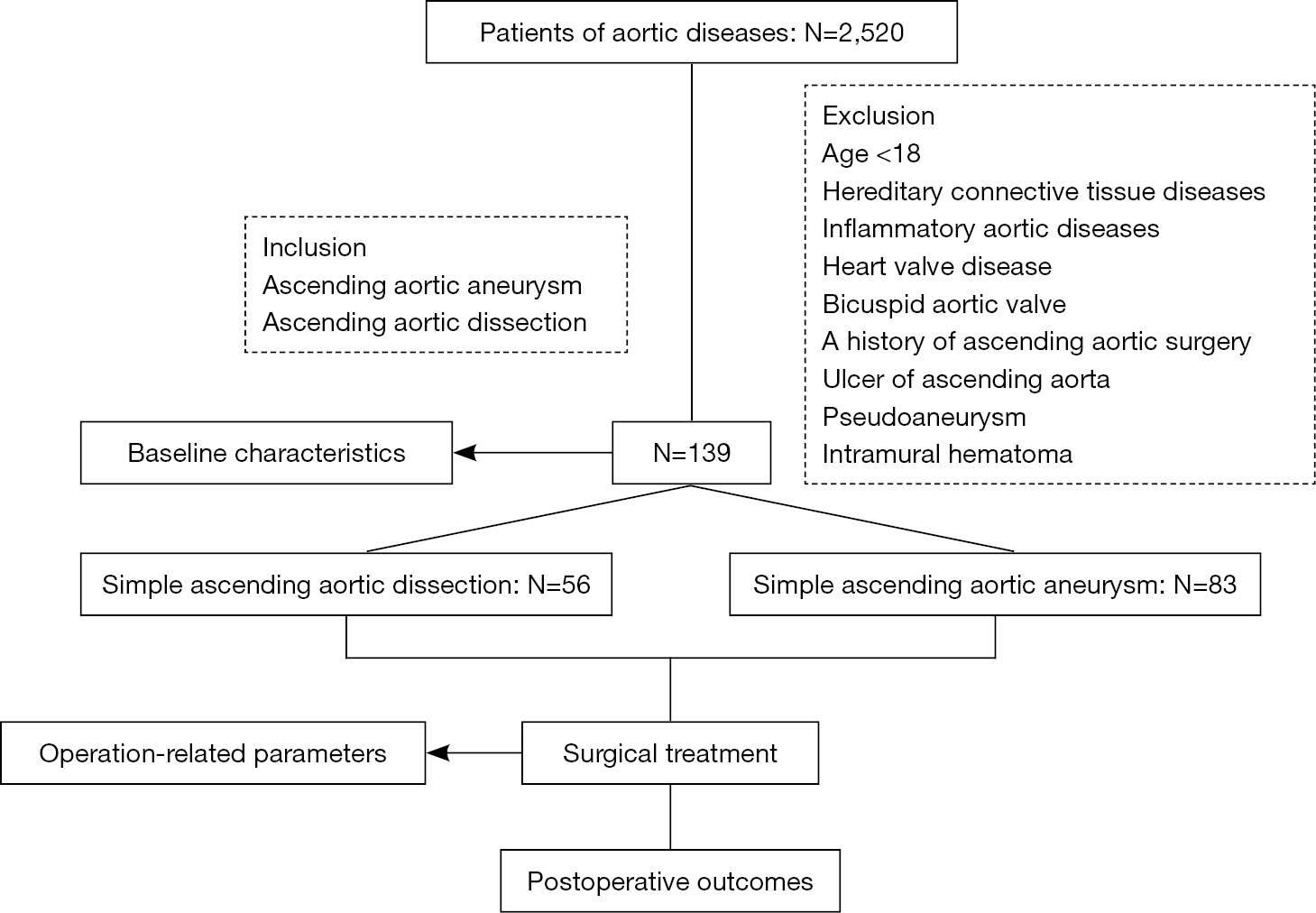 A total of 139 patients met the criteria for inclusion. The comparison of basic data is shown in Table 1. At baseline, The age of patients in the aortic dilation group was 57.27±10.96, the age of patients in the aortic dissection group was 56.93±10.74, the age and the proportion of women in the two groups was similar, in addition, there was no significant statistical difference between the two groups, such as height, weight, body surface area, body mass index, preoperative EF, preoperative LVEDD, preoperative LVESD, left atrial diameter etc. before surgery. 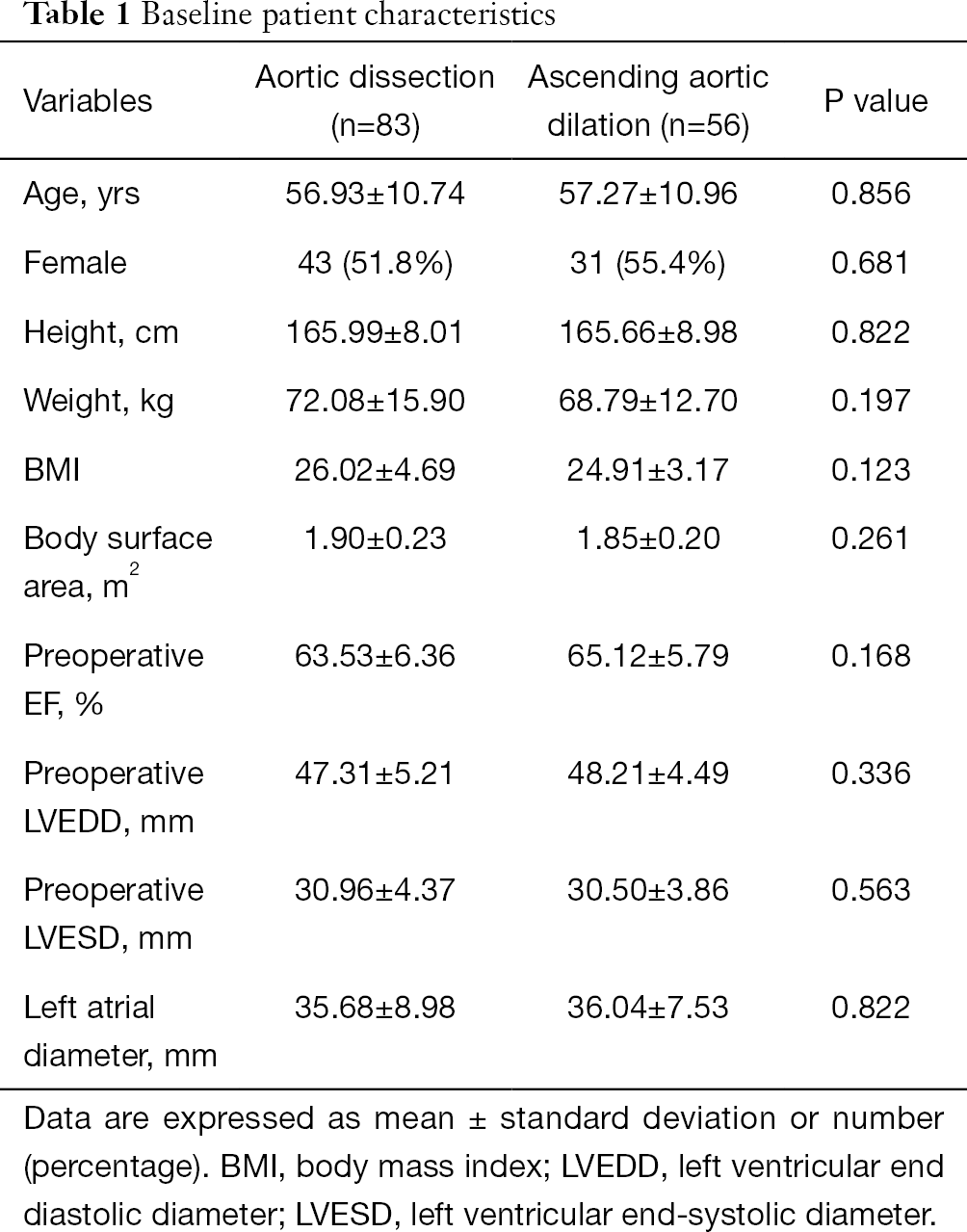 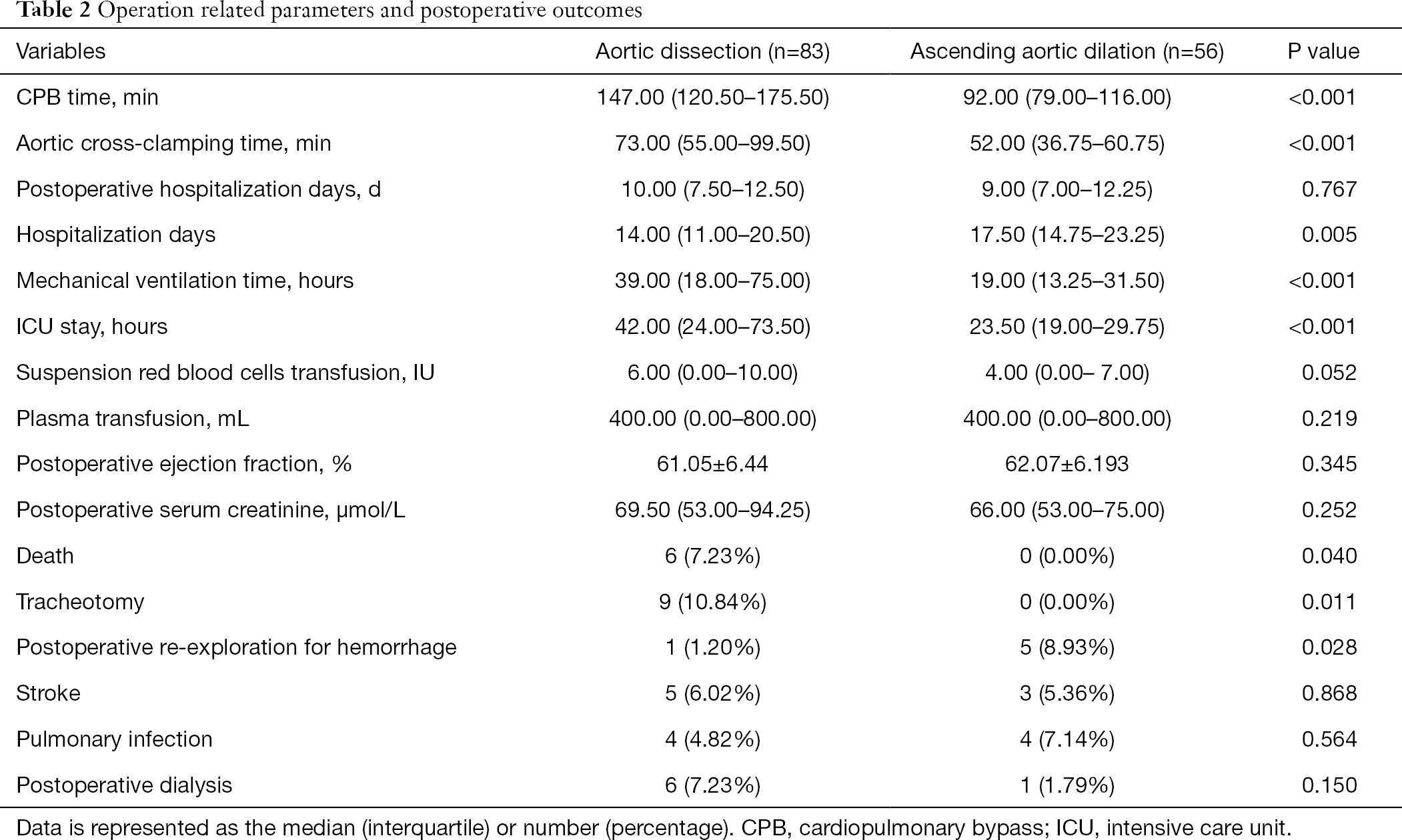 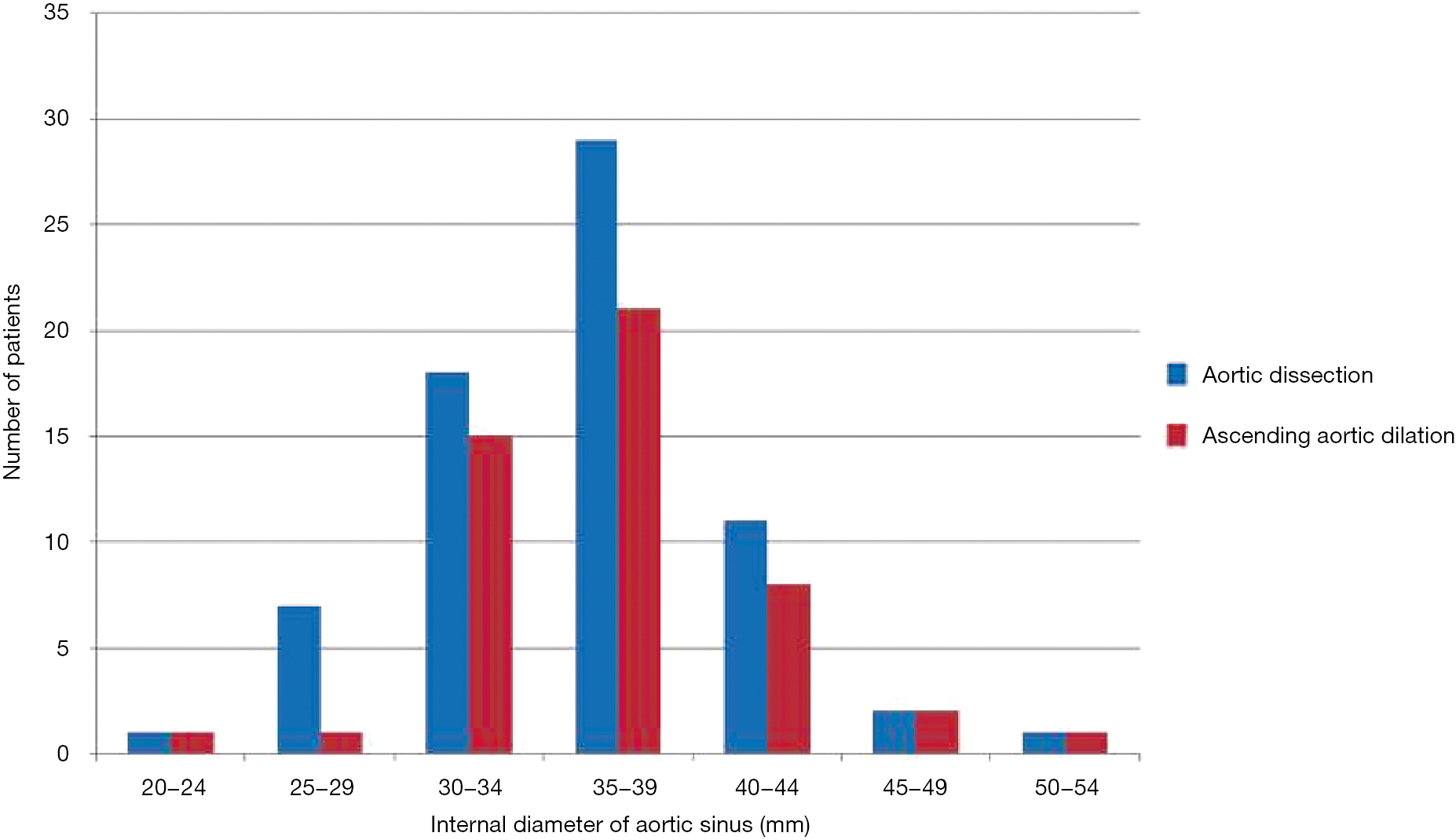 Figure 2 Population distribution of aortic sinus diameter stratified by patients with aortic dissection versus those with ascending aortic dilatation. 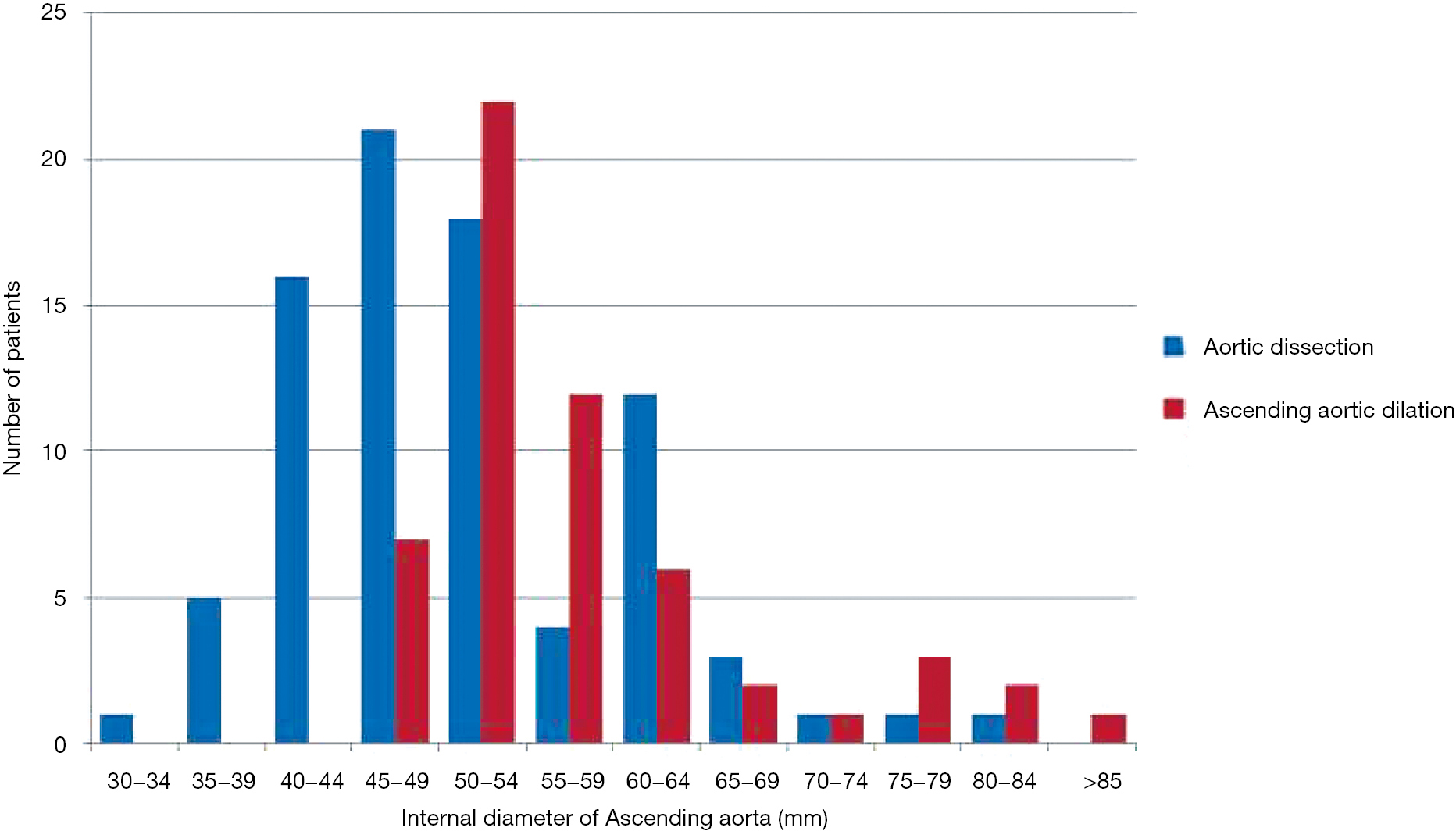 The surgical indication for simple aortic dilation was set in 5.5 cm, which comes from the guideline of American College of Cardiology (ACC), American Heart Association (AHA), Society of Thoracic Surgery (STS) and the American Association for Thoracic Surgery (AATS) in the year of 2010 (8). Coady et al. (9) also put forward a lot of clinical evidence in 1997 to support this surgical indication. The guideline was mainly based on the experience accumulated by clinicians and surgeons, and lacked sufficient evidence support and theoretical basis (10-13). At the same time, the guideline implied that these indications were not absolute, and the influence of many other factors should be considered. The surgical indication for patients with Marfan syndrome was 5 cm, and for patients with additional risk factors, consisting of family history of dissection and severe aortic regurgitation, the indication could be reduced to 4.5 cm (8). As seen from the guidelines, genetic factors, valve disorders and so on had a great influence on surgical indications. So in our study, we excluded the interference caused by genetic factors, inflammation, valve disorders, etc., and chose simple ascending aortic dilation and simple ascending aortic dissection as the subjects for our study. This allowed us to focus on the effect of aortic diameter on indications for ascending aortic dilation and the two groups of patients were more comparable.

Our clinical data from Anzhen Hospital showed that in 83 aortic dissection patients, nearly 73% of the patients were less than 5.5 cm in diameter, and nearly 52% were less than 5 cm. Pape et al. (14) showed similar data in his article in 2007. This article enrolled 591 type A dissection patients (mean age, 60.8 years) from International Registry of Acute Aortic Dissection (IRAD) between 1996 and 2005. It was found that 59% of the patients were less than 5.5 cm in diameter and 40% were less than 5 cm, which was similar to our article. According to our data, most patients in dissection group had diameters <5.5 cm. If current indications were applied, these patients would face the risk of death. For some patients, the diameter of ascending aorta when aortic dissection occurrence was even normal. In clinical practice, we do find that some patients had suffered aortic dissection, although they have a “small aorta” or even less than 3.5 cm. On the contrary, in some patients of aortic dilation, the diameter of ascending aorta sometimes even reaches 8–9 cm and it was still “safe”, so, for these “small aorta” patients, it seems to be necessary to use more radical surgical indications to avoid disastrous aortic diseases, but for some “big aorta” patients, 5.5 cm appears too radical. This fact indicates that it is not enough to rely solely on diameter of the aorta to decide whether or not to operate. It is necessary to find more accurate evaluation indexes for the surgery.

In China, there is no database platform like IRAD yet. It is difficult to summarize the experience of diagnosis and treatment of ascending aortic dilation and hard to get evidence-based medical researches. At present, cardiac surgeons in China rely more on European and American guidelines to guide clinical work. Our existing indications for ascending aortic dilation are also based on these European and American guidelines. As everyone knows, there is a big difference between Chinese and European or American race, so it is necessary to establish an indication of surgery for ascending aortic dilation that belongs to the Chinese. This article is to investigate the diameter of the aorta and the risk of aortic dissection occurrence in Chinese, but there is still a lot of work to do before we have our own guidelines.

There were also some limitations in our article. We excluded the hereditary and inflammatory aortic diseases in the selection of cases, which may be a key to unlock the “silent killer” secrets of the aortic dilation. Besides, it should be noted that our research mostly included only ascending aortic diameters post-dissection, which was known to be roughly 13 mm larger compared to pre-dissection (21). And more than 60% of patients have non-dilated aortas prior to the dissection (22). But the pre-dissection diameter was the real diameter at risk. So, the actual diameter of aorta when aortic dissection occurred was smaller than expected. Did it mean that the current surgical indication was wrong? For ascending aortic dilation, should we adopt a more aggressive surgical strategy? Apart from these, Wu et al. referred that ascending aortic length could serve as a novel predictive factor to evaluate risk of aortic adverse events, which include aortic rupture, aortic dissection and death and raised that aortic elongation of 11 cm should be a new indication for aortic intervention. It is a completely new criterion for aortic surgery and needs to be further verified. We did not assess the quality of this factor in our research because we paid more attention to the existed criterion of surgery. But it certainly should be one of our next research interests to check its effectiveness (23).

In the future, we will further explore the pathogenesis of the aortic dilation. At the same time, the factors that affect the diameter of the aorta in this article only include gender and body surface area, and there are still some other factors that are not involved. This is the problem we need to further study in the future.

Thanks to the collection of clinical data used in this paper by Haiyang Li, Ming Gong, Xiaolong Wang and others.

Reporting Checklist: The authors have completed the STROBE reporting checklist. Available at http://dx.doi.org/10.21037/cdt-20-313

Conflicts of Interest: All authors have completed the ICMJE uniform disclosure form (available at http://dx.doi.org/10.21037/cdt-20-313). The authors have no conflicts of interest to declare.

Ethical Statement: The authors are accountable for all aspects of the work in ensuring that questions related to the accuracy or integrity of any part of the work are appropriately investigated and resolved. The trial was conducted in accordance with the Declaration of Helsinki. The study was approved by the Ethics Committee of Beijing Anzhen Hospital (Institutional Review Board File 2014019), and informed consent was taken from all the patients.