In recent years, heart failure has been a serious clinical problem all over the world, which threatens the life of a large population of patients with cardiovascular heart diseases (1,2). It has been well-established that cardiomyocyte apoptosis is associated with the various cellular events in heart failure (3,4). Programmed cell death (apoptosis) of cardiac muscle cells has been identified as an essential process in the progression to heart failure. Specifically, cardiomyocyte apoptosis, that is closely related to the clinical severity of dilated cardiomyopathy, could act as a feature of heart failure (5,6). Accumulative evidences suggest the critical role of cell apoptosis in heart failure, which urges us to explore the therapeutic methods to prevent apoptosis.

In recent years, researchers are paying growing efforts in the identification of various microRNAs (miRNAs) in the treatment or diagnostics of heart failure. miRNAs are small non-coding NA with 22 to 25 nucleotides, which inhibit the target protein translation expression via binding complementary sequences in mRNAs for post-transcriptional regulation (7,8). For instance, Xu et al. demonstrated that miR-19b attenuated H2O2-induced apoptosis in rat H9C2 cardiomyocytes via targeting PTEN (9). Zhou et al. reported that miRNA-183 could regulate the cardiomyocyte apoptosis in heart failure (10). Shen et al. demonstrated that down-regulated microRNA-195-5p and up-regulated CXCR4 attenuates the heart function injury of heart failure mice via inactivating JAK/STAT pathway (11). MiRNA-181 family is a miRNA that attracted the interest of many scientist in recent 2 years (12,13). Previously, the miR-181 family (including miR-181b and miR-181c) expression pattern was changed in the glioblastoma multiforme (GBM) in which they could be used to predict the outcome of diseases or the therapeutic responses (14,15). In addition, there are also studies reporting the role of miRNA-181 in heat diseases (16,17). For example, HN Banavath showed that miR-181c activated mitochondrial calcium uptake by regulating MICU 1 in the heart (16). Further study showed that miR-181c could modulate the neuronal apoptosis through binding and inhibiting the TNF (18). Accordingly, we supposed this subtype of the microRNA, miR-181c, might regulate apoptosis in different organs not only in the brain but also in the heart.

In recent years, it has been confirmed that PI3K/Akt signaling pathway components are frequently activated in cell proliferation, apoptosis and survival, which are essential in human cancers (19,20). Studies also presented that PI3K/AKT pathway was also involved in the pathogenesis of cardiomyocyte apoptosis (21,22).In this study, we will be focused to elucidate the functions and mechanisms of miR-181c in cardiomyocyte apoptosis, and identify its interaction with PI3K/Akt cascade. We present the following article in accordance with the ARRIVE reporting checklist (available at http://dx.doi.org/10.21037/cdt-20-490).

Sixty male C57 mice (4-week old, ~15 gram) were purchased from Hunan SJA Laboratory Animal Co., Ltd (Hunan, China). Doxorubicin (DOX) induced heart failure animal model was established according to the protocol described previously (23). Adriamycin (ADR, DOX hydrochloride) was injected intraperitoneally (i.p.) at ADR 2.5 mg/kg (mice weight) for 6 times. The total duration was 14 days and total dosage was 15 mg/kg body weight. After final injection, mice were observed for 4 weeks for their general appearance, behavior, and mortality. Mice in the control group received saline in the same regimen with adriamycin treatment. This study was approved by Hunan SJA Laboratory Animal Co., Ltd. (No. SJA1906055: the license number) and conducted in strict accordance with the national institutes of health guidelines for the care and use of experimental animals. After experiments, the mice were sacrificed by pentobarbital sodium injection intraperitoneally (150 mg/kg).

The TUNEL assay was performed according to the manufacturer’s instructions (Chemicon). In brief, the heart tissues were fixed in formaldehyde and embedded in paraffin. 5 µm-thick tissue sections were deparaffinized, rehydrated, and rinsed with PBS. Normal heart tissue treated with DNase I (10 U/mL, 10 min at room temperature) is a positive control. Sections pretreated with 3.0% H2O2 were subjected to TdT enzymes reaction for 37 °C for 1 hour and incubated in digoxigenin-conjugated nucleotide substrate at 37 °C for 30 min. 3,3-diaminobenzidine treatment for 5 min was used to exhibiting DNA fragmentation in nuclei. Apoptotic cardiomyocyte’s nuclei were stained dark brown. Lastly, sections were counterstained with methyl green and cover-slipped. The sections were observed by light microscopy.

Statistical analysis was conducted utilizing SPSS 21.0. Results are represented as mean ± SD. Difference between the 2 groups were analyzed by Student’s t-test, and >2 groups were evaluated by one-way ANOVA. A value of <0.05 was statistically significant. 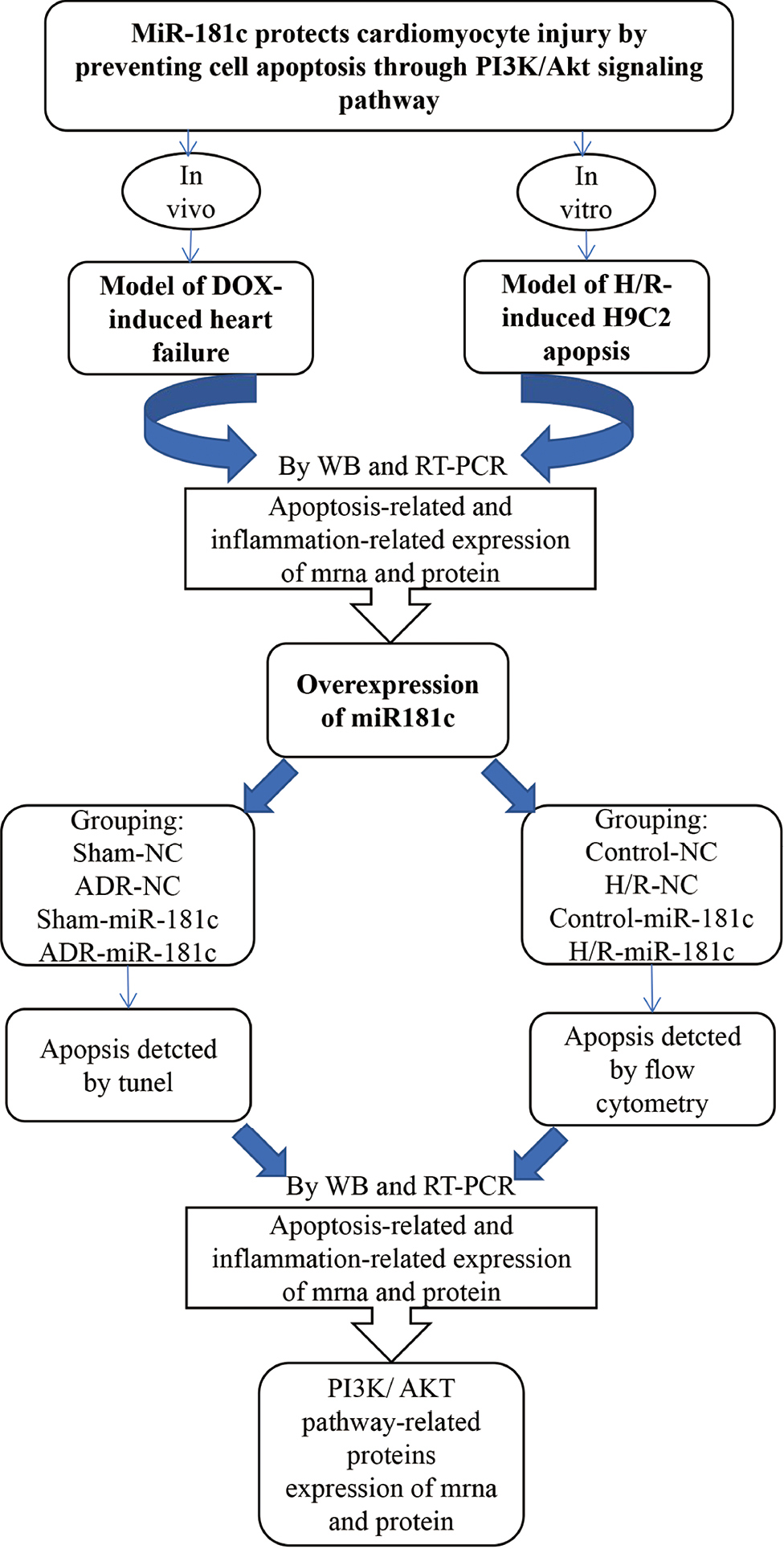 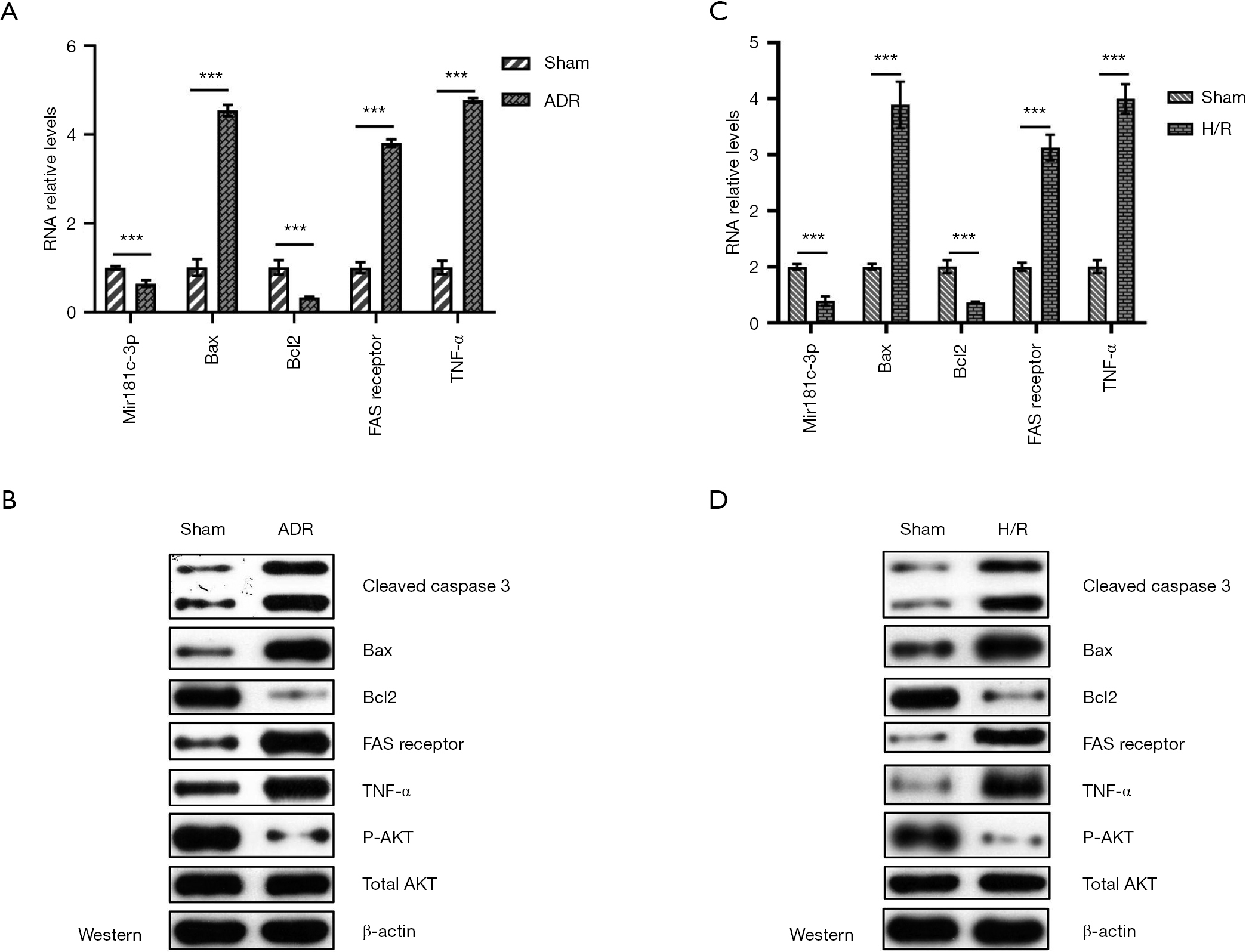 To further investigate the role of miR-181c on cardiomyocyte apoptosis, we cultured the H9c2 cell lines in vitro. As a result, flow cytometry indicated that H/R treatment significantly increased cell apoptosis, but miR-181c inhibited the H/R induced apoptosis in vitro (Figure 2A,B). Figure 2C,D showed that miR-181c reversed the protein expression of caspase 3, BAX, and BCL2 induced by H/R. As a summary, it is obvious that miR-181c overexpression could inhibit the H/R induced apoptosis and inflammation reaction in vitro. 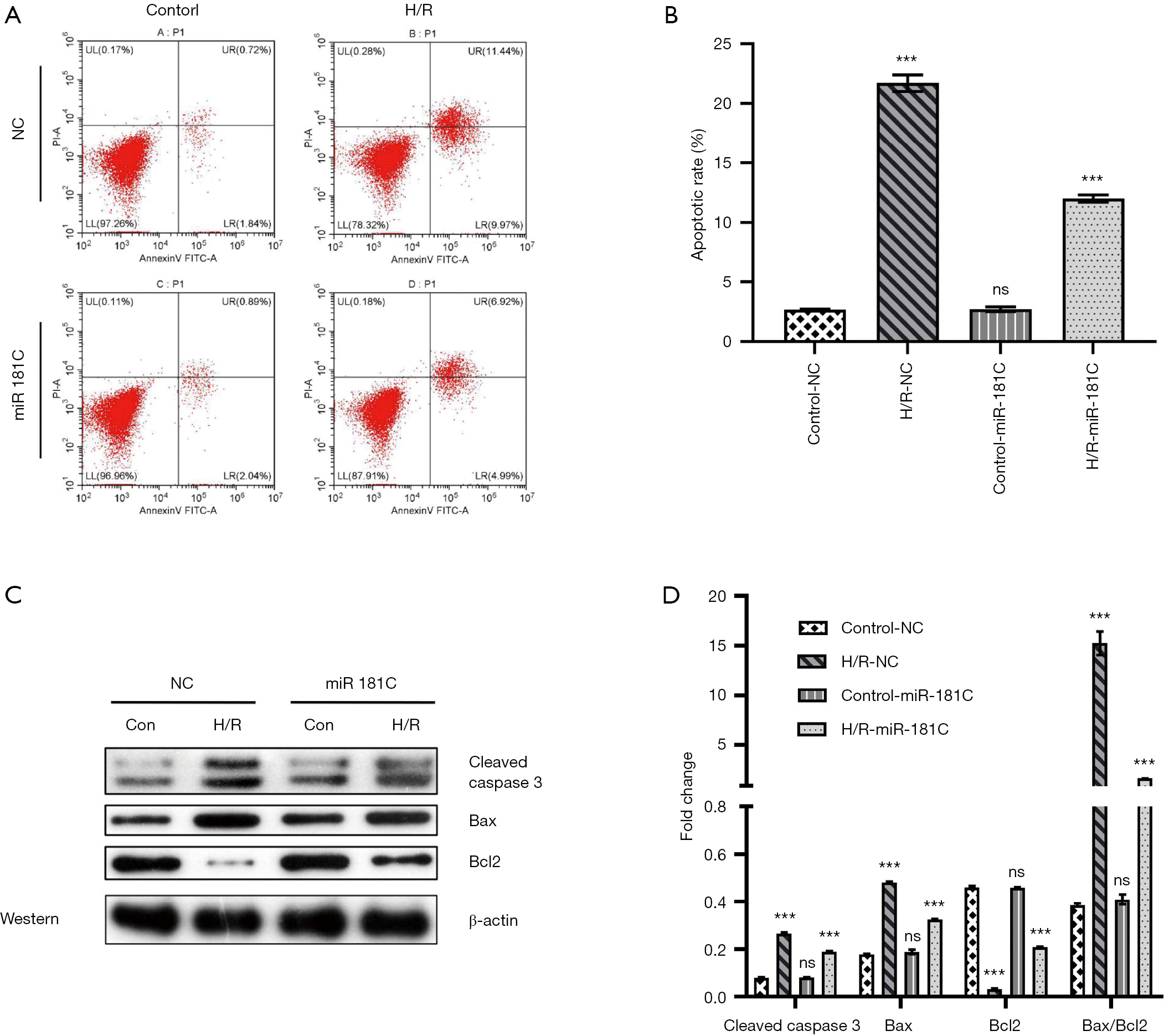 MiR181c was injected intravenously to treat heart injury induced by intravenous injection of ADR in the mice. Sixty male C57 mice were used for experiment, with 15 mice per group. The TUNEL staining demonstrated that the apoptosis was reduced, suggesting that miR-181c might contribute to the anti-apoptotic activity (Figure 3A,B). Furthermore, we measured the primary molecules regulating myocardial tissue apoptosis including cleaved caspase-3, Bax and Bcl2 (Figure 3C,D). The results showed that miR-181c suppressed the cleavage mediated activation of caspase-3, proving the anti-apoptosis function of miR-181c (Figure 3D). Meanwhile, miR-181c mimic inhibited the Bax expression while enhanced the antiapoptotic Bcl2 expression under DOX treatment, preventing myocardial tissue apoptosis in vivo (Figure 3D). It is highly consistent with the H/R treatment results in vitro. 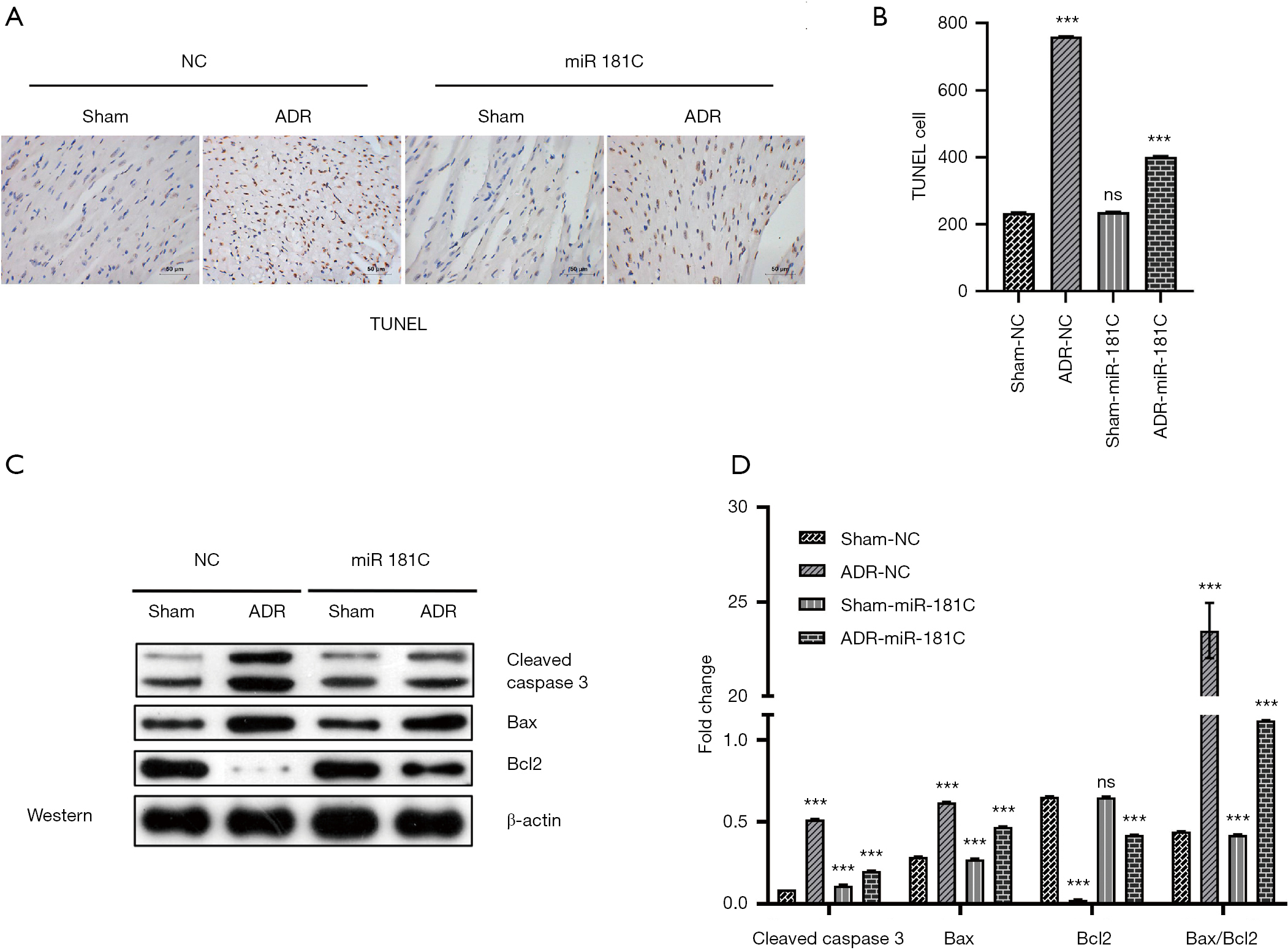 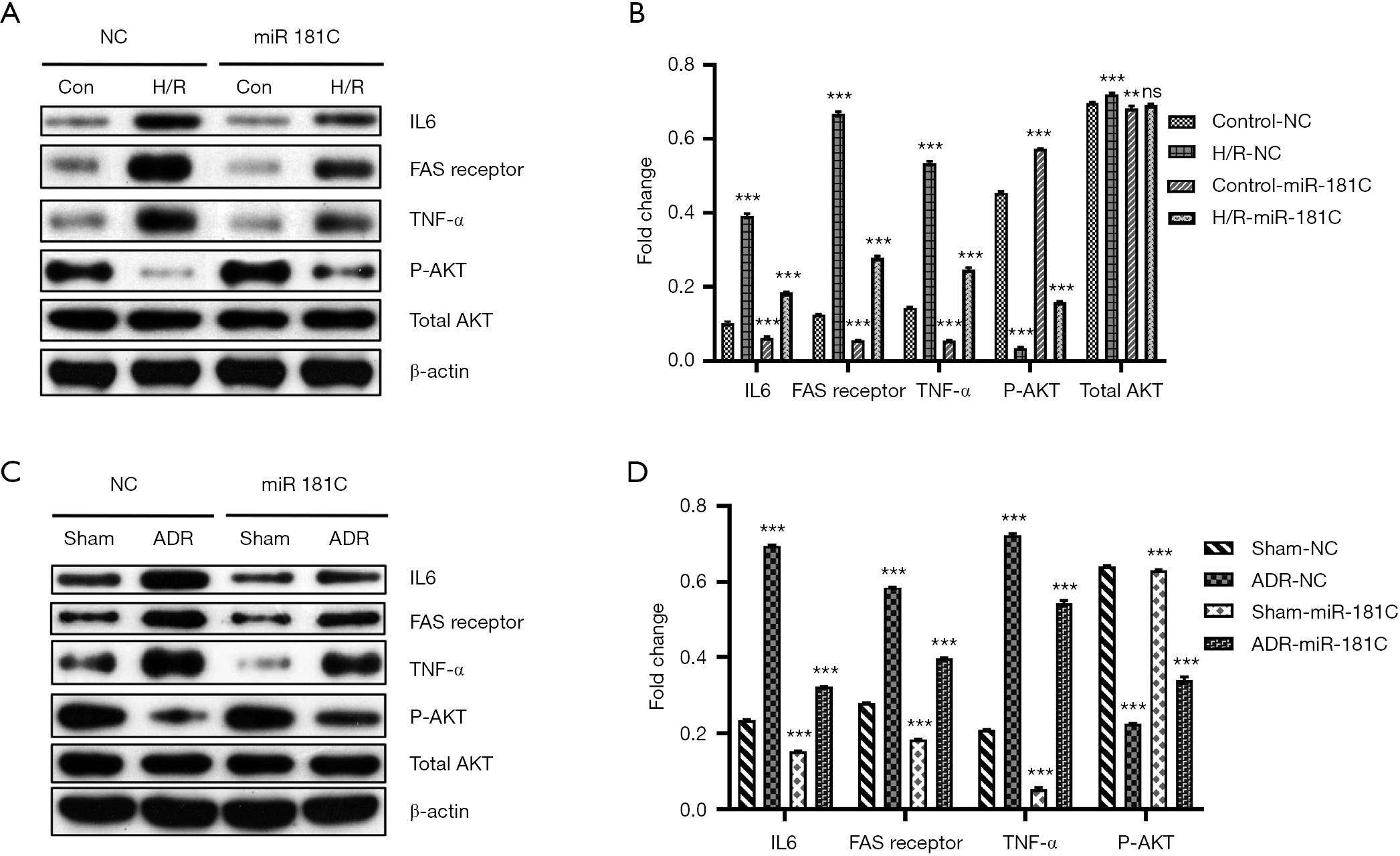 In oncology study, miR-181c was identified using miRNA profiling for prediction and monitoring of osteosarcoma development and therapeutic outcome (33,34). It was confirmed that miR-181c was expressed in the myocardial cells (35). In this study, we directly investigated the roles of miR-181c on series of apoptosis parameters using the miR-181c mimics and inhibitors. miR-181c transcriptionally activated the normal mice apoptosis molecules including Fas and TNF. miR-181c inhibited cardiomyocyte apoptosis with downregulated Bax but upregulated Bcl2 expression in vivo in the Adriamycin induced CHF model. It is different from its effect on the Ventricular myocytes isolated from Kunming mice described previously (36). In our experiment, we detected Bax/Bcl2 expression on cultured cardiomyocyte H9c2 in vitro. MiRNA-181c made direct effect on the expression of apoptosis protein Bax and Bcl2.

Alternative mechanisms of miR-181c on myocardial cell apoptosis were deciphered from the aspects of the signaling pathway. It was known that PI3K/Akt was functionally important in cell apoptosis (37,38). miR-181c was also reported to target Akt1 with involvement in the lipopolysaccharide-induced macrophage inflammatory reaction (39). It was possible that miR-181c might be involved in the signaling events of PI3K/Akt pathway. Although miR-181c did not change the expression of key component Akt, it promoted PI3K phosphorylation for the activation of PI3K-Akt signaling chain. PI3K/Akt pathway is closely involved in cell proliferation, cell cycle and cell apoptosis especially in different cancer cells, such as cervical cancer, lung cancer, or renal cancer (20,40). However, PI3K/Akt activation could either promote or prevent cell apoptosis as a cancer chemotherapy target (38,41). In our experiments, we found miR-181c mimic could confer the resistance to apoptosis in PI3K/Akt pathway. In consistence, we found that miR-181c attenuated apoptosis through PI3K/Akt phosphorylation.

miRNAs could mediate gene expression by influence on mRNA translation or stability (42,43). miR-181c has been report to target ST8SIA4 in chronic myelocytic leukemia (44), Smad7 in neuroblastoma (45), and Wnt inhibition factor 1 in non-small lung cancer cells (46). It is widely known that the regulation mechanisms of miRNA on heart diseases are very complicated (47). Previous studies by Das et al. (48) and Wang et al. (35) have shown that miR-181c can cause cardiac dysfunction by regulating mitochondrial morphology. In our experiments, cardiomyocyte apoptosis was induced by H/R (in vitro) or ADR (in vivo), which is different from the incentives of the previous two researches. In our results, miR-181c reversed the apoptosis induced by ADR, of which the mechanism might be relying on the targeting of Bcl2. Our regulatory mechanisms are different. Due to funding and time limitations, we did not focus on the different effects of miR-181c on heart failure, as well as the exact targeting mechanism and molecules. In future research, we will study the related mechanisms and the miRNA-181c targeting gene, and hope to further promote the treatment of heart failure with related drugs.

In the early screening, the abnormal down-regulation of miR-181c is expected to become a sign of early diagnosis of heart failure. As for gene therapy, the treatment of miR-181c provides a new direction for the future clinical and further treatment of heart failure. As a limitation, our current study did not carry our experiment to investigate the possible target of miRNA-181c in the inhibition of cardiomyocyte apoptosis. MiRNA-181c might target Bcl-2 to exert its biological functions, however, this needs further identification. In our future work, we will confirm the targets that miRNA-181c may bind in the cardiomyocyte apoptosis and examine their combined role in heart failure. We also plan to explore more potential miRNA targets in a more comprehensive and in-depth manner. We also look forward to continuously contributing to the treatment of heart failure.

We thank Chaoyang Hospital affiliated to Capital Medical University for all the support.

Reporting Checklist: The authors present the study in accordance with the ARRIVE reporting checklist. Available at http://dx.doi.org/10.21037/cdt-20-490

Conflicts of Interest: All authors have completed the ICMJE uniform disclosure form (available at http://dx.doi.org/10.21037/cdt-20-490). The authors have no conflicts of interest to declare.

Ethical Statement: The authors are accountable for all aspects of the work in ensuring that questions related to the accuracy or integrity of any part of the work are appropriately investigated and resolved. This study was approved by Hunan SJA Laboratory Animal Co., Ltd. (No. SJA1906055: the license number) and conducted in strict accordance with the national institutes of health guidelines for the care and use of experimental animals.