Propofol (PPF) is one of the widely used anesthetic reagents for non-procedural sedation in intensive care units. Although rarely occurring, PPF infusion syndrome (PRIS) is potentially lethal, may cause severe side effects, such as hyperlipidemia, rhabdomyolysis, renal and cardiac failures (1-3). Unfortunately, due to its nature of rarity, the underlying genetic mechanisms of PRIS are largely unknown.

During past decades, limited investigations had used animal models or human patient-derived samples to study PRIS (4,5). Among them, human induced pluripotent stem cells (iPSCs) had been showing significantly clinical potentials, as they may differentiate into various human cells or organs, such as cardiomyocytes (6,7). Studies also demonstrated that human iPSC-derived cardiomyocytes (HiPSC-CMs) possessed similar cellular and molecular characteristics as those in in situ human cardiac cells (8,9). Specifically, a recent study showed that HiPSC-CMs responded to in vitro PPF exposure with similar cytotoxic characteristics as observed in human patients with PRIS (10).

Long non-coding RNAs (lncRNAs) are groups of long-length (>200 nucleotides), non-protein-coding RNA transcriptomes, that were recently discovered to play critical roles in almost all phases of human health and diseases (11-13). In cardiomyocytes, various studies had demonstrated that lncRNAs are actively involved in many aspects of cardiac development and pathophysiology (14-16). For example, a lncRNA named as cardiac apoptosis-related lncRNA (CARL) was reported to modulate cardiomyocyte apoptosis and mitochondrial fission through miR-539 and Prohibitin 2 (PHB2) (17). In addition, lncRNA of Urothelial Cancer Associated 1 (UCA1) was found to induce cardiomyocyte hypertrophy through competitively binding of miR-184/HOXA9 epigenetic axis (18). Moreover, lncRNA of H19 was discovered to suppress cardiomyocyte autophagy in diabetic cardiomyopathy (19).

Of many of the lncRNAs associated with human health or diseases, small nucleolar RNA host gene 6 (SNHG6) belongs to the super lncRNA family of SNHG and was found to be an active epigenetic transcriptome in various types of human cancers (20-22). However, there are only limited reports demonstrating functional mechanisms of SNHG6 in the cardiovascular system. Among them, it was shown that SNHG6 is likely to be aberrantly expressed in patients with atherosclerosis, and SNHG6 may modulate the progression and pathology of atherosclerotic cardiac tissues (23-25). However, the possible biological function of SNHG6 involved in the process of PPF-induced cardiac cytotoxicity has never been elucidated.

In this study, we established an in vitro PPF-induced cardiac cytotoxicity model by introducing PPF exposure to the in vitro culture of HiPSC-CMs. Then, we investigate the expression and function of SNHG6 during this process. The goal of this study is to explore the epigenetic underlying mechanisms of PRIS.

This study was approved by the Ethics Committee for Human & Clinical Research at the People’s Hospital of China Three Gorges University in Yichang, Hebei Province, China (Approval ID: CTGU20190455). All procedures were performed in accordance with the Declaration of Helsinki (2013 version). Informed consent was obtained from the patient for publication of this manuscript.

A lentiviral vector containing short-hairpin RNA (shRNA) specifically targeting human lncRNA SNHG6 (SNHG6_Sh), and another lentiviral vector containing a control non-specific shRNA (C_Sh) were designed and manufactured by GenePharma (GenePharma, Shanghai, China). Lentiviral packaging, transfection and supernatants collection/purification were also conducted by GenePharma (GenePharma, Shanghai, China). In the culture of H7 cells, cells were infected with lentiviral supernatants (SNHG6_Sh or C_Sh) for 48 h, followed by a selection process using G418 (0.5 mg/mL, MilliporeSigma, Shanghai, China) for 72 h. After 3–5 passages, cells were collected and examined by qRT-PCR to verify the downregulation of SNHG6. Then, these cells were differentiated toward HiPSC-CMs using the method described above.

The 3'-untranslated region (3'-UTR) of wild-type SNHG6, which includes a putative binding site of hsa-miR-186-5p was sub-cloned into pmiR-REPORT luciferase plasmid (Promega, USA) and named as SNHG6_Lu. In addition, the hsa-miR-186-5p binding site was mutated and the mutant SNHG6 3'-UTR was sub-cloned into pmiR-REPORT, named as SNHG6(MU)_Lu. In human HEK293T cells, SNHG6_Lu or SNHG6(MU)_Lu were co-transfected with hsa-miR-185-5p mimics (miR-186-5p, GenePharma, Shanghai, China) or a control non-specific human miRNA mimics (C_mmiC, GenePharma, Shanghai, China). Forty-eight hours later, a dual-luciferase reporter assay (Promega, USA) was performed. Relative Firefly/Renilla luciferase activities were then calculated and normalized to the luciferase activity in HEK293T cells co-transfected with SNHG_Lu and C_mmiC.

A miRNA inhibitor specifically targeting hsa-miR-186-5p (miR186_In), and a control non-specific miRNA inhibitor (C_In) were both purchased from GenePharma (GenePharma, Shanghai, China). In the culture of purified HiPSC-CMs, cells were collected and re-seeded into 6-well plates in fresh culture medium with the addition of 10% FBS for 12 h. Transient transfection of miR186_In or C_In was then conducted for 12 h using Lipofectamine 3000 Transfection Reagent (Thermo Fisher Scientific, USA). After that, qRT-PCR was performed to verify the downregulation of hsa-miR-186-5p.

All experiments were independently repeated at least three times. Data were shown as means ± standard error of the mean (SEM). Statistical analyses were performed using an unpaired two-tail student’s t-test on SPSS software (SPSS, IBM, RRID: SCR_002865, USA). The difference was termed as statistically significant if a P value was less than 5% (0.05).

HiPSC-CMs were exposed to PPF for 48 h. After that, a viability assay indicated that, at concentrations between 2 and 100 µg/mL, PPF induced significant cell death (Figure 1A, *P<0.05). Also, an immunofluorescent assay showed that, 50 µg/mL PPF markedly increased mitochondrial superoxide production in HiPSC-CMs (Figure 1B). In addition, a TMRE assay demonstrated that mitochondrial membrane potentials in HiPSC-CMs were drastically decreased by 5–100 µg/mL PPF (Figure 1C, *P<0.05). Moreover, a qRT-PCR assay indicated that human lncRNA, SNHG6, was upregulated by 5–100 µg/mL PPF (Figure 1D, *P<0.05). 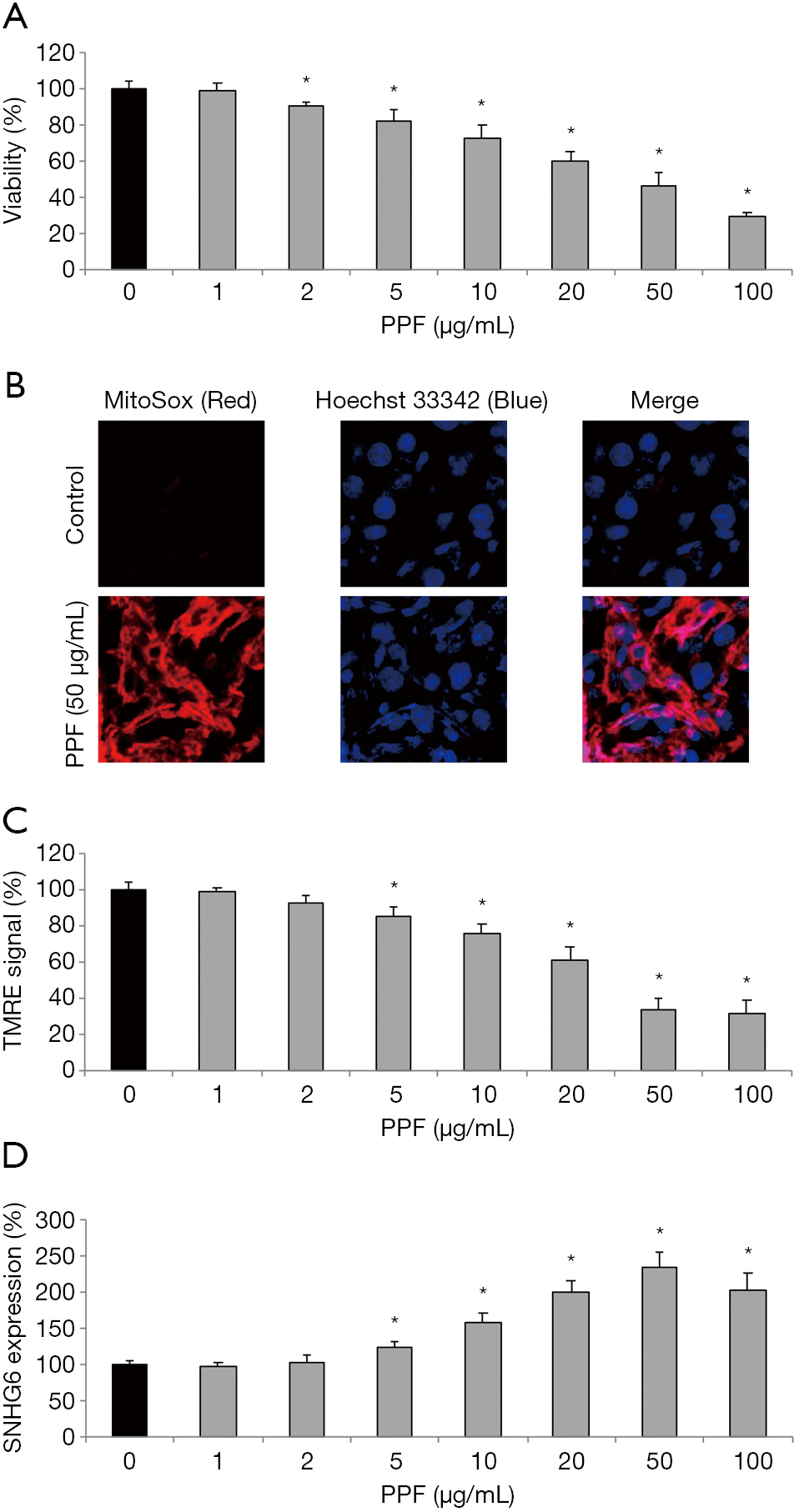 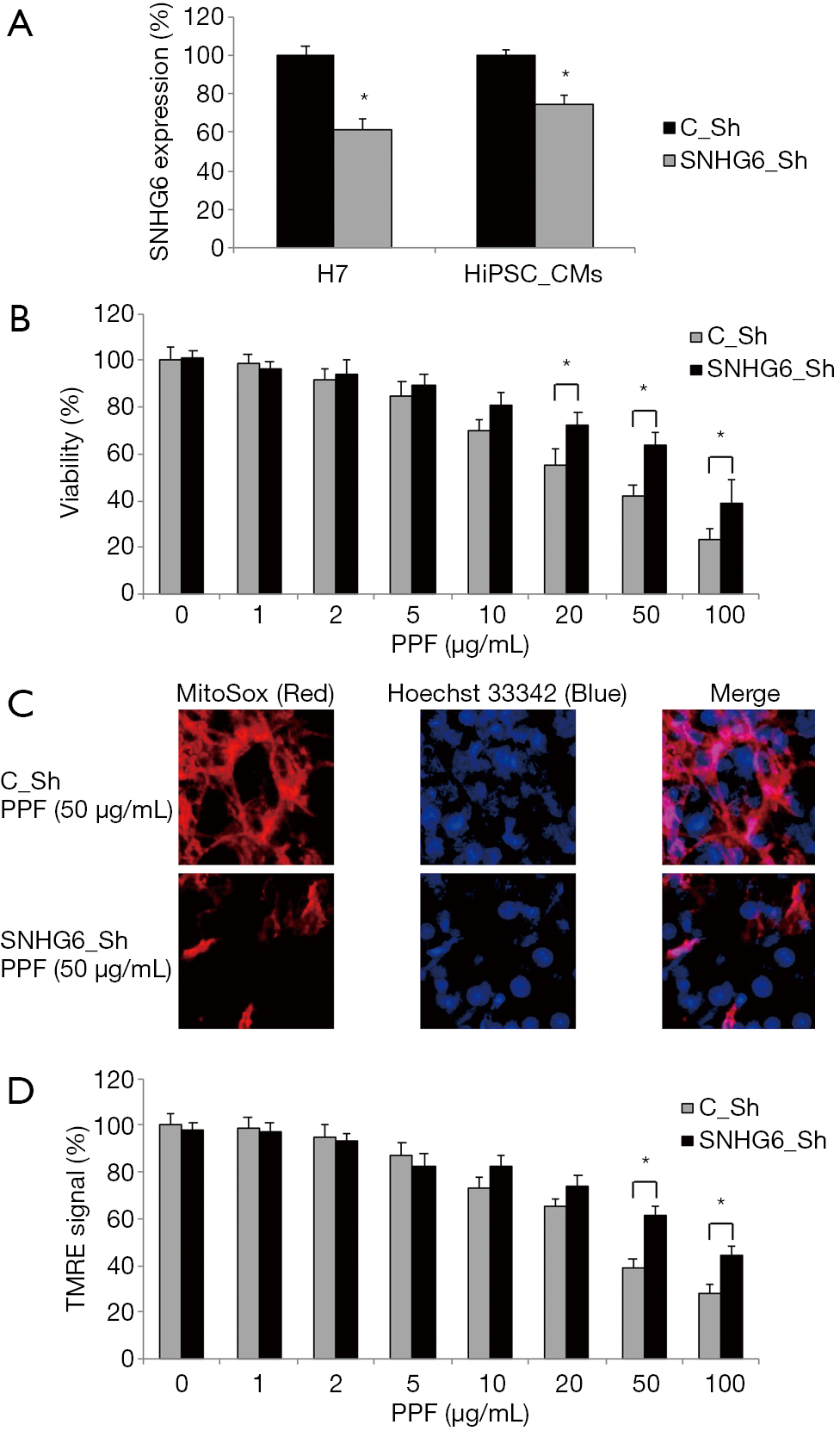 Thus, these data suggested that SNHG6 downregulation could rescue PPF-induced cytotoxicity in HiPSC-CMs.

Using an online epigenetic targeting algorithm, StarBase 3.0 (28,29), it was noticed that human microRNA-186-5p (hsa-miR-186-5p) may serve as the downstream competing target of SNHG6 (Figure 3A). We thus constructed two luciferase vectors, one containing the wild-type human SNHG6 3'-UTR which hosts a putative hsa-miR-186-5p binding site (SNHG6_Lu), and the other containing the mutant SNHG6 3’-UTR with modified DNA sequences on the putative hsa-miR-186-5p binding site (SNHG6(MU)_Lu). Then, a dual-luciferase activity assay confirmed our hypothesis, indicating that SNHG6 could bind hsa-miR-186-5p (Figure 3B, *P<0.05, ∆P>0.05). 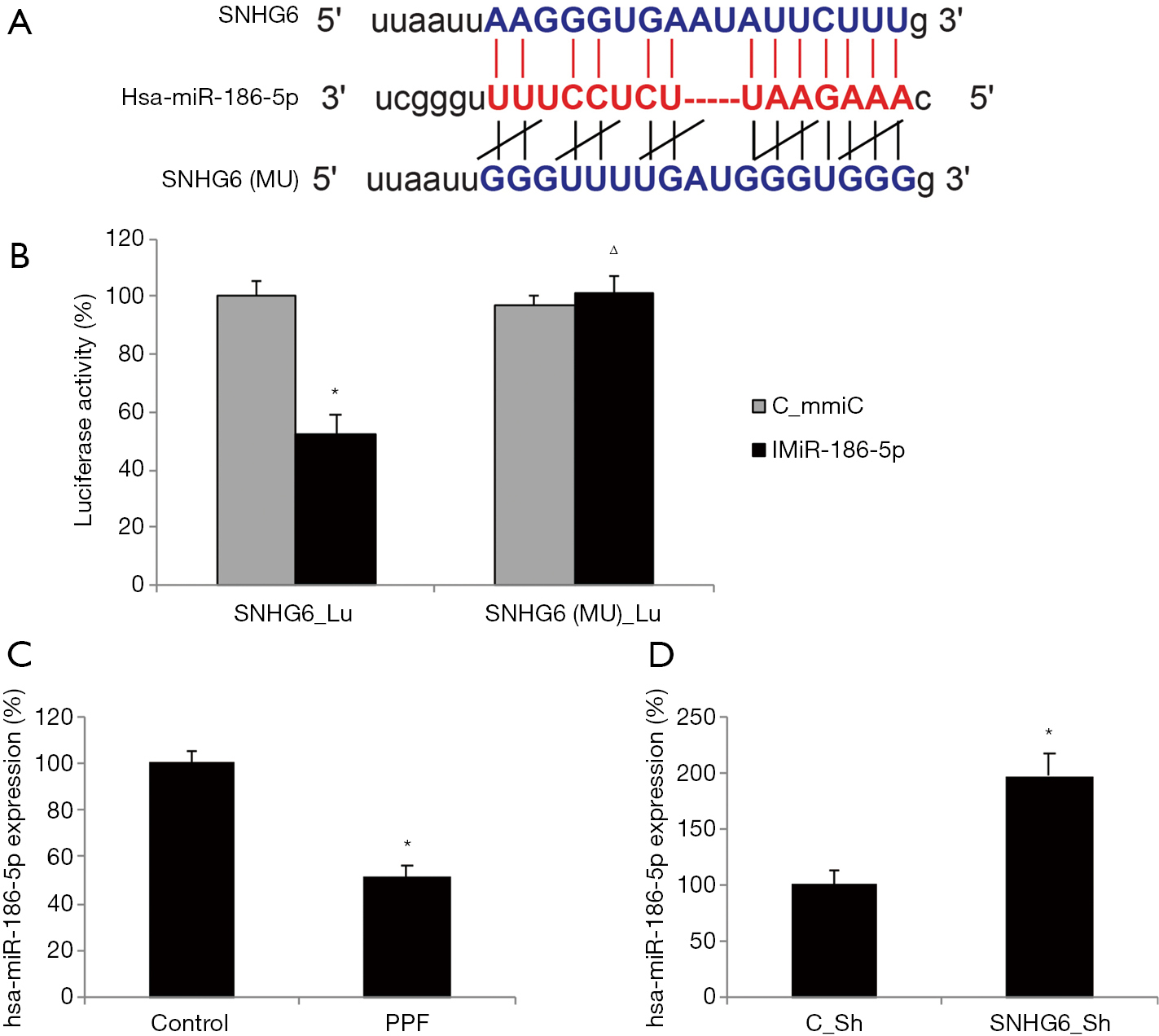 Thus, these results suggested that hsa-miR-186-5p is the downstream competing target of SNHG6, thus reversely correlated with SNHG6 expression in HiPSC-CMs. 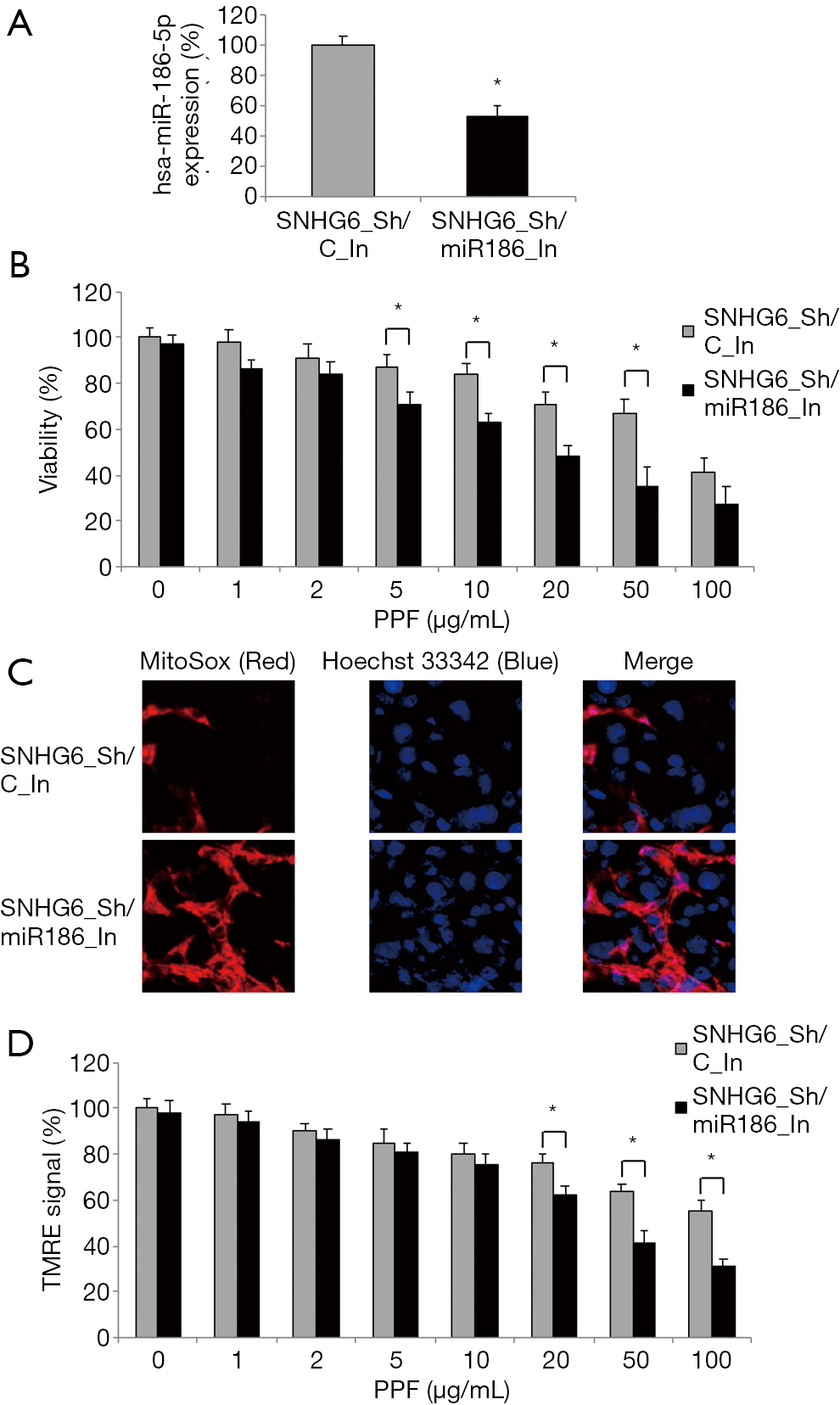 Therefore, these results indicated that hsa-miR-186-5p inhibition reversed the rescuing effect of SNHG6 downregulation on PPF-induced cytotoxicity in HiPSC-CMs.

It was reported that, in order to prevent PRIS, the dosage of in vivo induction of PPF in human patients shall not be above 4 mg/kg/h for a 48-h time duration (1,2). In this study, we mimicked PPF-induced cardiac cytotoxicity in an in vitro model HiPSC-CMs. We discovered that cell viability was reduced and mitochondrial functions were damaged in HiPSC-CMs exposed to PPF approximately at a concentration of 5 µg/mL or higher. These findings are in line with the results in a previous study [10], and in accordance with the prediction that the non-toxic plasma concertation PPF was around 2.5 µg/mL (30).

Also in this study, we discovered SNHG6 was upregulated in PPF-exposed HiPSC-CMs. In a previous study, it was demonstrated that SNHG6 was aberrantly upregulated in murine fetal cardiac tissues with ventricular septal defect, and forced overexpression of SNHG6 inhibited proliferation and induced apoptosis in cardiomyocyte cell line P19 cells (23). In addition, it was noted SNHG6 was upregulated in cardiac tissues in patients with atherosclerosis, and knockdown of SNHG6 alleviated oxidative-stress induced cardiac apoptosis (24,25). Thus, our results are in line with those in previous studies, suggesting that aberrant expression (mostly likely upregulation/overexpression) of SNHG6 is very likely associated with pathological conditions in cardiovascular diseases.

The most important findings of our study were that, after we knocked down SNHG6 expression in HiPSC, the downregulation pattern of SNHG6 can be maintained until cardiac differentiation and we were able to show the rescuing effects of SNHG6 downregulation on PPF-induced cytotoxicity in HiPSC-CMs. Within the super-family of SNHG lncRNAs, newly emerged evidence suggested that, other members than SNHG6, such as SNHG1 and SNHG16 are also actively involved in the development and pathology of cardiomyocytes (31,32). Our preliminary data also showed gene expression changes of other SNHG super-family than SNHG6 (data not shown). However, after gene modification at stem cell stage, downregulating or upregulating patterns of other SNHG family members could not be maintained in HiPSC-CM stage. Thus, future investigations, possibily utilizing other in vivo or in vitro models with much feasible gene-editing capabilities, would further our understanding on the biological functions of SNHG family in regulating PPF-induced cardiac cytotoxicity.

Also, in our study, we explored the intrinsic signaling network of SNHG6 responsible for rescuing PPF-induced cytotoxicity in HiPSC-CMs. We demonstrated that hsa-miR-186-5p was an endogenous ceRNA candidate of SNHG6 (using dual-luciferase activity assay), and their expressions were inversely correlated in PPF-exposed HiPSC-CMs (using qRT-PCR assay). More importantly, we verified hsa-miR-186-5p was the functional downstream competing target of SNHG6, as suppressing hsa-miR-186-5p reversed the rescuing effects of SNHG6 downregulation on PPF-induced cytotoxicity in HiPSC-CMs. It is worth noting that, during the processes of SNHG6 regulating other human diseases (such as human cancers), SNHG6 was reported to be associated with various ceRNA candidates, probably depending on the sites or organs of diseases (22,33). Thus, more studies are required, in order to fully understand the associated signaling pathways of SNHG6 during the process of PRIS.

The authors thank Dr. Tianyu Qian for his critical review on the manuscript.

Conflicts in Interest: Both authors have completed the ICMJE uniform disclosure form (available at http://dx.doi.org/10.21037/cdt-20-443). The authors have no conflicts of interest to declare.

Ethical Statement: The authors are accountable for all aspects of the work in ensuring that questions related to the accuracy or integrity of any part of the work are appropriately investigated and resolved. This study was approved by the Ethics Committee for Human & Clinical Research at the People’s Hospital of China Three Gorges University in Yichang, Hebei Province, China (approval ID: CTGU20190455). All procedures were performed in accordance with the Declaration of Helsinki (2013 version). Informed consent was obtained from the patient for publication of this manuscript.