Association between platelet count and the risk of bleeding among patients with nonvalvular atrial fibrillation taking dabigatran after radiofrequency ablation: a cohort study

Atrial fibrillation (AF) remains an important risk factor for systemic embolism and stroke (1,2). Substantial evidence suggests that anticoagulation with warfarin reduces this risk by two-thirds, whereas antiplatelet therapy decreases the risk of systemic embolism and stroke by only 22% (3). There is a lot of evidence that dabigatran, which is a direct thrombin inhibitor, is convenient and safe alternatives to VKAs based on the results of the Randomized Evaluation of Long-Term Anticoagulation Therapy (RE-LY) trial (4). Although non-vitamin K antagonist (VKA) oral anticoagulants (OACs) (NOACs) can prevent systemic embolism and stroke, they can cause bleeding. The benefits of NOACs in treatment of nonvalvular atrial fibrillation (NVAF) are based on a balance between reducing the risk of stroke and reducing the risk of bleeding. The risk of bleeding in AF patients undergoing OAC therapy can be assessed by hypertension, abnormal renal/liver function, stroke, bleeding history or predisposition, labile international normalized ratio, elderly (>65 years), drugs/alcohol concomitantly (HAS-BLED) (5), older age (>75 years), reduced haemoglobin/haematocrit/ history of anaemia, bleeding history, insufficient kidney function, and treatment with antiplatelet (ORBIT) (6) and Hepatic or Renal Disease, Ethanol Abuse, Malignancy, Older Age, Reduced Platelet Count or Function, Re-Bleeding, Hypertension, Anemia, Genetic Factors, Excessive Fall Risk and Stroke (HEMORR2HAGES) scores (7). However, these scores were mainly obtained and developed mainly among patients taking VKAs. The relationship between the risk factors for bleeding and NOACs is not well understood.

Platelets play a key role by accelerating some steps in the coagulation process. A reduction in platelet count or function is a risk factor for bleeding in anticoagulated patients based on the HEMORR2HAGES scores (7). However, in this trial, all patients receiving OAC therapy were treated with warfarin or aspirin and did not consume a NOAC. To the best of our knowledge, no epidemiological trials have focused on the relationship of platelets with bleeding in NVAF patients taking dabigatran. Therefore, the goal of this paper was to investigate the relationship between platelet count and dabigatran-related bleeding in NVAF patients after catheter ablation. We present the following article in accordance with the STROBE reporting checklist (available at http://dx.doi.org/10.21037/cdt-20-645).

Details of the trial design, outcome definitions and patients have been published (8). Patients were recruited from 12 study sites in China between February 2015 and December 2017. In brief, a total of 576 patients with NVAF after radiofrequency ablation received oral dabigatran (110 mg bid) treatment (9). An electronic data collection system was used for the data collection process and the data were reviewed regularly throughout the trial by an independent data and safety monitoring committee. The study was conducted in accordance with the Declaration of Helsinki (as revised in 2013). The study was approved by the Second Affiliated Hospital of Nanchang University research committee (MISSION-AF, ClinicalTrials.gov Identifier: NCT02414035) and informed consent was taken from all the patients.

The primary study outcome was the first occurrence of all bleeding events during the 3-month follow-up period. Major bleeding was defined as (I) fatal bleeding; (II) a reduction in the hemoglobin concentration of at least 20 g/L with the transfusion of at least two units of blood; and (III) symptomatic bleeding in a critical area or organ. All other bleeding events were classified as minor (10,11).

The platelet counts obtained at baseline were treated as a continuous variable and measured by automatic blood analysis equipment in accordance with the standard methods that were consistent across the laboratories at the different centers. Laboratory staff members were not aware of the research protocol.

Based on the MISSION-AF database, we analyzed the effect of platelet count on frequencies of bleeding events in NVAF patients. In present study, we only analyzed the 3-month follow-up date, because the study population included some NVAF patients with CHA2DS2-VASc scores of 0 for men and 1 for women. Anticoagulation only needs to be maintained for only 8 weeks after ablation for these patients (12). Any decisions to continue anticoagulation with dabigatran after the 3-month follow-up period were based on the guidelines (12) and at the professional physician’s discretion. In addition, the risk for bleeding events with dabigatran was highest during the first 90 days of treatment (13,14). A total of 576 NVAF patients treated with dabigatran completed the 3 months of follow-ups.

Continuous variables are expressed as the mean ± standard deviation or the median (minimum, maximum). Categorical variables are expressed as numbers and frequencies. To test for differences among patients with different platelet count groups (group 1, <100×109/L; group 2, 100–200×109/L; and group 3, ≥200×109/L), we compared continuous variables using one-way analysis of variance (ANOVA). and categorical variables using the chi-squared test or Fisher’s exact test. The hazard ratio (HR) and 95% confidence interval (CI) between platelet count and bleeding events were evaluated using Cox proportional hazards models. The models were incrementally adjusted for the following potential confounders based on theoretical considerations and their availability in this study: model 1, crude model; model 2, adjusted for age, gender, smoking habits, drinking habits, BMI and the type of AF; and model 3, additionally accounted for eGFR, comorbidities (hypertension, CHD, HF, previous stroke or TIA, PAD, and a history of bleeding), medications (ACE inhibitors (ACEIs)/angiotensin II receptor blockers (ARBs), beta-blockers, proton-pump inhibitors (PPIs), amiodarone, digoxin, antiplatelet agents, and statins). Then, we used fractional polynomial regression models to explore nonlinear associations of platelet counts and bleeding events, in which platelet counts were treated as continuous variables. If nonlinearity was detected, we first calculated the inflection point using a recursive algorithm and then constructed a two-piecewise Cox proportional hazard model on both sides of the inflection point. We determined the best-fit model based on the P values from the log likelihood ratio test. We also examined if the association between PLT count and bleeding varied by sex, age, type of AF, smoking, drinking and SBP. A sensitive analysis restricting the sample only to the patients without treatment of Antiplatelet agents was performed. All the analyses were performed with the statistical software packages in R (http://www.R-project.org, The R Foundation) and Empower Stats (http://www.empowerstats.com, X&Y Solutions, Inc., Boston, MA). A two-sided P value <0.05 was considered statistically significant for all tests.

Based on the inclusion and exclusion criteria, a total of 576 patients were included for the final data analysis (mean age: 61.9±10.2 years; 61.4% were male) (Figure 1). Table 1 shows the baseline characteristics in three groups of patients with platelet counts. The patients in the group with the highest platelet count were more likely to be younger and have a higher BMI and eGFR, and this group had a higher proportion of females than the other groups. No statistically significant differences were detected in the SBP, drinking habits, CHA2DS2-VASc score, HAS-BLED score, hypertension, CHD, HF, PAD, TIA, the history of stroke, history of bleeding, ACEIs/ARBs, beta-blockers, PPIs, amiodarone, digoxin, antiplatelet agent, and statins among the different platelet count groups (P values >0.05). 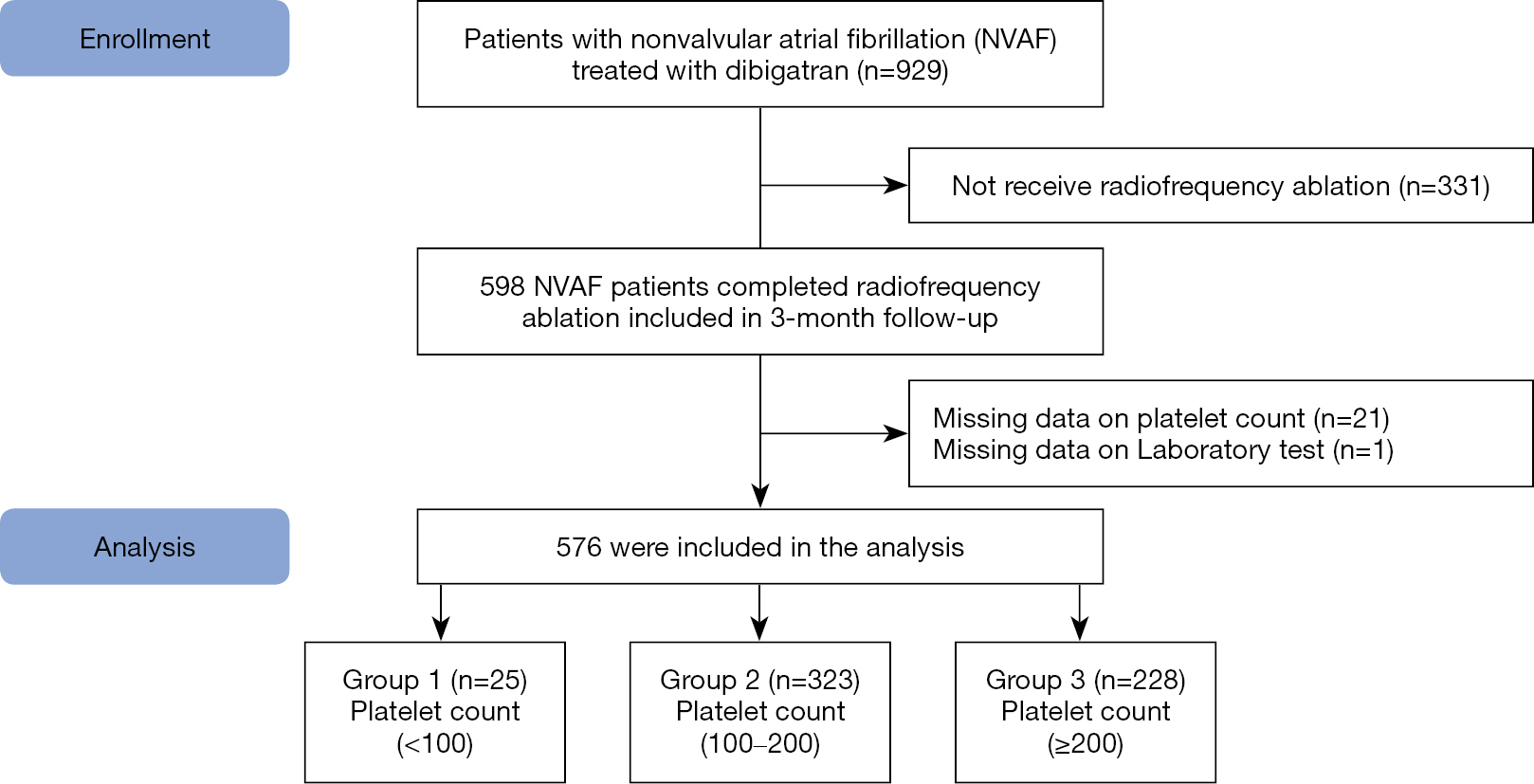 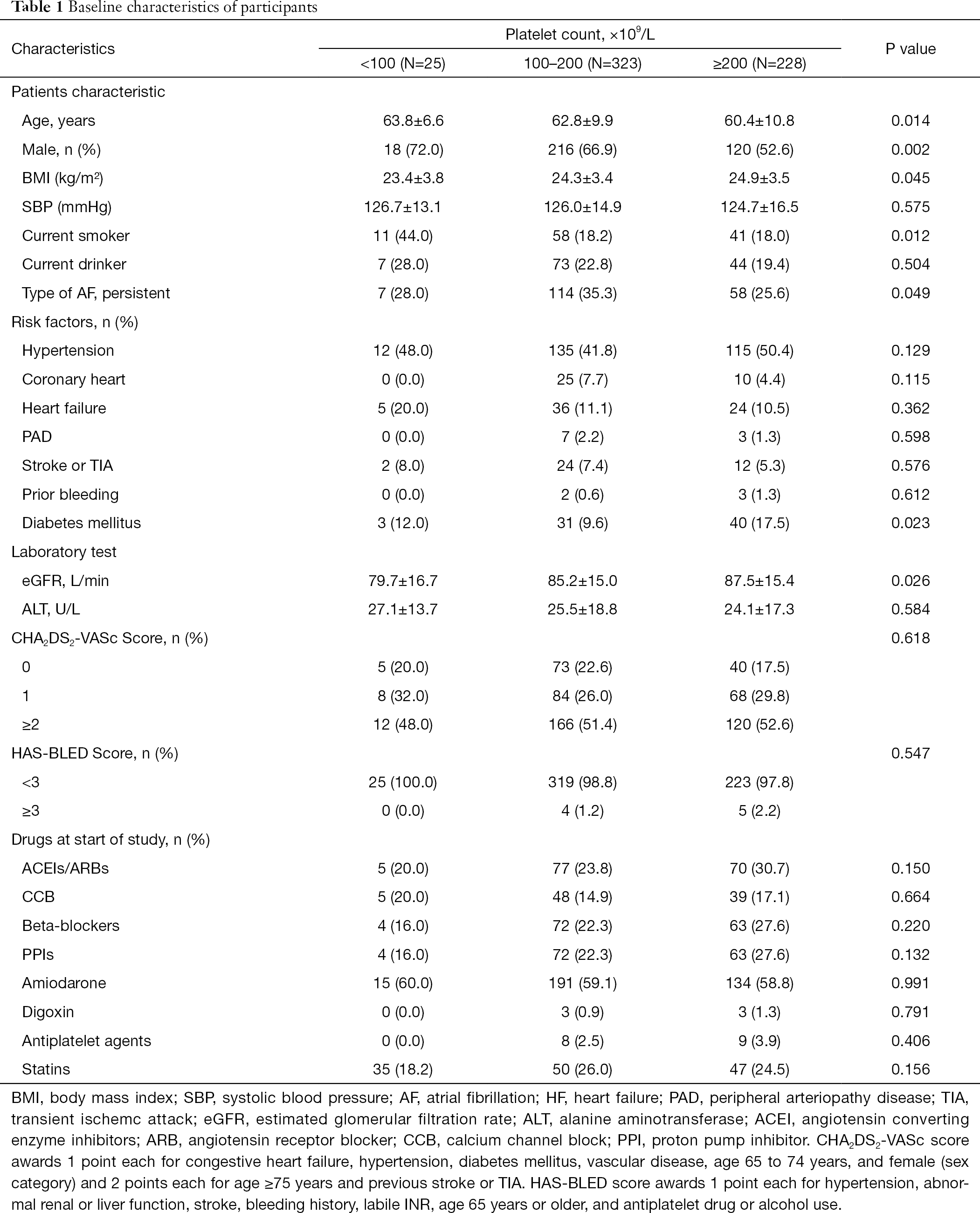 Association between platelet count and the risk of bleeding

Nonlinearity between platelet count and the risk of bleeding 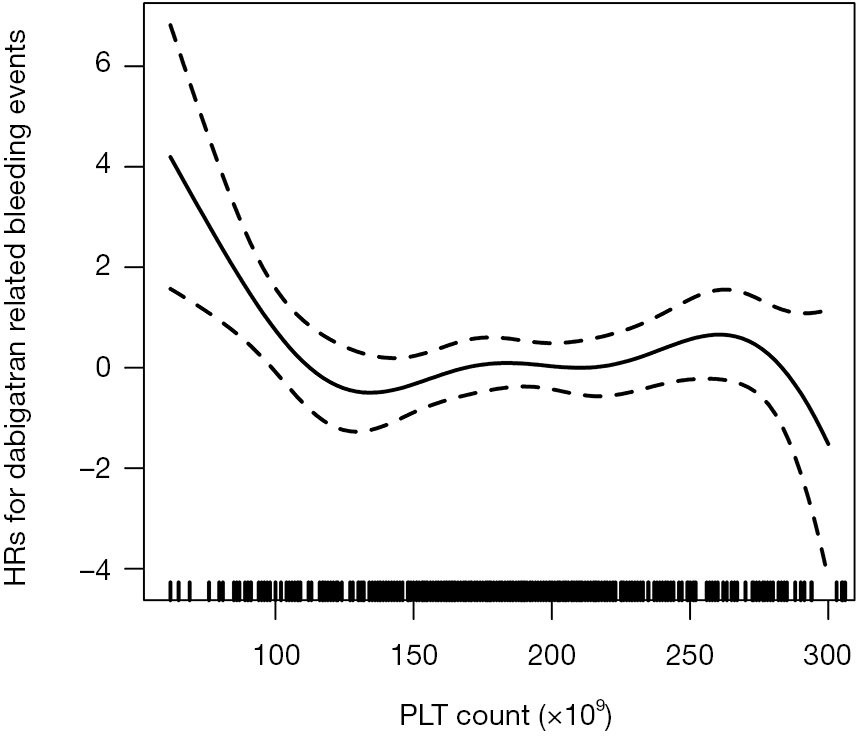 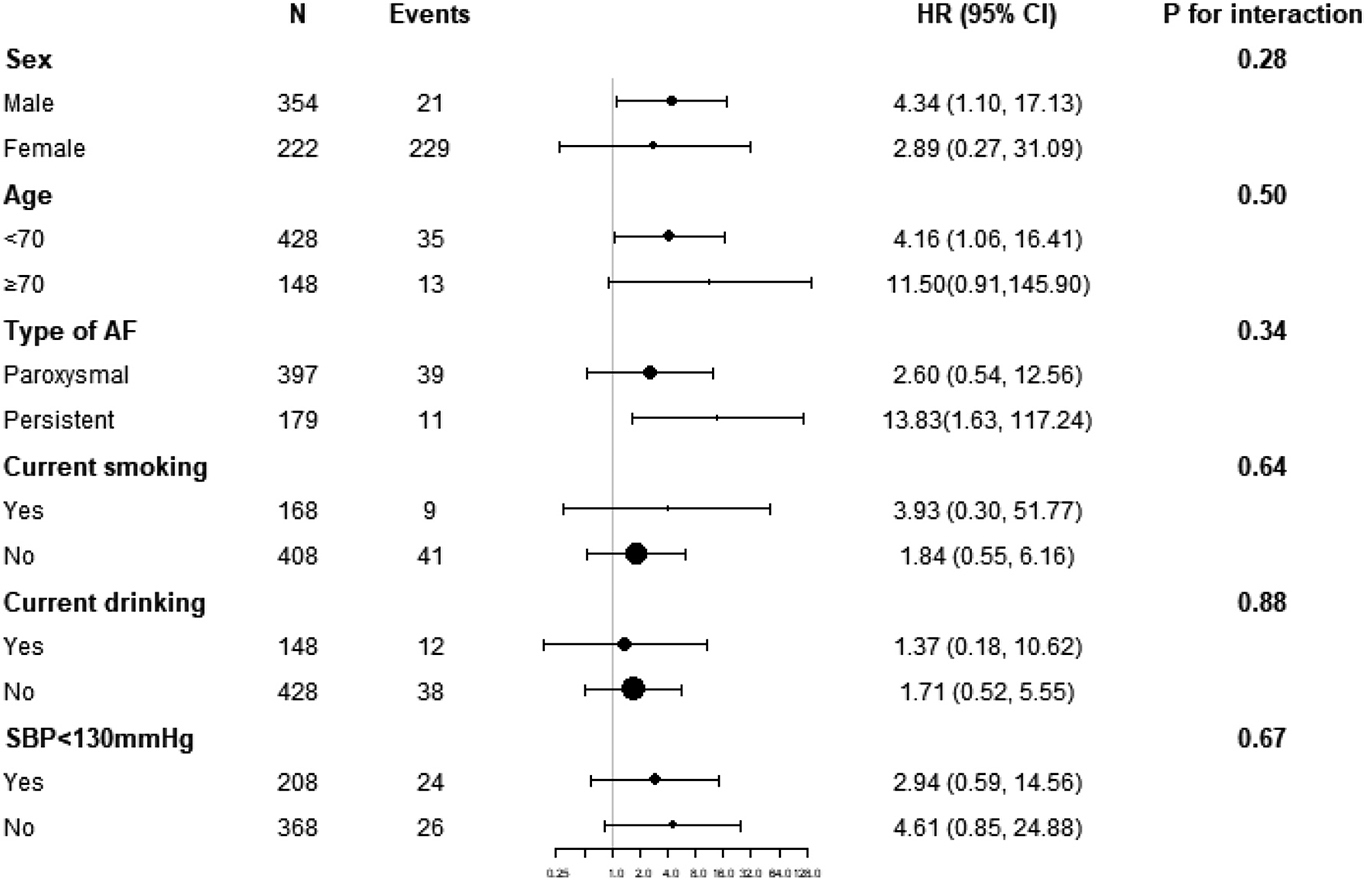 In the present study, our purpose was to determine the relationship between platelet count and bleeding events among NVAF patients receiving radiofrequency ablation in China. A nonlinear association was found, which suggests that patients with platelet counts <105×109/L are associated with a high incidence of bleeding events. This association remained after a multivariate adjustment for other confounding factors was performed.

The nonlinear association between platelet count and bleeding events is biologically plausible. Hemostasis can be viewed as four separate but interrelated events: compression and vasoconstriction; the formation of a platelet plug; blood coagulation; and clot retraction. In addition, platelets regulate bleeding in three stages. First, they form multicellular aggregates linked by protein strands at openings in blood vessels. The aggregates form a physical barrier that begins to limit blood loss soon after the opening occurs. Second, phospholipids on the platelet plasma membrane activate the enzyme thrombin, which initiates a cascade of events ending in clot formation. Finally, platelets possess multiple storage granules, which they discharge (secrete) to enhance coagulation. A reduction in platelet count or function can increase coagulation time, which can increase the risk of bleeding events.

This study has several limitations. First, the findings in this study were based on a 110 mg dabigatran dose instead of a 150 mg dabigatran dose, so the conclusions cannot be applied to patients taking 150 mg of dabigatran. Some previous studies showed that a 110 mg dose of dabigatran in Asian populations yields pharmacokinetics and clinical outcomes in Asian populations that are similar to those in Western populations taking a 150 mg dabigatran dose (19,20). Additionally, Asians have a relatively small body size and lower renal clearance, as well as genetic differences in metabolic or pharmacodynamic features, and lower doses of dabigatran may enhance the safety (21,22). Second, all patients enrolled in this study were NVAF patients who underwent catheter ablation, and additional large studies are needed to confirm our findings in all NVAF patients. In order to reduce the risk of operation, the platelet count of all patients was greater than 50×109/L, but we still observed that the risk of bleeding events of group T1 was higher than other groups. Table S2 shows that the average mean, median and range of platelet counts in all groups. Third, the sample size was small, and the mean HAS-BLED score was 0.69 in all patients; thus, the incidence of major bleeding events was very low. Therefore, all bleeding events were minor bleeding events, we can only perform a statistical analysis of the relationship between platelet count and minor bleeding. However, prior studies showed that the occurrence of minor bleeding may predict major bleeding events and may lead to a decrease in the effectiveness of OAC therapy (23). Finally, the group of patients where majority bleeding is expected (PLT counts <100×109/L) is the smallest (25 patients only out of 576), hence the conclusions can not be easily deducted.

Despite these limitations, this study may have several clinical implications. First, to our knowledge, it is the first time to assess the association of platelet count with the risk of bleeding events in NVAF patients taking dabigatran in a prospective study. We carefully controlled for confounders by using standardized clinical and laboratory procedures. These strengths enabled the researchers to investigate the association between platelet count and bleeding independent of possible confounders. Second, to avoid bias caused by differences in treatment of antiplatelet agents, we carried out a sensitivity analysis focused on the patients without treatment of antiplatelet agents, the association between platelet count and bleeding events remained statistically significant (Table S1). Third, physicians should be conscious of the significant risk for bleeding associated with reduced platelet count among NVAF patients taking dabigatran.

In this multicenter, prospective and observational study, we found that a reduced platelet count was independently associated with an increased risk of bleeding events in NVAF patients who underwent catheter ablation and were taking dabigatran. Our study supports a nonlinear relationship between platelet count and the risk of bleeding events. Additional randomized studies may be warranted to confirm the causality of these observational results.

Reporting Checklist: The authors present the study in accordance with the STROBE reporting checklist. Available at http://dx.doi.org/10.21037/cdt-20-645

Conflicts of Interest: All authors have completed the ICMJE uniform disclosure form (available at http://dx.doi.org/10.21037/cdt-20-645). The authors have no conflicts of interest to declare.

Ethical Statement: The authors are accountable for all aspects of the work in ensuring that questions related to the accuracy or integrity of any part of the work are appropriately investigated and resolved. The study was conducted in accordance with the Declaration of Helsinki (as revised in 2013). The study was approved by the Second Affiliated Hospital of Nanchang University research committee (MISSION-AF, ClinicalTrials.gov Identifier: NCT02414035) and informed consent was taken from all the patients.