The incidence of STEMI is still high, 58 per 100,000 per year in European STEMI registry in Sweden (2). Proportion of STEMI in patients included in the Thai acute coronary syndrome registry was 55 percent and carried 5 percent in-hospital to 14 percent 1-year mortality rate, respectively (3).

The reperfusion therapy with either fibrinolytic agents or primary percutaneous coronary intervention (PCI) are performed to restore myocardial blood flow and to optimize myocardial salvage. Although reperfusion treatment improves survival of STEMI patients but the mortality after reperfusion is still high in the current practice.

The clinical predictors before and during treatment may help to identify high-risk STEMI patient who would benefit from an aggressive management. Elderly, previous myocardial infarction (MI), history of heart failure, increased pulse rate and lower systolic blood pressure at presentation, elevated of initial serum creatinine and cardiac biomarker levels, ST segment depression on presenting electrocardiogram, and not having a PCI, were the independent predictors for 6-month mortality in The Global Registry of Acute Coronary Events (GRACE) (4) and the previous report of Thrombolysis in Myocardial Infarction Risk score (TIMI) permit a fairly precise determination of the short-term mortality (5)

Echocardiography is recommended routinely to measure left ventricular ejection fraction (LVEF) in STEMI patient during hospitalization (6). LVEF may be improved with reperfusion therapy (7). There were limited number of studies to determine prognostic value of LVEF for in-hospital mortality in STEMI patients.

The objective of the study was to identify prevalence and factors associated with in-hospital mortality in acute STEMI patients after reperfusion. We present the following article in accordance with the TRIPOD reporting checklist (available at http://dx.doi.org/10.21037/cdt-20-398).

The study was a retrospective cohort design conducted in Surat Thani Hospital, a tertiary care center in the South of Thailand. The study was conducted in accordance with the Declaration of Helsinki (as revised in 2013). The ethical committee of Surat Thani Hospital, Thailand, approved the study protocol (No.19/2020) and individual consent for this retrospective analysis was waived.

We screened all patients with the discharge diagnosis of STEMI in Surat Thani Hospital between October 2015 and September 2017, using International Statistical Classification of Diseases and Related Health Problems 10 (ICD-10) codes I21.0–I21.3. The inclusion criteria were the STEMI patients who received reperfusion therapy either primary PCI or thrombolytic agent within 12 hours of symptom onset. Patients with alternative diagnoses (including coronary vasospasm or aortic dissection) or STEMI after hospitalization were excluded.

The diagnosis of STEMI was reviewed and confirmed by the interventional cardiologist (CW) according to the third universal definition of MI. Cardiogenic shock at presentation was defined using the definition from SHOCK Trial including: (I) systolic blood pressure (SBP) <90 mmHg for >30 minutes or required vasopressor support to maintain SBP >90 mmHg; (II) Evidence of end-organ damage (Urine output <30 mL/hour or cool extremities); (III) Hemodynamic criteria: Cardiac index <2.2 and Pulmonary capillary wedge pressure >15 mmHg. The LVEF was measured by a transthoracic echocardiogram (TTE) using the modified Simpsons or Teicholz method.

Of 500 patients with a discharge diagnosis of STEMI in Surat Thani hospital between October 2015 and September 2017, 431 patients were included into the present study. Majorities of the patients were male (80.5%) with mean age of 59.6 years. Almost half of the population had anterior wall MI, 30.1% had a cardiogenic shock, and 6.0% had a cardiac arrest at presentation. During the study period, 32 patients died (7.4%), and 399 survived during the index hospitalization. The clinical characteristics of non-survived and survived patients are shown in Table 1. The prevalence of chronic kidney disease, anterior wall MI, cardiogenic shock and cardiac arrest in non-survived group was higher than the survived group. Echocardiography was performed in 299 patients (69.4%) and the median LVEF in overall population was 51%. 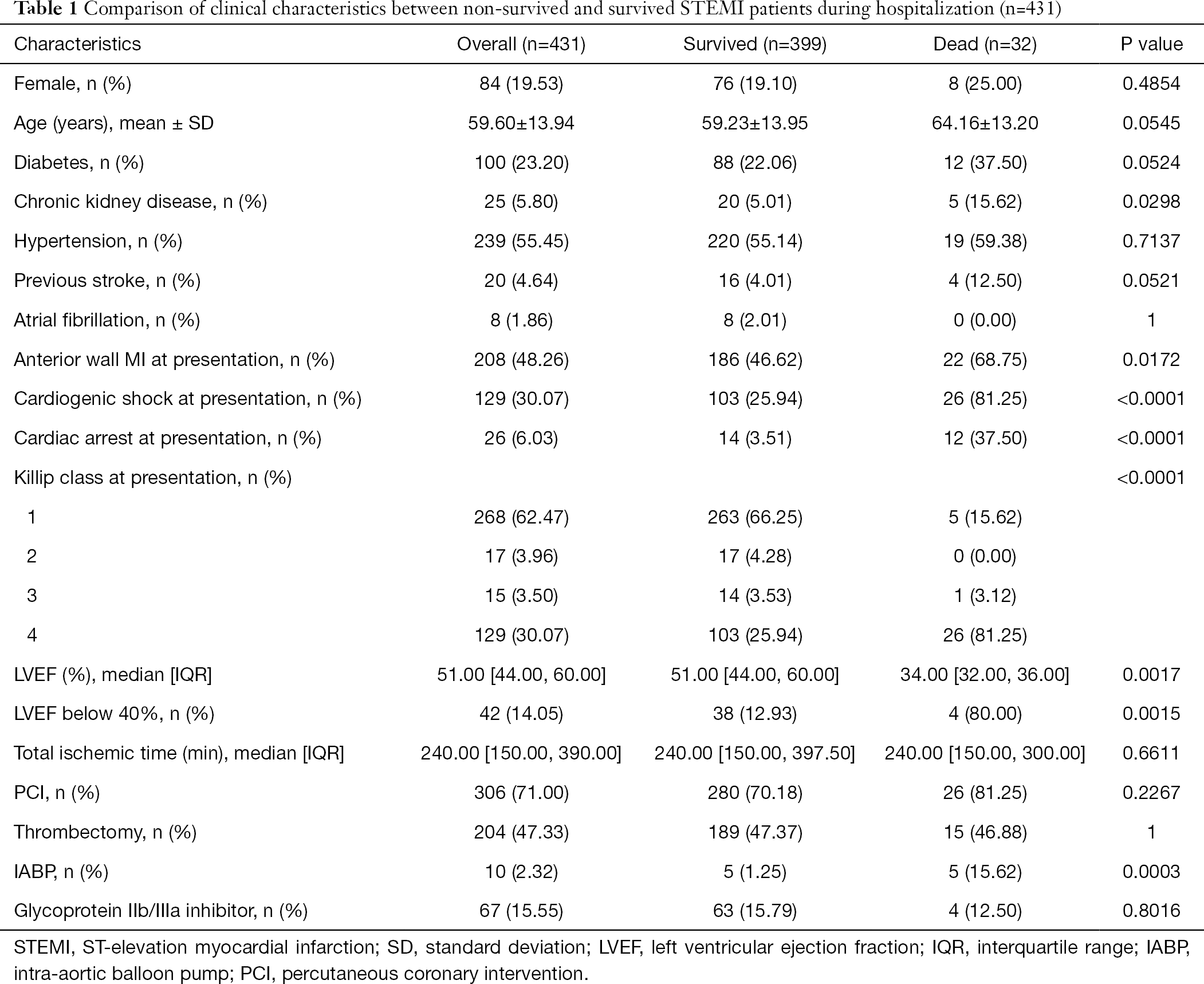 The prevalence of in-hospital mortality of the present study (eight percent) was less than Thai ACS registry (3) but higher when compared the study from Japanese study (8). The main reason come from the all patient received reperfusion treatment either fibrinolytic or PCI.

The our study was demonstrated that the lower LVEF (equal or less than 40%) and cardiac arrest at presentation were independent factors associated with in-hospital mortality of all comer STEMI patient. This finding was similar to the prognostic factor values for 1-year mortality in LVEF in acute coronary syndrome (both non-STEMI and STEMI) (11) and prognostic factor of in-hospital mortality in all STEMI undergoing primary PCI (12).

Therefore, echocardiogram to identify patient at a high risk of death while being hospitalized very necessary including evaluating and treating complications. The prognostic model to predict adverse outcome of STEMI patient after reperfusion should be add on from clinical presentation, severity score (13) and laboratory result (9) from previous study. The intensive treating and providing treatment after discharge should be provided especially in groups with evidence that the mortality rate could be reduced in patients with reduced left ventricular function: Angiotensin receptor antagonist, beta blocker, angiotensin receptor blocker, or mineralocorticoid receptor antagonist according to guideline (6).

In the patient was treated with ST-elevation myocardial infarction, all left ventricular function should be evaluated. In the case that any hospital was unable to performed echocardiogram while patient was admitted especially in developing country hospital (14), it should refer to the tertiary center which able to performed.

The results of the present study should be interpreted in the context of the following limitations. First, the study was conducted in a single tertiary center where the percentage of the patients treated with thrombolytic therapy is relatively high. Therefore, the results may not be applied to the area where the utilization rate of the primary PCI is high. However, thrombolytic therapy is still the primary reperfusion strategy in many areas of the world, in particular, the developing countries. Second, the retrospective nature of the study limits the completeness of the data collection; thereby, the missing data is unavoidable. Lastly, the assessment of LVEF was done by treating cardiologists in our hospital, and there was no assessment of the inter-observer variability between two observers. However, the data represents the information in the real-world setting, and the LVEF assessment by echocardiography was widely performed by cardiologists using standardized methods.

Funding: The study was supported by the Suratthani Medical Education Center, Suratthani, Thailand.

Reporting Checklist: The authors present the study in accordance with the TRIPOD reporting checklist. Available at http://dx.doi.org/10.21037/cdt-20-398

Conflicts of Interest: All authors have completed the ICMJE uniform disclosure form (available at http://dx.doi.org/10.21037/cdt-20-398). The authors have no conflicts of interest to declare.

Ethical Statement: The authors are accountable for all aspects of the work in ensuring that questions related to the accuracy or integrity of any part of the work are appropriately investigated and resolved. The study was conducted in accordance with the Declaration of Helsinki (as revised in 2013). The ethical committee of Surat Thani Hospital, Thailand, approved the study protocol (No. 19/2020) and individual consent for this retrospective analysis was waived.