For patients with coronary heart disease (CHD) with moderate ischemic mitral regurgitation (IMR), It is still controversial that (1) which patients can improve IMR from coronary artery bypass grafting (CABG) and avoid the additional injury caused by combined mitral valve surgery (2,3) and which patients cannot improve IMR from CABG and should be required simultaneous mitral valve surgery.

Previous studies (4,5) showed that a greater left ventricular ejection fraction (LVEF) and a greater posterior-inferior volume ratio are predictors of an improvement in IMR after isolated CABG. Conversely, left ventricular dysfunction (LVEF ≤40%), dyssynchronous movement between papillary muscles (PMs), and abnormal movement of the anterior wall of the left ventricle (LV) are risk factors for no IMR improvement after isolated CABG (6-8). These indicators are evaluated by echocardiography, which can be used to assess the structure and function of the LV, but not myocardial scarring.

Cardiac magnetic resonance (CMR) with late gadolinium enhancement (LGE) is the gold-standard imaging method for detecting myocardial scarring caused by myocardial infarction (MI) (9). IMR is the result of remodeling in the LV after MI (10); however, there are few studies on IMR and local remodeling of the LV, and the relationship between local remodeling of the LV after CABG and the change in IMR is not clear. We hypothesized that the severity of local LV remodeling was related to the improvement of IMR after CABG. Therefore, the purpose of this study was to evaluate the severity of infarction in myocardial segments connected to PM using LGE to predict whether IMR improves after isolated CABG and to optimize the surgical strategy and improve prognosis. We present the following article in accordance with the STARD reporting checklist (available at https://cdt.amegroups.com/article/view/10.21037/cdt-22-301/rc).

The patients’ baseline clinical characteristics, including demographic information, echocardiography, and LGE data, were retrospectively collected. Follow-up information was collected by telephone, WeChat, or outpatient visits. The patients were divided into two groups: the improved group (no or mild IMR) and the unimproved group (moderate or severe IMR) based on the severity of IMR, as assessed by echocardiography 1 year postoperatively. The baseline characteristics were compared between the two groups to identify the independent risk factors for moderate or severe IMR 1 year after isolated CABG. All patients provided written informed consent. The study was conducted in accordance with the Declaration of Helsinki (as revised in 2013). The study was approved by the Institutional Ethics Committee of Beijing Anzhen Hospital (No. 2016024) and informed consent was obtained from all the patients.

Figure 1 Transverse chest cardiac magnetic resonance scan and LV segment division. (A) The three white dashed lines divide the LV along its long axis into the basal segment, intermediate segment, and apex segment. The red arrows indicate the PM, and the yellow arrows indicate the myocardium connected to the PM. (B) Segments 1–6 comprise the basal segment, segments 7–12 comprise the intermediate segment, and segments 13–16 comprise the apex segment. The yellow parts (10, 11, 12, 15, and 16) are the five myocardial segments connected to PM. LV, left ventricular; PM, papillary muscle.

A conventional sternal median incision was made. The internal mammary artery was obtained by ossification or pedicling, and the great saphenous vein was obtained using an open technique. Transplantation of the left internal mammary artery to the left anterior descending branch was the first-choice technique, and the great saphenous vein was sequentially anastomosed to other coronary arteries. Complete revascularization was performed in all patients (12). Off-pump or on-pump CABG was performed according to the patient’s condition and surgeon’s experience. Transit-time flow measurement was used to evaluate the quality of coronary bypass vessel anastomosis.

The patients were returned to the intensive care unit with tracheal intubation and given ECG monitoring, ventilator assisted breathing, and hemodynamic monitoring. Arterial blood gas analysis was performed immediately after operation, on the first day after operation and before pulling out the endotracheal intubation, in order to timely adjust the water and electrolyte metabolism and acid-base balance disorders. Dual antiplatelet drugs were given on the first day after operation. Patients with heart failure and a reduced LVEF were treated with guideline-directed medical therapy, including angiotensin converting enzyme inhibitors (ACEIs), angiotensin-receptor blockers (ARBs), beta blockers, aldosterone antagonists, and/or sacubitril/valsartan (17).

The patients were followed up at 3 and 6 months postoperatively and every 6 months thereafter. Follow-up mainly included an assessment of whether IMR improved, New York Heart Association (NYHA) functional class, and the incidence of major cardiovascular and cerebrovascular events (MACCEs). An improvement in IMR was defined as no or mild MR, and no IMR improvement was defined as moderate or severe IMR by transthoracic echocardiography at 1 year after CABG. MACCEs included all-cause death, MI, heart failure, cerebrovascular events, and rehospitalization for heart disease. Coronary CTA results were also recorded. The patency of coronary bypass vessels was examined by coronary CTA and assessed according to the Fitzgibbon classification system (18). All patients’ data were obtained from our institution’s online database and collected using standardized data collection forms.

The Student’s t-test was used for normally distributed measurement data, which are expressed as mean ± standard deviation. The Mann-Whitney U test was used for non-normally distributed measurement data, which are expressed as median and interquartile range (P25, P75). The chi-square test or Fisher’s exact test was used for count data, which are expressed as frequency (rate). The Kaplan-Meier method was used to calculate the MACCEs-free survival curves of the two groups. The log-rank test was used to identify differences in the survival curves between the two groups. The univariate logistic regression analysis was used to assess the relationship between variables and no IMR improvement. Variables with a P value of <0.2 in the univariate logistic regression analysis and variables reported in previous studies, as well as variables considered clinically closely related to the endpoint events, were included in the multivariate logistic regression analysis using the forward stepwise method. The receiver operating characteristic (ROC) curve analysis was used to calculate the area under the curve (AUC), and the maximum Youden index (sensitivity + specificity − 1) determined the cut-off value for no IMR improvement after isolated CABG. All statistical tests were two-sided, and a P value of <0.05 was considered statistically significant. SPSS version 23.0 (IBM Corporation, Armonk, NY, USA) and R 4.0.2 (R Foundation for Statistical Computing, Vienna, Austria) were used for statistical analysis.

A total of 126 patients diagnosed with CHD complicated with moderate IMR who underwent an examination with LGE at Beijing Anzhen Hospital from January 2016 to December 2020 were continuously enrolled. Of the 126 patients, 3 received medication, 48 underwent mitral valve plasty (MVP) during CABG, and 14 had other heart diseases and underwent cardiac surgery. Sixty-one patients underwent isolated CABG; of these patients, 2 died of low cardiac output syndrome and heart failure postoperatively, 2 were lost to follow-up 1 year postoperatively, and 3 developed coronary bypass vessel occlusion 1 year postoperatively. Therefore, 54 patients with CHD complicated with moderate IMR who underwent isolated CABG were included in this study (Figure 2). 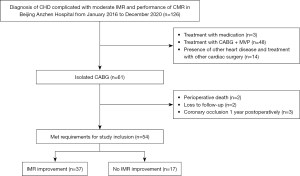 Demographic characteristics of patients in the two groups 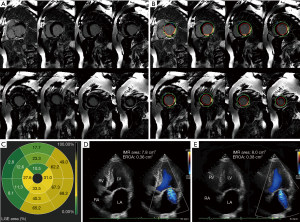 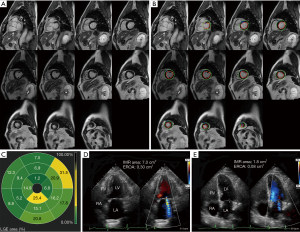 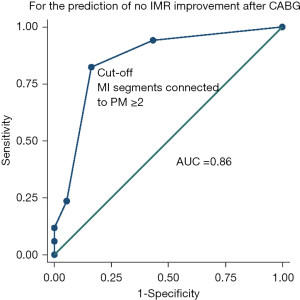 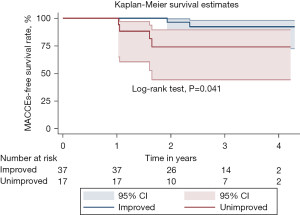 The crux of the current controversy is that the intervention strategy for concurrent mitral valve surgery in patients with CHD complicated with moderate IMR is unclear (1). To date, the largest randomized controlled trial of the Cardiothoracic Surgery Trial Network study (2) showed that although CABG + MVP could more effectively improve mitral regurgitation, it did not improve postoperative survival or reduce the overall incidence of adverse events and hospital readmission, and it was associated with early nervous system events (cerebral infarction, transient ischemic attack, and metabolic encephalopathy) and supraventricular arrhythmia. Therefore, rather than determining what type of surgery is the best option for these patients, the surgeon might consider which patients are suitable for CABG versus CABG combined with mitral valve surgery. This study analyzed patients receiving isolated CABG and found that nearly 1/3 of the patients had no IMR improvement, and the incidence of MACCE and NYHA functional class were higher than in the improved group.

IMR is a result of local LV remodeling caused by inferior or posterior wall infarction, and the main mechanism of IMR is PM displacement in the apical and posterolateral directions, leading to stretching of the chordae tendineae (10). The present study showed that the ratio of LGE mass to overall LV mass was not a risk factor for unimproved IMR, whereas the myocardium connected to PM in the unimproved group contained more MI segments. The improvement in IMR may be due to the reversal of local LV remodeling after revascularization, the improvement in local LV wall motion, and the reduction in chordae tendineae stretching. If the degree of infarction in the myocardium connected to PM is severe, LV local remodeling cannot be reversed after revascularization, and IMR cannot be improved. Therefore, we believe that IMR is mainly caused by local remodeling of the LV, which is consistent with the results of a previous study (4).

Several studies have revealed whether there is a correlation between IMR and PMI (19,20), showing that IMR is irrelevant to PMI. Similarly, Tanimoto et al. (21) concluded that IMR is caused by LV remodeling and that there is no evidence of a link to PMI. The results of the present study suggest that PMI is not associated with IMR improvement after isolated CABG. This is because the mitral valve-chordae tendineae-PM complex still exists after PMI. The function of the PM is not to contract to close the mitral valve, but to ensure that the mitral valve is in the proper position during ventricular contraction so that the mitral valve can be closed.

As described above, this study evaluated the number of MI segments connected to PM by CMR-LGE to predict whether IMR improved after isolated CABG in patients with CHD complicated with moderate IMR. The results showed that the number of MI segments connected to PM was an independent risk factor for no IMR improvement after isolated CABG. The results of this study are helpful to identify patients with improved IMR after isolated CABG, so as to make individualized diagnosis and treatment for such patients, reduce the incidence of MACCEs and improve the prognosis.

Limitations of the study

This study had several limitations. Firstly, this was a single-center, retrospective, observational cohort study with a small sample size. Thus, further verification in a multicenter, prospective, large-sample study is required. Secondly, the preoperative cardiac function of selected patients undergoing LGE was poor, which may have resulted in patient selection bias. Thirdly, the follow-up period was short; thus, a longer follow-up period is required to confirm our findings. Finally, because of the long LGE examination time at the postoperative outpatient department, some patients did not undergo postoperative LGE, preventing comparisons of the preoperative and postoperative imaging findings.

The authors would like to thank Emily Woodhouse, PhD, and Angela Morben, DVM, ELS, from Liwen Bianji (Edanz) (www.liwenbianji.cn), for editing the English text of a draft of this manuscript, and Jumatay Biekan (Circle Cardiovascular Imaging, Calgary, Alberta, Canada) for his assistance in image post-processing.

Reporting Checklist: The authors have completed the STARD reporting checklist. Available at https://cdt.amegroups.com/article/view/10.21037/cdt-22-301/rc

Conflicts of Interest: All authors have completed the ICMJE uniform disclosure form (available at https://cdt.amegroups.com/article/view/10.21037/cdt-22-301/coif). The authors have no conflicts of interest to declare.

Ethical Statement: The authors are accountable for all aspects of the work in ensuring that questions related to the accuracy or integrity of any part of the work are appropriately investigated and resolved. The study was conducted in accordance with the Declaration of Helsinki (as revised in 2013). The study was approved by the Institutional Ethics Committee of Beijing Anzhen Hospital (No. 2016024) and informed consent was taken from all the patients.