The current study is a retrospective cross-sectional study including 1,785 consecutive de novo AMI patients who received primary PCI from January 2007 to December 2017 at the National Cerebral and Cardiovascular Center in Suita, Japan (Figure 1). Myocardial infarction (MI) was diagnosed according to the European Society of Cardiology/American College of Cardiology Foundation/American Heart Association/World Heart Federation Task Force for the Universal Definition of MI (14). Primary PCI in ST-segment elevation myocardial infarction (STEMI) and non-ST-segment elevation myocardial infarction (NSTEMI) subjects was defined as PCI performed within 48 and 72 hours of symptom onset, respectively (15). 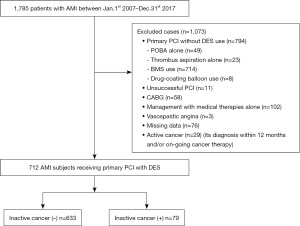 Of these, the current study excluded the following subjects: patients who treated by primary PCI without DES (n=794) [plain old balloon angioplasty alone (n=49), thrombus aspiration alone (n=23), bare metal stent use (n=714), drug-coating balloon (n=8)], patients with unsuccessful PCI (n=11), patients who received coronary artery bypass surgery for revascularization (n=58), those who were managed by medical therapies (n=102), those with AMI attributable to vasospastic angina (n=3) and missing data (n=76), and active cancer patients (= its diagnosis within 12 months prior to primary PCI and/or on-going cancer therapy) (n=29). The remaining 712 patients receiving primary PCI with DES were included into the current analysis (Figure 1). The study was conducted in accordance with the Declaration of Helsinki (as revised on 2013). The study was approved by the ethics committee of the National Cerebral and Cardiovascular Center (M24-055-7). Informed consent was not obtained in each subject due to the observational analysis of hospitalized patients.

Inactive cancer was defined as (I) its history for more than 12 months before the index of primary PCI and (II) subjects who did not receive any on-going cancer therapies (16). Cancer diagnosis, and its types and status were determined through medical record review, and when necessary, through a questionnaire by mail or telephone follow-up.

After identification of the culprit lesion on diagnostic coronary angiography, primary PCI was performed. All procedural decisions, including device selection, the use of mechanical support, and adjunctive pharmacotherapy were made according to the discretion of the individual PCI operator.

Loading of DAPT (200 mg aspirin + 300 mg clopidogrel or 20 mg prasugrel) was conducted prior to primary PCI. After the completion of the procedure, DAPT with its approved maintenance dose in Japan (100 mg/day aspirin + 75 mg/day clopidogrel or 3.75 mg/day prasugrel) was continued for at least 1 year. In patients with atrial fibrillation, anticoagulation agent [vitamin K antagonist (VKA) or direct oral anticoagulant (DOAC)] was added according to the Japanese Circulation Society guideline (9). The selection of P2Y12 inhibitor and anticoagulation agents was conducted by each physician’s discretion. The number of antithrombotic agents was analyzed as follows; single antiplatelet therapy (SAPT), dual antithrombotic therapy (DAT: DAPT or a combination of SAPT and DOAC/VKA) and triple antithrombotic therapy (TAT: a combination of DAPT and DOAC/VKA) (17).

Bleeding risk in the current subjects was evaluated by the Academic Research Consortium on high bleeding risk (ARC-HBR) and Japanese version of HBR criteria (Japanese-HBR). ARC-HBR defined HBR as a BARC (bleeding academic research consortium) 3 or 5 bleeding risk of ≥4% or a risk of an intracranial hemorrhage of ≥1% at 1 year after PCI. Patients are considered to be HBR in subjects who fulfilled at least 1 major or 2 minor published HBR criteria (18,19). With regard to Japanese-HBR, the Japanese Circulation Society has proposed it by considering additional clinical characteristics (low body weight, frailty, chronic kidney disease, heart failure, peripheral vascular disease) associated with bleeding events in Japanese patients (20-22). By incorporating ARC-HBR major/minor criteria and these ones, HBR in Japanese patients are defined as at least one major or 2 minor Japanese-HBR criteria (9).

The primary outcome was the occurrence of cardiovascular and bleeding events. The cardiovascular events consisted of a composite of all-cause death, non-fatal MI and ischemic stroke. Ischemic stroke was defined as lacunar infarction, atherothrombotic brain infarction or cardioembolic infarction. Bleeding events included major and minor ones defined by International Society on Thrombosis and Haemostasis. In brief, major bleeding was defined (I) fatal bleeding; and/or (II) symptomatic bleeding in a critical area or organ, such as intracranial, intraspinal, intraocular, retroperitoneal, intraarticular or pericardial, or intramuscular with compartment syndrome; and/or (III) bleeding causing a fall in hemoglobin level of 2 g/dL or more, or leading to transfusion of two or more units of whole blood or red cells. All non-major bleedings were considered as minor bleeding. The secondary outcome was the occurrence of (I) cardiovascular events; (II) bleeding events and (III) each component of primary outcomes (all-cause death, non-fatal MI, ischemic stroke, major and minor bleeding). These outcomes were firstly obtained through reviewing the medical records. If needed, questionnaire was conducted by mail or telephonic follow-up. A clinical event committee consisting of 2 cardiologists (HH and YK) and another referee (MF) in case of disagreement adjudicated all events based on the aforementioned original source documents of outcomes.

Continuous variables were expressed as the mean ± standard deviation and compared using the t-test if data were normally distributed. Categorical variables were compared using the Fisher exact test or the Chi-square test as appropriate. The Kaplan-Meier method was used to estimate survival curves for primary and secondary outcomes, and the log-rank test was used to assess differences between patients with and without inactive cancer. Unadjusted hazard ratios (HR) for primary and secondary outcomes were calculated by a univariate Cox proportional hazards model. Adjusted hazard ratios were calculated by a multivariate Cox proportional hazards model with a P value <0.10. All P values <0.05 were considered statistically significant. All analyses were performed with JMP version 13.0.0 (SAS Institute, Cary, NC, USA).

Anti-thrombotic and other medical therapy

Summary of cardiovascular and bleeding events 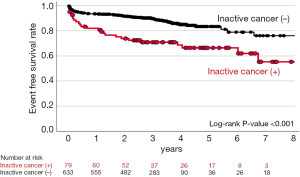 Figure 2 The occurrence of composite of cardiovascular and bleeding events in AMI subjects with and without inactive cancer. AMI, acute myocardial infarction.

Univariate and multivariate analyses of predictors for cardiovascular and bleeding events 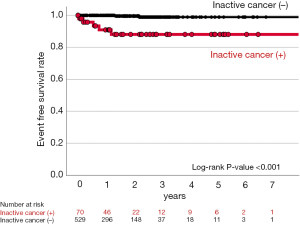 Currently, major criterion of ARC-HBR has included active malignancy, which is defined as its diagnosis within the past 12 months or cancer patients receiving ongoing cancer therapy, whereas cancer with its complete remission is not included (18). In the current analysis, most of inactive cancer subjects receiving primary PCI with DES were treated by DAT which included potent P2Y12 inhibitor, and the remaining subjects received TAT mainly using the combination of DAPT and VKA. Under these antithrombotic regimen, inactive cancer was associated with considerably elevated bleeding risks in AMI subjects. In particular, this greater risk in inactive cancer subjects was observed in both major and minor bleeding events. As shown in Table 1, inactive cancer subjects more frequently had anemia and chronic kidney disease. Anemia itself may associate with diminished function of platelet and more inflammatory activity which could elevate bleeding risks (30). Moreover, chronic kidney disease is accompanied by platelet dysfunction, and elevated levels of anti-Xa and additional abnormalities in the coagulation cascade (31,32). These characteristics in inactive cancer subjects may increase bleeding events after AMI. As such, our findings support inactive cancer as a potential major criterion for HBR in patients receiving PCI with DES.

Several caveats should be considered to interpret the current findings. Firstly, this is a retrospective, single-center observational study. Secondly, the selection of antithrombotic therapy and other medical therapies was conducted according to each physician’s discretion. Thirdly, due to the limited number of inactive cancer subjects, the current study does not have enough power to compare primary and secondary outcomes in those stratified according to cancer types. Fourthly, the current study’s period was from 2007 to 2017. During this period, guidelines for antithrombotic and lipid-lowering therapies has changed, which may affect cardiovascular and bleeding outcomes in study subjects. However, even after adjusting for the use of duration of antithrombotic therapy and low-density lipoprotein cholesterol (LDL-C), inactive cancer was still an independent predictor for the composite of cardiovascular and bleeding events. In particular, inactive cancer was an independent predictor for the bleeding events, but not for cardiovascular events.

In conclusion, concomitance of inactive cancer was observed in 11% of AMI subjects receiving primary PCI with DES. They more likely harboured ARC-HBR features with severer status of AMI. Furthermore, inactive cancer was associated with 2.14-fold greater likelihood experiencing cardiovascular and bleeding events. These findings suggest that inactive cancer status is not necessarily a low-risk but malignant feature which worsen their clinical outcomes, especially bleeding ones in AMI subjects receiving primary PCI with DES.

The current study was posted on the website of our institution (https://www.ncvc.go.jp/hospital/pub/clinical-research/untersuchung/untersuchung01/) to inform its detail and ensure that patients could refuse inclusion into the current analysis. When we contacted with participants by a mail or telephone, we explained the study subjects and then obtained informed consent.

Reporting Checklist: The authors have completed the STROBE reporting checklist. Available at https://cdt.amegroups.com/article/view/10.21037/cdt-22-306/rc

Conflicts of Interests: All authors have completed the ICMJE uniform disclosure form (available at https://cdt.amegroups.com/article/view/10.21037/cdt-22-306/coif). YK serves as an unpaid editorial board member of Cardiovascular Diagnosis and Therapy from September 2021 to August 2023, and has received research support from Nipro and Abbott, and honoraria from Nipro, Abbott, Kowa, Amgen, Sanofi, Astellas, Takeda and Daiichi-Sankyo. The other authors have no conflicts of interest to declare.

Ethical Statement: The authors are accountable for all aspects of the work in ensuring that questions related to the accuracy or integrity of any part of the work are appropriately investigated and resolved. The study was conducted in accordance with the Declaration of Helsinki (as revised on 2013). The research protocol was approved by the ethics committee of the National Cerebral and Cardiovascular Center (M24-055-7). Informed consent for publication was not obtained in each subject due to the observational analysis of hospitalized patients.