Dilated cardiomyopathy (DCM) occurs with an incidence of approximately 1:250 (1) and has a poor prognosis. About 10–50% of patients with DCM exhibit symptoms of cardiac failure within a year of the onset of DCM (2). According to current guidelines, patients with severe DCM [left ventricular ejection fraction (LVEF) <35%] are at a higher risk of cardiovascular events and should receive defibrillator implantation, resynchronization therapy, or heart transplantation (3). Therefore, the evaluation of the prognosis of dilated cardiomyopathy can provide help for the clinical management of the disease.

DCM is often associated with left atrial enlargement and impairment of left atrium (LA) reservoir function, conduit function, and pump function (4,5). The previous article reported that left atrial volume index was a prognostic factor for dilated cardiomyopathy (6). But the left atrial function cannot be fully explained by the degree of left atrial dilation in dilated cardiomyopathy (7). Strain and strain rate reflect various aspects of myocardial deformation and both measure different aspects of overall heart function, which can be used to assess risk, fatality rate, and prognosis of heart attack (8-10). Recently, Dr. Li and his colleague found that left atrial reservoir and conduit strain are independent predictors of clinical outcomes in idiopathic dilated cardiomyopathy (11). Simultaneously, left atrial strain rate (LASR) has good prognostic value in atrial fibrillation (12) and rheumatic heart disease (13). However, the prognostic value of LASR in patients with DCM is unknown, and published research articles on LASR and DCM are presently lacking.

Previously, left atrial strain and strain rate can be assessed with echocardiography. However, the echocardiography examination is limited by heavy interference of gas exchange in the lungs and a low signal-to-noise ratio. In recent years, cardiovascular magnetic resonance (CMR) has been widely used in the imaging LA of cardiomyopathy (14,15). Cardiac magnetic resonance feature tracking (CMR-FT) could provide prognostic information regardless of LA size (16) and be superior to 2-dimensional echocardiography and exhibit outstanding inter-study reliability in normal, dilated, and hypertrophic hearts (17).

Therefore, this study aimed to investigate the prognostic value of left atrial strain and strain rate in dilated cardiomyopathy using CMR imaging. We present the following article in accordance with the STROBE reporting checklist (available at https://cdt.amegroups.com/article/view/10.21037/cdt-22-305/rc)

This is a single-center retrospective cohort study. The patients with severe idiopathic DCM who underwent CMR imaging at Guangdong provincial people’s hospital from March 2015 to March 2017 were selected for the analyses. The severe idiopathic DCM was diagnosed based on the World Health Organization/International Society and Federation of Cardiology criteria (18). The exclusion criteria were as follows: (I) patients with congenital heart disease (CHD); (II) patients with valvular disease; (III) patients having significant coronary artery disease (defined as showing at least 50% luminal stenosis), previous coronary revascularization, or myocardial infarction(19); (IV) patients with an estimated glomerular filtration rate less than 30 mL/min/1.73 m2 or implanted devices (20); (V) LVEF ≥35% in CMR (21). A flowchart of the study design and timelines is presented in Figure 1. 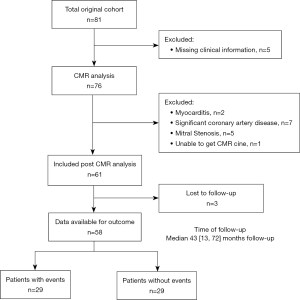 Figure 1 Flow chart of the study design. At baseline, we analyzed parameters of left atrium function in all patients and classified them into two groups according to the presence of the cardiac event. Patients were followed for 92 months. CMR, cardiac magnetic resonance.

A 3T scanner was used to perform the CMR imaging (Ingenia; Philips Medical Systems, Best, The Netherlands). Procedures and setting up parameters followed the instrument guidelines (22). The 32-element body coil for reception was adopted to transmit radiofrequency signals. A stack of short-axis single-shot balanced-standard steady-state free-precession sequence images was collected from apex to base with the two-, three-and four-chamber views.

The LA endocardial border was manually delineated on two- and four- chamber cine images (avoiding pulmonary vein and atrium appendage) when the atrial volume was at its highest and lowest points (Figure 2A,2B). The shape was then replicated automatically over all frames of the whole cardiac cycle (25 frames per cardiac cycle). To ensure proper tracking, the CMR-FT was visually verified. The propagation algorithm was reapplied after the manual adjustment of the endocardial border in cases of unsatisfactory tracking. LA strain rate was calculated as the average of the values from two and four-chamber views (23). In both the two- and four-chamber views perspectives, tracking was performed three times with a blinded mode to obtain the LA volume and strain rate from the three tracking repetitions being averaged in both views. As previously stated, three characteristics of LA strain rate were analyzed (24) (Figure 2C), peak positive strain rate (referring to the function of the LA reservoir), peak late negative strain rate (referring to the function of the LA booster pump), and peak early negative strain rate (corresponding to LA conduit function). Accordingly, three strain rate (SR) parameters such as SRs, SRa, SRe were evaluated (Figure 2D). The analyze of left atrium strain rate may take 5 minutes per patients. The details of CMR-FT analysis of left ventricular global longitudinal strain (LVGLS), left ventricular global circumferential strain (LVGCS) and left ventricular global radial strain (LVGRS) are in a previous study (25). 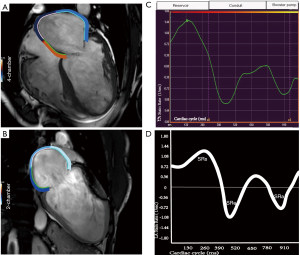 Clinical events were defined as a combination of all-cause death, treatment with implantable cardioverter-defibrillator (ICD), hospitalization for cardiac failure, and heart transplantation. Death was adjudicated by a combination of medical record review, reports from family members, and reviewing available death certificates. Follow-up information was retrieved from clinical records, death certificates, and correspondence.

For descriptive data, the data were reported as the means ± standard deviation or median and interquartile range for continuous variables and follow-up times, respectively. The number and percentage were used for non-missing values of categorical variables. The relationship between the two continuous variables was assessed by Pearson’s r and Spearman’s rho as appropriate.

For all survival analyses, follow-up was up to a maximum of 92 months. The Kaplan-Meier method for significance testing using log-rank statistics illustrated the cumulative probability of endpoints. Univariate and multivariate predictors of event-free patients were assessed using Cox’s proportional hazards models. The time-dependent receiver ROC was used to further assess and confirm the independent predictors’ predictive performance (26).

The variance inflation factor (vif) was assessed to avoid collinearity. A parameter with a vif greater than 4 was excluded from the multivariate analysis (27).

A P value (two-sided) of less than 0.05 was considered statistically significant. SPSS software [Statistical Package for the Social Sciences (SPSS) version 26.0; Armonk, NY, USA] and R version 4.0.2 were used for all statistical analyses (R Foundation, Vienna, Austria). The “survival” and “timeROC” functions were used for the analyses.

The study was conducted in accordance with the Declaration of Helsinki (as revised in 2013). The retrospective cohort study was approved by the Research Ethics Committee of Guangdong Provincial People’s Hospital, Guangdong Academy of Medical Sciences (No. KY-Q-2021-130-02) and written informed consent was obtained from all subjects.

Of the 61 patients who met the inclusion criteria for the study, 3 patients were not followed up on and 58 patients were followed up for a median of 43 months (IQR, 13–72 months) (Figure 1). During the follow-up period of 92 months after enrollment, adverse cardiovascular events developed in 29 (50%) patients, all-cause death occurred in 15 participants (25.8%), ICD treatment was performed in 5 participants (8.6%), hospitalization due to heart failure occurred in 8 participants (13.8%), and heart transplant was performed in 1 participant (1.7%). Regarding clinical characteristics (except age, P=0.007), hemodynamic parameters, and comorbidity parameters (except hypertension, P=0.020; diabetes, P=0.014), there were no significant differences between patients. Some clinical, hemodynamics and comorbidities characteristics of participants were missing. But each variable of interest had no missing value. The clinical, hemodynamic and comorbidity characteristics of patients are presented in Table 1.

Characteristics of participants with and without event 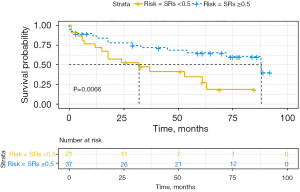 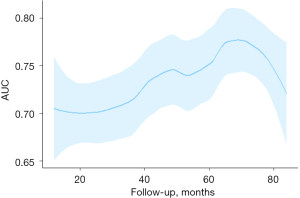 Correlation between LA strain rate and other parameters

LA strain rate parameters were reproducible both within and between observers. Bland-Altman plot analysis as well as Intraclass correlation coefficient for strain rate measurements are shown in Table S2. The analysis of intra-observer measurements revealed a high level of congruence. For SR, the minimum and maximum standard deviations were 0.2 and 0.32, respectively. Intraclass correlation for 95% of patients was 0.844 (0644 to 0.932), and 0.948 (0.883 to 0.978). Bland-Altman analysis and intraclass correlation efficient (ICC) showed no evidence of any significant difference regarding inter- and intra-observer variability. The results are in Table S2.

The volume of the LA was a prognostic factor of DCM. Gulati et al. (28) reported that LAVi was a strong predictor of transplant-free survival and HF outcome in DCM. Our results demonstrated that the LA volume index also provided a significant prognostic value, which was consistent with a previous study (6). This might have related to the pathology and mechanism of dilated cardiomyopathy. Dilated cardiomyopathy is characterized by left ventricular dilation associated with systolic dysfunction. Diastolic dysfunction and impaired right ventricular function may occur (29,30). LA dilation can explain the left ventricular dilation dysfunction to a certain extent. While the degree of left atrial dilation cannot fully explain left atrial dysfunction in dilated cardiomyopathy (20). Compared with ischemic patients, LA booster pump function was inhibited in idiopathic DCM, even under the same load conditions (31). Moreover, D’Andrea et al. (32) reported that although the LA maximum volume had no difference in all analyzed atrial segments, the peak systolic myocardial atrial strain was significantly lower in patients with idiopathic DCM than in ischemic DCM. The evaluation of LA function is very significant in predicting the occurrence of cardiovascular events. Both strain rate and strain were relatively independent of holistic heart function and they reflected different aspects of myocardial deformation (33). Previous reports indicated that LASR had prognostic value for atrial fibrillation (12) and rheumatic heart disease (13). But as far as we know, no reported research were made on the prognostic value of LASR in severe idiopathic DCM patients. In our study, LASRs and LASRa were found to be powerful prognostic markers from univariate analysis. This may have been due to LA reservoir function, and pump function might be useful in estimating left ventricular filling pressure (23). LA reservoir strain to store blood during ventricular systole was an independent predictor of cardiovascular events in myocardial infarction (34) and dilated cardiomyopathy (11). And in our study, after adjustment for model 1 and model 2, LASRs exhibited independent prognostic value.

First, the insufficient number of patients was one of the important limitations in our study, which might have reduced the weight of evidence. In addition, another important limitation of this study is that this study was conducted in one hospital with a single CMR imaging protocol and explanation. A multi-institutions study is required to validate our conclusions. What’s more, some clinical, hemodynamics, and comorbidities characteristics of participants were missing. However, a sensitivity analysis using multiple imputations to account for missing data showed similar findings to the primary analysis (Table S1). Finally, the cutoff of LASRs should ideally be derived from a larger healthy populations. The cutoff of LASRs (0.5 sec−1) in our study obtained from time-dependent ROC analysis of the 58 participants could not represent the true effect.

Reporting Checklist: The authors have completed the STROBE reporting checklist. Available at https://cdt.amegroups.com/article/view/10.21037/cdt-22-305/rc

Conflicts of Interest: All authors have completed the ICMJE uniform disclosure form (available at https://cdt.amegroups.com/article/view/10.21037/cdt-22-305/coif). The authors have no conflicts of interest to declare.

Ethical Statement: The authors are accountable for all aspects of the work in ensuring that questions related to the accuracy or integrity of any part of the work are appropriately investigated and resolved. The study was conducted in accordance with the Declaration of Helsinki (as revised in 2013). The retrospective cohort study was approved by the Research Ethics Committee of Guangdong Provincial People’s Hospital, Guangdong Academy of Medical Sciences (No. KY-Q-2021-130-02) and written informed consent was obtained from all subjects.