Prevalence of congenital heart disease (CHD) worldwide is 0.69–0.93% with the highest prevalences in Europe and Asia, severe CHD are found in 2.5–3/1,000 live births (1,2). Patients with CHD often require specialized pediatric cardiologic care. In the context of treatment of critically ill pediatric patients it may be necessary to perform investigations such as CT or MR scans which take place spatially separated from the ICU (3). As the therefore needed intrahospital transport is particularly hazardous the indication should be assessed critically. Furthermore, it is essential to ensure the cardiorespiratory stability and safety of the patients during transport and investigation as well as continuous ventilation (4,5). On this occasion, especially the monitoring of vital signs is a relevant factor to reduce mortality and morbidity and an experienced physician and a specialist nurse are recommended to survey the transport (6-8). The frequency of occurrence of adverse events (AEs) during the absence from the ICU varies interestingly wide from 1.7–79.8% according to different studies (5,9-11). This high variation may be due to very heterogenous patient groups in the different studies and the lack of a standardized definition of AEs (10). Common AE are a decrease of the blood pressure (BP) and venous oxygen saturation (SpO2), heart rate (HR) fluctuation and arrhythmia (5,9,10,12). AE occur more often during the transport of critically ill pediatric patients than during the transport of adult patients with 60% of pediatric intensive care patients showing a deterioration of vital signs (13,14).

The aim of our study is to evaluate the safety of intrahospital transport using a transportable ventilator versus conventional manual bag ventilation in intubated ventilated pediatric intensive care patients with CHD. We present the following article in accordance with the STROBE reporting checklist (available at https://cdt.amegroups.com/article/view/10.21037/cdt-22-384/rc).

We analyzed data of ventilated pediatric intensive care patients with CHD who underwent intrahospital transport for CT or MR scans. The study was performed as a retrospective monocentric case-control study covering a 10-years period. Only data that was collected and stored as part of routine clinical practice was used. The study was conducted in accordance with the Declaration of Helsinki (as revised in 2013). The study was conducted in a retrospective approach and was reviewed and approved by the ethical review board of the Technical University of Munich (approval number: No. 155/19 S-SR).

During the period of January 2009 to December 2019, 63 ventilated pediatric intensive care patients with CHD underwent intrahospital transport for CT or MR scans at a tertiary care cardiac center. Twenty-three female and 40 male patients at an average age of median 2 months (range 0 to 37 months) were included in the study. Only patients ≤48 months with CHD who were intubated orotracheally or nasotracheally for ventilation on the ICU were selected for the study. All patients who met the previously mentioned criteria and who were accompanied ventilated to CT or MR scans were included in the study. Exclusion criteria were intubation in the radiology department and an incomplete patient record. A detailed description of the underlying diseases and purposes of the CT and MRI can be found in Tables 1,2.

The patients were divided into two groups. The first group contains patients who were ventilated manually during transport, the second group got ventilated mechanically using a MR-compatible transportable ventilator (HAMILTON-MR1, Hamilton Medical AG, Bonaduz, Switzerland). The group allocation was not at random but chronologically as it was a standard procedure to manually ventilate patients during transport until the mentioned transport ventilator got introduced to the ICU and the mechanical ventilation turned standard. Vital signs and blood gas data were collected both before and after transport. The following study items were recorded: number and type of AE, duration of the absence from the intensive care unit, need and dosage of catecholamine therapy before and during transport. Since most of the patients in this cardiac ICU are in a postoperative state, we only examined the additional need for catecholamines or an additional dosage of catecholamines for patient transport to CT of MR scanning. AE were defined as patient-related events, e.g., a significant change of vital signs or an increased need of catecholamine therapy. 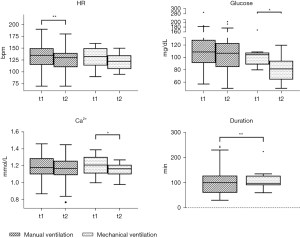 In total 9 (14.3%) AE occurred during transport and investigation, 7 (13.7%) in the manually ventilated group. They all consisted of a drop in mean arterial pressure (MAP), requiring adaptation of therapy. In the mechanically ventilated group 2 (16.7%) AE were found which as well consisted of a drop in MAP requiring adaptation of therapy. In both groups no hazardous AEs were recorded. A detailed description of the occurred AE is shown in Table 3.

Complete vital signs and blood gas data of the manually and mechanically ventilated groups are shown in Table 4.

The duration of transport plus MR/CT scan was significantly lower in the mechanically ventilated patient group than in the group that got ventilated manually. As the duration of the intrahospital transport is associated with the occurrence of AE, patients might benefit from mechanical ventilation during intrahospital transports for that reason (15-17). The reduction of the time of absence from the ICU was especially visible in the patient group that underwent MR scans. The reduced duration may potentially be explained by faster MR sequences and more experienced team over the past years as it was already shown in a study regarding MR scans to detect musculoskeletal infections in infants (18).

The frequency of occurrence of AE of 14.3% during all performed intrahospital transports and investigations is in the low range compared to AE described in former reports [1.7–79.8% (5,9-11)]. This might be due to continuous monitoring of the serious compromised patients, the thorough preparations before leaving the ICU and the fact that only patient-related AE were analyzed in this study. No hazardous AE occurred and adjustments of catecholamine therapy were not in the context of a CPR.

The HR decrease that was found in both the manually and mechanically ventilated group was potentially caused by a deeper sedation of the patients during transport and investigation (19). Regarding the other vital signs there was no significant change between the time before leaving and after returning to the ICU found. This might also be due to the continuous monitoring of the patients (8).

The high variation of the patients’ PaO2 values could be due to the patient collective itself with many patients suffering from a cyanotic CHD. We expected to find a difference in the steadiness of the PaCO2 between the manually and mechanically ventilated group as mechanical ventilation promises a dedicated continuous monitoring. As no difference found in PaCO2 values, mechanical ventilation is not an advantage in this respect. As carrying along of more than 4 infusions during transports is associated with a higher risk for AE, the clinical practice has changed to limiting the amount of infusions for the period of absence from the ICU (15). In this context, the significant decrease of the blood glucose levels in the mechanically ventilated group might be explained. The tendency to hypoglycemic conditions in connection with intrahospital transport has been described before (20). In contrast one would expect an increase in blood glucose levels due to the increased stress level during transport and examination. Instead, a decrease in blood glucose levels occurred, so the reduced number of infusions that were carried along is a likely explanation. The dropped Ca2+ levels after transport and investigation in both groups might be a sign of hyperventilation. But since short-term hyperventilation is not meant to cause a decrease of calcium levels it is likely that the dropped Ca2+ levels after transport and investigation in both groups is also due to the limited amount of infusions carried along during the absence from ICU (21).

A limitation of the study is the small number of cases, especially in the mechanically ventilated group. Due to the retrospective study design, the data are dependent on the care and completeness of the transcription by the persons involved in the transport. Furthermore, only AEs directly related to the transport were analyzed, which is why no conclusions can be drawn about long-term complications such as a prolongation of the hospital stay as it has been described before in the literature (22).

Overall, we consider both manual and mechanical ventilation safe for intrahospital transport and investigations in pediatric intensive care patients with CHD. With that knowledge the decision to perform an investigation of a critically ill pediatric patient outside of the ICU might be eased. Still, the indication for a therefore needed intrahospital transport with its imminent AE has to be considered thoroughly and the transport itself should follow the recommended guidelines.

Reporting Checklist: The authors have completed the STROBE reporting checklist. Available at https://cdt.amegroups.com/article/view/10.21037/cdt-22-384/rc

Conflicts of Interest: All authors have completed the ICMJE uniform disclosure form (available at https://cdt.amegroups.com/article/view/10.21037/cdt-22-384/coif). The series “Current Management Aspects in Adult Congenital Heart Disease (ACHD): Part V” was commissioned by the editorial office without any funding or sponsorship. The authors have no other conflicts of interest to declare.

Ethical Statement: The authors are accountable for all aspects of the work in ensuring that questions related to the accuracy or integrity of any part of the work are appropriately investigated and resolved. The study was conducted in accordance with the Declaration of Helsinki (as revised in 2013). The study was conducted in a retrospective approach and was reviewed and approved by the ethical review board of the Technical University of Munich (approval number: 155/19 S-SR) and individual consent for this retrospective analysis was waived.