Since Osler’s first description in 1885 (1), the clinical features of infective endocarditis (IE) have significantly changed (2,3). Nowadays, the population at risk is different due to several reasons: a decrease in rheumatic heart disease, an increasing percentage of elderly people (4), comorbidities, nosocomial exposures (5), prosthetic valves (6), intracardiac devices (7), intravenous drug addicted, and hemodialysis patients (8). A microbiological shift from streptococci to staphylococci as the most frequent pathogens has been reported (9,10). New prophylaxis guidelines (11,12) have been published, new antibiotics are available and, finally, bacterial resistances are increasing (13).

Most epidemiological studies on IE involve Hospital case-series of referral centers suffering from selection bias (14). Population-based investigations are more accurate but well conducted prospective studies are few (15), study designs are often inaccurate, undersized or lacking in important clinical data, criteria for definite diagnosis are not always clear and follow up data sometimes incomplete, as remarked by recent meta-analysis (16,17). These authors conclude with a call for “urgent well conducted prospective case-series population studies”. Sampling from different populations at risk, diverse diagnostic criteria, inclusion of cases with diagnosis of “possible” IE and referral bias may explain the wide range of incidence rates reported, even in the same country, from 1 to 15 cases per 100,000 per year. A wide range of global mortality is reported too, from 4% to 48% and temporal trend analyses describe an increasing incidence of IE, without a decrease in mortality rate, but these data need confirmation (18). Among population-based studies, discordant data are also present in the percentage of surgically treated patients that ranges from 12.8% to 49% (13).

Aim of our study was to evaluate the contemporary epidemiological trends, over a 17-year period in a definite region of Tuscany, Italy, and to analyze the clinical outcomes and associated prognostic factors.

A prospective case-series population study was conducted among residents in the province of Grosseto, Italy. The Cardiological Department at Misericordia Hospital is the referral center for three first-level hospitals covering the entire province. From 1 January 1998 to 31 December 2014, all patients referred to our center for a suspected IE were prospectively entered in a data-base if criteria for a definite diagnosis were fulfilled (19,20). The average annual population of the province was 217,778 (99.8% caucasian, average age 45.7 years).

The incidence rate per 100,000 inhabitants per year was calculated. The temporal trend was statistically examined using the Cochran-Amitage test. Presence of gender differences on incidence rate, surgery and mortality were evaluated. Hospital mortality was defined as death occurring at any time during the diagnostic hospitalization. Categorical variables were expressed as percentages and were evaluated with the χ2 test. Continuous variables were expressed as mean ± standard deviation (SD) and were assessed by independent sample Student’s t-test. Those variables with univariable significance at the 0.1 level were tested for multivariable significance by logistic regression analysis.

Actuarial survival analysis was performed using the Kaplan-Meier method, with the day of diagnosis as the starting point; in-hospital and one-year survival were estimated. Survival curves were compared using the log-rank test. Factors that affected survival at the 0.1 level were analyzed with the Cox proportional hazard model. 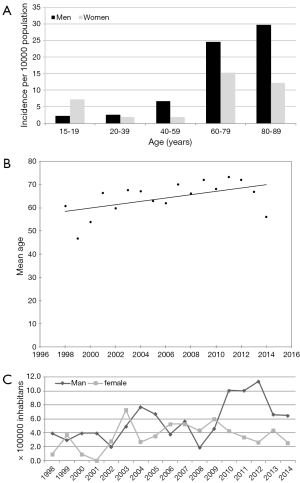 Over the 17 years there was a significant linear increase of the incidence rate that was confirmed even when native and prosthetic IE trends were separately analyzed (P=0.03 and 0.04 respectively). One hundred three patients (60.6%; 95% CI: 53–68) were males with male/female ratio of 1.54:1. No significant gender differences were present at the temporal trend analysis, Figure 1C. 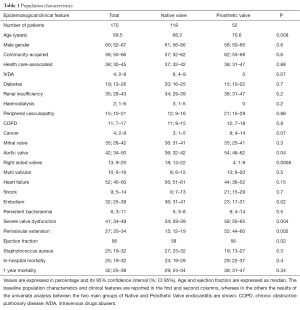 The most common infective organism, isolated in 42 patients (25%; 95% CI: 19–32), was Staphylococcus aureus, followed by coagulase-negative staphylococci in 38 patients (22%; 95% CI: 16–30), as shown in Table 2. Staphylococcus aureus was the causative microorganism in 71% of intravenous drug addicted and 47% of patients with septic shock. Both in community-acquired and healthcare-associated IE, S. aureus was the most frequent causative agent. Streptococcus viridans and enterococcal IE were mainly community-acquired, whereas enterobacteriaceae/gram negative forms were nearly equally distributed between community and nosocomial origin. Incidence of staphylococcus aureus IE did not increase in the study period, P=0.95, not confirming previous studies results (10,22,23). Culture negative IE’s were 11%, a lower prevalence than recently reported in European countries (24,25).

The most common indication for surgery was heart failure in 52 (66%; 95% CI: 54‒76) followed by severe native valvular dysfunction in 29, perivalvular extension in 23, prosthesis obstruction in 2. High embolic risk was present in 51. Perioperative mortality was 22.8% (95% CI: 14‒34%). 23 patients (29%; 95% CI: 20‒41) were operated on within the first 10 days after the diagnosis of IE. In permanent PM lead infections, percutaneous lead extraction was performed in 5 patients and surgical removal in one. Medical treatment alone was effective in another case.

Course and predictors of mortality

At least one complication was present in 131 (77%): heart failure 52.3%, embolism 32%, shock 8.8%, severe valvular dysfunction in 41%, locally uncontrolled infection in 26.5%, prosthesis leak in 10.6% and prosthesis obstruction in 1.8%. Healthcare-associated IE did not result a risk factor for mortality, survival rate was similar to that of community-acquired forms, P=0.5. 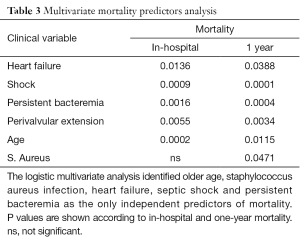 The study revealed an IE incidence rate of 4.6/100,000/y. The temporal trend analysis showed an increase in the incidence rate and an increasing number of patients with higher age and with healthcare-associated IE; on the contrary no improvement in survival over the period was observed and no temporal trend in the causative microorganisms was found. Similar results were reported by other surveys (18). Methodology is the main peculiarity of our study: the final dataset derived from the results of 2 data-bases, the Institutional prospective collection of consecutive cases and the Health Care System discharge codes. Epidemiology of IE should derive from population-based surveys but they represent only 17% of current literature (16,17). Most studies suffer from referral biases and this explain why even in the United States the reported incidence varies from 1.7 up to 15 cases per 100,000 as reported by in a recent retrospective study. Pant found a higher incidence compared to previous literature and to our study, ranging from 11 to 15 per 100,000 population from 2000 till 2011 (22). This was a retrospective, not controlled study, in which the incidence was probably overestimated as medical records were not checked to verify the correctness of the diagnosis; moreover, it was impossible to determine whether a patient had been hospitalized more than once.

In our study, the check of the hospital records of the 194 patients found in the ICD codes data-base, revealed that in 25 (13%) criteria for definite IE had not been fulfilled and in 28 cases (14%) the same patient had been repeated due to hospital readmissions (in most cases surgical patients). Therefore, 53 (28%) false positive cases of IE were discovered by revising of the discharge sheets. On the other hand, the discharge codes data-base missed 27 cases (14%) which were not in our case series. The lack of proper validation studies for the ICD codes for IE is a limitation. Our data confirm that epidemiological studies, performed only on discharge sheet ICD codes, are not reliable. There are coding issues and different practices among doctors and hospitals; a better standardization is needed. Merging the two data-bases allowed a quality control and greater accuracy; this may explain why the incidence rate was higher than previously reported by other prospective European studies (13,23). Hoen estimated an incidence of 3,1/100.000 per year but an under-reporting may have been due to the absence of an “active search” of cases by investigators (13). In the Euroheart Survey, 159 patients were affected by IE (accounting for 3.2% of the total population). However, the study design did not allow for a precise assessment of the prevalence of the disease (24). Incidence of IE affecting cardiac implantable electronic devices is a raising problem not yet explored in prospective studies. Among the new PM implantations we found an incidence of 2/1,000. A frequency of 1,14/1.000/y was retrospectively reported by Uslan (25). The incidence of definite IE over 65 years was 11.7/100,000/y, significantly higher than in the total study population. Our data confirm that elderly forms, over 65 years, are associated with poor prognosis and higher than 1-year mortality rate even in the multivariate analysis (P=0.0127). In accordance to other experiences, we can confirm an increasing mortality trend, although with a borderline significance (18). Ageing population and healthcare-associated infections may explain the rise of IE incidence (26-28). The new guidelines raised some concerns about the appropriateness of suspending the antibiotic prophylaxis for prevention of IE (29), and an increase of IE has been reported by the AEPEI investigators (30) and recently by Dayer in the United Kingdom (31). Whether the restriction to antibiotic prophylaxis recommended by the recent guidelines, may have contributed to the temporal trend increase is difficult to ascertain by our results and larger studies are needed (12). Increasingly attention to the correctness of the DGR codes attribution over the years may also contribute to the increasing trend result.

The temporal trend analysis did not show gender differences in the incidence rate. No gender differences were present even in the surgery procedures, P=0.9 or in mortality, P=0.2. Since the 80s no significant increase in survival has been reported and nowadays the mortality rate remains high (32) in spite of recent medical and surgical advances. On the contrary, a trend towards an increased mortality has been reported and in recent years (18,32). The widespread of diagnostic modalities with subsequent greater ease of discovery, population ageing and increase invasiveness of modern medicine may justify the absence of survival improvements and our data seem to confirm this trend. A limit of the study may be that 170 cases is not a big number but, given the accurate methodology, our results may reflect the current epidemiological trends in Western countries. Few epidemiological case-series studies on the topic have been recently published, and our data are in line with a similar study performed in Italy in Veneto Region which reported an incidence of 4.9/100.000/year (18).

Our study confirms an increasing mortality trend in IE, although with a borderline significance. Elderly forms are associated with poor prognosis and higher than 1-year mortality rate even in the multivariate analysis. Ageing population, increase in healthcare-associated and staphylococcal infections, may explain the rise of IE incidence and of the mortality trend.

A special thank Dr. Paolo Nardini and Cinzia Mori on behalf of the Epidemiological Team of the local Sanitary Service for the DRG data collection and Dr. Alessia Andreini of the Province Statistical Service who elaborated the ISTAT (National Institute of Statistics) data.

Ethical Statement: The study was approved by the institutional Ethics Committee (Azienda Sanitaria Toscana). The work was performed at Misericordia Hospital Grosseto, Italy and written informed consent was obtained from all patients.