Removal of most intracardiac or intravascular masses requires surgical excision (1); however, the surgical approach might not be suitable for critically ill patients. Less invasive percutaneous aspiration devices can be used for this group of patients (2). Conventional aspiration devices (e.g., Greenfield embolectomy 10 French catheter) can remove occlusive thrombus by adjunctive maceration; however, their small caliber size and weak aspiration force limit their ability to remove solid masses larger than 1 cm (1). On the other hand, conventional therapy has significant peri-procedural risk, which precludes their use in some encounters (3,4). Thrombolytics have an overall bleeding risk of 22%, with up to 3% intracranial bleeding and risk of distal embolization of large mobile thrombi (2,3). One study reported a case fatality for surgical embolectomy of 39–40% in unstable patients and 23–27% in stable patients with pulmonary embolism (PE) (3). The United States Food and Drug Administration recently approved the AngioVac aspiration system in 2009 for removal of unwanted intravascular material through venovenous extracorporeal bypass circuit (1,5). In this paper, we present a case of right atrial thrombus with procedural images of removal by the AngioVac system and a literature review of indications, applications, possible complications and limitation of this device.

A 54-year-old woman with past medical history of multiple comorbidities including antiphospholipid syndrome and lower limb deep vein thrombosis was admitted with increased dyspnea. Transthoracic echocardiography showed possible right atrial mass and transesophageal echocardiography (TEE) confirmed presence of the mass, which was predicted to be a thrombus 1.7 cm × 1.2 cm (Figure 1). The dyspnea is most likely multi-factorial, including obesity, pulmonary hypertension, and possible pneumonia as was evident on the chest X-rays. On the other hand, distal embolization from the right atrial mass could not be completely ruled out as a potential contributing factor to the dyspnea. 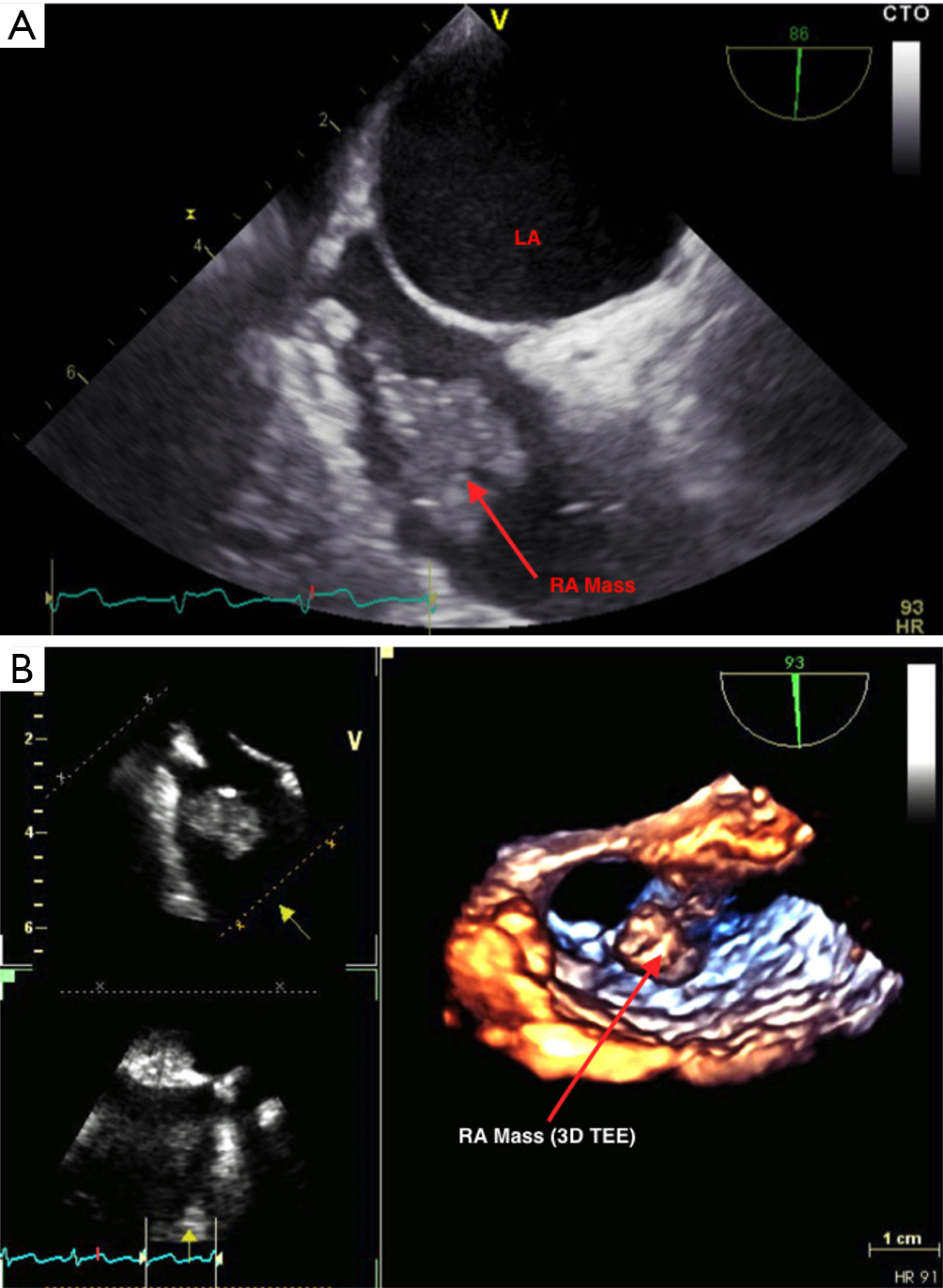 The patient was evaluated by a cardiothoracic surgery team who determined that the patient was at high surgical risk due to having multiple comorbidities, including morbid obesity (height: 1.68 m, weight: 130 kg, body mass index: 46 kg/m2), chronic kidney disease (creatinine baseline: 2.2, glomerular filtration rate: 20 s), recurrent thromboembolic disease, adrenal insufficiency, and hypothyroidism. The surgical risk was calculated using the Society of Thoracic Surgeons (STS) score with an estimated perioperative morbidity/mortality of 18.2%, short length of stay of 33.4%, and reoperation risk of 4.3%. After discussing treatment options with the patient, the decision was made to use the percutaneous AngioVac system to evacuate the mass to prevent potential risk of embolization.

After informed consent was obtained, the procedure was conducted under general anesthesia and endotracheal intubation. With ultrasound guidance, right and left internal jugular venous accesses were obtained. A soft 0.035-inch J-tipped guide wire was placed, via fluoroscopy, in the inferior vena cava (IVC) taking care not to disturb the right atrial mass.

Using fluoroscopy and TEE guidance, as well as progressive dilators, a 26 French Gore sheath was placed in the right internal jugular vein (suctioning cannula) and a 19 French cannula of the veno-venous bypass system was placed into the left internal jugular vein (re-infusion cannula). Then the suctioning catheter was advanced into the superior vena cava (SVC) (Figure 2). After priming the system and connecting tubings to the pump and filter, the venovenous bypass circuit was started.

Once appropriate flow was established at 3 L/min and under fluoroscopy guidance, the suctioning cannula was carefully advanced into close proximity of the mass (Figure 2B). TEE confirmed contact between the suctioning cannula and the mass, which was subsequently suctioned into the cannula (Figure 3A), then to the filter. TEE images showed complete removal of the mass (Figure 3B), which was eventually seen in the filter chamber (Figure 3C).

The excess blood in tubing was transferred back to the left internal jugular system. The extracorporeal pump system was turned off and the AngioVac catheters were then removed. Hemostasis was achieved after removing the sheaths one at a time. The patient tolerated the procedure well and was subsequently transferred to the coronary intensive care unit for close observation. She was later extubated and discharged home a few days after the procedure.

The presence of free-floating right heart thrombus is a predictor of hemodynamic decompensation, cardiac arrest and mortality even if it is treated with heparin (2). If these patients are poor candidates for conventional therapy of thrombolytics or surgical thromboembolectomy because of bleeding, failure of thrombolytics or hemodynamic instability, they may benefit from percutaneous mechanical thrombectomy by AngioVac, which is proved to be effective for complete evacuation in most patients (2).

We sought to present an assessment of utilizing the AngioVac device for its use with en bloc removal of a large clot burden to avoid bleeding risks associated with thrombolytics as well as hemolysis and other complications associated with rheolytic systems (4). It is a catheter-based system consisting of:

It can be introduced from either the internal jugular or the common femoral veins, allowing for versatility of approach for venous thrombus removal (5). It also has a design that avoids hemolysis-mediated complications seen with mechanical thrombolytic devices, which cannot be used longer than a limited number of minutes (5). It is inserted through 26 French sheath venous access under ultrasound and fluoroscopy guidance. Heparin based anticoagulation is needed during operation. Most of reported cases of AngioVac were under general anesthesia; however, Wunderlich et al. reported a case using local anesthesia and moderate sedation (6).

The effectiveness of AngioVac has been evaluated previously. In the largest AngioVac case series of 14 patients by Donaldson and colleagues, the thrombus was removed successfully in 73% of cases, and 87% of patients survived until the end of their hospitalization (2). Salsamendi and colleagues presented a case series of seven patients, all patients survived until the last follow-up visit (4). The AngioVac was effective in evacuation of thrombi at different sites, including iliocaval, IVC with renal vein extension, SVC, right atrium (RA), pulmonary arteries, Fontan circuit and Glenn shunt with pulmonary artery extension (4). It also has been used to treat iliocaval thrombosis, secondary congenital thrombophilias, and secondary to IVC filters which was resistant to thrombolytics which indicates that AngioVac could potentially treat chronic venous thrombosis (5). The patient in this report was not a surgical candidate; therefore, we utilized the AngioVac system allowing for her discharge post-thrombus removal. Our case adds to the previously reported cases in literature, illustrates the procedural steps via imaging and collaborates the success of utilizing AngioVac for thrombosis extraction.

Other reported uses of AngioVac include removal of migrated IVC filter to RA (8), prevention of IVC thrombus embolization during manipulation of IVC as in renal cell carcinoma resection (9) and removal of thrombus attached to patent foramen ovale closure device resistant to anticoagulation (6). Furthermore, AngioVac has been used for the complete extraction and/or partial debulking of infectious vegetation (up to >2 cm in size) on native and artificial valves and cardiac devices serving as a bridge therapy for surgery in critically ill patients who were high risk for surgical removal (6,7). Typically, patients with infectious vegetation have a risk of 34–55% for septic PE, which increases the concern for development of pulmonary abscess and refractory sepsis (7). Use of the AngioVac significantly reduces the incidence of septic PE at the time of lead removal and has allowed for open thoracotomy and lead removal to be used only on patients who have failed the non-surgical AngioVac method (7). With further device modifications, AngioVac can potentially become an alternative to surgical extraction of other intravascular and/or intracardiac masses including cardiac tumors (1).

Although the two largest case series did show that AngioVac was remarkably safe and without major complications, there are some limitations to be considered. Despite fewer patients requiring blood transfusions, the common complications were a drop in hematocrit and hematomas at the site of access. There was no incidence of myocardial infarctions, strokes or pulmonary hemorrhages (2,4). Other theoretical potential complications include dissection or perforation of venous system, arrhythmia, embolization of clot or tumor fragments with subsequent cardiorespiratory compromise, damage to intracardiac structures (namely the tricuspid valve and right atrial wall rupture), air embolism, clot formation on AngioVac catheters, catheter malposition and unexpected decannulation (6). Technical limitations include:

In conclusion, AgioVac aspiration device can be an effective and safe option for removal of undesirable intravenous masses to avoid surgery and/or when other traditional treatment options are considered unsuitable. The applications of this procedure are expanding with relatively low rates of complications. This approach can be the definitive treatment or a bridge to a more definitive therapy. Limitations to consider are mainly technical difficulties, cost and lack of experience at most of the centers. Studies are still needed to further evaluate the safety, effectiveness and utility of this treatment option, however, based on our experience with this case the use of AngioVac presents great potential for the future of cardiac mass removal.

Conflicts of Interest: All authors were involved in the treatment of the patient in this case at the University of Missouri Hospital, but have no relation to any manufacturer or distributor of AngioVac.