My art practice includes the disciplines of printmaking and clay sculpture.

The genesis for my current clay work of Labyrinth and Maze series derives from my interest in the tension of strength versus fragility and as I exaggerate the scale to push the work towards the edge of physical collapse, this theme becomes more potent. The work is hand built and sculptural in nature. Each Labyrinth is constructed in sections and secured on steel plinths in order to ascend to a scale 5-6 ft in height driving the work into a human-scale relationship (Figure 1). I reveal the seams of each section as a nuance of strength and allow the strategy of light movement through the many surface perforations, to evolve a perceived fragility (Figures 2,3). I am interested in the undulating form and movement of the clay and the light with a constant exploration and development of shaled and ledged formations as evidence of and metaphor for life’s layers. 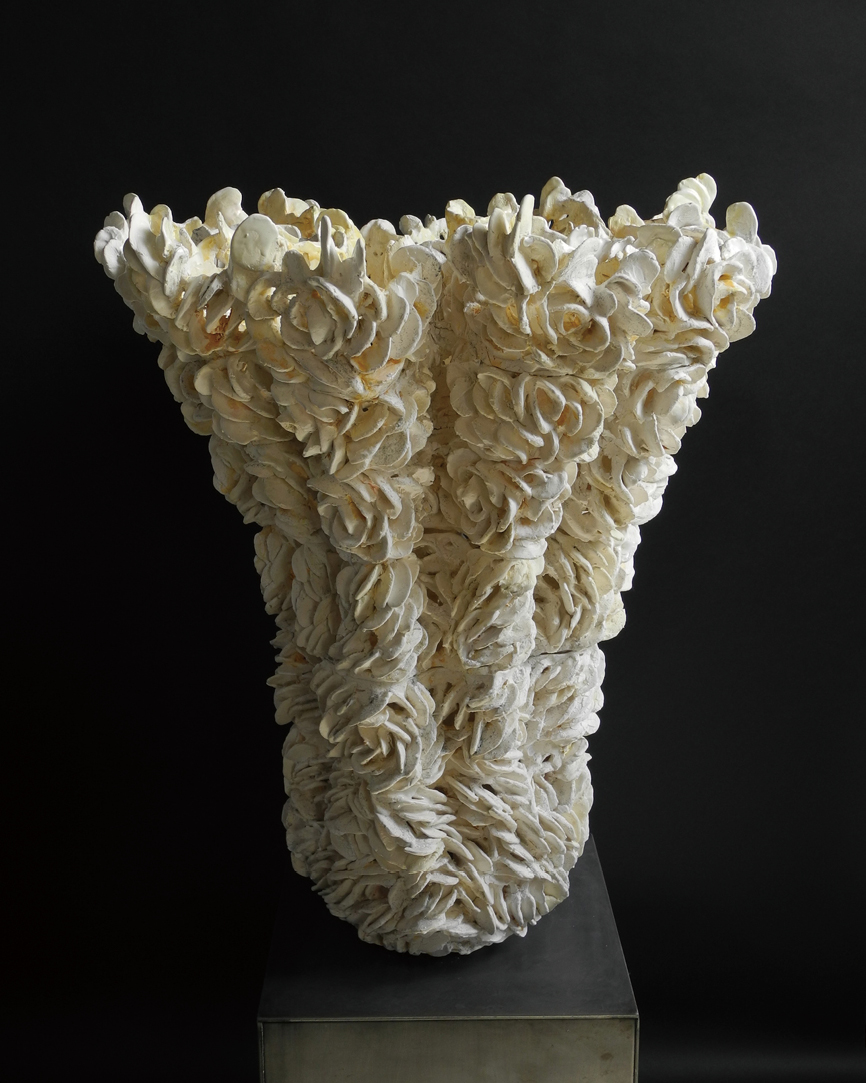 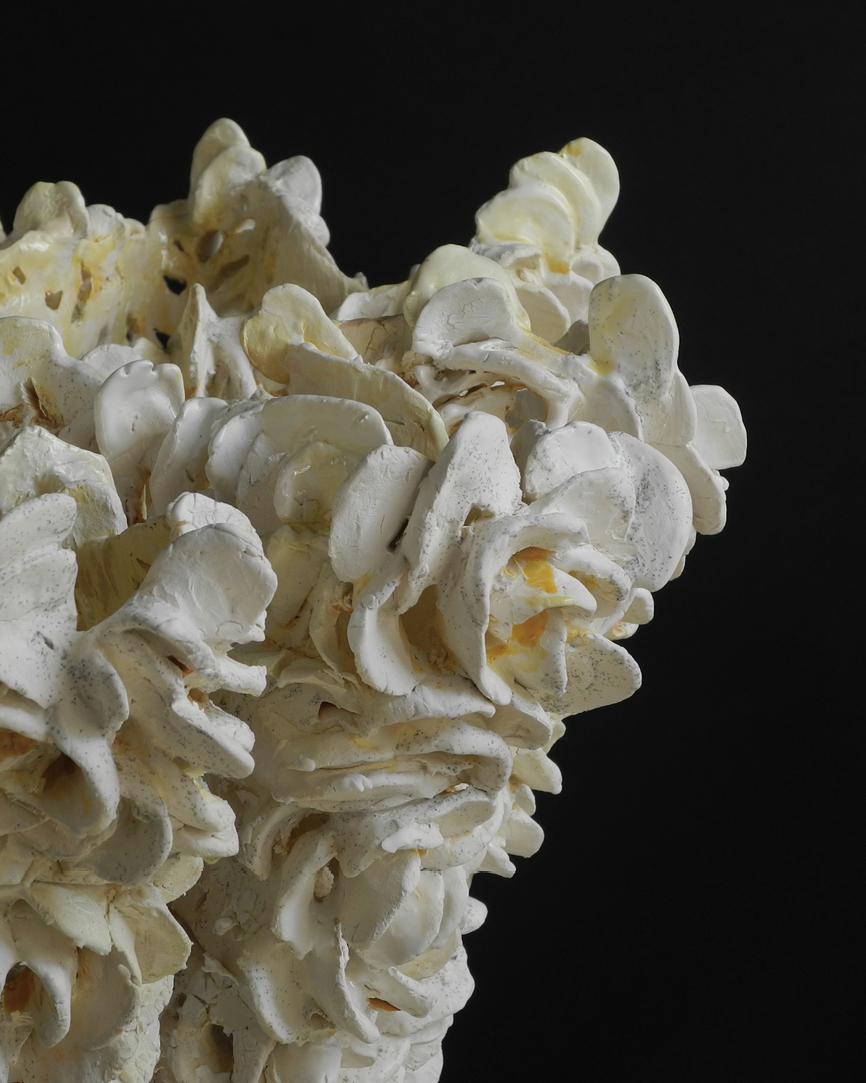 The recent evolution of the clay Maze series, smaller in scale, is an investigation into themes of chaos and beauty: the strength required for negotiating the paths between our interior and exterior worlds, a universal theme of appearances vs. reality, chaos vs. order, investigating the links between our interior private ordering and our presentation of its outward appearance (Figures 4,5). 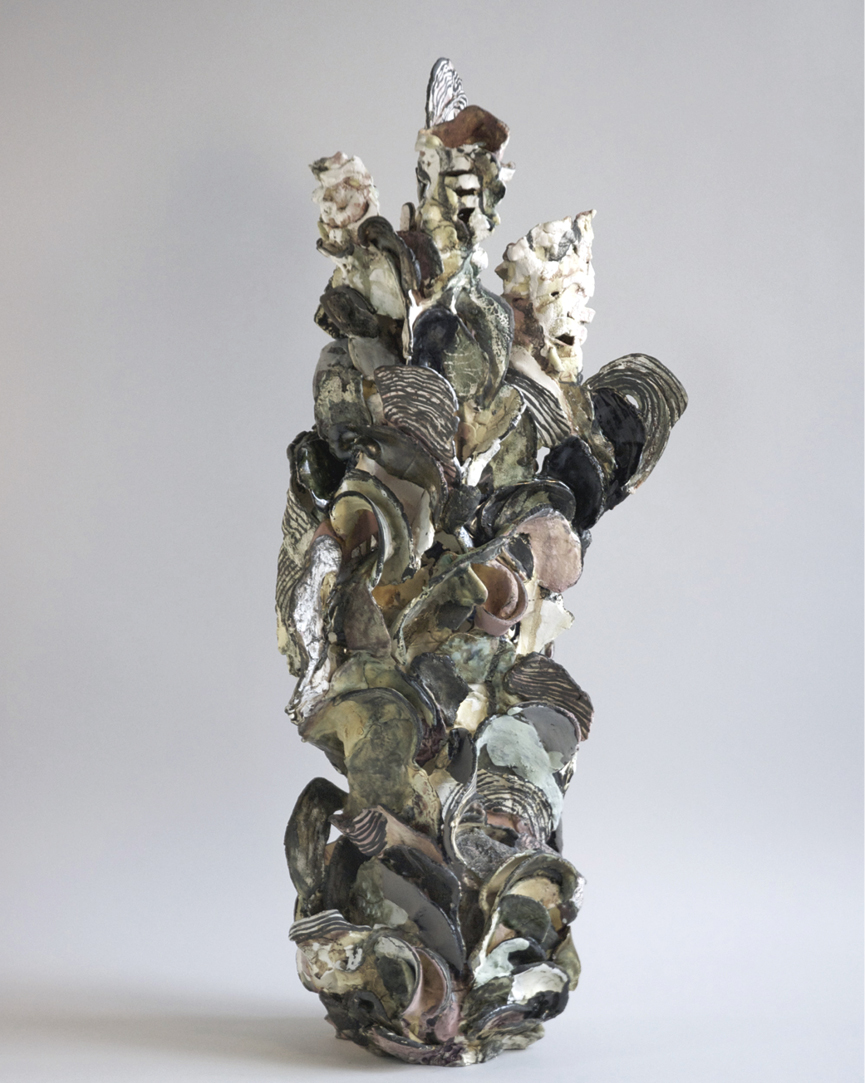 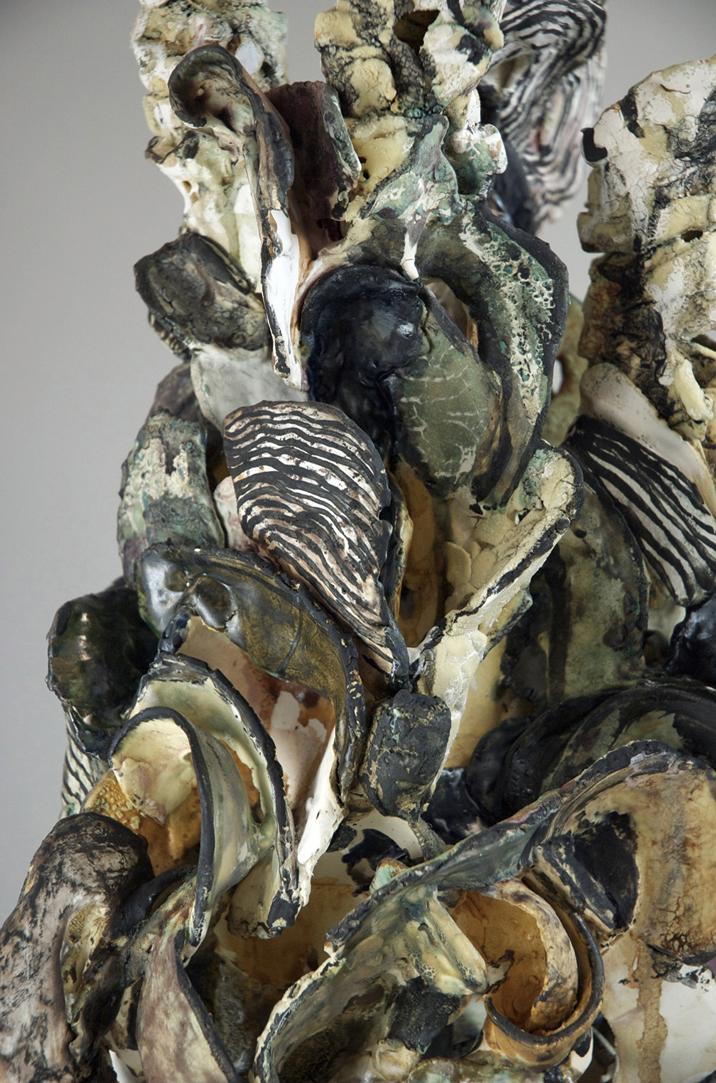 Where the Labyrinths attempt to contain in a vessel format, and then let go through the many organized channels and surface perforations, the Maze series leaves the vessel completely into a complex stacking of chaotic passageways.

The line of the clay becomes not only a lyrical structural element but as well a directional gesture of energy contributing to the sculpture with seeming fragility. The notion of movement in a fleeting moment, holding the duality of energy and stagnation together, highlighting the transitory nature of all things: yet held impossibly still. My interest lies here in investigating how the material can take part in the action of the idea.

Susan Collett is a graduate from the Cleveland Institute of Art, Ohio U.S.A. earning a BFA degree in Printmaking with a Minor in Ceramics. Since 1993 she has run a full-time studio art practice in downtown Toronto. Public and private gallery exhibitions and commission work sustain her full-time practice.

Large-scale clay sculpture and printmaking has become the focus of her work. The clay works are hand-built of earthenware paper clay and multi-fired to achieve a complex patina of surfaces. The monoprints are printed from plates made of stitched industrial grade roofing copper.

Her work was recently included in the Taiwan Biennale 2012, International Triennial of Silicate Arts, Kecskemet, Hungary 2011, Sevres Porcelain Museum, Paris, 2010, and an honourable mention at the CEBIKO International Ceramics Biennale in Korea 2009. She has exhibited at SOFA Chicago & New York, Palm Beach and the Toronto International Art Fair

In 2009, Collett was invited by the ceramic Association of Israel to conduct a Master workshop near the Dead Sea and various invitations to give presentations on her work at The Gardiner Museum of Ceramic Art, Toronto, Hangzhou Art & Design Academy, China and Concordia University in Montreal among others.

Collections include The Gardiner Museum of Ceramic Art, The Tom Thomson Memorial Art Gallery, The Canadian Clay & Glass Gallery, The Queen Elizabeth Hotel, Montreal, Ernst & Young, Toronto, Trump Tower Miami, and The Canadiana Collection of the Official Residencies of Ottawa, Rideau Hall where her sculpture was placed in the private office of the Governor General of Canada.

Collett exhibits at the Sandra Ainsley Gallery in Toronto, Galerie Elena Lee in Montreal and the The Christine Klassen Gallery in Calgary and The Oeno Gallery, Picton. She is currently working on a new body of print & clay works, selections to be included in 2012 group exhibitions at The New Mexico Museum of Art in Santa Fe, The Gardiner Museum of Ceramic Art, Toronto and The Taiwan Biennale.