A comparison of Cornell and Sokolow-Lyon electrocardiographic criteria for left ventricular hypertrophy in a military male population in Taiwan: the Cardiorespiratory fitness and HospItalization Events in armed Forces study

Left ventricular hypertrophy (LVH) measured by echocardiography or magnetic resonance imaging studies has been well regarded as a form of end-organ damage and an early sign of cardiac dysfunction in patients with hypertension or multiple metabolic abnormalities (1). Twelve-lead body surface electrocardiography (ECG) is a cost-effective tool, and several ECG voltage criteria for identifying LVH have been widely applied in clinical practice and for researches. Of these, both sex-independent Sokolow-Lyon and sex-specific Cornell voltage criteria are used most commonly (2,3). Moreover, the product of QRS duration and voltage based on the Sokolow-Lyon and Cornell criteria for detecting LVH has shown more accurately than the voltage criteria alone (4,5). Nevertheless, ECG-derived LVH has been associated with the occurrence of a wide range of cardiovascular disease (CVD) such as atrial fibrillation and stroke independent of echocardiographic LVH in the general population (6,7).

In contrast, professional military members have to take regular rigorous physical training including endurance and resistance exercise to maintain their outstanding fitness. Frequent exercise training and well physical fitness have been associated with lower risk of incident CVD and mortality in the general population (8,9). However, there were conflicting results with regard to the cardiovascular outcomes in those taking repetitive vigorous exercise (10,11). To our best knowledge, cardiac remodeling such as left ventricular muscle hypertrophy and chamber dilatation are commonly present in athletes (12). Whether these physiological cardiac adaptations to repetitive strenuous training on future CVD and mortality events remain unclear in armed forces. In addition, the prevalence of ECG-derived LVH in professional military male members in the East Asian and Jewish populations was estimated 15–20% (13,14), which was much lower than that of 45% in the elite White male athletes (15).

Although current guideline recommended that isolated ECG voltage criterion for LVH in athletes was considered as normal cardiac adaptations to exercise, evidence for the associations of each ECG criterion with LVH estimated by imaging studies was lacking in the military members, especially of the Asian male population. Therefore the aim of our study was to compare the Cornell criteria with the Sokolow-Lyon criteria for the echocardiographic LVH in a large military male cohort in Eastern Taiwan.

The Cardiorespiratory fitness and HospItalization Events in armed Forces (CHIEF) is a retrospective cohort consisting of 4,080 professional military members aged 18–50 years completing the annual health examination and undergoing any one of three exercise tests in eastern Taiwan during 2014. The study design has been described in detail previously (14). Of these, there were 620 subjects underwent cardiac examinations of ECG and echocardiography simultaneously for their promotions to senior rank and advanced training. Women (n=53) and those with hypertension (systolic blood pressure >140 mmHg, or diastolic blood pressure >90 mmHg, or receiving antihypertensive therapy) or ECG findings of bundle branch block (n=28) were excluded, leaving a sample of 539 male members for the final analyses.

All procedures of echocardiography (iE33; Philips Medical Systems, Andover, MA, USA) were carried out by a well-experienced technician (Yun-Shun Yu) using a 1–5 MHz transducer and the reports were reviewed by a cardiologist (Gen-Min Lin) at Hualien-Armed Forces General Hospital. All study subjects were prepared in supine and left lateral positions and examined using parasternal long-axis and short-axis views and in the apical four and two-chamber views. On the basis of the recommendations of the American Society of Echocardiography (16), quantification of left ventricular chamber dimension (diastolic diameter) and wall thickness (interventricular septal and posterior wall) were measured approximately at the mitral valve tips and at the onset of the QRS complex of end diastole in parasternal long axis view. M-mode and two-dimensional measurements of left ventricular mass (LVM) used the leading edge-to-leading-edge method. LVM was calculated based on the corrected American Society of Echocardiography formula by Devereux et al. (17).

Baseline characteristics of the CHIEF military male cohort were reported as mean ± standard deviation or percent for continuous and categorical variables respectively. Pearson’s correlation coefficient (r) was used to determine the degree of correlation between each ECG criterion and the two LVM indexes, and compared by the Fisher’s z test. Receiver-operating characteristics (ROC) curves were used to compare the performance of each ECG criterion for the echocardiographic LVH over a range of specificities. Pairwise comparisons of the four ECG criteria for LVH were performed using differences between the areas under the curves (AUC). The sensitivity and specificity of each ECG criterion-derived cut-off value for echocardiographic LVH were compared. In addition, we also calculated the sensitivities and corresponding cut-off values for each criterion at fixed specificity levels of 90%, 95%, and 100% (20). A two-tailed value of P<0.05 was considered significant. All analyses were performed using SAS version 9.4 (SAS Institute, Cary, NC, USA).

This study was approved by the Institutional Review Board of the Mennonite Christian Hospital (No. 16-05-008) in Hualien, Taiwan. Informed consent was not required by the Board because of a retrospective study.

The baseline demographic, anthropometric, ECG, and echocardiographic characteristics of the military male cohort were shown in Table 1 and Table 2 respectively. Ages in the study subjects were between 18 and 50 years and more than 95% of them were less than 40 years. The prevalence of echocardiographic LVH was 6.7% as LVM/BSA ≥116 g/m2 and 8.4% as LVM/height2.7 ≥49 g/m2.7 respectively. 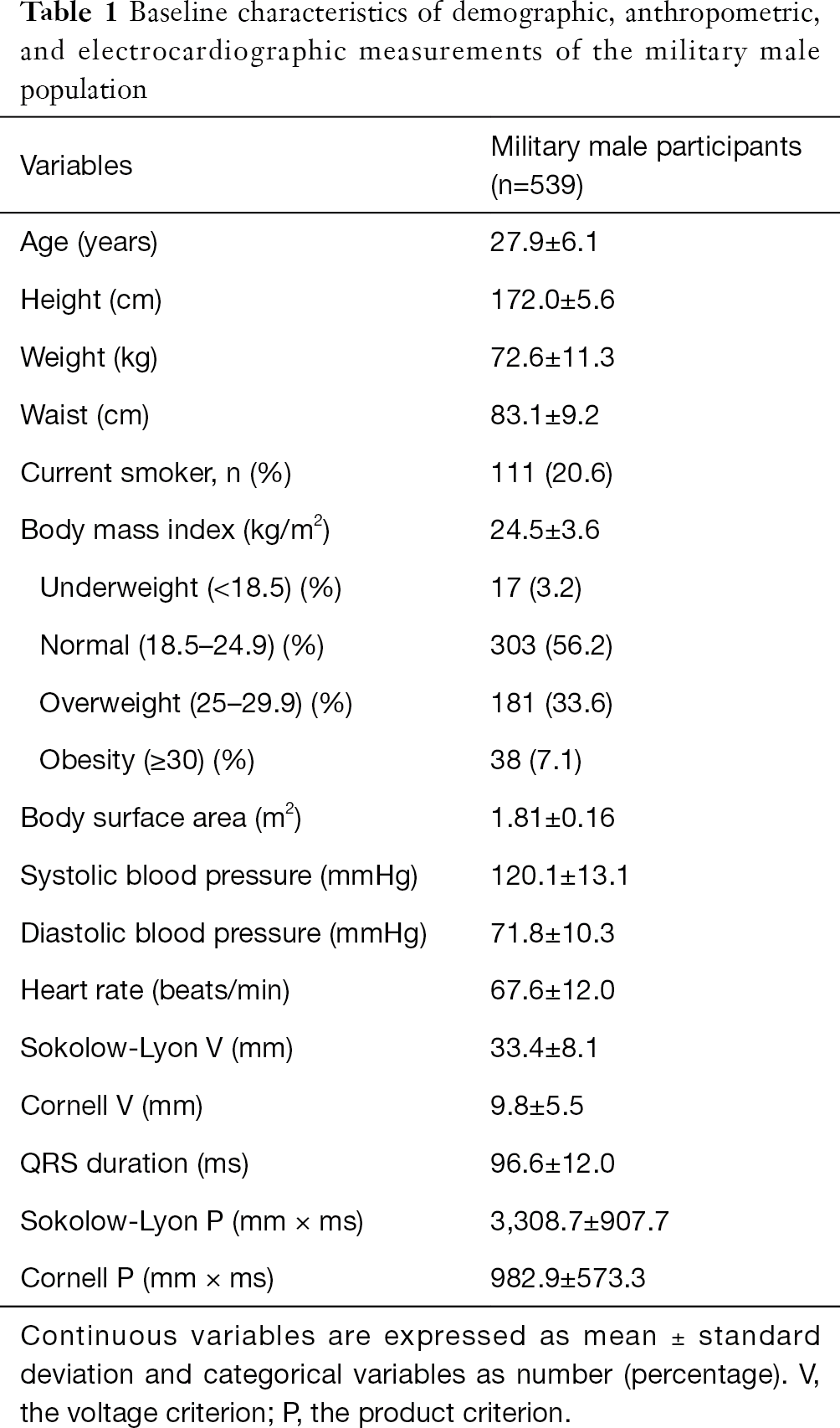 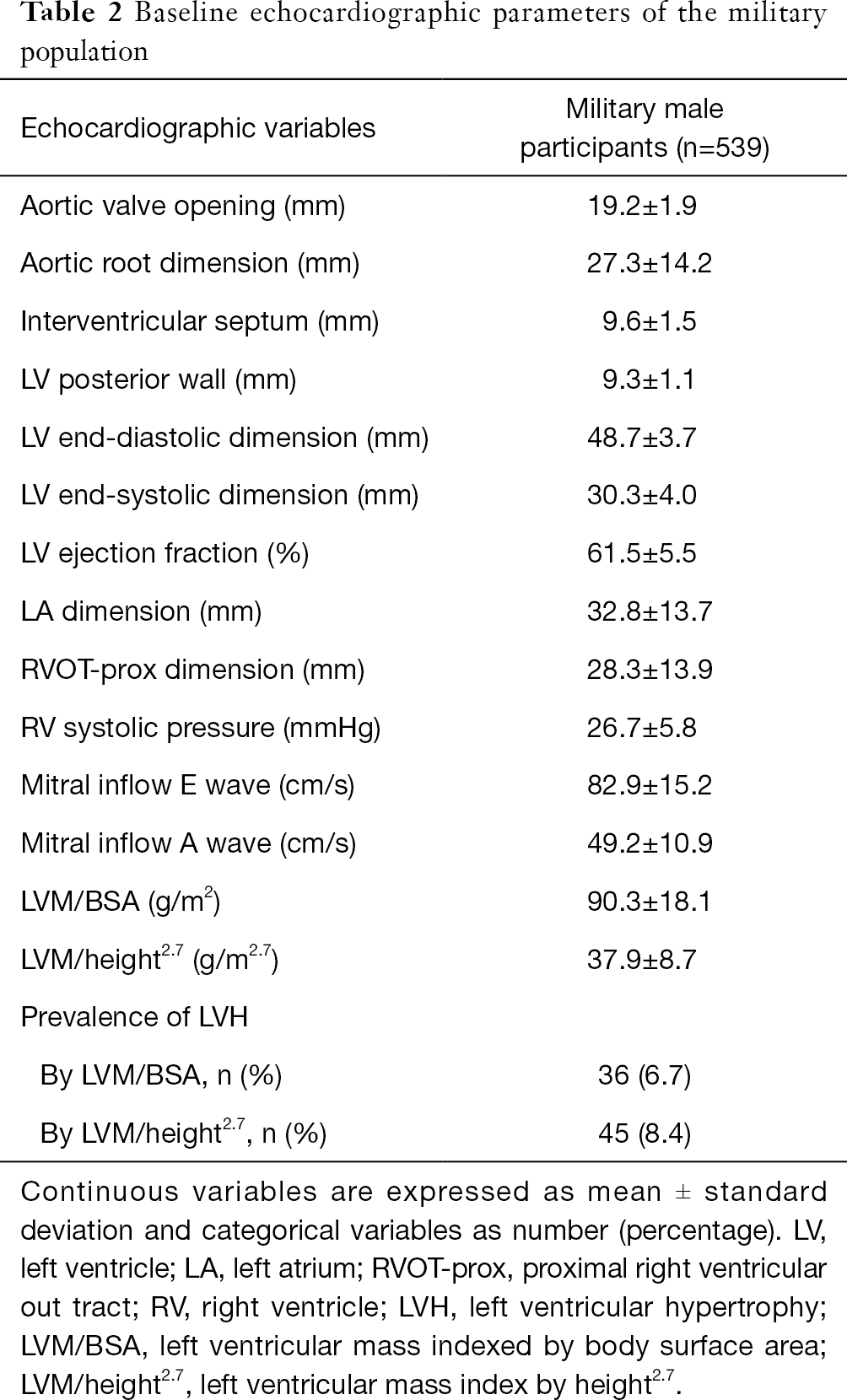 Correlation of each ECG criterion with the LVM indexes

Table 3 shows that all four ECG criteria were correlated with the LVM/BSA index (r=0.217−0.507). However, the Sokolow-Lyon voltage criterion was not correlated with the LVM/height2.7 index. The correlation coefficients of the Cornell criteria were higher than that of Sokolow-Lyon criteria, but this result was significant only for the LVM/height2.7 index. In addition, there were similar correlations between the ECG voltage and the product criterion with the LVM indexes. 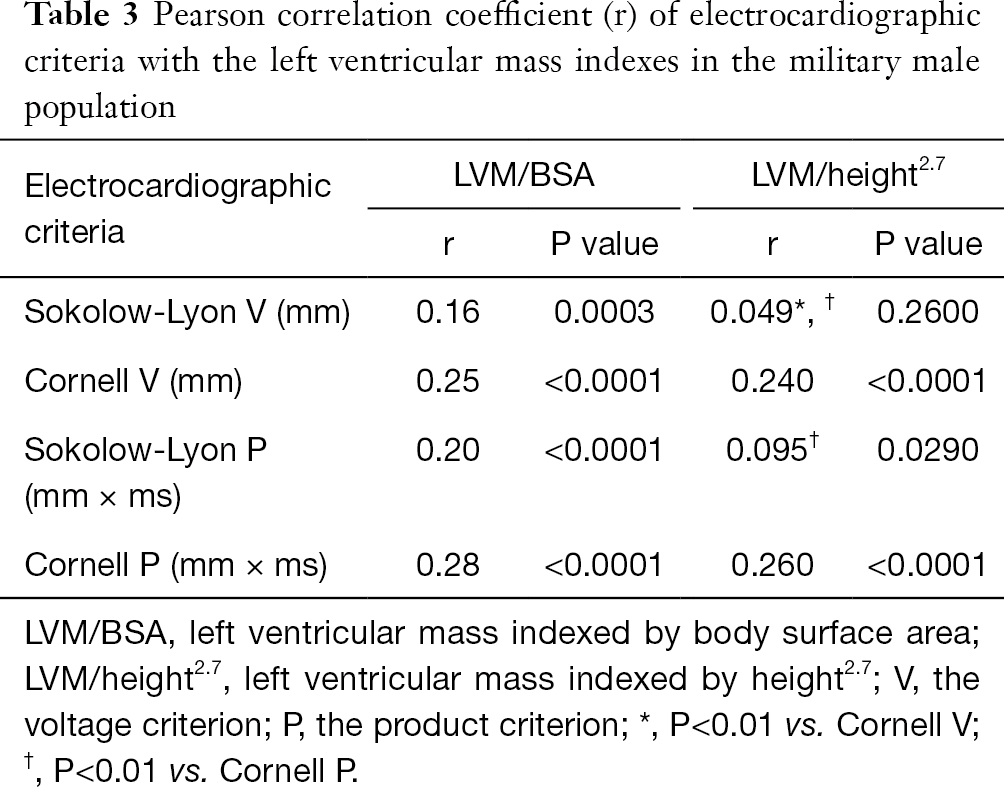 Figure 1A shows similar AUC (range, 0.61–0.66) among the four ECG criteria for the LVM/BSA ≥116 g/m2 except that the AUC of the Sokolow product criterion was modestly higher than that of the Sokolow voltage criterion (0.66 vs. 0.61). In contrast, Figure 1B shows that the Cornell voltage and product criteria had higher AUC (0.66 and 0.68 respectively) than those of Sokolow-Lyon criteria (0.54 and 0.53 respectively) for the LVM/height2.7 ≥49 g/m2.7. The differences between the Cornell and the Sokolow-Lyon criteria were almost significant except the difference in the voltage criteria. Table 4 shows that the sensitivities for the traditional cut-off values were generally low, especially using the Sokolow-Lyon voltage and product criteria for the LVM/BSA ≥116 g/m2 and LVM/height2.7 ≥49 g/m2.7 indexes of LVH (6.7–8.3% and 4.4–8.3% respectively). The test-negative likelihood ratio was estimated from 0.76 to 0.98 due to the low sensitivities of the four ECG criteria for the echocardiographic LVH.

Table 5 The sensitivities and revised cut-off values at specificity levels of 90%, 95%, and 100% for diagnosing echocardiographic LVH
Full table

Most previous studies investigating the performance of different ECG criteria for LVH evaluated by echocardiography or magnetic resonance imaging were conducted in hypertensive patients of the Western countries (21,22). Some studies have shown that there was ethnical difference between hypertensive Whites and African Americans in the ECG diagnostic performance (23,24). In summary, the Sokolow-Lyon voltage criterion had better sensitivity in African American patients, but in contrast the Cornell voltage criterion was superior in White patients. However, there were few studies for the association of ECG criteria with LVH in the Asian populations. In Chinese patients with hypertension (25), Xie et al. uncovered that the Cornell voltage and product criteria had better sensitivity to detect echocardiographic LVH than other criteria in men and women. In Korean patients, Park et al. demonstrated that the Cornell product criterion was superior in woman, but the Sokolow-Lyon product criterion had better sensitivity in men (20).

The Sokolow-Lyon voltage and product criteria had poor correlations with the LVM/height2.7 and the AUC of the ROC for the index in the present study. This finding was unexpected and not consistent with the Cornell ECG criteria. The reason could be explained in part by that unlike the Cornell criteria using frontal lead RaVL amplitude, the Sokolow-Lyon criteria used precordial leads amplitudes only and might be affected much if the LVM was indexed for height raising to an exponential power of 2.7. Therefore the application of the Sokolow-Lyon criteria for echocardiographic LVH should be cautious in the young fit male subjects for the LVM/height2.7 index.

There were several limitations in our study. First, the study population included only male subjects, making it difficult to apply the results to the female subjects. Second, the military members were considered to be a healthy cohort and the results could not be applied to the general populations who have multiple comorbidities. Third, we compared the Sokolow-Lyon with the Cornell-based criteria for echocardiographic LVH and the accuracy of other ECG criteria needs further investigation. Fourth, a small number of patients with hypertrophic cardiomyopathy might be included in the LVH group. Finally the present male cohort accounted for only 15% of the overall CHIEF male cohort, which might result in a selection bias despite that the baseline characteristics were similar to that of the overall CHIEF male cohort. In conclusion, the Cornell voltage and product criteria for echocardiographic LVH had better performance than the Sokolow-Lyon ECG criteria in a young military male cohort in Taiwan. In addition, the Sokolow-Lyon criteria should be cautiously used to correlate the index of LVM/height2.7 in this population.

Funding: The study was supported by the Research Grants from the Hualien-Armed Forces General Hospital (805-C105-10) and the Ministry of National Defense-Medical Affairs Bureau (MAB-106-124).

Ethical Statement: This study was approved by the Institutional Review Board of the Mennonite Christian Hospital (No. 16-05-008) in Hualien, Taiwan. Informed consent was not required by the Board because of a retrospective study.