A coronary pseudoaneurysm is a rupture of the arterial wall with to-and-fro blood flow into a cavity contained by pericardium (1).

Complications—such as thrombosis, compression of nearby structures, or rupture—have an adverse outcome (3). The main goal of therapy is to completely seal the pseudoaneurysm, thus reducing the risk of complications. Treatment options include anticoagulation (for the prevention of thrombosis), endovascular exclusion, or surgical repair.

The natural history of pseudoaneurysms is not clearly defined and is largely based on retrospective single-center case series as, to the best of our knowledge, no clinical trials have been performed to date.

A 72-year-old man with hypertension and diabetes was admitted to hospital for angina on exertion associated with shortness of breath. His medical history included CAD (PCI of three bare-metal stents into the right coronary artery and chronic total occlusion of the circumflex artery), atrial fibrillation (AF), and chronic kidney disease. An electrocardiogram registered a preexistent left bundle-branch block and the cardiac troponins were elevated [the highest value was 8.64 µg/L (upper limit of normal: 0.003 µg/L)]. Echocardiography showed a left ventricular ejection fraction of 30%, without valve abnormalities. The patient was referred to our catheterization laboratory 48 hours later and coronary angiography revealed a sub-thrombosis of the obtuse marginal branch, an ulcerated plaque with an ambiguous morphology of the LMCA, chronic total occlusion of the circumflex artery, and moderate multiple stenosis of the left anterior descending (LAD) coronary artery (Figure 1A,B). 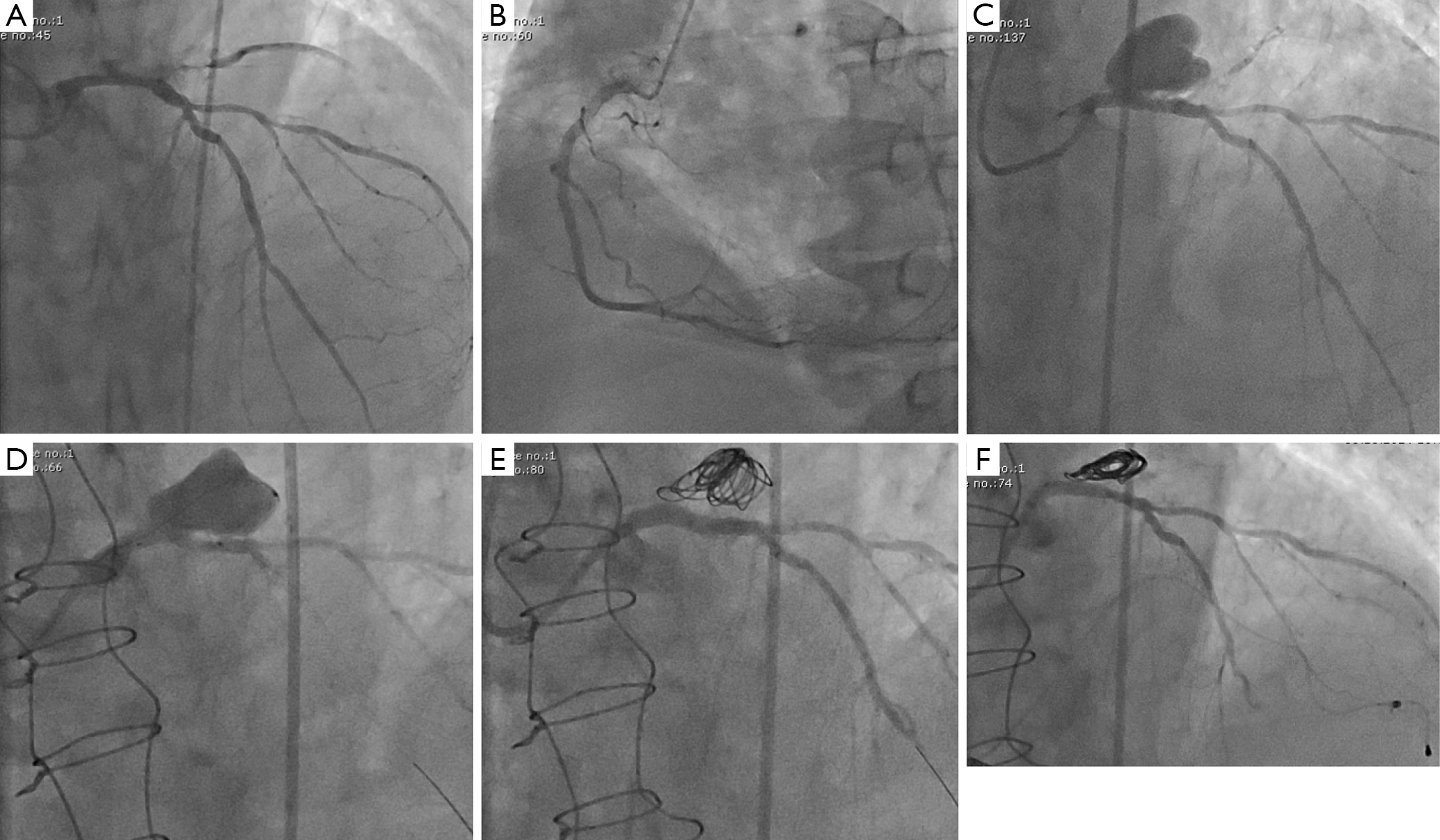 Figure 1 Coronary angiogram 48 hours after admission. (A) Ostial stenosis on the obtuse marginal with thrombolysis in myocardial infarction (TIMI) 1 coronary flow; the left main shaft had an ambiguous morphology, but no significant stenosis. The left anterior descending (LAD) coronary artery had only a moderate stenosis; (B) there was no in-stent restenosis on the right coronary artery and the circumflex artery was occluded with right collateral reinjection; (C) the coronary angiography performed at 1-month follow-up revealed the development of a large distal left main coronary artery (LMCA) pseudoaneurysm. The fractional flow reserve (FFR) value in the LAD coronary artery was 0.74; (D,E) percutaneous coronary intervention (PCI); (D) protecting the LAD coronary artery with a guide-wire, a 0.46 mm microcatheter was advanced into the aneurysm and a 4 mm × 20 mm compliant balloon was inflated in order to protect the downstream of the LAD; (E) the compliant balloon was inflated at 1,419 kPa and three INTERLOCK 2D coils (Boston Scientific, USA) (12 mm × 20 cm, 10 mm × 20 cm, and 14 mm × 20 cm) were released inside the aneurysm. A 4 mm × 15 mm PK Papyrus™ (Biotronik, Germany) covered stent was deployed into the LMCA; (F) completely sealed pseudoaneurysm at 6-month angiographic follow-up.

We presumed that the obtuse marginal was the culprit artery, but it was not possible to perform a PCI without compromising the LMCA, which did not have a signif-icant stenosis. Therefore, we decided to treat the patient medically—using aspirin, clopidogrel, warfarin, a beta-blocker, an angiotensin-converting enzyme inhibitor, and a statin—without performing revascularization. However, we proposed to assess the evolution of the LMCA ulcerated plaque and to measure the fractional flow reserve (FFR) across the LAD 4 weeks later.

At 1-month follow-up, a coronary angiogram revealed the development of a giant distal LMCA aneurysm (22 mm × 15 mm), including the origin of LAD (Figure 1C). Subsequently, the FFR value in the LAD was 0.74. The patient’s clinical status was stable without any signs of hemodynamic failure.

The case was discussed with the cardiothoracic surgeon at a multidisciplinary team meeting. The aneurysm was inaccessible to surgery and the possibility of PCI with a covered stent was considered. A high risk of thrombosis requiring long-term dual antiplatelet therapy (DAPT) in a patient already treated with oral anticoagulant (OAC) and the positive FFR value in the LAD prompted a hybrid approach. First, we performed coronary artery bypass graft surgery with a single graft to the LAD via conventional median sternotomy (as cardiac magnetic resonance imaging showed no myocardial viability in the circumflex artery territory). Five days later, we proceeded to endovascular exclusion of the pseudoaneurysm. We chose to associate coil embolization of the pseudoaneurysm with stenting of the LMCA using a covered stent (Figure 1D,E).

The patient was discharged in a stable condition on triple therapy comprising aspirin (75 mg/day), clopidogrel (75 mg/day), and warfarin (4 mg/day) for 1 month (his bleeding risk was high: HAS-BLED score of 4), followed by dual therapy with aspirin and OAC.

At 6-month angiographic follow-up, the aneurysm was completely sealed, there was no in-stent restenosis, the coronary graft was functional (Figure 1F), and the patient was free from symptoms. We used optical coherence tomography (OCT) imaging to confirm an optimal endothelialization of the covered stent (Figure 2A).

Figure 2 Optical coherence tomography (OCT) imaging. (A) OCT imaging revealing the successful endothelialization of the covered stent; (B) the cross-sectional image after OCT pullback showed a mean diameter close to 4 mm and an optimal length of 15 mm. The wide neck of the aneurysm was almost 7 mm in length; (C) good stent apposition confirmed by the OCT imaging control.

This case illustrates the rare complication of an LMCA ulcerated plaque becoming an asymptomatic giant pseudoaneurysm, with a high risk of rupture and sudden death. Available guidance proposes that patients with coronary aneurysms that involve the LMCA or are large (dilation that exceeds the reference vessel diameter by 4 times or >8 mm) should be referred for surgical revascularization (3). After the first coronary angiography, conservative treatment was chosen to avoid stenting a non-significant stenosis on the LMCA. In the setting of pseudoaneurysm, development 1 month later, its location and size were considered sufficient to suggest the need for closure. Since the first reported case in 1998 by Von Birgelen et al. (6), several documented procedures of successful percutaneous exclusion of coronary aneurysms using polytetrafluoroethylene-covered (PTFE) stents have been disclosed (7-10). Other authors have documented successful treatment of coronary aneurysms using coil embolization (11,12) when associated stenoses requiring PCI are frequently encountered (11). In the presence of a collateral branch connected to the main coronary artery affected by the aneurysm, it would be necessary to take into account a collateral in-flow, resulting in the persistence of permeability of the aneurysm (11).

In our case, the Heart Team facilitated the decision-making process. The surgical inaccessibility of the aneurysm, LAD stenosis with FFR <0.75, a calculated EuroSCORE of 7.49% and the thrombotic risk of a covered stent (13) led to a hybrid approach. Following surgery, the intervention on a protected LAD was realized without procedural complications. To accelerate the thrombosis process, we first released three InterlockTM 2D detachable coils (Boston Scientific, USA) inside the pseudoaneurysm and eventually the PK PapyrusTM covered stent system (Biotronik, Germany), usually designed to treat acute coronary artery perforations, demonstrated a good deliverability due to the single-layer stent design and its thin (90 µm), flexible membrane. Before stenting, using the cross-sectional image after OCT pullback, we accurately measured the exact dimensions into the left main stem: it showed a mean diameter close to 4 mm and an optimal length of 15 mm (Figure 2B). This combined technique was successful in excluding the pseudoaneurysm and maintaining patency of the left main. Although the final result was optimal, showing complete obliteration of the pseudoaneurysm and the OCT imaging control revealed a good stent apposition (Figure 2C), we planned an elective angiography after 6 months, at which time the stent was widely patent with some neo-intimal proliferation. The OCT imaging was once more a valuable tool in demonstrating successful endothelialization (Figure 2A).

A delayed LMCA pseudoaneurysm is a rare complication of unstable coronary lesions or secondary to catheter-derived coronary trauma. The main goal of therapy is to reduce the risk of expansion or rupture, considering surgical or percutaneous closure, although no randomized controlled trial exists to guide treatment decisions. Nevertheless, this specific case demonstrates that a pseudoaneurysm can be safely sealed using coil embolization followed by covered stent implantation. Infrequently, both surgery and PCI may be necessary to achieve a successful final result.