The first description of successful extra-corporeal membrane oxygenation (ECMO) was reported by Hill and colleagues in 1972 (1). ECMO was introduced to provide post-operative circulatory support for patients undergoing cardiac surgery. Technological advances and the H1N1 pandemic in 2009 opened the door for wider application of this lifesaving technique (2-4). Currently, it is an established treatment option for patients requiring temporary cardiopulmonary support (5-7). A circulatory bypass is established using large bore vascular cannulas to cycle the blood through an extracorporeal device which performs the physiological role of the heart and lungs. The extracorporeal device consists of a membrane oxygenator and a blood pump. The membrane oxygenator provides an efficient surface for gaseous exchange. The blood pump provides hemodynamic support. A low priming volume and low resistance to blood flow with a thrombosis-resistant coating minimize thrombotic events (8-10). The duration of support is typically 1–3 weeks (11). Patients are maintained on systemic anticoagulation while on ECMO. Vascular complications, both bleeding and thrombosis remain the leading causes of morbidity and mortality in patients treated with ECMO (12,13). This review will focus on the management of vascular complications of ECMO. 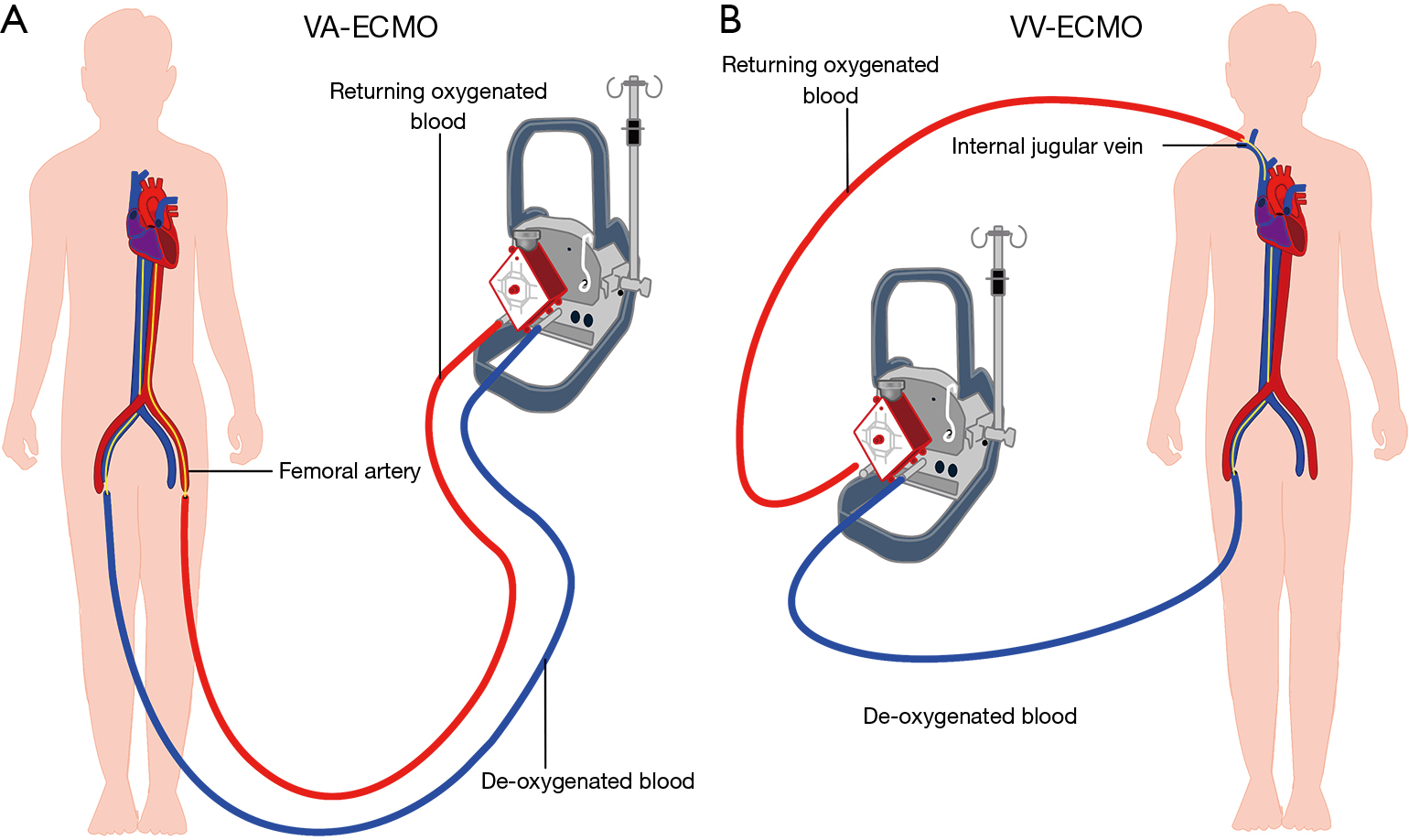 Classical indication for VA ECMO includes any potentially reversible cardiogenic shock as a bridge to recovery. Post cardiac surgery, graft failure after cardiac transplant, decompensated cardiomyopathy, myocarditis, acute coronary syndrome and drug induced cardiac decompensation are conditions where a bridge to recovery using VA ECMO is utilized. VA ECMO is also utilized as a bridge to decision making when the suitability or need for long term support is unclear (15). In other situations such as massive pulmonary embolism and pre-cardiac transplant status, VA ECMO serves the role of a bridge to destination treatment (16,17). The extracorporeal right to left shunt unloads the failing heart by reducing the preload while providing a stable blood flow to sustain end organ perfusion.

There are two main cannulation strategies for patients requiring VA ECMO: central and peripheral cannulation. Central cannulation is created in the operating room. The cannulas are larger and provide better flows than the peripheral VA ECMO. The outflow cannula is placed in the right atrium and the inflow cannula is placed in the proximal ascending aorta. Central VA ECMO provides better oxygenation for the coronary arteries and arch vessels due to the antegrade flow configuration compared to peripheral VA ECMO (18). Neurological complications due to perfusion abnormalities are lower with central VA ECMO. The vascular complications associated with central VA ECMO are related to cannula dislodgement and mediastinal hematoma which are managed surgically. Risk of infection is higher with central VA ECMO. Peripheral VA ECMO cannulation is most commonly performed in an angiography suite. In emergent situations, cannulation may need to be performed in less controlled environments such as the emergency room, intensive care unit and even at bedside. Cannulation of the vessels is performed using ultrasound guided percutaneous access or following a surgical cut-down. The most commonly used vessels are the common femoral artery (CFA) and the common femoral vein. The size of the arterial cannula varies from 16 to 21 French. The size of the venous cannula varies from 20 to 24 French. A distal limb perfusion line is required to prevent limb ischemia (19,20) (Figure 2). Perfusion abnormalities resulting from retrograde flow of oxygenated blood from the femoral artery creates a watershed phenomenon (16,21) compromising oxygenation of the aortic arch branches and coronary arteries. Monitoring the upper body perfusion using a radial access is mandatory during peripheral VA ECMO (22). Utilization of the subclavian artery and internal jugular vein for peripheral VA ECMO reduces the risk of upper body perfusion abnormality. Cannulation of the subclavian artery requires surgical cut down and has not been widely adopted (23). 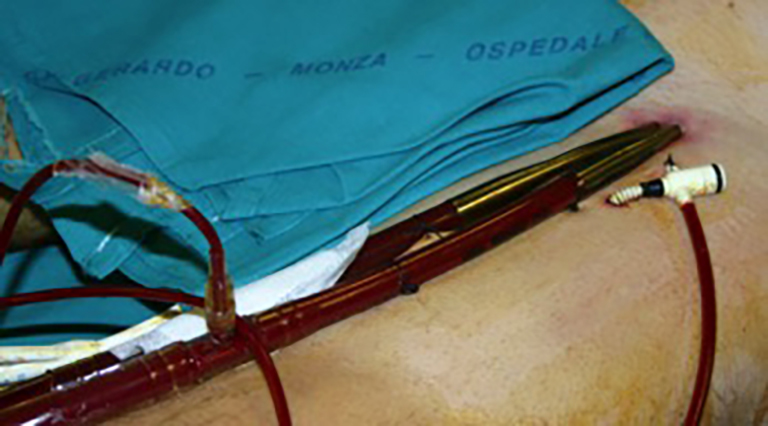 Indications for VV ECMO include adult respiratory distress syndrome, pneumonia, trauma and post-lung transplantation as a bridge to recovery (24). The extracorporeal life support organization (ELSO) recommends initiation of VV ECMO in patients with Horowitz index of less than 80 (22). VV ECMO is achieved by peripheral cannulation of the femoral vein as outflow and jugular vein as inflow (Figure 1). Recently, the use of VV ECMO in non-intubated patients “Awake ECMO” has gained attention in patients awaiting lung transplants as a viable bridge to transplantation strategy (25). The introduction of a single upper body venous access using the bicaval dual lumen catheter reduces the risk of bleeding and enables mobility (26). Correct positioning of the cannula is essential for avoiding recirculation (27) (Figure 3). 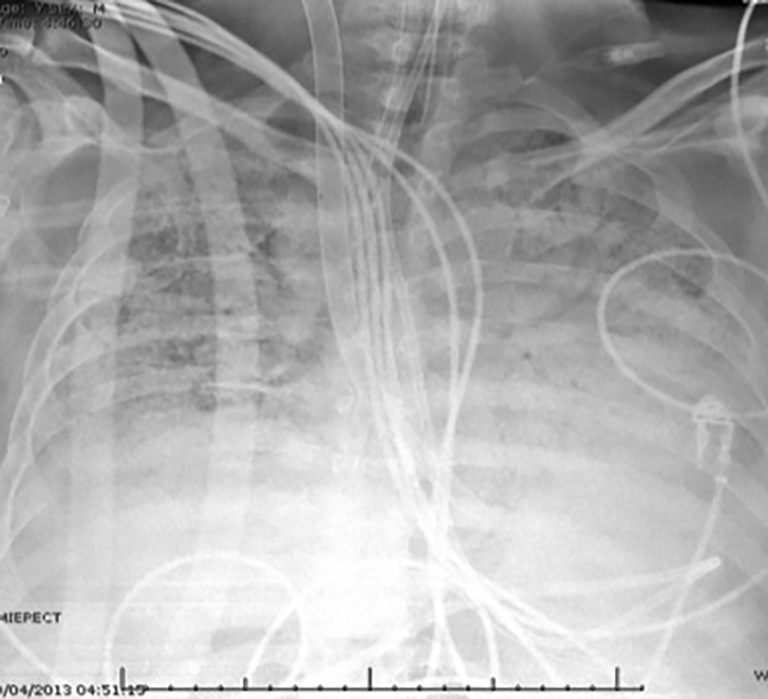 The combination of femoral arterial cannulation with large bore cannulas and the hemodynamic instability during peripheral VA ECMO places the limb at risk for thromboembolic complications. The risks are greater with larger cannulas (>20 Fr), in women, in young patients, and in the presence of peripheral arterial disease (19,20). The CFA is smaller in women. The CFA increases in size with age and thus younger patients are at greater risk for ischemic injury (30). The presence of peripheral vascular disease further compromises the blood flow to the lower extremity resulting in higher incidence of thromboembolic occlusion. Difficult bedside cannulation has also been identified as an additional risk factor (33). Clinical presentation varies in severity from pain, pallor, poikilothermia, motor or sensory deficit to gangrene. Doppler ultrasound and near infra-red spectroscopy (NIRS) are non-invasive tools to evaluate for vascular insufficiency. Baseline NIRS (SpO2) of greater than 40 and a distal perfusion pressure of 50 mmHg is required to prevent limb ischemia (34,35). Placement of a distal perfusion catheter (DPC) has shown to provide the required limb perfusion and reduce the incidence of limb ischemia (30,32,33) (Figure 2).

A 4 or 5 French antegrade DPC placed in the proximal superficial femoral artery with ultrasound guidance and attached to the side port of the arterial cannula provides limb perfusion. Part of the returning arterial blood from the cannula is directed to the DPC. Systemic anticoagulation also helps prevent limb ischemia. The ideal time to place a DPC is at the time of initial placement of the ECMO cannula in the CFA (19,20). Placement of a distal venous drainage catheter attached to the side port of the venous cannula has also been described to enhance the venous drainage and prevent venous thrombosis and venous ischemia (36,37). Monitoring with NIRS/Doppler ultrasound allows detection of ischemia early to institute corrective measures. Reperfusion compartment syndrome clinically presents with tense calf, pain, paresthesia, paralysis should prompt early decompression with fasciotomies. In patients requiring fasciotomies, adjustment to anticoagulation to prevent bleeding complications may be required.

Vascular injury can lead to dissection, pseudoaneurysm and retroperitoneal bleeding. Injury usually occurs during initial placement or at time or removal of arterial cannulas. These complications occur in 7–14% of patients (38) and are compounded by coagulative abnormalities. Pseudoaneurysm presents with a painful pulsatile swelling at the access site and is confirmed with Doppler ultrasound. Pseudoaneurysms with a narrow neck can be managed with ultrasound guided thrombin injection. Large pseudoaneurysms and those with a wider neck or those associated with an arteriovenous communication require surgical intervention. Most of the arterial dissections are asymptomatic. When arterial occlusion results from dissection, differentiation from thromboembolic occlusion is imperative. Management of symptomatic dissection includes placement of a stent and relocating the arterial cannula to a different site. Due to the systemic anticoagulation, these patients are prone to develop large internal hematoma with minor vascular injuries (Figure 4). Such vascular injuries can be suspected with hemodynamic changes or decrease in hematocrit and can be confirmed on cross sectional imaging. The patients are managed with correction of anticoagulation and transfusion. Endovascular embolization is required if conservative measures do not work. Rarely open surgical management is warranted. 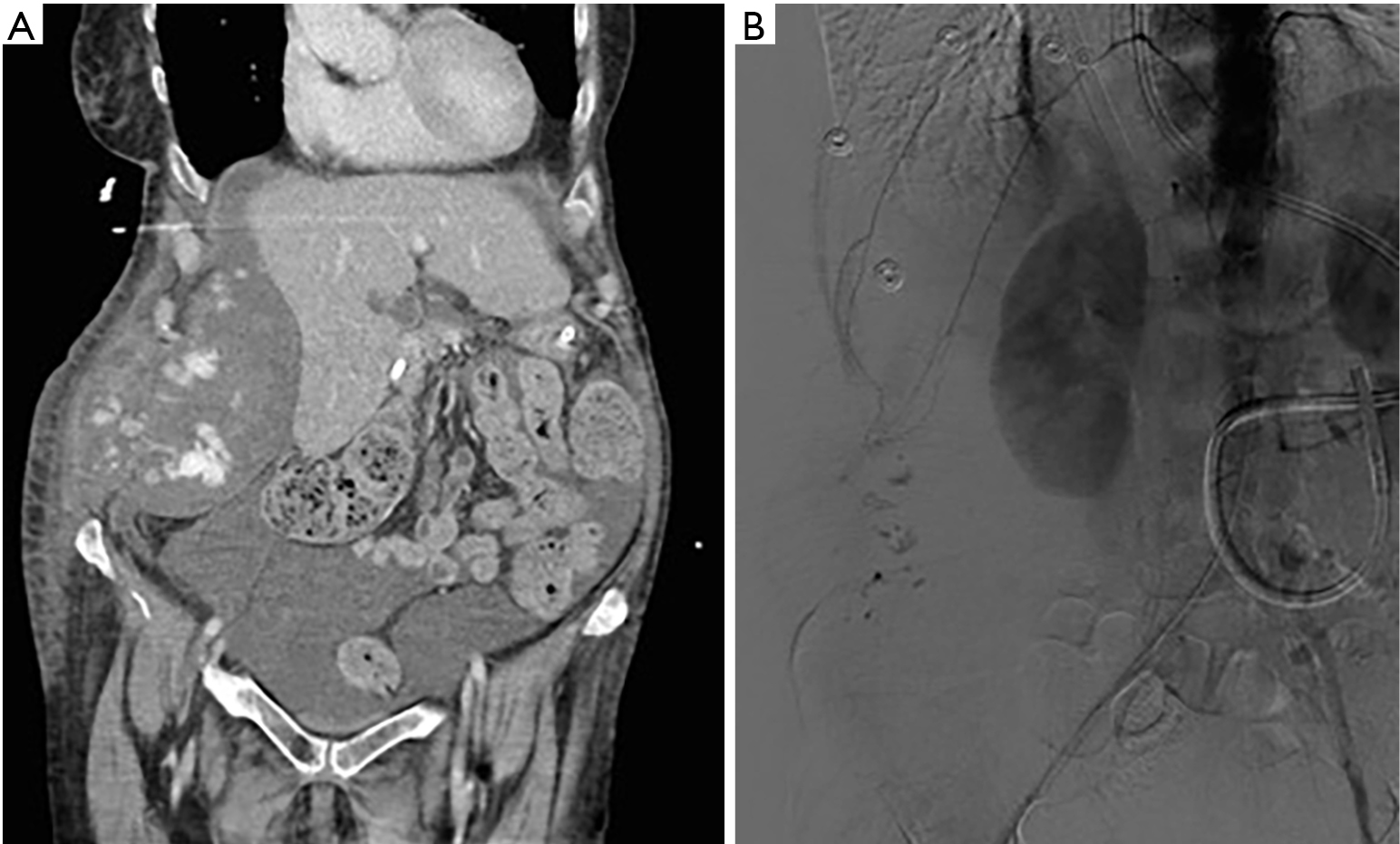 Figure 4 A 47-year-old female with COPD underwent initiation of VV ECMO using a single cannula from the right internal jugular vein for acute respiratory failure while awaiting lung transplant presents with abdominal pain and drop in hematocrit. An unusual abdominal wall hematoma with active extravasation was discovered on CT (A). Bleeding in these patients may be unpredictable due to their anticoagulation and platelet dysfunction. Angiography (B) shows active extravasation from D-11 and D-12 intercostal arteries. Both arteries were selectively cannulated and successfully embolized with gel foam (not shown). COPD, chronic obstructive pulmonary disease; VV ECMO, veno-venous extra-corporeal membrane oxygenation.

Infection rates at groin cannulation site have been reported from 7% to 20% (19,20,32). Malnourishment and obesity increase the risk of groin infection. Cellulitis, drainage around the cannula, induration indicate superficial infection. Systemic signs including fever, hypotension, leukocytosis and bacteremia portend development of systemic sepsis. Strict aseptic technique during placement of the cannula and subsequent handling are very critical to prevent infections. Once an infection is detected, antibiotic treatment and need for surgical intervention should be determined and initiated.

The utilization of ECMO for critically ill patients with cardiac and/or respiratory failure is increasing. Although these procedures can be lifesaving, vascular complications play a major role in successful outcomes. Understanding the different types of ECMO circulation and associated potential vascular complications as outlined in this review is vital for successful management of these patients.