The primary pulmonary circulation comprising of the pulmonary arterial tree, extensive capillary bed and pulmonary venous tree, connected in series is a low pressure, high capacitance system which provides large surface area for gas exchange. The bronchial circulation which provides nutrients to the lungs is a low capacitance, high pressure system and normally does not participate in blood oxygenation. 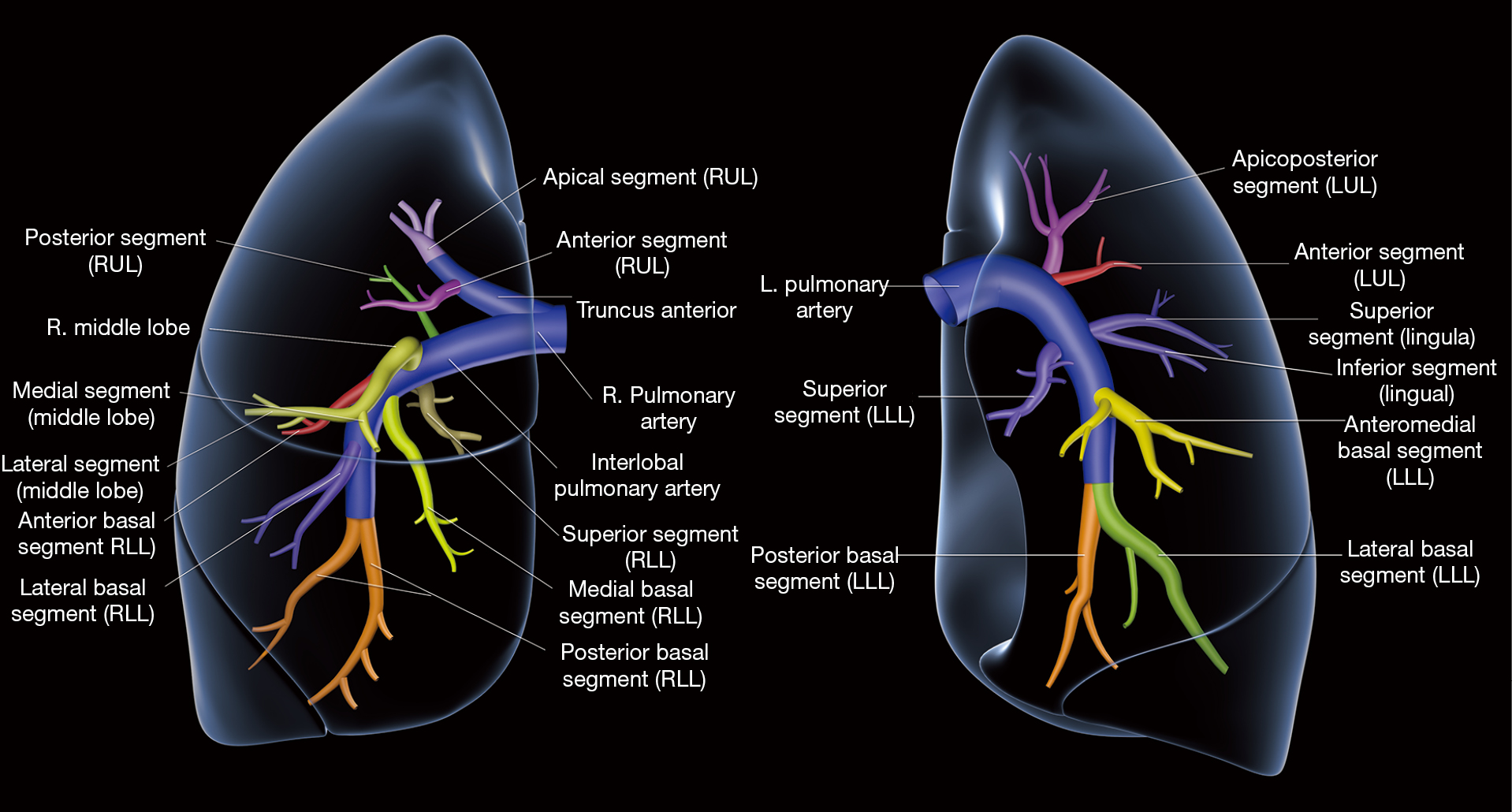 The right pulmonary artery is within the pericardium for more than three-fourths of its length and runs horizontally to the right behind the ascending aorta and superior vena cava. As it leaves the pericardium, it lies anterior and inferior to the right main stem bronchus. After the origin of its first branch, the truncus anterior, the interlobar pulmonary artery runs inferiorly between the bronchus intermedius posteriorly and the superior pulmonary vein anteriorly. It turns posteriorly behind the origin of the middle lobe bronchus, continues as the common basal trunk and terminates in branches to the basal segments. The truncus anterior supplies the right upper lobe; and the interlobar artery, which runs in the interlobar fissure, supplies the right middle and right lower lobes.

The middle lobe segmental arteries arise from the anteromedial aspect of the right interlobar artery as it courses anterior to the bronchus intermedius. There may be separate or common origin of the arteries to the medial and lateral segments of the middle lobe.

Typically, the superior segment of the right lower lobe receives one segmental artery, arising posteriorly from the interlobar artery, following which the common basal trunk divides into 2 terminal branches which subsequently divide to supply the medial basal, posterior basal, lateral basal and anterior basal segments. In up to 70% of cases, the second branch of right lower lobar artery is the medial basal branch. Occasionally there may be 2 separate branches to the apical segment.

The left pulmonary artery passes inferiorly and posteriorly and exits the pericardium below the aortic arch at the ligamentum arteriosum. It arches over and behind the left mainstem bronchus and curves around three-fourths of the circumference of the left upper lobe bronchus. The left main pulmonary artery has a long extra pericardial length before giving off its first branch. It continues as the common basal trunk and terminates in branches to the basal segments.

In most cases, there is a single superior segmental artery after which the pulmonary artery is referred to as “basal part”. It then divides into two terminal divisions which branch into segmental and subsegmental branches supplying the antero-medial, posterior and lateral basal segments.

The pulmonary arterial tree subdivides rapidly and branches into pulmonary capillaries, which form a dense web in the alveolar wall, increasing the maximum surface area available for gas-exchange. In addition to pulmonary arterial branches running alongside a bronchus there are “supernumerary” arteries which leave the axial branches at irregular but frequent intervals to enter the lung parenchyma, resulting in the pulmonary arterial tree having many more branches than the bronchial tree (5,6). Due to thin walls and smaller amount of smooth muscle, the pulmonary capillaries are more distensible and compressible than systemic vessels and offer much less resistance to blood flow. Following gas exchange in the capillary beds oxygenated blood is returned to the heart by pulmonary veins. 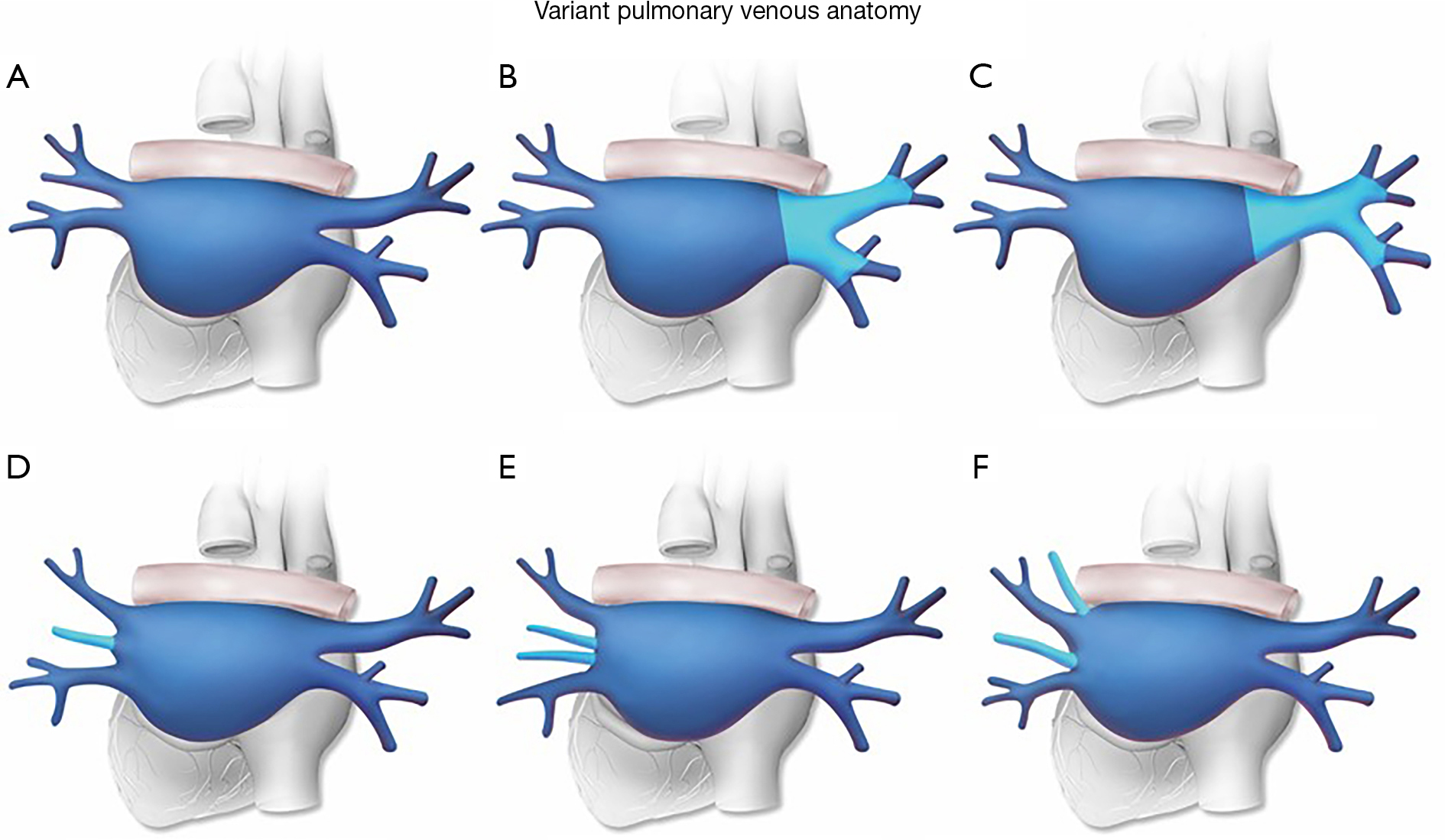 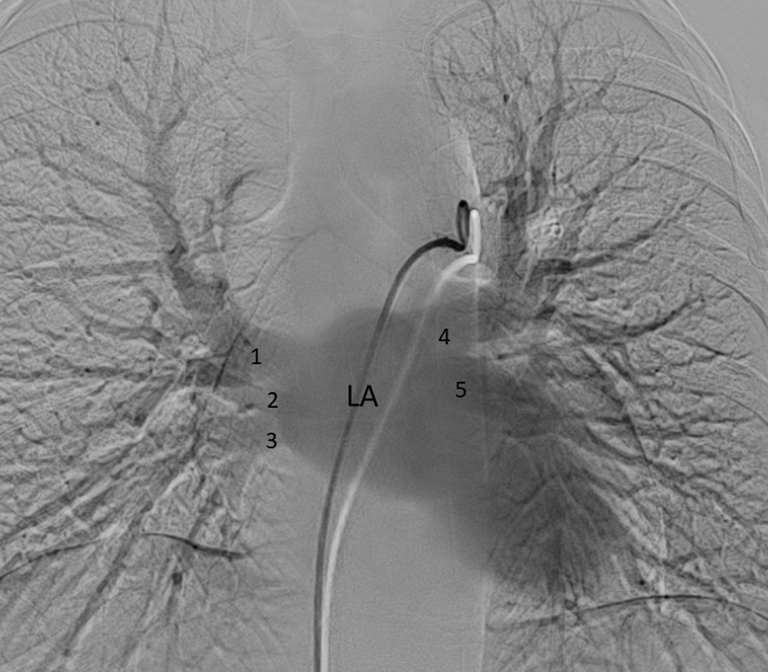 Most commonly, there are 3 bronchial arteries, 2 on the left side and 1 on the right side arising from the anterolateral aspect of the descending aorta or from intercostal arteries located within 2 to 3 cm distal to the left subclavian artery. They form a rich anastomotic network with the pulmonary arterial circulation at the level of the lobar or segmental bronchi. A substantial portion of bronchial venous blood enters the pulmonary veins (1).

CT pulmonary angiography (CTPA) is recommended by the American College of Radiology (8) for the evaluation of patients with suspected pulmonary embolism due its high sensitivity and specificity, easy accessibility after hours, and its ability to offer alternative diagnoses.

Pulmonary arteries typically follow their respective segmental and sub segmental bronchi and it is important to identify branches to the 10 right and 8 left bronchopulmonary segments, looking for variations in anatomy, particularly in the upper lobes. Keep in mind that the branches to the middle lobe and lingula arise from the anterior aspect of the interlobar artery whereas the branch to the superior segment of the lower lobes arises from the posterior aspect of the interlobar artery. Figures 5,6 demonstrate pulmonary arterial anatomy on cross-sectional imaging. 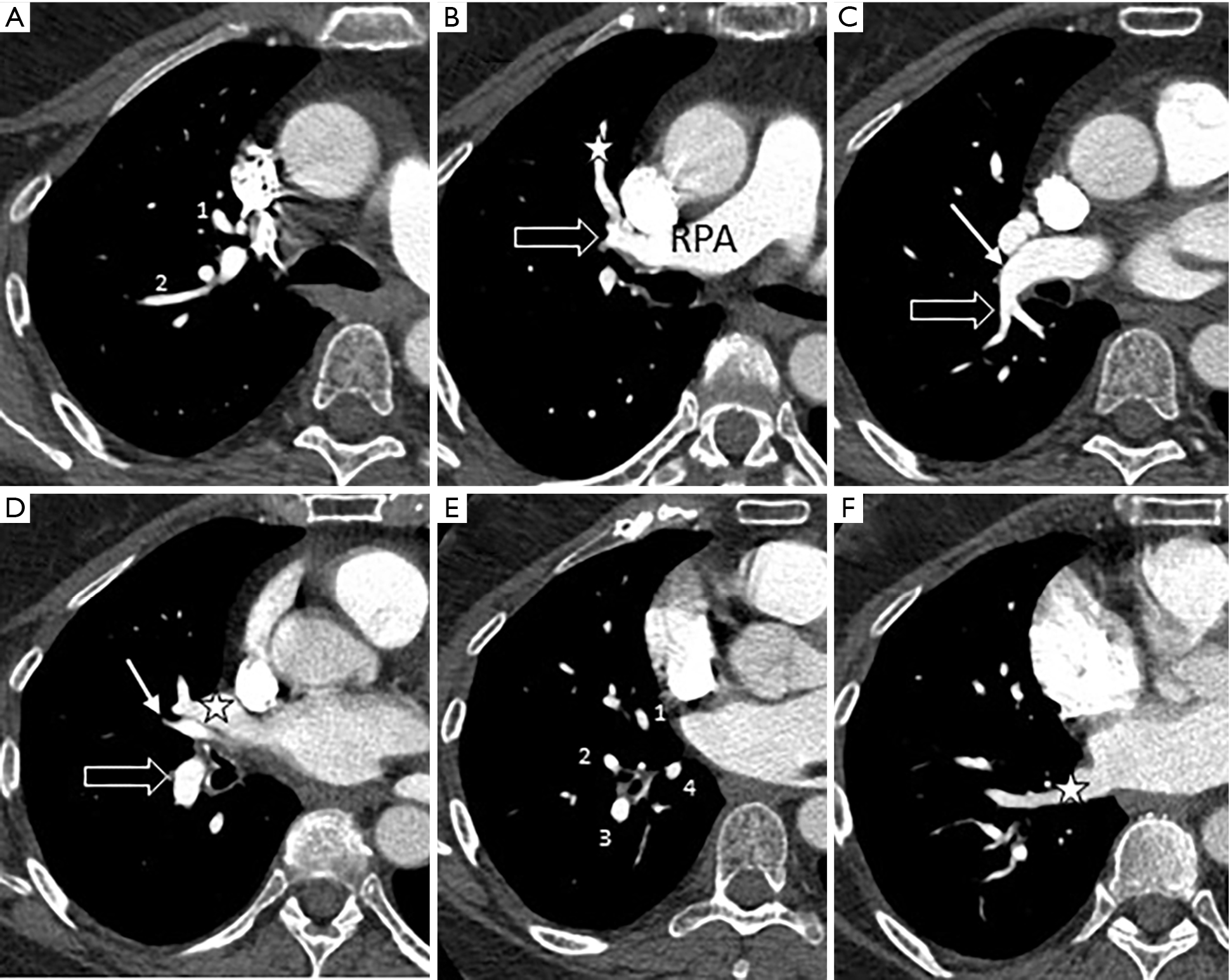 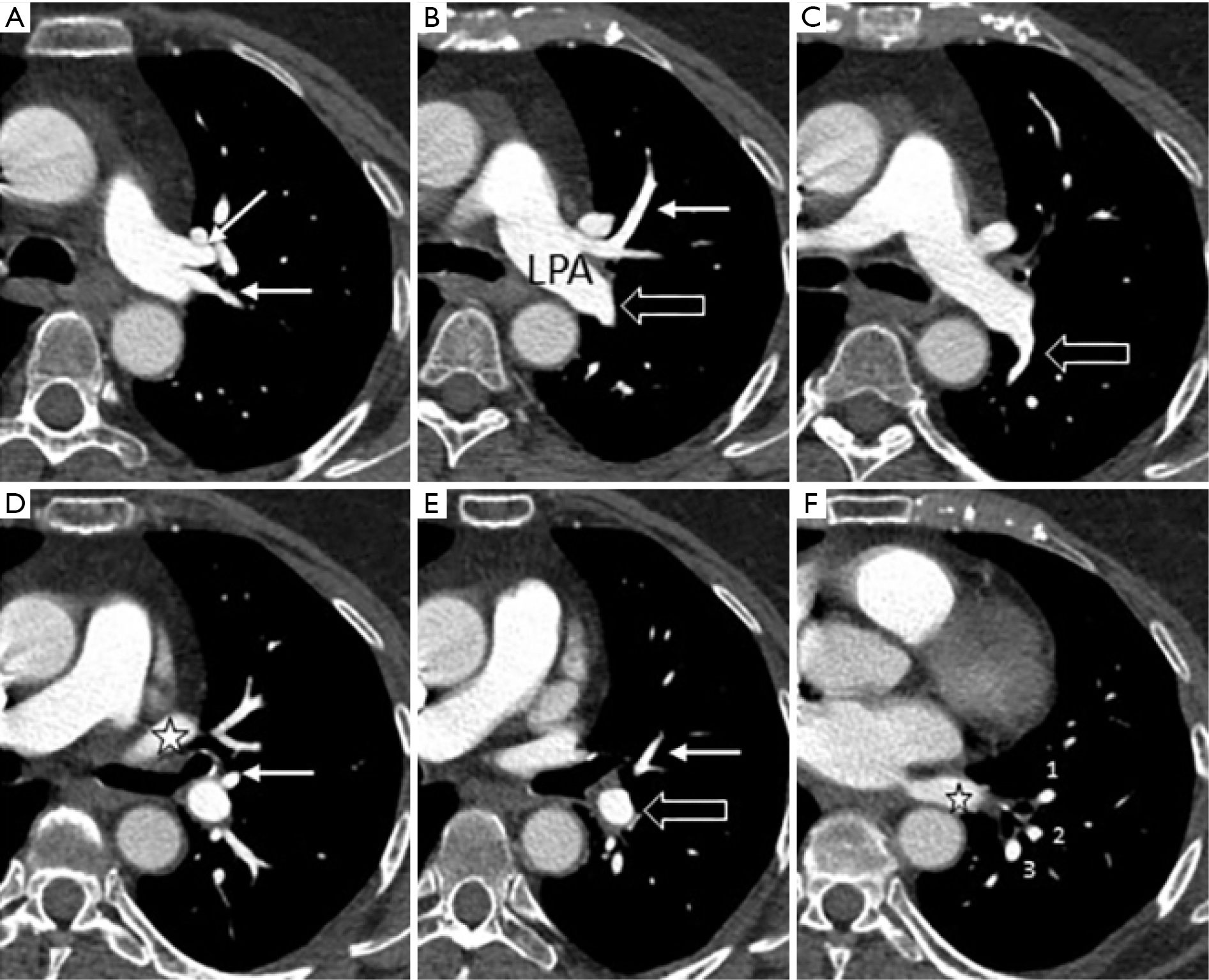 Knowledge of pulmonary vascular anatomy on cross-sectional and angiographic images is essential for diagnosis and treatment of various conditions such as pulmonary thromboembolism and pulmonary arterio-venous malformations.