The next two to three decades will see an increase in the number of cardiothoracic surgeries primarily driven by demographic changes characterized by an increase in the elderly population. Pulmonary complications following cardiothoracic surgery lead to prolonged hospital length of stay and intensive care unit admissions, raising costs in patient care and significantly increasing morbidity and mortality. The reported incidence varies significantly among institutions depending on variables such as patient selection (age, cardiopulmonary reserve, comorbidities), type of surgical intervention, level of complexity and volume of surgeries performed.

Common complications include atelectasis, pneumonia, bronchopleural fistula, and pulmonary embolism, all of which present with respiratory changes. Vascular complications limited to the pulmonary vasculature are less common, and are usually seen following lung resection, transplantation or surgery for congenital heart disease. Even though vascular complications uncommon, they are potentially life-threatening.

Bleeding after thoracic surgery, one of the most dreaded complications is rare reported in 2% following video-assisted thoracoscopic surgery (VATS) procedures, and in up to 3% after open procedures or surgery (1-3). Significant bleeding in the immediate postoperative period after lobectomy occur in <3% of lobectomy patients, and when identified in the immediate postoperative period is often managed by reintervention. The source of bleeding can be from mediastinal vessels, bronchial arteries, intercostal arteries and in less than 20% the pulmonary artery (4).

Most PAP present after thoracic trauma including chest tubes placement and intravascular catheters, from septic embolism, lung cancer, or vasculitis but may also occur after lung resection, lung biopsy or radiofrequency ablation (5). PAP could represent a life threatening condition which requires prompt diagnosis and intervention with either open surgical repair or endovascular surgery (6). In cases in which PAP develop as a postoperative complication, associated infection may be a contributing factor. Postoperative PAP actually represents a contained rupture. Hemoptysis is the most common clinical manifestation, which can be associated with hemorrhagic pleural effusion. Most PAP after pulmonary resection typically involves branch pulmonary arteries, and only rarely the pulmonary trunk (7). Contrast enhanced multidetector CT (MDCT) with contrast injection is commonly the initial imaging modality to demonstrate the vascular abnormality, but selective catheter angiography is commonly performed to confirm the diagnosis and to guide endovascular treatment (8,9). On contrast enhanced CT postoperative pseudoaneurysms manifest as a round, oval or irregular shaped variable in size saccular collection of contrast density adjacent or contiguous to the pulmonary artery, typically at the resection site (Figure 1). In the past surgical aneurysmectomy was the preferred and often the only treatment option, but more recently endovascular embolization has proven to be a viable therapeutic approach for many cases. 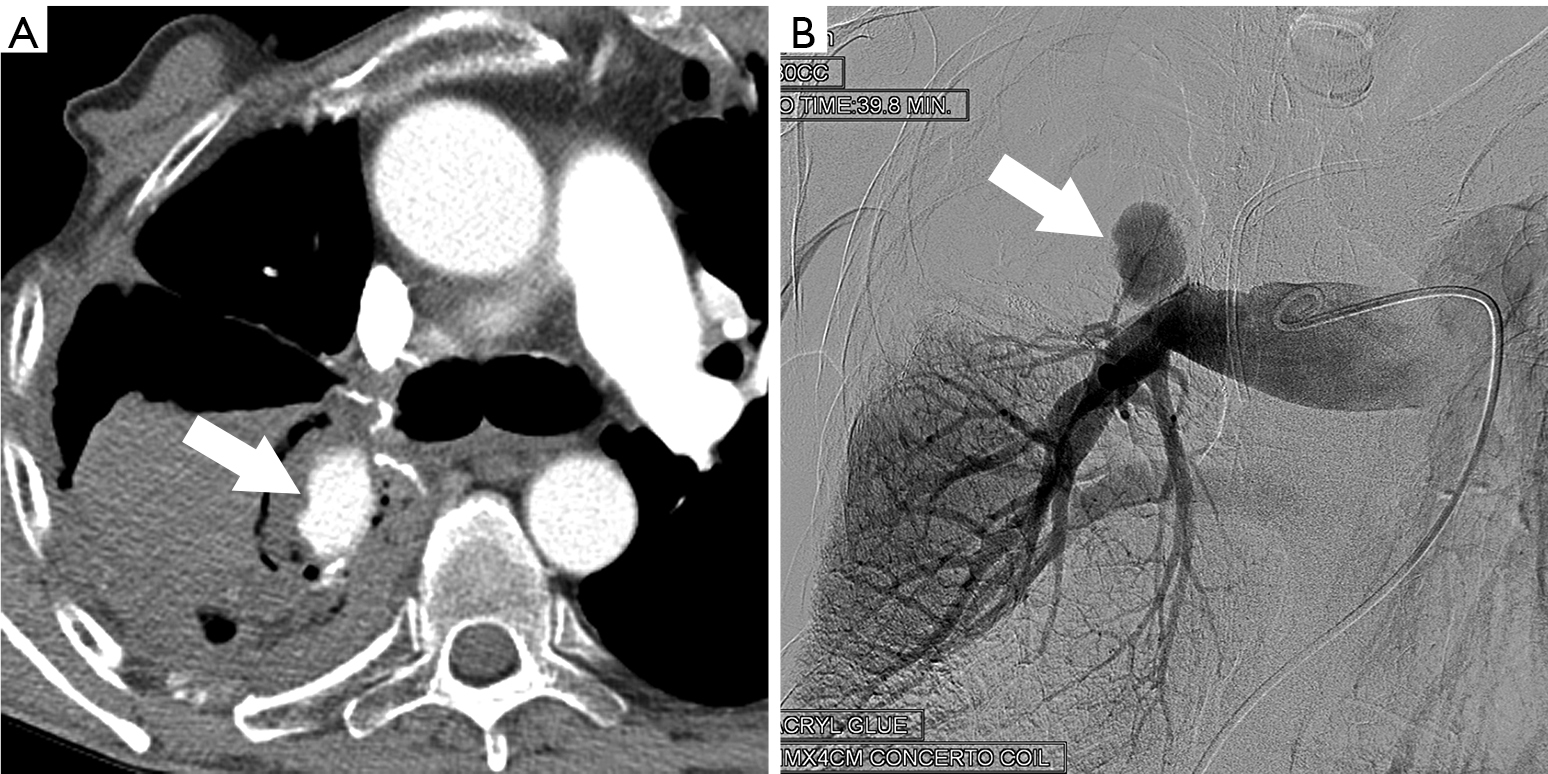 Vascular anastomotic complications following lung transplantation are rare (2–15%), and may manifest as pulmonary artery or pulmonary vein stenosis, or anastomotic venous thrombosis. Even though they are not commonly seen, they are known to be associated with significant morbidity and mortality (10). Vascular complications are more common in patients with pulmonary fibrosis and more commonly manifest as a stricture involving a pulmonary artery anastomosis rather than a pulmonary vein anastomosis. Right and left pulmonary arteries are equally affected (11). In situ thrombosis of the arterial or venous anastomosis is a less common complication (12). Stricture of a vascular anastomosis should be suspected in the presence of unexplained hypoxia and/or hemodynamic instability or pulmonary edema in the early postoperative period. The risk of pulmonary infarction is greatest in these patients since the newly transplanted lung does not have the protective pathway of the bronchial circulation. Significant stricture at a vascular anastomosis is associated with increased risk for local thrombosis which may lead to pulmonary infarction in case of arterial thrombosis, or pulmonary edema in cases of venous thrombosis.

Many centers have adopted routine use of intraoperative transesophageal echo as standard practice during lung transplantation for intraoperative recognition of vascular complications.

MDCT is considered to be the imaging modality of choice for the evaluation of the lung transplant patient when a vascular abnormality is suspected in the postoperative stage, and has replaced catheter angiography which is more commonly used to guide intervention rather than for diagnosis. MDCT with multiplanar reconstruction is the best noninvasive test than can precisely demonstrate the extent and degree of the stenosis and provides a reference baseline for follow-up. Isotope scanning may also help in the evaluation of impaired pulmonary perfusion, but has poor spatial resolution to demonstrate the anatomy, morphology and location of the vascular stricture (Figures 2-5). 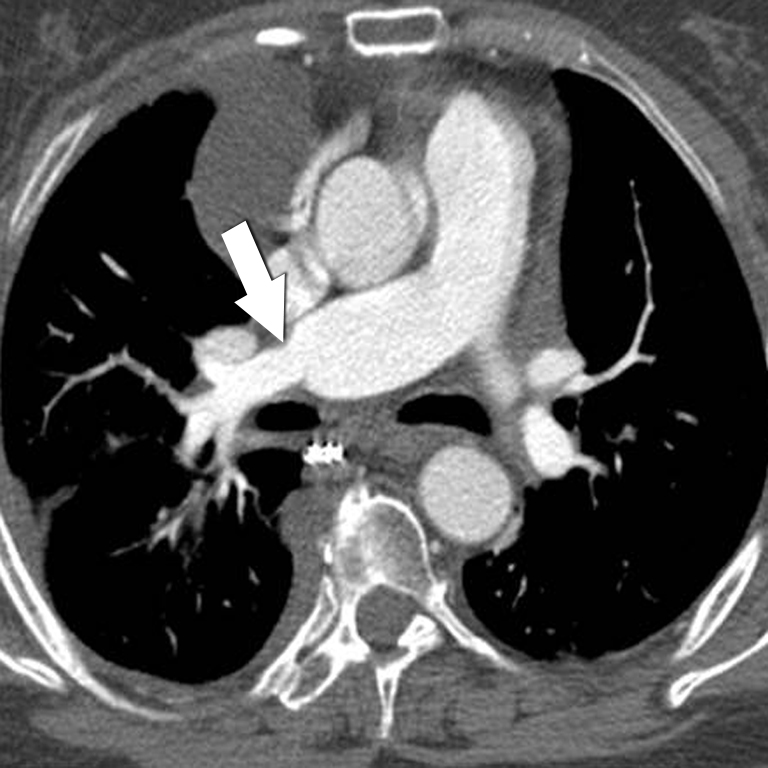 Figure 2 Pulmonary artery mismatch in a 63-year-old female patient status post bilateral lung transplant. Contrast enhanced CT shows the discrepancy in size between the recipient and donor pulmonary arteries with a step-off configuration at the level of the anastomosis (arrow). 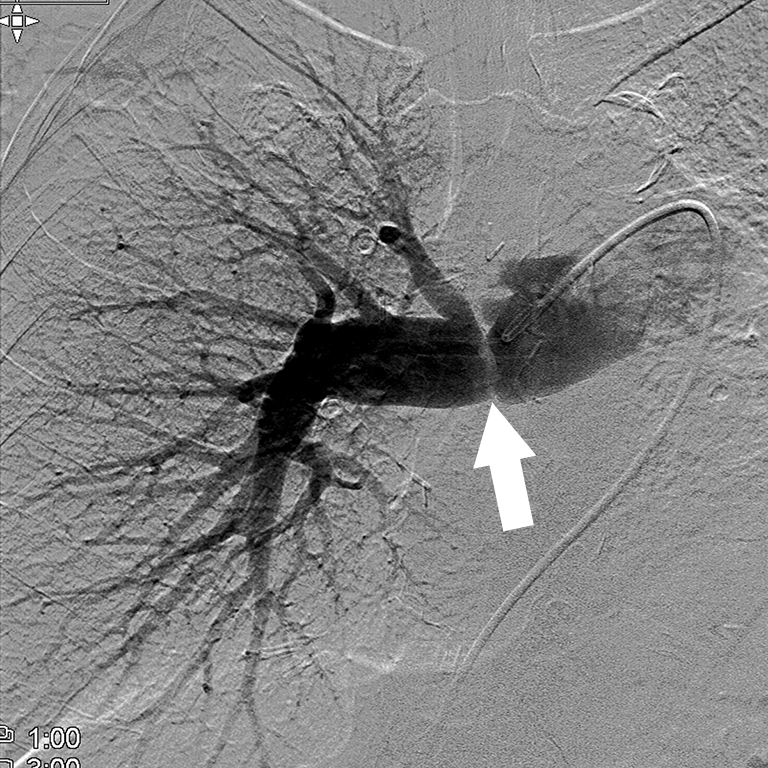 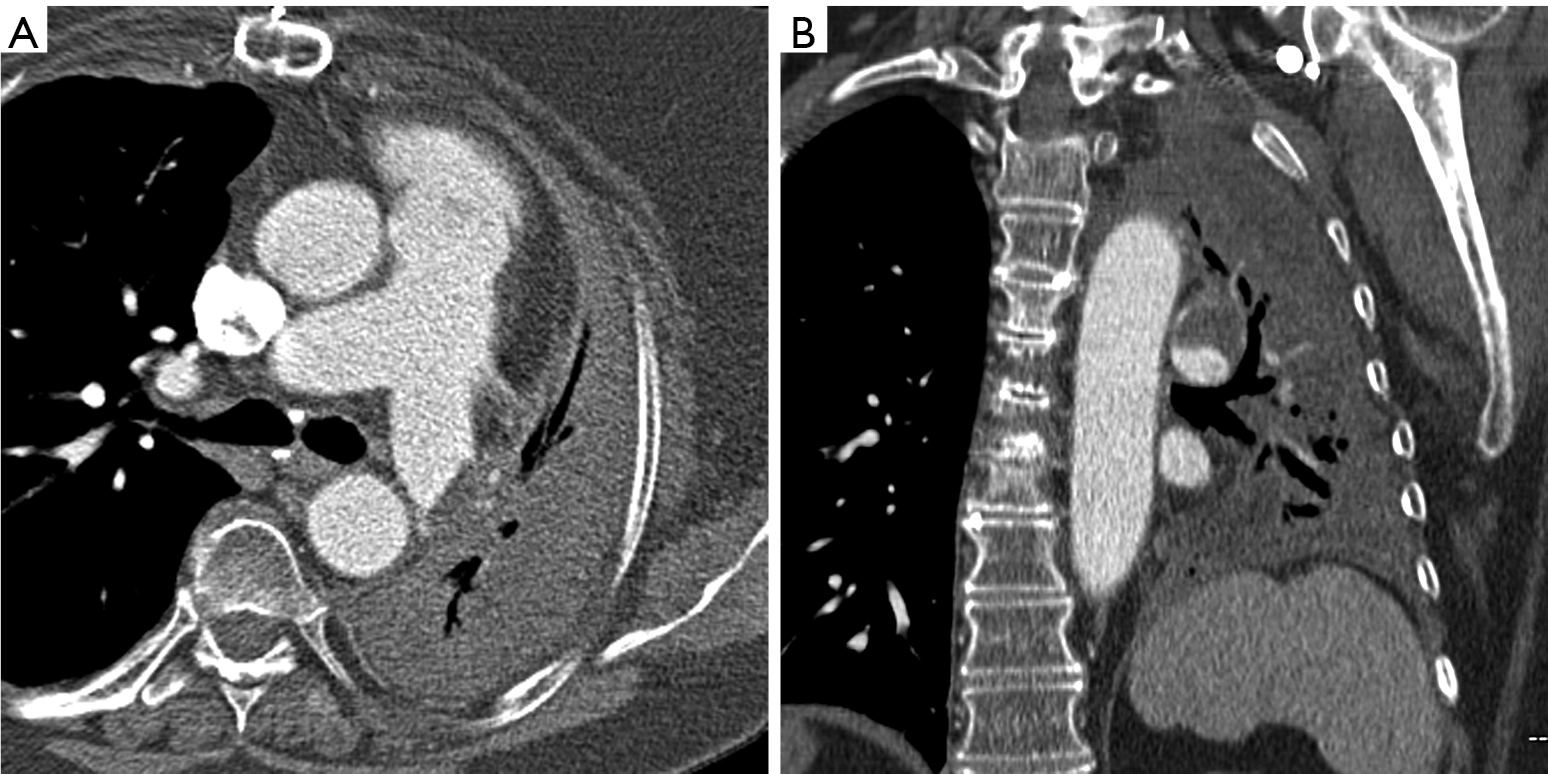 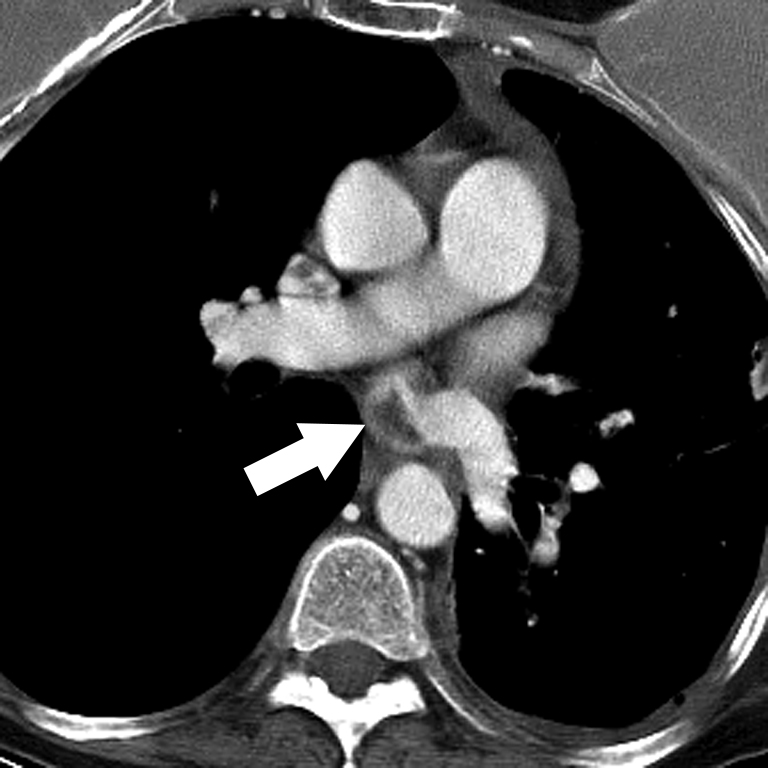 The treatment of vascular complications range from a conservative medical management, to a more aggressive approach with endovascular intervention (angioplasty/stenting) and surgical revision, depending on the degree of obstruction, time elapsed from transplantation to diagnosis, stricture morphology, overall clinical condition of the patient and available expertise. In general those cases identified with intraoperative ultrasound are treated while the patient is the operating room, whereas those diagnosed after several weeks are best treated with an endovascular intervention.

Systemic artery to pulmonary vein fistula (SAPVF) is a very rare condition which can develop as a complication of tumor, infection, inflammation, trauma or as a rare complication following thoracic surgery. They represent an abnormal communication between a systemic artery commonly an internal mammary, subclavian or intercostal artery with outflow into a pulmonary vessel, typically a pulmonary vein, and occasionally a pulmonary artery (arterio-arterial fistula). Roughly 50% of SAPVF are congenital, and occur in association with congenital heart disease or pulmonary artery hypoplasia. The remainder 50% are acquired and result from malignancy, infectious or inflammatory process with pleural involvement or from trauma or surgery (13). The anatomic connections can be quite variable, as well as their clinical manifestation.

Most post-operative SAPVF are diagnosed years after the surgical event, in some case more than 20 years later, since they are commonly asymptomatic. Patients with large fistulas with significant shunt fraction may manifest with heart failure (14). In case of a SAPVF that develops after revascularization surgery with coronary artery bypass graft (CABG) surgery a common pattern consists of fistula between the left internal mammary artery (LIMA) and a pulmonary artery or vein. When this is the case coronary steal phenomenon may manifest with worsening angina (15-17).

Treatment options include embolization or surgical resection with arterial ligation. Because SAPVF are commonly asymptomatic, are well tolerated and complications are rare, observation and clinical follow-up is recommended in many cases. 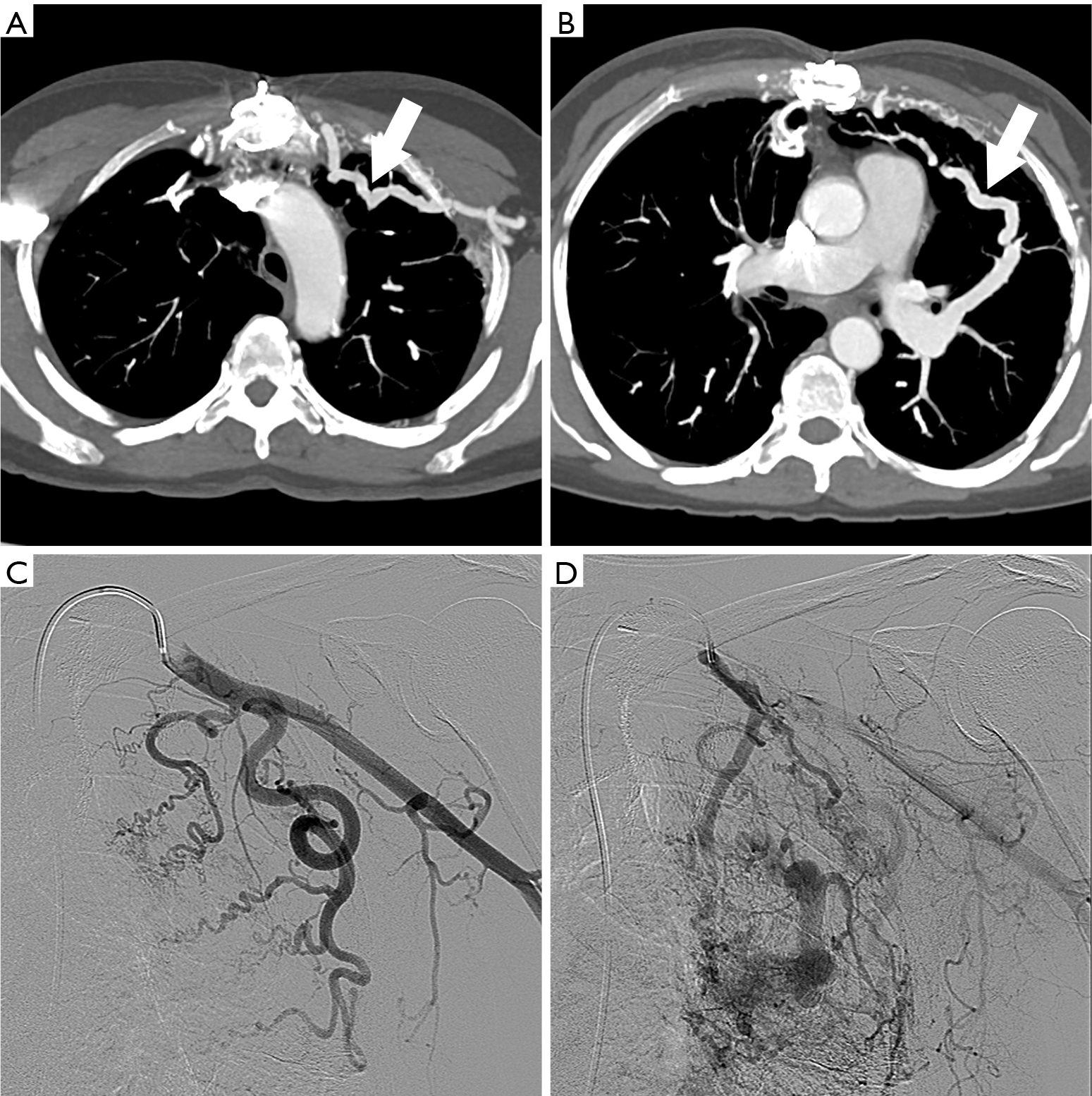 A CPF is an uncommon coronary artery anomaly in which there is an abnormal communication between a coronary artery and the pulmonary artery. Even though most CPAF are congenital in origin, the majority are diagnosed in adulthood. A minority are iatrogenic complication from surgical intervention for lung transplantation, CABG, mitral or aortic valve replacement, septal myomectomy, or from coronary revascularization, or percutaneous biopsies (18,19). Cardiac gated CTA and intracoronary artery catheter angiography allows demonstration of the fistulous communication which manifests as an irregular and often tortuous small vessel on the surface of the pulmonary trunk or as an abnormal blush of contrast passing into the less opacified pulmonary artery (20) (Figure 7). 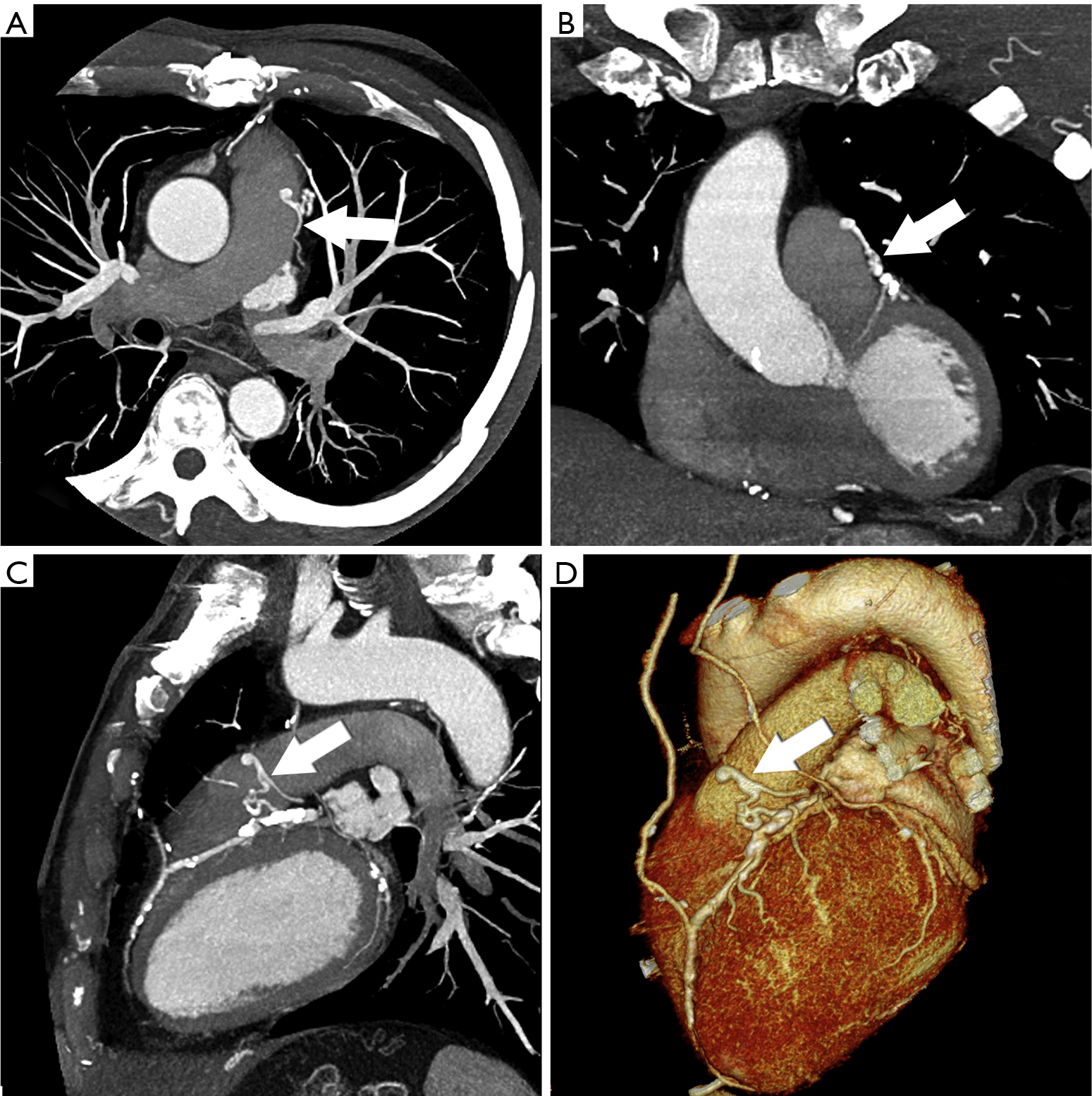 Postoperative lobar torsion following pulmonary lobectomy or lung transplantation is a rare but often serious complication associated with pulmonary ischemia, pulmonary infarction and irreversible tissue necrosis, seen in less than 0.4% of lobectomy patients and less than 0.3% of lung transplant patients. Torsion occurs when a lobe or the entire lung partially or completely rotates around the hilum compromising arterial supply, venous and lymphatic drainage and corresponding airway. After lobectomy, the vast majority (70%) affects the right middle lobe. Lobar torsion may precipitate pulmonary artery rupture and massive bleeding (4,21).

Imaging findings suggestive of this complication include collapsed or consolidated lung in an atypical position after surgery on conventional radiograph. CT better demonstrates rotation, tapering and obliteration of the proximal pulmonary artery and bronchus of the affected lobe or lung with pulmonary venous obstruction and amorphous soft-tissue attenuation of the hilum with poorly enhancing peripheral pulmonary parenchyma (22,23) (Figure 8).

It is not clear whether progressive enlargement of the clot may occur and eventually embolize to the remaining portion of the lung. Symptomatic chest pain and even death associated with significant amount of stump thrombus has also been reported raising concern on when it would be appropriate to treat affected patients with systemic anticoagulation (26,27). Whether anticoagulation treatment is required in particular in asymptomatic patients remains uncertain (Figures 9,10). 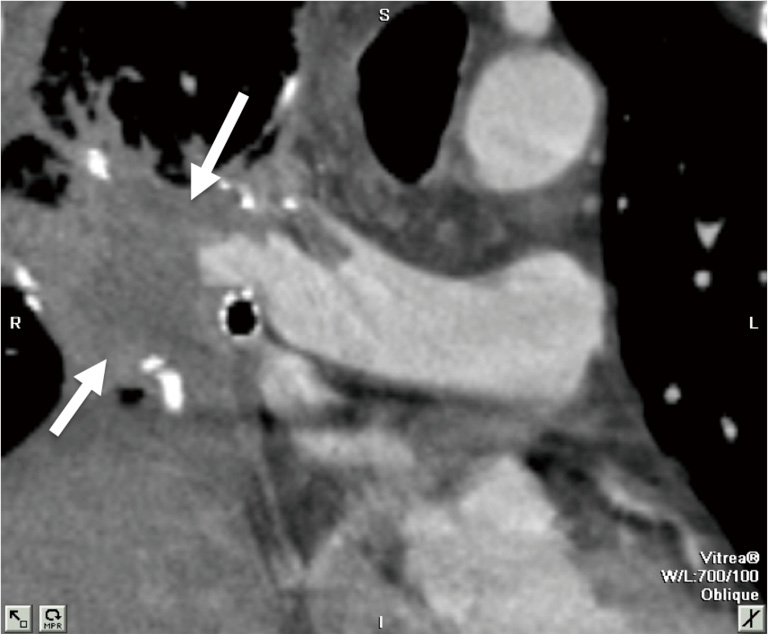 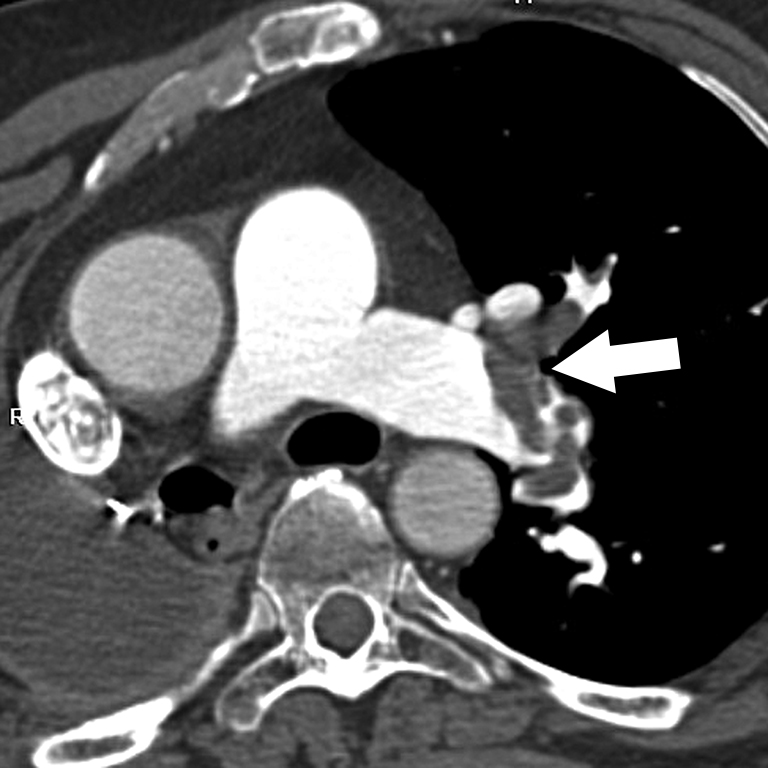 Figure 10 Post-pneumonectomy pulmonary embolism. Contrast enhanced axial image at the level of the left hilum shows extensive filling defect in the left pulmonary artery (arrow) in this patient with previous right side pneumonectomy.

Multimodality imaging plays a critical role in the follow-up of patients with repaired congenital heart disease. Patients with tetralogy of Fallot (TOF) which is the most common complex congenital heart disease, have significantly improved survival rates into adulthood after total repair which includes ventricular septal defect closure, and relief of pulmonary outflow obstruction. Pulmonary regurgitation occurs in a large number of patients (80%). True and false aneurysms of the pulmonary infundibulum are well known complication after surgical correction of congenital heart disease, reported in as much as 25% of TOF patients. These typically occur at the level of the trans-annular patch repair or infundibular muscle resection. These have also been reported following surgical correction of transposition of the great arteries (Bidirectional Glenn), and single ventricle (Fontan operation). Right ventricular outflow tract obstruction and pulmonary artery stenosis (15%incidence), are also common and require imaging for appropriate diagnosis and treatment (28). Both CTA and MRI are very useful in the follow-up of these patients providing detail anatomic (CTA) and functional information (MRI) of the heart and great vessels (29-31) (Figures 11,12). 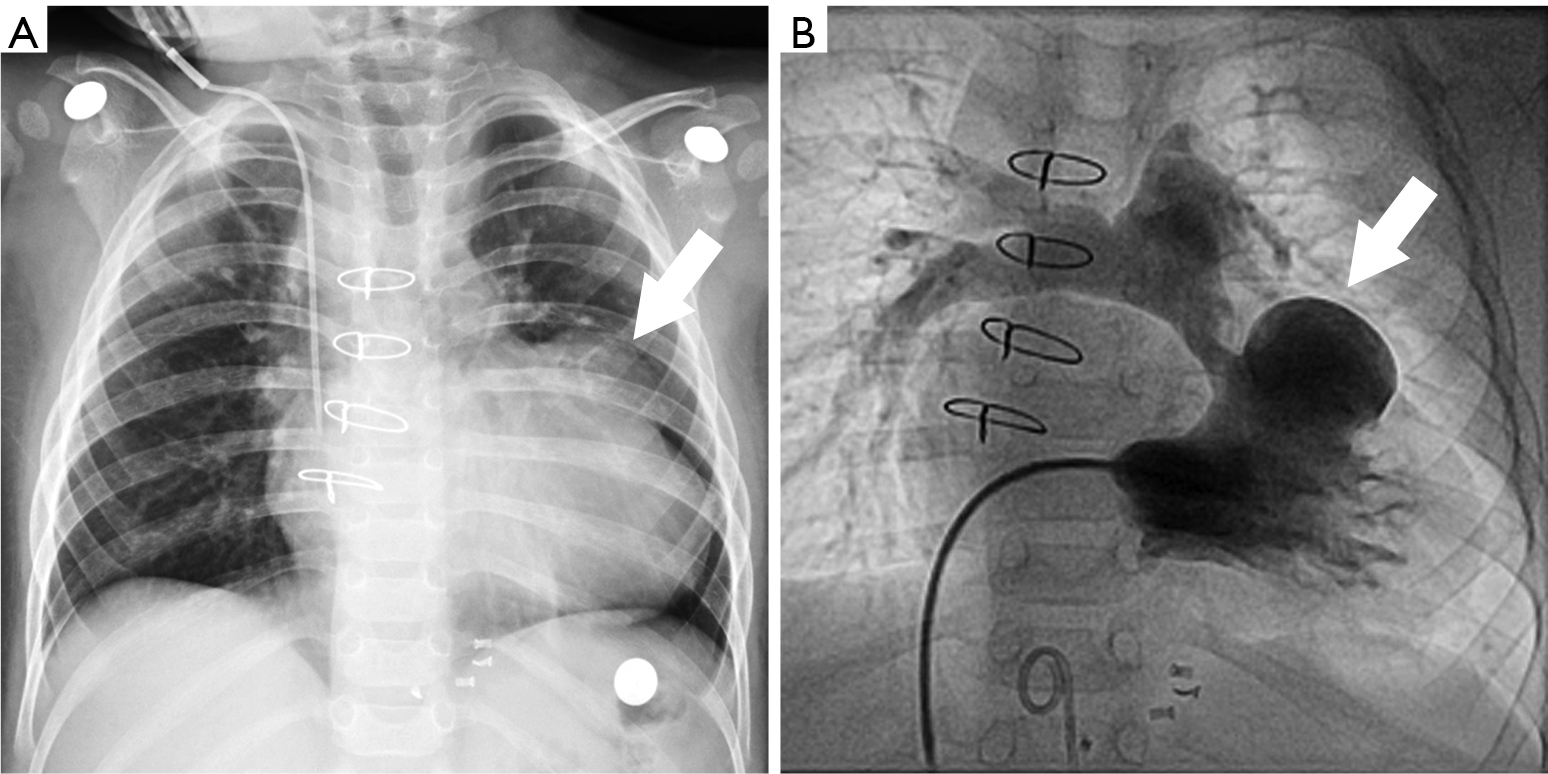 Central or peripheral pulmonary artery branch stenosis is also common in patients with TOF, or may develop as a postoperative complication of arterial switch procedure (Jatene arterial switch), which is the surgical procedure of choice for neonates with D-transposition of the great arteries. Similarly CTA and MRI are good imaging modalities for the diagnosis and assessment of this complication (32) (Figures 13).

The evaluation of vascular complications in the postoperative patient often requires a rapid and reliable imaging modality for the assessment of these potentially life-threatening conditions. Multidetector CT (MDCT) has become established as an invaluable imaging option—often the preferred imaging modality and best option—due to its ability to directly visualize the entire cardiothoracic vasculature, airways, lung parenchyma and mediastinum with good temporal and spatial resolution.