Pulmonary vein stenosis (PVS), though a relatively uncommon occurrence (1,2), is associated with significant morbidity and mortality if not recognized and treated promptly. In adults PVS is often secondary to infiltration/extrinsic compression by a mediastinal or lung process. More recently, the increased use of catheter-based ablation therapy for treatment of atrial fibrillation has led to a new cohort of patients with PVS. Radiologists play an important role in the identification and evaluation of PVS, however this requires an understanding of the patient population at risk, the direct and indirect imaging findings of PVS on cross-sectional imaging, as well as relevant information in the treatment of this condition. 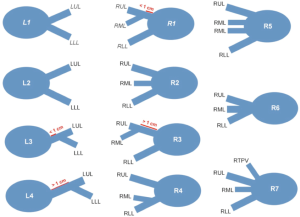 Any neoplastic disease occurring in the mediastinum and lungs can cause PVS by either infiltration or extrinsic compression of a pulmonary vein. Common neoplastic diseases that can cause PVS include primary lung cancer (5-9) and lymphoma (10) (Figure 3A). Non-thoracic primary neoplasms can also metastasize to the mediastinum and lungs and cause PVS (11). Non-neoplastic causes of PVS include fibrosing mediastinitis (12-16) (Figure 3B), sarcoidosis, and mediastinal cysts (17-19) (Figure 3C). 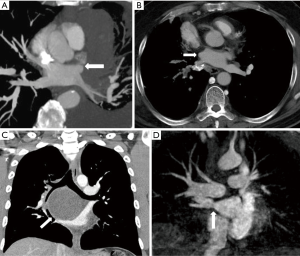 Iatrogenic causes of PVS include complications of percutaneous radiofrequency catheter ablation for atrial fibrillation, known as pulmonary vein isolation (PVI), and cardiothoracic surgery for repair of congenital heart disease. Even though the incidence of complications after PVI is low, the increasing use of this procedure makes it currently the most common iatrogenic cause of PVS in adults (2) (Figure 3D).

Imaging evaluation of the pulmonary veins

Although a routine chest CT scan with contrast typically depicts the pulmonary veins, more detailed anatomic depiction is achieved with the use of electrocardiogram (ECG)-gating for patients in normal sinus rhythm. CT has the advantage of providing good spatial resolution and a three-dimensional (3D) data set within a short scanning time. However, this imaging modality is associated with ionizing radiation, which can be a concern, especially in young patients (2).

MRI can be used to image the pulmonary veins (21,22). Many different techniques have been used, including traditional contrast-enhanced MRI (23) and, more recently, time-resolved magnetic resonance venography (MRV) (24). MRI, like CT, can provide a 3D data set, but has the advantage of not using ionizing radiation. However, its spatial resolution is slightly inferior to that of CT, it requires a longer scanning time, and it may be contraindicated in patients with metal implants (2).

For assessment of the pulmonary veins, CT and MR are typically performed with an intravenous contrast material, which should not be used in patients with significantly decreased renal function. The iodine-based contrast material used for CT is potentially nephrotoxic (25), whereas the gadolinium-based contrast material used for MRI is a risk factor for nephrogenic systemic fibrosis in patients with a very low glomerular filtration rate (26). Noncontrast MRV techniques have been used to visualize the pulmonary veins (27,28), but they are not regularly employed in the clinical setting, and our own experience has shown contrast techniques to be, on the whole, more reliable in depiction of the pulmonary vein anatomy.

Direct cross-sectional imaging findings in patients with PVS include absence, abrupt cut off, and narrowing of a pulmonary vein (29,30) (Figure 4A,B). It is important to note that sometimes the left inferior pulmonary vein can occasionally become physiologically compressed between the left atrium and the descending thoracic aorta, mimicking a true stenosis (30). Because of the many described variations in pulmonary vein anatomy, comparison with old studies is important to confirm PVS.

Indirect cross-sectional imaging findings in patients with PVS include regional lung edema, lung opacities that wax and wane, lung infarct, lung fibrosis, decreased lung perfusion, and longer blood/contrast transit time in the lung that is drained by the stenosed pulmonary vein. All of aforementioned indirect cross-sectional imaging findings may be mistaken for other conditions. 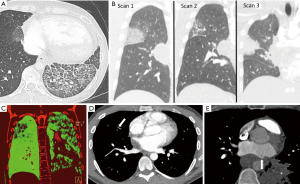 Screening for PVS after PVI

Although the incidence of PVS after PVI is low, the consequences of this condition can be life threatening. Therefore, early detection of PVS is essential to prevent irreversible lung vasculature changes.

Symptoms caused by PVS commonly arise weeks to months after PVI (30), although there are reports of symptoms developing up to a year after PVI (20). Symptoms include shortness of breath, dry cough, and recurrent hemoptysis (2), and in some instances chest pain.

Every patient who presents with respiratory symptoms after having undergone an ablation procedure should be considered for PVS screening. At this time, there is no consensus on how to screen asymptomatic patients after PVI. At our institution, screening is performed at 3 months by tailored CT or MRI examination. If a significant stenosis is found, another imaging study is performed 3 months later (20).

Percutaneous intervention for PVS after PVI

CT, the noninvasive exam with the best spatial resolution, has been shown in some instances to overestimate the severity of PVS after PVI. In many cases, what appears to be an occluded pulmonary vein is shown on angiography to be a pulmonary vein with a tiny opening through which a stent can be placed when appropriate (2). 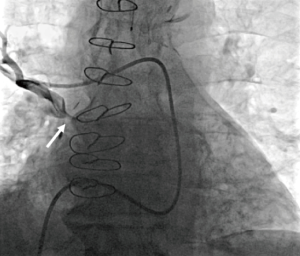 PVS after PVI may be treated by percutaneous intervention. The decision to treat depends on the severity of stenosis and the presence of symptoms. Please note a discussion of treatment of PVS from extrinsic compression is limited to case reports.

It is uncertain whether treatment is beneficial in asymptomatic patients with PVS. Most of this uncertainty arises from a lack of knowledge of the natural history of PVS. It is not known which patients will develop symptoms over time and which stenosis will progress to a complete occlusion, which could preclude the possibility of treatment. In our institution, the decision to treat asymptomatic patients is taken on a case-by-case basis in conjunction with the patient (20).

There are two types of percutaneous procedures that can be used to treat PVS: ballooning and stenting. Ballooning, the first method used, has been associated with a rate of restenosis as high as 70% (31,32). Stenting is also associated with restenosis, but at a lower rate of around 10% for relatively large stents (20). Some studies have shown a decrease in the rate of restenosis when a stent with a diameter of at least 10 mm is used (31,33). However, not all stenotic veins can accommodate a large stent. In fact, some pulmonary veins demonstrate not just a focal stenosis but also diffuse hypoplasia. Placing a stent significantly larger than the vessel reference diameter (maximal diameter of the pulmonary vein just distal to the stenosis) can lead to a proliferative reaction at the edge of the stent that may cause restenosis at the edge with progression of the stenosis into the vessel (20). Therefore, at our institution, in the proper clinical setting, any pulmonary vein that can accommodate a stent of at least 8 mm in diameter is stented (20) (Figures 7,8); for pulmonary veins that can only accommodate stents smaller than 7 mm in diameter, we perform ballooning with the knowledge that the restenosis rate will be high (20). Some veins increase their reference diameter after this procedure, enabling the placement of a larger stent in a second procedure (20).

To plan the stenting procedure, the interventionalist should know the minimal diameter at the stenosis, the maximal diameter of the pulmonary vein just distal to the stenosis (also called the reference diameter), and the distance from the stenosis site to the first distal branching point. The reference diameter is the theoretical normal diameter of the pulmonary vein and represents the diameter to which the stenosis can potentially be dilated. The distance from the stenosis site to the first branch is used to assess whether there is enough length to accommodate the stent in the central pulmonary vein proximal to the branching point. Although a distal branch can be crossed as long as a conventional, not covered, stent is often used, this typically means the stent will be dilated to a smaller diameter, namely that of the branch it is extending into. These measurements are derived from multiplanar reconstruction images, usually from a CT scan, although an MRI scan can also be used (Figure 9A,B,C). 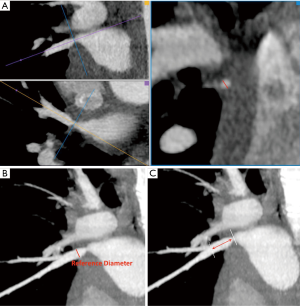 When PVS progresses to complete occlusion, it is sometimes possible to cross the occluded segment and recanalize the vein, followed by either dilation or stenting depending on the reference diameter (34). However, if there is total obliteration of the vessel, percutaneous treatment is no longer possible. Chronic and complete obliteration of a pulmonary vein can result in lung infarction, which may manifest with cough, hemoptysis, wheeze, and pleuritic pain (35). If the patient’s quality of life is significantly impaired, an open thoracotomy and lobectomy may be necessary to alleviate the symptoms (35,36).

Bleeding complications are the most frequent and serious complications post venoplasty and stenting of PV. Usually, these are acute in presentation in a perioperative setting. Several other early and delayed complications have been discussed in multiple case series; these include pulmonary vein perforation, stent dislodgment, hemoptysis, pulmonary hemorrhage, ST-elevation and transient neurologic deficits. The complication rates range from 0% to 25%, but need to be kept in mind before considering intervention (37). In a series of 98 patients requiring 145 catheterizations, only two vein perforations were reported (20). In this same series, only one stent dislodgement was reported. Transient hemoptysis is a self-limited condition, usually resolving within 24 to 72 hours after the procedure (20).

A more delayed complication is in-stent restenosis (Figure 10). The risk of restenosis depends on the diameter of the stent that was placed, the reference diameter of the pulmonary vein, and the time interval between the PVI and the intervention for PVS (20). 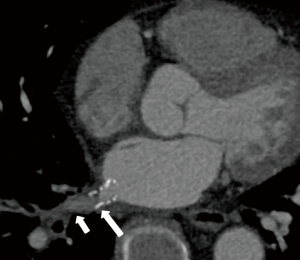 A useful test for following up with patients who have undergone a percutaneous procedure for the treatment of PVS is radionuclide quantitative lung perfusion imaging. In quantitative flow imaging, regions of interest are drawn around each lung, and the relative blood flow is calculated (Figure 11). 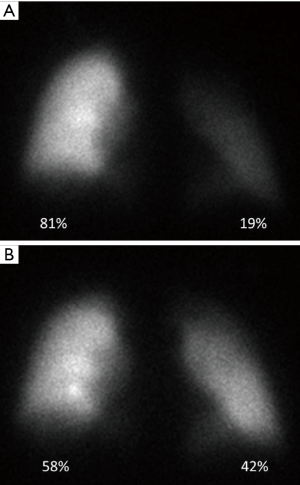 PVS, though uncommon, is a condition with important clinical ramifications. Radiologists can play a crucial role in the identification and evaluation of PVS, however this requires an understanding of the patient population at risk, the direct and indirect imaging findings of PVS on imaging, and what information is relevant in the treatment of this condition.

The authors thank Megan M. Griffiths, MA, for her editing contribution to the manuscript.