Pulmonary arterial hypertension (PAH) is a rare, incurable disorder typified by small vessel arteriopathy which results in elevation of the mean pulmonary artery pressure (≥25 mmHg) with progressive and debilitating symptoms of right heart strain (1). In contrast, chronic thromboembolic pulmonary hypertension (CTEPH) is a potentially curable form of pulmonary hypertension (PH) caused by prolonged pulmonary artery stenosis or occlusion from organized large vessel thromboembolic material. Pulmonary endarterectomy (PEA) is considered a curative therapy but an estimated third of cases in the European CTEPH registry were considered poor surgical candidates primarily due to patient comorbidities or surgical inaccessibility of the distal pulmonary arterial lesion (2). Untreated or undiagnosed patients have a poor clinical outcome with an average lifespan of approximately 7 years (3,4).

Balloon pulmonary angioplasty (BPA) was first described in 1988 but has only recently emerged as an alternative intervention of non-surgical candidates with CTEPH (5-10). Advances in pulmonary angioplasty reperfusion techniques have demonstrated promising pathophysiologic and clinical outcomes while significantly reducing the morbidity and mortality traditionally associated with BPA. Lack of technical experience, inherent morbidity of the intervention, and lack of specialized centers are limiting factors for widespread use.

The incidence of CTEPH is difficult to estimate but has been reported in 0.4–3.8% of patients following an acute thromboembolic event (11-13). The reason why only a fraction of patients develop CTEPH is unknown. Current data may suggest a variety of etiologies including genetic predisposition, disrupted thrombus recanalization with impaired angiogenesis within the thrombus, and impaired thrombolysis due to infection and/or a pro-inflammatory thrombus microenvironment (14,15). The end outcome is a highly adherent, organized thrombus that may promote vessel stenosis or obstruction with resultant PH (16).

Patients suffering from CTEPH typically present with nonspecific symptoms of cor pulmonale including dyspnea, fatigue and edema. Initial screening studies including echocardiography may confirm evidence of right heart dysfunction. Prior history of thromboembolic disease is typically present but not necessary for diagnosis. Data from the European CTEPH registry only showed a documented history of pulmonary embolism in 75% of patients and a history of deep vein thrombosis in 56% of patients (2). For this reason, it is recommended to screen all patients presenting with PH for CTEPH.

The diagnosis of CTEPH is confirmed with hemodynamic evidence of PH and imaging evidence of chronic pulmonary thromboembolic disease after three months of anticoagulation therapy while excluding additional causes of PH. Right heart catheterization is necessary to establishing the diagnosis of PH with findings of a mean pulmonary arterial pressure ≥25 mmHg, pulmonary vascular resistance greater than 3 Wood units, and a pulmonary capillary wedge pressure ≤15 mmHg.

Imaging is essential to the diagnosis of CTEPH. CTEPH is considered a large vessel disease that manifests as a defect of at least one pulmonary artery segment on perfusional imaging (Figure 1) as opposed to idiopathic PH, a predominantly small vessel disease affecting the pulmonary arterioles. Nuclear medicine ventilation-perfusion scans remain an excellent screening exam to rule out CTEPH with a sensitivity of 97.4% (17). Computed tomography angiography (CTA) is a commonly obtained test in the initial evaluation and have a reported specificity of 99% (17), but is not the recommended screening test currently because of decreased sensitivity. CTA has the added benefit of permitting evaluation of the pulmonary parenchyma as a cause of PH. Additionally, CTA may be useful in appreciating bronchial artery anatomy, because collateralization is often present in these patients and contributes to the increased incidence of hemoptysis. Other non-invasive imaging techniques including MR angiography and dual energy or spectral CT are promising imaging techniques and demonstrate promise in the evaluation of CTEPH patients. Imaging of CTEPH has been excellently reviewed by Renapurkar et al., 2017 (16).

Pulmonary angiography is traditionally considered the gold standard for the evaluation of CTEPH and is used for operability assessment. Angiographic techniques allow for more complete evaluation of pulmonary blood flow and permits for selective interrogation of areas of concern. Angiographic findings of chronic thromboemboli include intimal irregularities (including pouching defects), webs, linear filling defects termed slits or synechia, occlusion, or a generalized branchless or “pruned appearance” of the pulmonary arteries (18).

Cone beam CT is an important adjunct in the evaluation of pulmonary arterial lesions, particularly in determining if the lesion is amenable to endovascular intervention. Four categories of organized thrombus have been described on cone beam-CT: webs, webs with slits, slits, and complete obstruction or narrowing without distal runoff (19). Lesions with complete obstruction or narrowing are not considered amenable to percutaneous therapy. Similar to cone beam CT, intravascular ultrasound (IVUS) may also be helpful in the evaluation of lesions and appropriate sizing of vessel diameter.

PEA is considered the curative treatment and results in improvement of symptoms and a 90% 5-year survival. However, PEA is a technically challenging operation performed at only selective, high volume centers of excellence with the required ancillary support staff. Many patients are not amenable to surgical intervention due to lesion location and operative comorbidities (15).

Anticoagulation therapy is a mainstay for all patients with CTEPH. Additional medical therapies may be used in surgically inaccessible or residual disease. Riociguat is a soluble guanylate cyclase stimulator and is the only Food and Drug Administration (FDA)-approved pharmacologic therapy for CTEPH. The largest clinical trial demonstrated 39% improvement of symptoms at 2 years with a survival rate of 93% in surgically inoperative candidates and patients with residual PH after PEA (20,21). Additionally, recent clinical trial also revealed the efficacy of the endothelial receptor antagonist Macitentan in inoperable CTEPH (22). Off-label use of medications including prostacyclin analogs and phosphodiesterase 5-inhibitors has also been described.

BPA was first described in 1988 as a potential alternative treatment for patients with CTEPH not amenable to PEA (5). Initial studies demonstrated unacceptably high levels of morbidity and mortality but refined techniques have allowed for BPA to emerge as a potential therapy. Recent studies primarily performed in Japan and Scandinavia endorse the selection of patients with surgically inaccessible lesions or residual PH after PEA, poor functional status after conventional anticoagulation therapy, and absence of contraindications to endovascular intervention.

The concept of the BPA is straightforward, relief of a stenosis decreases pulmonary arterial resistance and reduces right heart afterload (Figure 2). Access is obtained with a 9-Fr sheath through the right internal jugular or common femoral vein. The internal jugular approach is traditionally more amenable for the treatment of right pulmonary artery lesions while the femoral approach is easier for the contralateral side. A guiding 6-Fr catheter is placed through a 6-Fr introducer sheath in order to select the pulmonary artery of interest. The lesion is ultimately traversed by an “0.014” guidewire.

Lesion selection and treatment is guided by the experience of the operator, lesion characteristics and location, and baseline patient risk factors (19,23). Many methods including traditional angiography, wedged angiography, cone beam CT, and IVUS have been described for the evaluation of each lesion. Webs, slits, and incomplete obstructions are considered very responsive to therapy while complete occlusions and focal outpouching defects are poor targets given risk of perforation (23). Cone-beam CT and IVUS have the additional advantage over angiography because they can determine the native vessel diameter and may guide appropriate balloon sizing. Empiric use of 2 mm balloons for subsegmental lesions and 4 mm balloons for segmental lesions has also been described.

Lesion selection is based on hemodynamic significance by angiographic appearance and pressure gradients. Inferior lobe and right lung lesions are prioritized given the increased blood flow to these locations. Intervention is limited to 1–2 pulmonary segments with minimal vessel dilation advocated during initial BPA session and in high-risk patients to assess patient response to therapy and minimize the risk of significant reperfusion pulmonary edema (RPE). Typically, 2–5 staged sessions of BPA are scheduled to allow for progressive dilation to maximize efficacy while minimizing cardiovascular risk. The current goal is to ultimately reduce the mean pulmonary artery pressure to <30 mmHg to relieve symptoms of right heart dysfunction.

Recent studies demonstrate that multisession BPA improves hemodynamic and functional status as summarized in Table 1 (8-10,24-26). BPA has been shown to be a successful method to decrease mean PAP and pulmonary vascular resistance, effectively decreasing right ventricular afterload. Functional capacity as defined by WHO criteria for PH and 6-minute walking distance improved in all studies. A preliminary study of 13 patients also demonstrated improved cardiopulmonary testing with diminished ventilatory inefficiencies and improved peaked oxygen consumption (27). 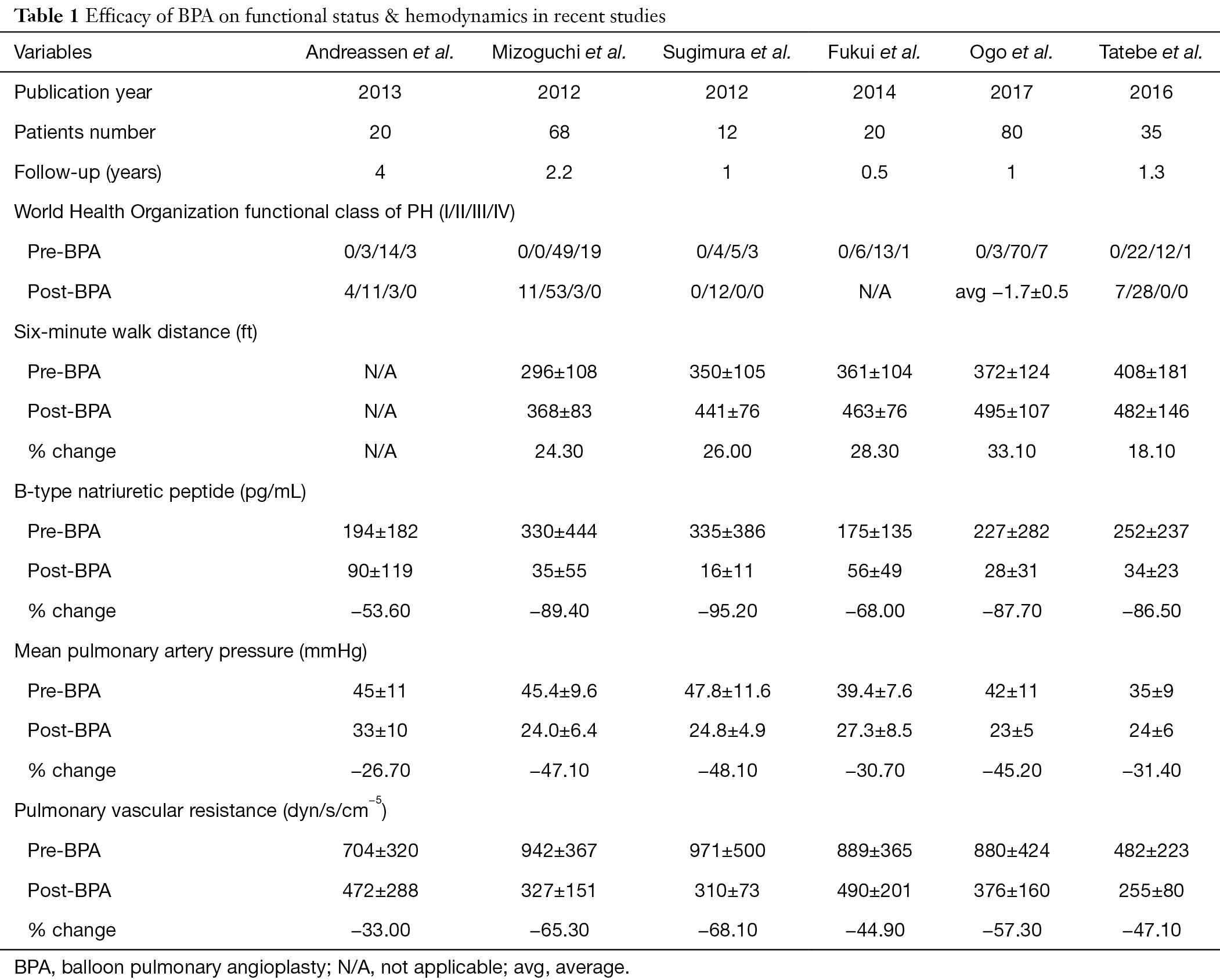 Formal investigation of BPA compared to medical therapy or PEA are lacking. The largest retrospective study of 138 patients reported >97% 2-year survival in patients who received an intervention groups (BPA or PEA) as compared 82% survival in patients who received medical therapy alone (30). However, case matched data is not available at this time and further clinical investigation of BPA is needed. Currently, these techniques are being used for different patient populations in CTEPH centers across the United States and Europe, with PTE surgery considered the mainstay for proximal disease, BPA being utilized for more distal disease or those with unacceptable operative risk, and medical therapy for those with contraindications to both procedures or persistent PH post-procedure.

Intraprocedural complications of BPA most critically focus on vessel injury with perforation, dissection, and rupture. These complications may range from subtle intimal injury to overt extravasation. Recent studies report angiographically apparent perforation in 0.9–7.5% of cases (7,8,10,25,31). Appropriate lesion selection and conservative balloon sizing is critical in minimizing risk of perforation. Avoidance of pouch-type defects and occluded vessels is recommended (19). Treatment of perforation includes balloon occlusion of the vessel of interest for 5–20 minutes, covered stent placement, or coil embolization in severe circumstances. Selective occlusion of the vessel of interest may worsen symptoms of PH and should be utilized with caution. Severe hemoptysis secondary to perforation may require isolated bronchial intubation, anticoagulation reversal, and intensive care.

RPE is the post-procedural complication of BPA traditionally associated with high morbidity and mortality. RPE is thought to be sequelae of increased blood flow, vascular friability, and loss vascular hemodynamic response mechanisms. RPE must be viewed on a spectrum from subclinical, radiographically RPE to patients with clinical presentations of hypoxia and cardiopulmonary collapse. Radiographically apparent RPE presents as a waxing pulmonary opacity in a distribution of the treated segment that is present in approximately 53–60% of cases and in 70% of patients after initial BPA session (19,23). Clinically relevant RPE manifests with concomitant hypoxia and respiratory failure remains the complication associated with severe morbidity and mortality but may not be apparent immediately post therapy. Recent studies have reported severe RPE in 0.3–7% of cases (7,8,10,25,30). Treatment of RPE consists of ventilatory support through intubation and initiation of ECMO. The use of steroids in the setting of RPE has yet to demonstrate significant benefit. Multiple methods have been utilized to reduce the risk of RPE. These include treatment limited to 1–2 pulmonary segments per session, multiple repeat angioplasty sessions, and conservative balloon sizing in the setting of severe stenoses, initial treatment sessions, and patients with poor cardiopulmonary reserve. Inami et al. have proposed the Pulmonary Edema Predictive Scoring Index (PEPSI) to utilize angiographic changes in blood flow from segmental BPA and baseline PVR to calculate risk of clinically significant RPE (31).

BPA is a promising technique for the treatment of patients with CTEPH. Meticulous disease evaluation, imaging assessment, procedural technique, and complication management is critical for good outcomes. Referral to a CTEPH center of excellence with a multidisciplinary team is important to avoid complications for these complex patients. Prospective and long-term survival studies are needed to further elucidate the role of BPA in the treatment of patients with CTEPH.