In North America, the mortality of acute myocardial infarction (MI) continues to decrease (1). Several reasons explain this reduction like cardiovascular risk factor control, the prompt use of percutaneous coronary angioplasty, the use of drug eluting stents and the use of evidence-based medications in the primary and secondary prevention of major adverse cardiovascular events.

The aim of our study is to describe the recent MI mortality trends and evaluate if there are differences between ethnic groups and geographic regions among the Ecuadorians with acute MI.

Ecuador is a middle-income country in South America with a population of 16,642,120. There are four main geographical regions: the coast, the highlands, the amazon region, and the Galapagos Islands. The country has different ethnicities: Indigenous, mestizo (mixture of white and native American), Montubio (mixture of native American and black), Mulato (mixture of white and black), black or afro-descendant, and whites. From 2012 to 2016, an average of 10,144,394.6 lived in urban areas and 5,881,757.8 lived in rural areas.

We conducted a cross-sectional analysis of the National Institute of Statistics and Census (INEC) in Ecuador. The INEC is a national registry that collects hospital discharge and mortality data. These data are collected monthly as part of the required reporting system of disease incidence and death certificates generated by every healthcare institution in the country. We used the most recent data between 2012–2016 to extend the trend seen in previous publications (4) and assure we only included international classification of diseases (ICD) 10 codes. The study was exempt from institutional review board regulations because of the use of publicly available de-identified data.

We identified all deaths between 2012 and 2016 and classified them as being related to a MI or not. We defined MI as having an ICD-10 code (code I21.x) and included both ST segment elevation MI and non-ST segment elevation MI. We also included them if they had complete demographic data. The positive predictive value of the ICD-10 for MI had been reported as ranging between 92–100% (8). The INEC collects mortality from death certificates. All death certificates are collected centrally by the national identification office (Registro civil) and reported to the INEC monthly.

We used demographic data from the INEC database. The source of demographic information comes from the national identification office as part of the ID card generation process.

The demographic data also included a measure of health literacy defined as self-report of being able to read and, area of residency classified as urban or rural and region of the country classified as coast, highlands, islands or the Amazonic region.

We linked the INEC data with the general census. To describe the general population, we collected data from the Census of Population and Housing 2010 Poblacion (9) and applied the same percentage values to the population projections generated yearly by the INEC for each one of the 24 provinces that Ecuador is divided into (10).

We calculated the crude MI mortality rate diving the number of MI deaths per year by the population in that given year and multiplying the result by 100,000. We also calculated the standardized age and sex mortality rate and its corresponding 95% confidence interval (CI). Because the values were similar we used the former. We used the Cochran-Armitage test to calculate the P value for trend and determine if changes in MI mortality occurred over time. 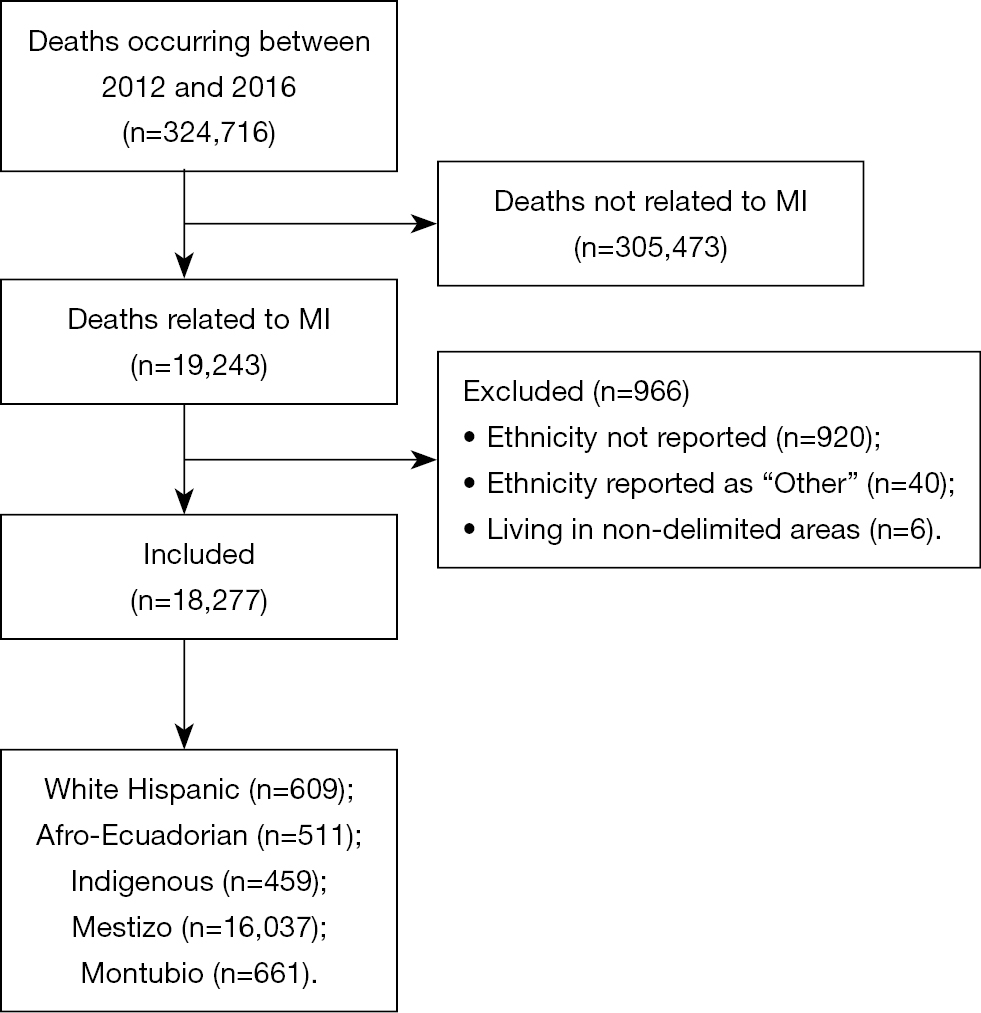 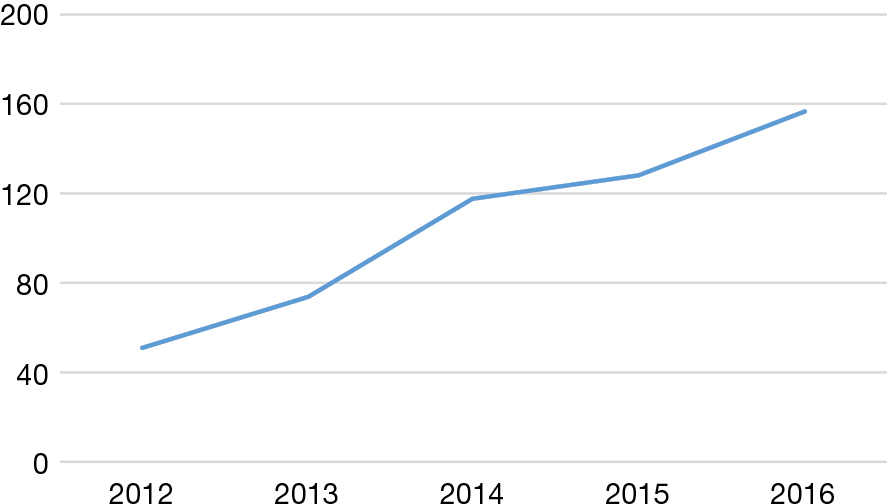 Table 3 and Figure 3 show the MI death rates by racial group. The majority of the deaths occurred in the mixed-race group. Those with mixed race were more likely to live in the coast (66%) and less likely to live in urban areas (82%). The MI mortality rates were higher among mestizos with a mean annual increase of 7.77 per year as opposed to other ethnicities where the mean annual rate increase was 5.04 in Montubios, 2.49 in white, 1.34 in Afro-Ecuadorians and 0.38 in indigenous.

Table 3 Characteristics of 18,277 deaths due to MI by race
Full table 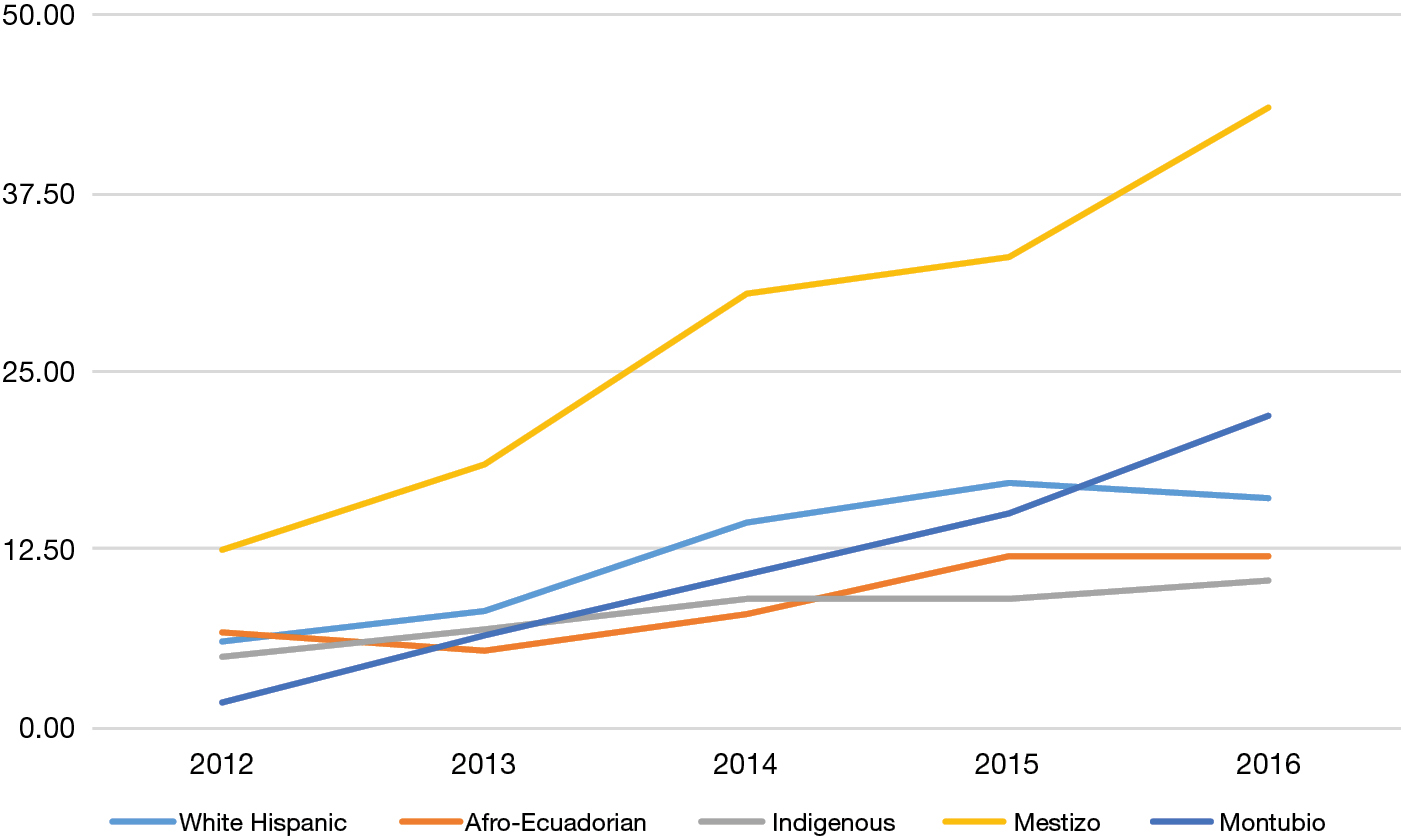 Table 4 and Figure 4 show the mortality rate by geographic region. The MI mortality rates throughout the investigated period were higher in the coast region with a mean annual increase of 10.29 per year as opposed to other geographic regions where the mean annual rate increase was 2.68 in the highlands, 0.40 in the Amazonic region and 6.63 in the Galapagos Islands. When we stratified the coastal provinces those in the middle of the country and with higher populations had higher MI rates (Guayas, Manabi, Los Rios and Santa Elena) when compared to those in the periphery (Esmeraldas and El Oro). The number of MI discharges from the health care facilities also increased from 14 to 23 per 100,000 and this increase was not seen in other provinces.

Table 4 Characteristics of 18,277 deaths due to MI by geographic region
Full table

Our study found that the MI mortality rates are increasing in Ecuador, a middle-income country, and that this increase is more pronounced in the coastal region of the country. We also found that increasing age, being male, being of mixed race and living on an urban area were associated with a larger increase in mortality over time. This increase was driven mainly by geographic differences. The strengths of this study are the use of national data government sponsored data, the use of the most 5-year recent data and the small amount of missing data.

Our study has several limitations that deserve mention. First, we used an administrative data that could lead to information bias, this is particularly relevant for the validity of the cause of death. However, the covariates are subject to less information bias since this data is linked to the national ID service which assures its validity. Second, because we relied on the census, we used population projections as denominators instead of official general population numbers, which may not be an accurate representation of the population growth between 2012 and 2016. However, this is a valid method of estimating census-based projections (12). Third, despite the improvement and standardization of formularies, non-transmittable diseases may be underreported in the rural setting.

North America has seen a clear decreasing trend in coronary artery disease mortality rate over the last decade. Pagan et al. found that the trends for Latin American countries have been more heterogeneous, however with the exception of Uruguay and Puerto Rico that experienced increase in 2011, most countries had declining or flat rates after the year 2000 (4). Of all the countries analyzed, Ecuador had the lowest mortality rate for CHD in the period of 2011–2013 (19.6/100,000 in men and 10.4/100,000 in women). Our study which aimed at evaluating the presence of disparities in CHD mortality rate within Ecuador, extends the evaluation period of the Pagan et al. study and documents a significant increase in MI mortality in the 2012–2016 period.

Potential explanations for this sharp change could be related to changes in access to health care, changes in the use of evidence-based therapies, changes in the prevalence of cardiovascular risk factors or migratory related changes in the population. Other potential explanations include changes in gross domestic product leading to lower health funding and a decrease in the availability of specialized medications. Others have found that changes in socio-political factors are related to increased cardiovascular mortality. Our study could not evaluate this causes for the increasing MI rates. However, clues are that most of the increase was explained by the differential increase in the coastal areas and among Ecuadorians of mixed race. An additional finding of interest is that the second highest mortality rate occurred in the Galapagos islands.

In our study, the majority of the deaths occurred in the coast or the highlands. Besides having densely populated areas, we found that the mean age of death for MI in these two regions is considerably higher than in lower populated regions. This higher prevalence could be related to subsequent survival, which may lead to an increased prevalence of chronic diseases (of later onset) such as diabetes and hypertension that also contribute to the development MI.

The majority of deaths occurred in the mixed-race group. However, this is the largest population of the country. Being a minority was a clear predictor of the increase in MI mortality. A potential explanation for this are social determinants of health. Social determinants have been associated with poor outcomes in south America (13-15) and this might play a more important factor in South America were resources are not ample.

On the other hand, Indigenous Ecuadorians are another minority that faces socioeconomic difficulties (considering their low literacy levels). Despite this, the mean age of death secondary to MI is high in relation to other ethnic groups. We attribute this to a lesser exposure to an urban lifestyle. Their diet which is rich in cereals and vegetables has not shifted to the high fat/calorie intake seen in the urban setting. Also, the diminished access to public transportation, and technology such as washing machines, heaters, etc. makes them walk miles in order to wash their clothes in rivers, collect wood for heat, work the land and harvest their own products; leading to an increased daily physical activity, preventing the physiopathologic processes that lead to diabetes, atherosclerosis and MI. Studies in other native American descendant communities have evidenced and increased prevalence of metabolic syndrome and other non-transmittable diseases after migrating to developed countries.

From the same perspective, the rapid increasing MI mortality rates seen in mestizos may be attributable to an urban lifestyle in combination with the previously described increase in the survival from early onset conditions (mainly infectious).

In conclusion, lower rates seen in less populated regions (Amazonic and Galapagos islands) may mask the high prevalence of infectious diseases as cause of death. Addressing other causes of death may increase the mean age of death seen in this region. The rapid MI mortality rate increase seen in highly populated regions, mainly in mestizos should be addressed by fomenting preventive measures such as an adequate diet and moderate to high levels of physical activity. Finally granting easier access to medical treatment for minorities such as Afro-Ecuadorians may increase mean age MI mortality presentation.