More than 17,000 deaths each year can be attributed to aortic valve disease (1). The mortality of patients with symptomatic severe aortic stenosis (AS) is as high as 50% at 1 year (2). European heritage and chronic kidney disease (CKD) are associated with an increased risk of developing calcific AS (3-5). The higher prevalence of AS in those of European ancestry has been supported by limited genetic analysis with abundant data demonstrating a higher prevalence of AS in white adults, as well as increased AS-associated interventions in whites compared to black patients (5-7). Renal dysfunction has been hypothesized to promote aortic valve calcification leading to AS by inducing high rates of inflammation, oxidative stress, and derangements in calcium and phosphorus homeostasis (8). However, it is unknown if this association between CKD and AS blunts the strong relationship between race and calcification of the aortic valve. The aim of our study is to compare the progression of AS between whites and black patients in a CKD specific population and investigate if the genetic link between white adults and AS progression prevails even in a CKD population.

Ultrasound studies were performed in the UNC Hospitals Echocardiography Laboratory by trained sonographers using Philips Sonos 5500 and IE33 imaging platforms (Philips, Andover, MA, USA). A standardized, comprehensive imaging protocol that included detailed assessments of valvular and ventricular function was employed. Specifically, pulsed wave and continuous wave Doppler profiles of flow in the left ventricular outflow tract and through the aortic valve were acquired, allowing calculation of the peak transvalvular velocity, the estimated mean transvalvular gradient, and estimated AVA by the continuity equation. With few exceptions, all echocardiograms were read by the same faculty echocardiography reader, which provided consistency among interpretations.

All echocardiographic data was obtained through chart abstraction. Serial TTEs extrapolated over a 10-year period were used to determine yearly rates of changes of three echocardiographic indices of AS severity, including mean transvalvular gradient, estimated AVA, and peak transvalvular velocity. Mean gradient and transvalvular velocity measures were excluded if the patient’s ejection fraction was <50% (n=20). All demographic and laboratory data were obtained at the patient’s first visit to the cardio-renal clinic. Patients were followed from 2006 until March 2016. IRB approval was obtained through the University of North Carolina system and informed consent was appropriately obtained prior to study involvement.

Patient demographics and AS measurements (mean transvalvular gradient, estimated AVA, and peak transvalvular velocity) at the first visit were described using frequency s and univariate analyses. If a patient’s ejection fraction was <50%, their estimated mean gradient and aortic valve velocity values were excluded, but AVA was included in the analysis. Differences in demographics between patients were assessed using Fisher’s exact and Wilcoxon-Mann-Whitney tests, where appropriate. A P value <0.05 was considered statistically significant.

A mixed effect linear model with repeated measures was used to estimate the average yearly rate of progression for the cohort. An unstructured correlation matrix was used to estimate the random effects of individual intercept and slope. For slope estimates, a positive value indicates an increase in measurement values over time and a negative value indicates a decrease. Multivariable mixed effect linear models, adjusting for age, sex, smoking status, dialysis, and baseline total cholesterols, were also performed. Age and total cholesterol were modeled as restricted quadratic splines.

Of the 1,283 patients from the cardiorenal clinic database, 148 individuals (93 black, 47 white, and 8 other race patients) met the inclusion criteria of having at least mild AS or a peak aortic transvalvular velocity of at least 2 m/sec at any point during their follow-up trajectory, and at least one echocardiogram available for interpretation. This resulted in 408 eligible TTEs during the study period. The median number of visits was 2 (IQR, 1–4) and 101 patients (68%) had at least 2 TTEs during the study period. Median time between eligible TTEs was 362 (IQR, 157–539) days among white patients and 434 (IQR, 250–616) days for black patients, P=0.03. However, the median number of TTEs were the same between both groups (median 2, IQR, 1–4), P=0.83. The study population was predominantly male (54%), black (66%), and had a median age of 58 (IQR, 51–64) years with 79% on either hemodialysis or peritoneal dialysis (Table 1). Diabetics comprised 56% of the population, 100% were hypertensive, and 20% had either mild or moderate AS at baseline. In addition, 28 patients had renal transplantation during the study period. At the initial visit, the average mean transvalvular gradient was 9 (IQR, 6–12) mmHg, the average estimated AVA was 1.8 (IQR, 1.4–2.1) cm2, and the average transvalvular velocity was 2.0 (IQR, 1.8–2.3) m/s. 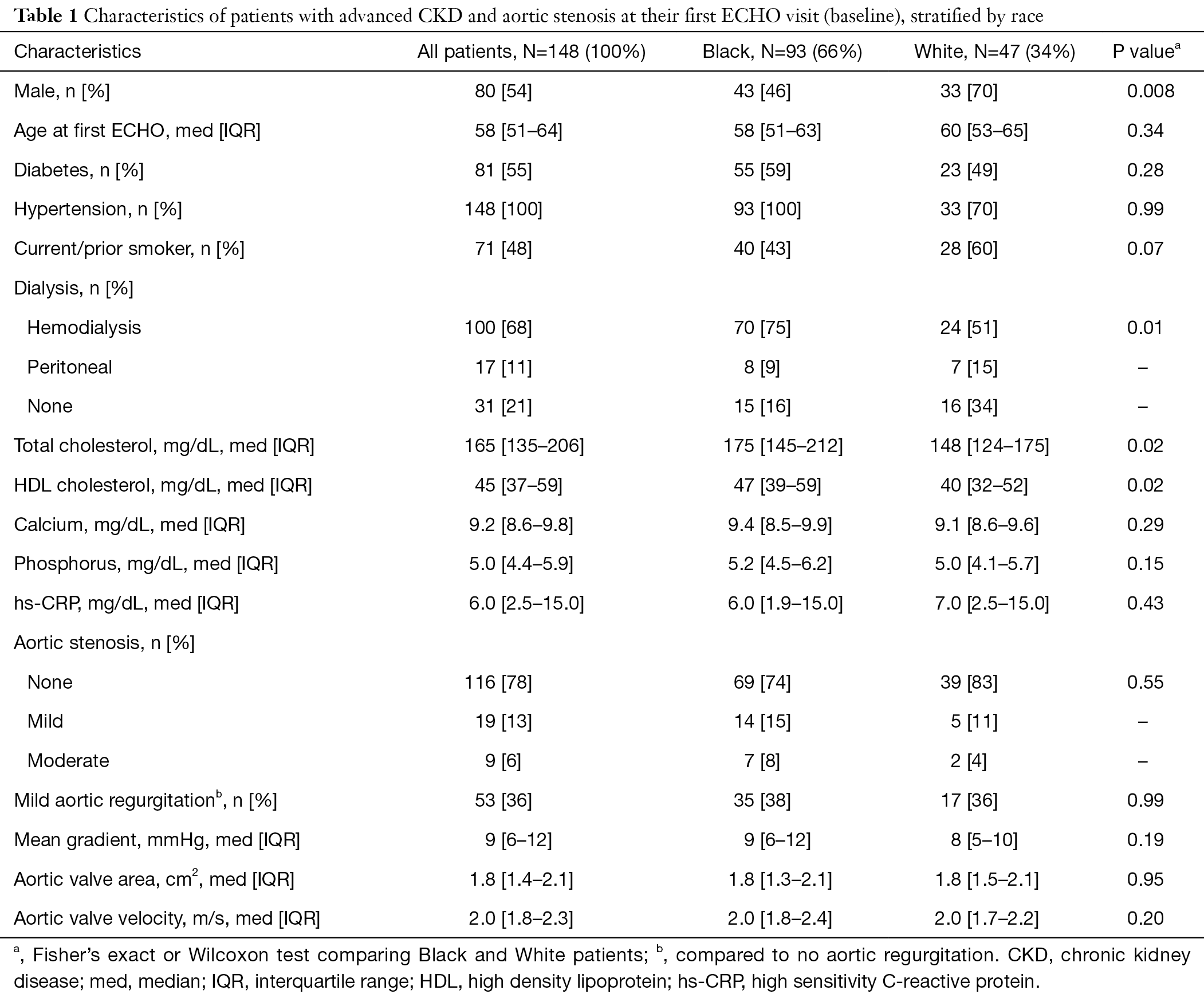 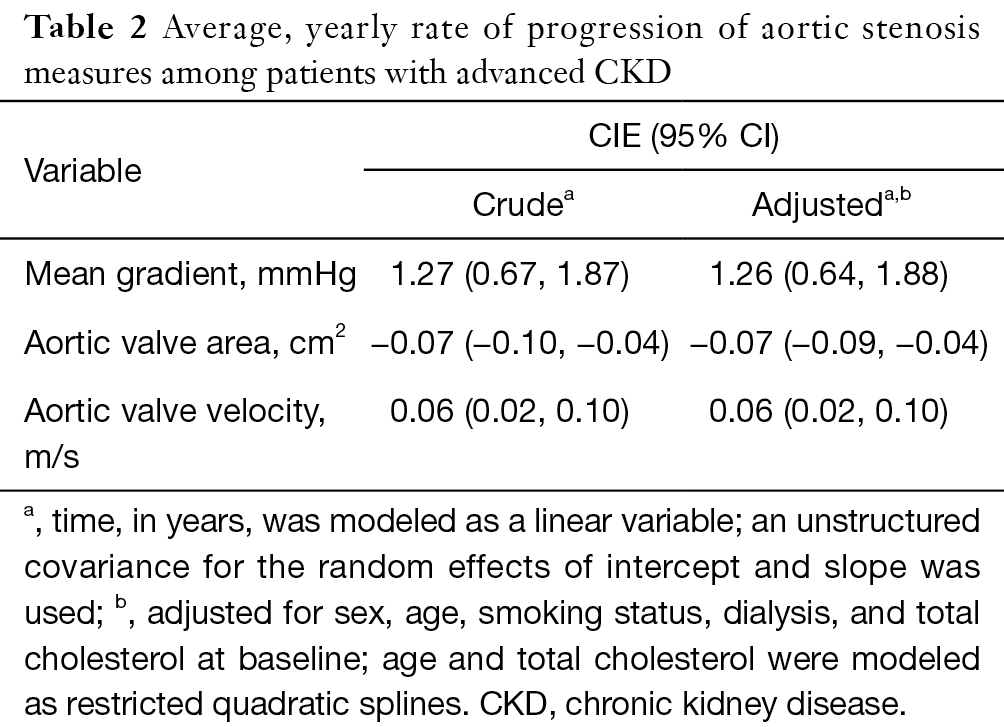 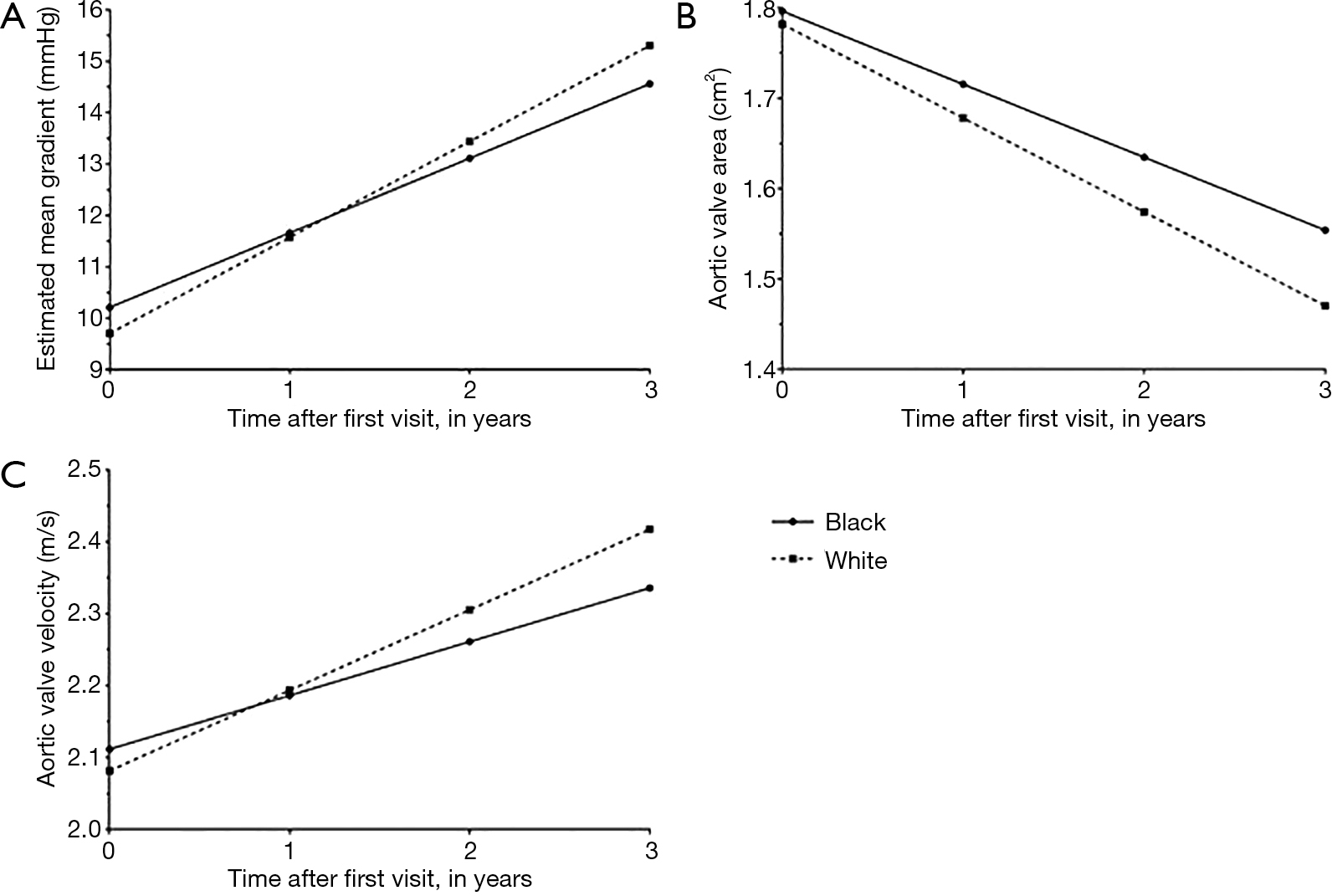 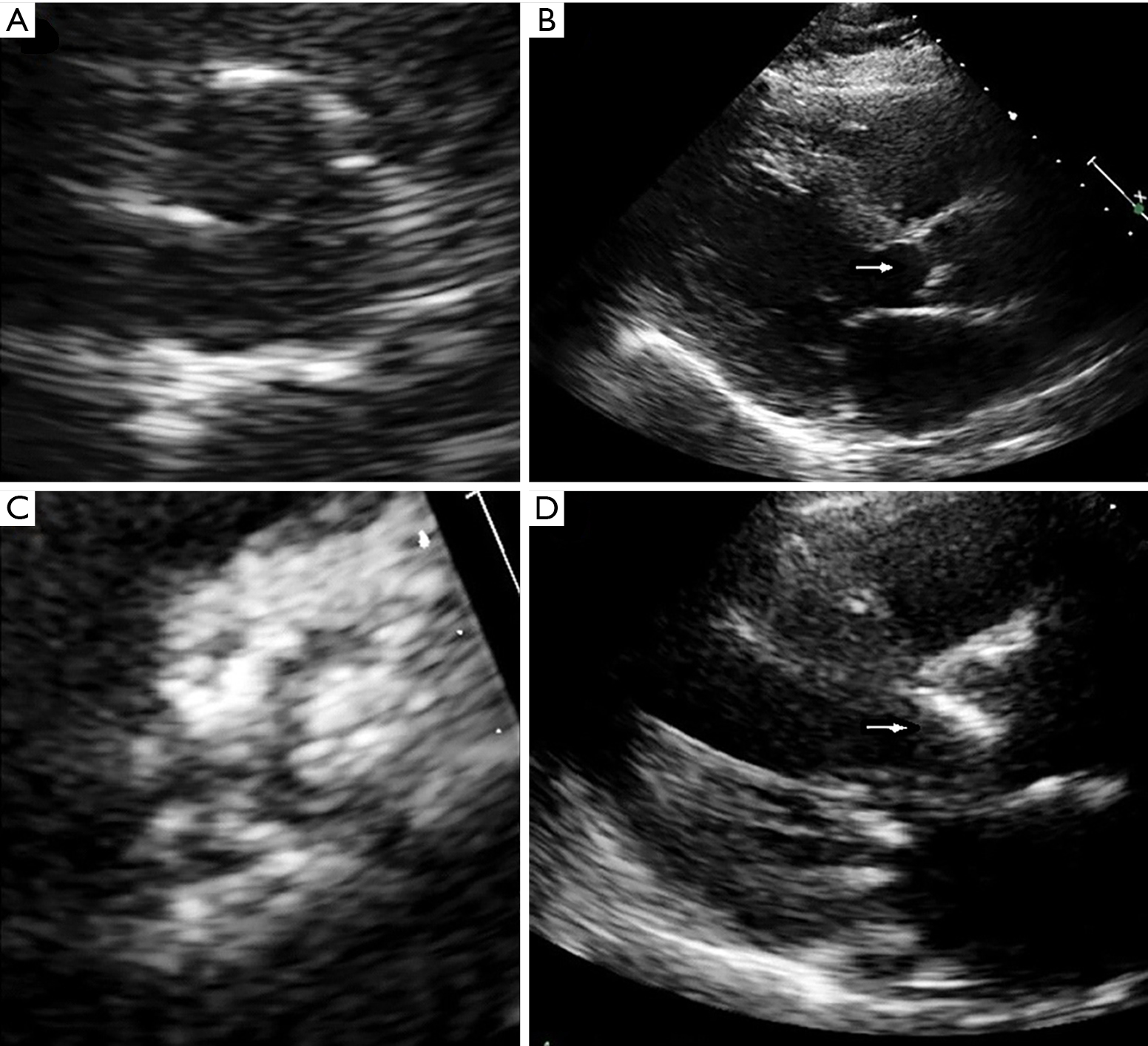 In this population of 148 advanced CKD patients being evaluated for kidney transplantation, black patients were more likely to be female and on dialysis. Despite this, AS appears to have progressed more rapidly in white patients compared to black patients across all three AS indices. The rate of progression was at least two-fold higher in the white population for each index, despite a higher prevalence of dialysis in the black patients in our cohort. To our knowledge, our study is the first to compare AS progression by race in an advanced CKD population.

In this study on an advanced CKD population being evaluated for renal transplantation, we found black adults to more likely be on dialysis as compared to whites. The race-relationship is well supported in literature, as black patients are almost twice as likely to develop end-stage renal disease than whites after adjusting for common comorbidities and socioeconomic status (9,10). This relationship holds true despite a similar prevalence of kidney disease at earlier CKD stages, suggesting a more rapid rate of kidney function decline in black patients compared to whites (11,12).

Despite a lower proportion of white patients being on dialysis, we found a significantly faster rate of AS progression in that group as compared to black patients. This potentially indicates a stronger role for genetic predisposition in AS progression as compared to advanced CKD. The fact that CKD accelerates AS progression has been previously demonstrated. Kim et al. showed that mild to moderate AS progressed faster in a population of end-stage renal disease patients compared to age and gender matched controls due to a higher hemodynamic and metabolic burden on the aortic valve (13). The higher metabolic burden leading to faster AS progression was also shown in a study by Kume et al., who found that greater calcification of the aortic valve in dialysis patients led to worsened AS more quickly (14). CKD is a risk factor for worsened AS severity even in pre stage 5 CKD populations, suggesting that even a moderate loss of kidney function results in worsening AS (15). This suggests that even in light of the metabolic and hemodynamic derangements present with advanced CKD, genetic predispositions still predominate AS progression.

The relationship between European ancestry and AS progression may be due to single nucleotide polymorphisms associated with aortic valve calcification. Thanassoulis and colleagues were able to demonstrate a strong association between the lipoprotein (a) (LPA) locus and the presence of aortic valve calcification in patients of European descent (5). Although this association was only based on valve calcification, it may be reasonable to extrapolate this association between LPA AS and AS progression as well. Ellis et al. located another 3 single nucleotide polymorphisms associated with AS in patients older than 60 who were >98% Caucasian (16). A further understanding of the genetics underlying race differences in valvular disease is necessary to make definitive conclusions.

This study is not without limitations. First, this is a single center study with a modest sample size. However, our results are indicative of the fact that meaningful differences in AS progression between white and black patients may exist. Second, the relatively young age of our cohort almost certainly contributed to slower rates of AS progression than that of the general population. This is particularly important as the severity of valvular stenosis is known to increase considerably with age, especially after 75 years (19). Additionally, our population at baseline largely had mild AS as opposed to moderate or severe, possibly reducing the rate of progression. Lastly, we understand that the pre-transplant evaluation is rigorous and likely excludes otherwise sicker patients in the general CKD population. This is in conjunction with the fact that mineral bone disorder is likely managed differently in pre-transplant patients.

In this study investigating 148 advanced CKD patients who underwent serial echocardiography over a 10-year period, AS appears to progress at a faster pace in white patients compared to black patients in each of the three AS indices (mean gradient, AVA, transvalvular velocity). These results suggest that the genetic predisposition for AS may be a strong risk factor for AS progression. Additional research is required to confirm the results of our study.

Ethical Statement: IRB approval was obtained through the University of North Carolina system and informed consent was appropriately obtained prior to study involvement. The authors are accountable for all aspects of the work in ensuring that questions related to the accuracy or integrity of any part of the work are appropriately investigated and resolved.