Cardiovascular diseases, including acute coronary syndromes (ACS), have been the leading cause of morbidity and mortality worldwide. The major pathological process underlying these cardiovascular events is the atherosclerosis, a chronic inflammatory and immune disease occurring in response to the injury in blood vessel wall (1,2). Atherosclerotic plaques contain macrophage-derived foam cells in which macrophages interact with T-cells to produce a wide array of cytokines exerting both pro- and anti-inflammatory effects (1,3,4). Circulating oxidized low-density lipoprotein (Ox-LDL) antibody is almost detectable in all the patients with atherosclerosis, and the concentration of Ox-LDL antibody seems to be associated with the onset of clinical disease. Numerous studies have investigated the association between circulating Ox-LDL antibody and cardiovascular disease, but there is still controversy on this issue. Some studies show a positive correlation between circulating Ox-LDL antibody and atherosclerotic diseases, whereas others reveal a negative relationship (5-11). The reasons for this discrepancy are still unknown, and some investigators ascribe it to the difference in the standardization of LDL antigens used for the testing of Ox-LDL antibody, which may be altered on account of oxidation ex vivo (7). A resolution to this issue is the detection of antibody against specific native or MDA-modified ApoB100 peptide (12,13). ApoB100 is the only component permanently associated with the LDL formation in the body. Its peptide fragments generated by the proteolytic degradation and aldehyde-modification are the major antigens in Ox-LDL (14). These antigens have the unique amino acid sequence indicating their specificity. The mature ApoB100 protein is composed of 4,563 amino acids in a single polypeptide and carries many human leukocyte antigen (HLA)-restricted epitopes (14).

In the present study, recombinant anti-Ox-LDL antibody to a sequence (Ag1 H-DRFKPIRTGISPLALIKGMTRPLSTLIS-OH 213–240) (14) of Ox-LDL was generated and whether this antibody was able to prevent the THP1-derived macrophages from apoptosis was further investigated. In addition, the role of NF-kB pathway in this effect was further explored.

Peptide Ag1 (H-DRFKPIRTGISPLALIKGMTRPLSTLIS-OH 213–240) (14) of Ox-LDL was chosen as an antigen, and Ox-LDL antibodies were immune synthesized to Ag1.

Human macrophage line THP1 cells were maintained in HyClone-1640 (Gibco Co., USA) supplemented with 10% fetal bovine serum (FBS), 1% penicillin, and 1% streptomycin. In this study, THP1 cells were induced into macrophages with 160 µg/mL phorbol myristate acetate (PMA). Then, cells were divided into control group, Ox-LDL group and antibody group, cells in which were treated with phosphate buffered saline (PBS), Ox-LDL (50 mg/L) and anti-Ox-LDL (100 µg/L) plus Ox-LDL (50 mg/L), respectively for 24 h in an incubator with 5% CO2 at 37 °C.

Briefly, primary THP1 cells were grown in 6-well plates. After different treatments for 24 h, cells were observed under an invert microscope, and the viable cells were analyzed in different groups with Pro-plus 6 software (Media Cybernetics, USA) and GraphPad Prism version 5.0. At least 1,000,000 THP1 cells were analyzed for each experiment. And each experiment was replicated three times to get the mean cell viability. The specificity of each group was illustrated in Figure 1. 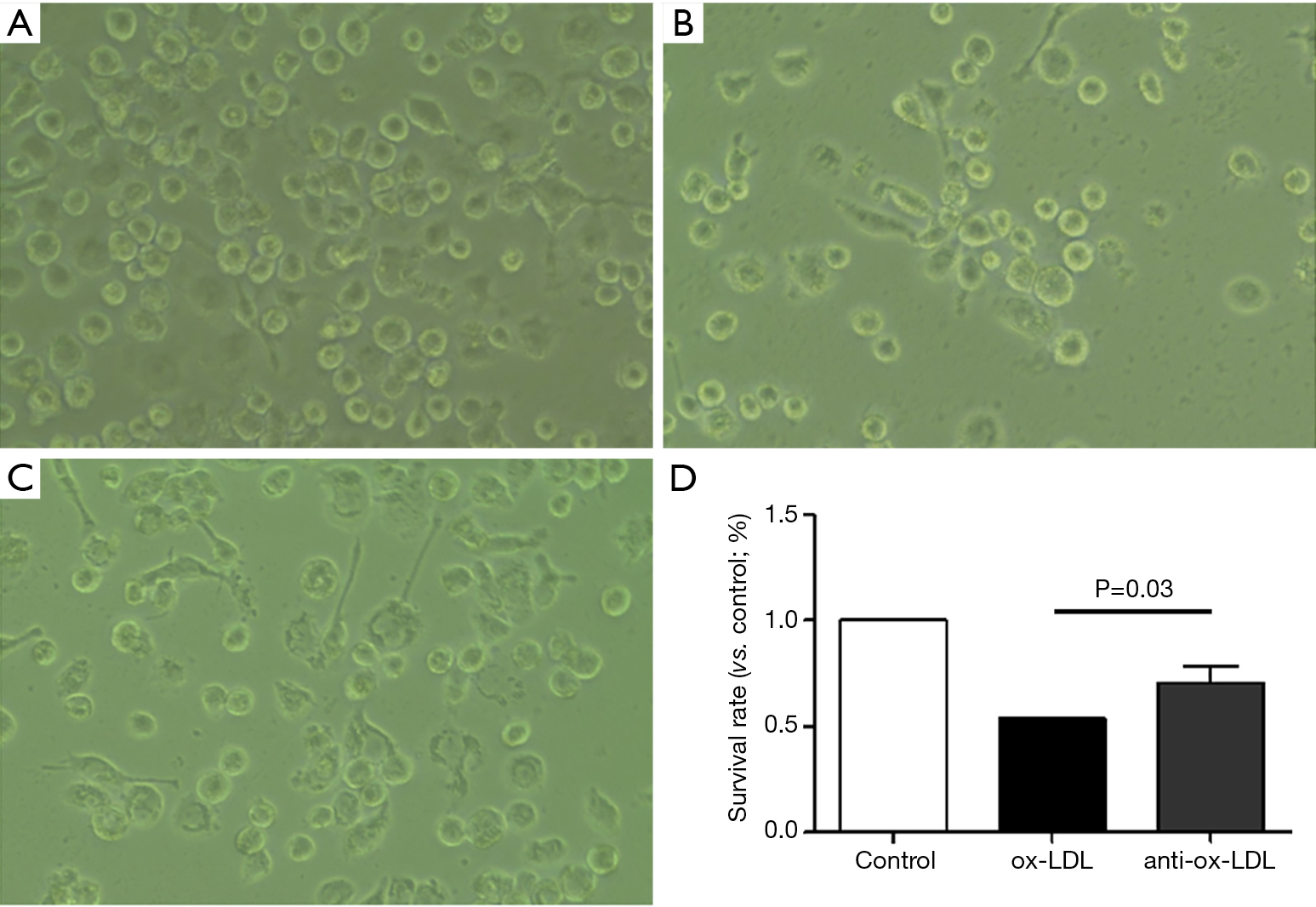 Apoptosis rate was determined by flow cytometry using the Annexin V-FITC Apoptosis Detection Kit (eBioscience, USA) according to the manufacturer’s instructions. After different treatments, cells were trypsinized, harvested, washed twice with cold PBS and centrifuged at 1,000 g for 5 min. Cells were re-suspended in 195 µL of binding buffer at a density of 1,000 cells per µL. Then, 5 µL of Annexin V-FITC was added. Cells were gently vortexed and incubated for 10 min in dark at room temperature. After the cells were centrifuged at 1,000 g for 5 min, 190 µL of binding buffer and 5 µL of PI were added. Samples were kept on ice and then subjected to flow cytometry (Beckman Coulter, Miami, FL, USA). Normal cells were negative for both Annexin V-FITC and PI; early apoptotic cells were positive for Annexin V-FITC, but negative for PI negative; late apoptotic cells were positive for both Annexin V-FITC and PI. Apoptosis was also quantified by measuring caspase-3 activity using the Caspase-Glo 3/7 Assay kit with a microplate reader (BioTek, Winooski, VT, USA). The optical density detected is directly proportional to the caspase-3 activity (15). At least 10,000 THP1 cells were analyzed for this flow cytometric evaluation each experiment. And each experiment was replicated three times to get the mean apoptotic rate. The signification was shown in Figure 2. 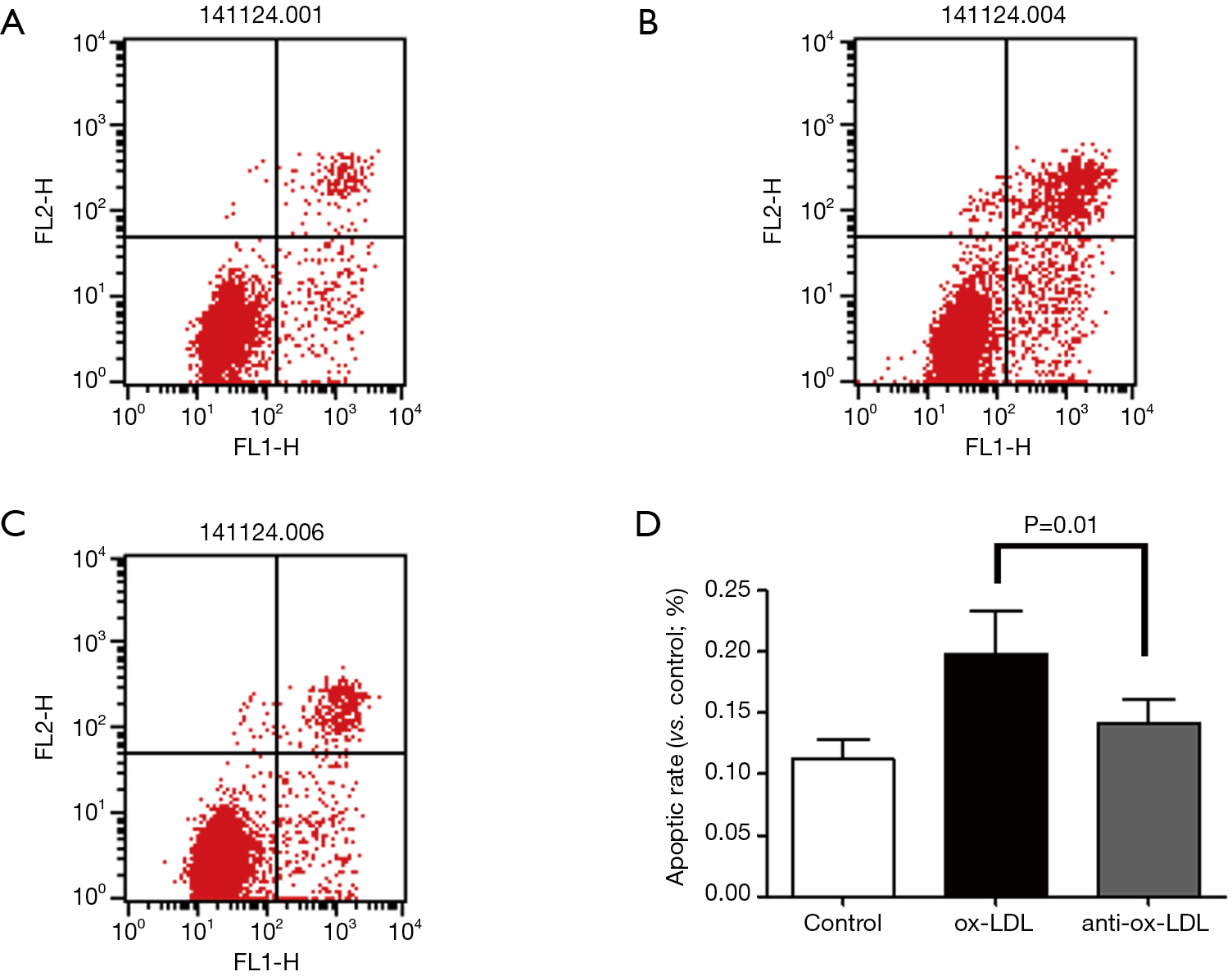 Thirty-microgram of protein was loaded in each lane and separated by 10% SDS-PAGE. Mouse anti-NF-κB (P65) antibody (CST), anti-caspase-3 antibody was (1:1,000), anti-β-actin antibody (Sigma Aldrich; 1:3,000), anti-mouse secondary antibody (Thermo Scientific) conjugated to horseradish peroxidase (HRP) (1:3,000) were used in the Western blotting. The blots were developed with the Bio-Rad (USA) and exposed with Clear Blue X-ray film (Pierce). The density of each band was quantified and normalized to beta-actin by Image lab (Syngene, Cambridge, England). The bound antibodies were detected by ECL reagent (Gene Tex, USA) according to the manufacturer’s instruction. The expression of the protein, P65/caspase-3/BCL2 and β-actin was detected at least three times by Western blot, and the mean protein expression of each group was figured out. The signification was shown in Figure 3.

Total RNA was extracted using Trizol reagent (Invitrogen, USA). RNA was transcribed into cDNA with the reverse transcription kit (TaKaRa, Dalian, China) as the template. The house-keeping gene glyceraldehydes-3-phosphate dehydrogenase (GAPDH) was used as an internal control. The following primers were designed according to the corresponding sequences obtained from GenBank: P65-3-F: 5'-CTGGTCCTGTGAAGCCTACA-3', P65-3-R: 5'-ATCCACCTCTTCACCAACGT -3'; caspase-3-F: 5'-GGTAT-CCATGGAGAACACT-3', caspase-3-R: 5'-AAAAATAGAGTTCTTTTGTGAG-3'; BCL2-F: 5'-CCGTTGCTTTTCCTCTGGG-3', BCL2-R: 5'-CTGGGAGGAGAAGATGCCC-3'; GAPDH-F: 5'-ACC-ACAGTCCATGCCATCAC-3', GAPDH-R: 5'-TCCA-CCACCCTGTTGCTGTA-3'. The following reaction systems included 4 µL of 5× SYBR Green universal type qPCR Master Mix (TaKaRa, Dalian, China), 0.6 µL of primers and 1 µL of cDNA. The total reaction volume was 20 µL. The reaction mixture was centrifuged at 1,500 rpm/min, and PCR was conducted according to the following conditions: pre-degeneration at 95 °C for 30 s; degeneration at 95 °C for 3 min; annealing extension at 60 °C for 30 s; The melt curve was delineated. Finally, the data was read directly from the real-time PCR instrument (Bio-Rad, USA) (16). The expression of the mRNA of the P65/caspase-3/BCL2 and GAPDH was checked more than three times by PCR, and then the mean expression result of each group was figured out. The specificity of each group was illustrated in Figure 4. 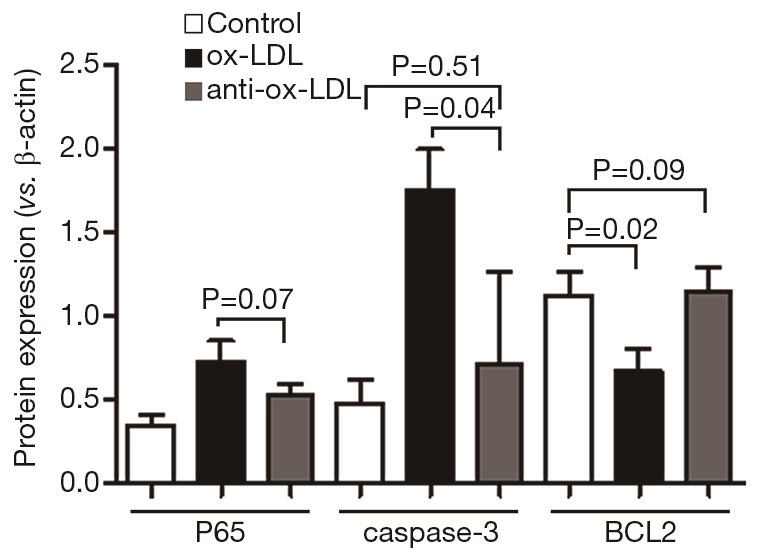 Figure 4 mRNA expression of P65, caspase-3 and BCL2 in macrophages after different treatment (RT-PCR). Protein expression of P65, caspase-3 and BCL2 was normalized to that of β-actin. anti-Ox-LDL inhibited caspase-3 expression, but increased BCL2 expression (P<0.05) when compared with Ox-LDL group, while, the P65 mRNA expression was comparable to that in Ox-LDL group. Data were from at least three experiments and analyzed with GraphPad Prism version 5.0. Ox-LDL, oxidized low-density lipoprotein; RT-PCR, reverse transcription polymerase chain reaction.

Data are reported as mean ± standard deviation (SD). Comparisons were done with Student t-test for two groups and with one-way analysis of variance among groups. Statistical analysis was performed with GraphPad Prism version 5.0. A value of P<0.05 was considered statistically significant.

Cells were observed under an invert microscope and the survival rate was determined in three groups. As shown in Figure 1, the survival rate in anti-Ox-LDL group (C) was significantly higher than in Ox-LDL group (B) (P<0.05), but comparable to that in control group (A), suggesting that the Ox-LDL antibody protects cells from apoptosis, and Ox-LDL may induce and/or accelerated cell apoptosis.

Annexin V-FITC was used to detect cells in early apoptosis, and PI-PE to detect those in late apoptosis or necrotic cells. As shown in Figure 2, the apoptosis rate in anti-Ox-LDL antibody group (C) significantly decreased as compared to Ox-LDL group (B) and control group (A) (P<0.05).

Ox-LDL is thought to be has been found as a key player in the immune response to atherosclerosis (1,2). Experimental studies have revealed indicate that anti-Ox-LDL antibodies are is closely associated with atherosclerosis (3,5,17), and epitopes that can induce the have also identified atheroprotective immune responses against have been identified epitopes in Ox-LDL (18).

Invert microscopy and flow cytometry (FCM) were employed to detect the apoptosis rates after different treatments. As shown in Figures 1 and 2, the apoptosis rate in Ox-LDL group increased as compared to control group (P<0.05), indicating that Ox-LDL induce the apoptosis of macrophages, which has been confirmed by many other studies. However, in the presence of anti-Ox-LDL, the apoptosis rate significantly reduced as compared to Ox-LDL group (P<0.05), indicating that anti-Ox-LDL is able to protect macrophages from apoptosis (18). On the available findings, we hypothesize that anti-Ox-LDL may inhibit NF-κB pathway, exerting protective effects on the apoptosis of macrophages (19). It is well known that NF-κB is an oncogenic protein that can regulate the transcription of a variety of cellular genes, including those involved in the immune response and inflammatory reaction (19). NF-κB localizes in the cytosol as a heterodimer composed of NF-κB1 (P50) and Rel (P65) subunits which are bound to an inhibitor protein, IκB. Studies (20-22) have shown NF-κB is related to the pathogenesis of atherosclerosis, including in fibroblasts, smooth muscle cells, and endothelial cells, be activated by Ox-LDL as a mechanism for initiating atherosclerosis. Hernandez-Presa et al. (21) found the NF-κB activation in early atherosclerotic lesions. Other studies also reveal a critical role of NF-κB activation in the apoptosis of myocytes and endothelial cells (23). In the present study, our results showed that Ox-LDL activated NF-κB in THP1 cells. These findings collectively indicate that NF-κB activation is an important signaling pathway involved in the effects of ox-LDL on THP1 cells.