Transcatheter mitral valve repair (TMVR) has emerged as a promising treatment option for symptomatic patients with chronic severe primary mitral regurgitation for patients at higher surgical risk (1,2). The MitraClip® device system is now approved for repair of both degenerative and functional MR in US and has been proven to be effective in reducing MR, symptoms of heart failure, and left ventricular remodeling (3,4).

Atrial fibrillation (AF) significantly increases the risk of cardioembolic events and heart failure (5). It has been categorized as paroxysmal (returns to sinus rhythm within 7 days), non-paroxysmal (returns to sinus rhythm after 7 days), or permanent (does not return to sinus rhythm) (6). Almost half of the patients with degenerative MR have AF at 10 years (7). Patients with degenerative MR and AF had higher risks of stroke, bleeding, death and HF hospitalizations, after TMVR. Previous studies have shown that non-paroxysmal AF is associated with higher rate of stroke and mortality when compared to paroxysmal AF (8). Whether any difference exists in the impact of paroxysmal versus non-paroxysmal AF on post-TMVR outcomes remains a subject of interest. Our goal is to explore this impact based on 2016 Nationwide Readmission Database (NRD) for patients undergoing transcatheter MV repair.

To ensure complete 30-day follow-up for a calendar year, discharges were limited to January-November. Discharges in December were excluded. Further exclusion criteria included patients with ICD-10 procedure codes. For the readmission outcome, patients were excluded if index admission had missing length of stay (LOS) or the patient died or left the hospital against medical advice.

Statistical Analysis System (SAS) software 9.4 (TS1M5, SAS Institute Inc., Cary, North Carolina) was used for statistical analysis. Baseline characteristics were determined using SAS procedures designed to account for the complex sampling design of the NRD survey. Statistical analysis was appropriately weighted using the weights supplied by the NRD to produce nationally representative estimates. All analyses are performed on the weighted number of events in the cohort using complex survey procedures and domain analysis to ensure proper adjustment of standard errors. PROC SURVEYFREEQ, PROC SURVEYMEANS, and PROC SURVEYREG were used to determined baseline characteristics. Differences in baseline characteristics are evaluated using F-test results from a simple linear regression in PROC SURVEYREG for continuous variables (PROC SURVEYMEANS does not give P value of comparison groups, simple linear regression is an established workaround for this) and Rao Scott Chi-Square results from PROC SURVEYFREQ for categorical variables. Categorical variables are displayed as percent weighted visits with 95% confidence of these estimates. Continuous variables are displayed as median (interquartile range).

This study has been rendered exempt from ethics review. 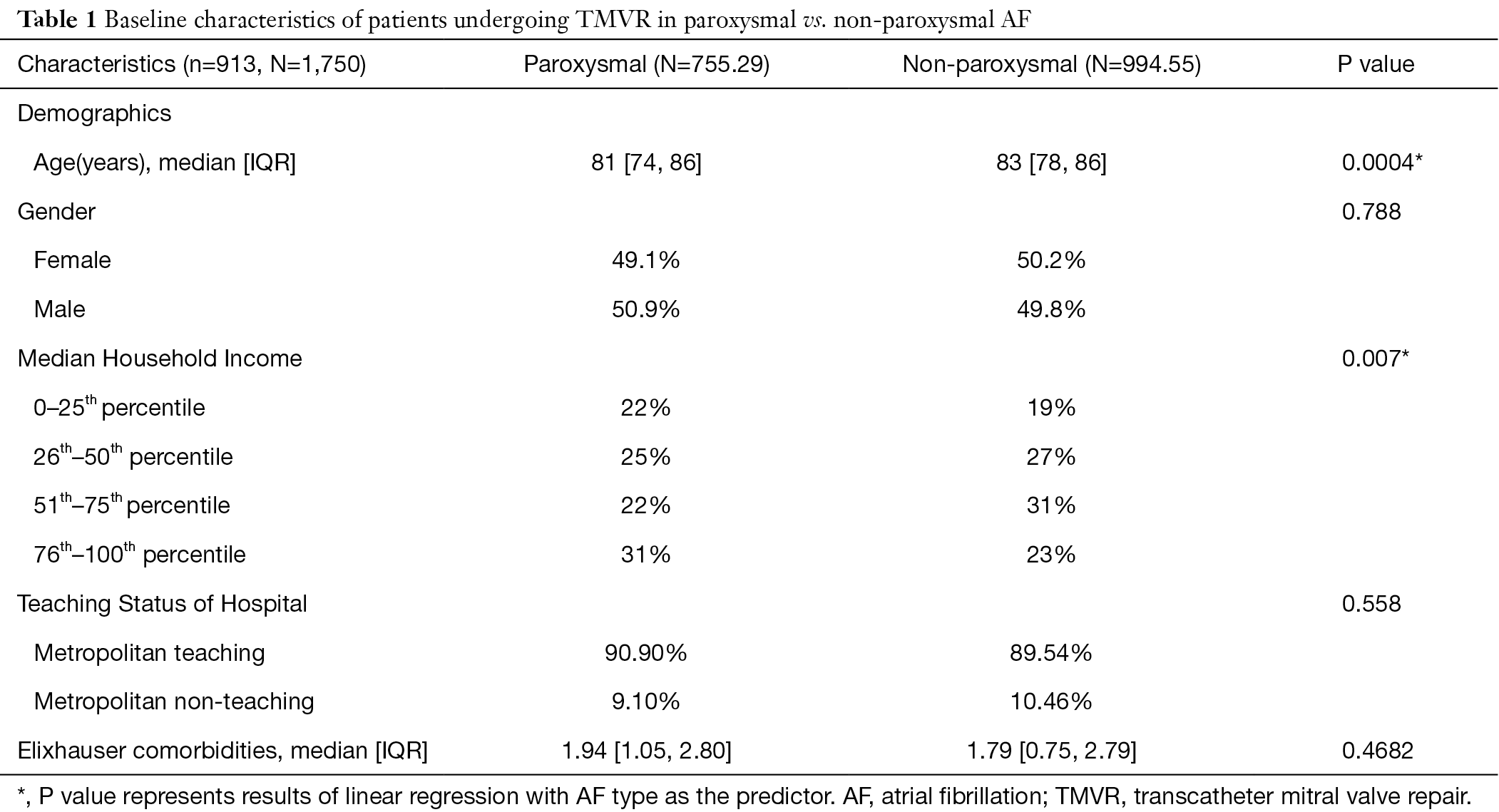 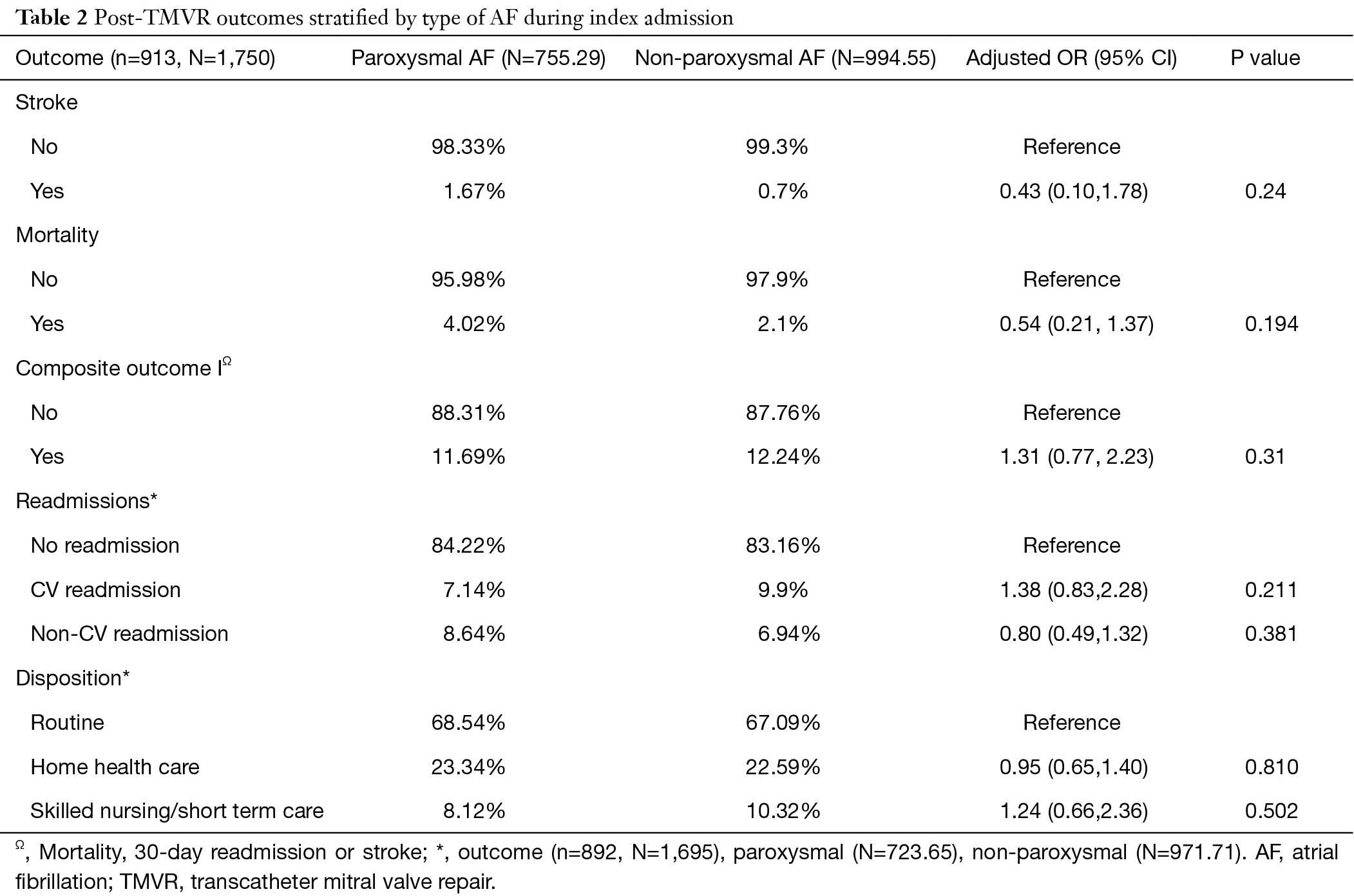 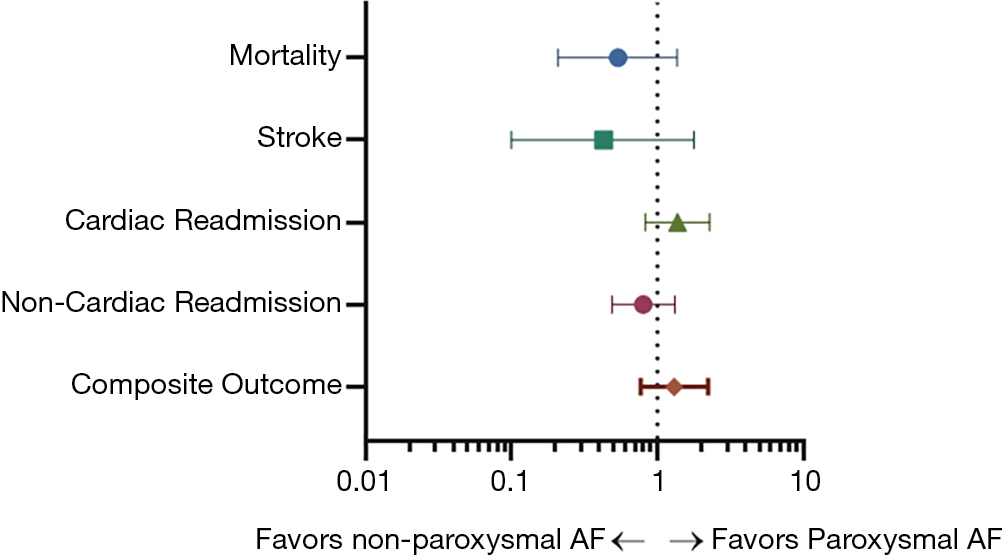 In this analysis from the 2016 Nationwide Readmission Database (NRD) investigating patients undergoing TMVR, we did not find significant differences in outcomes (death, stroke, discharge disposition or 30-day readmissions) between those with either paroxysmal or non-paroxysmal AF. Baseline characteristics between the two groups were largely similar except for the age; Non-paroxysmal AF patients were older when compared to paroxysmal AF.

The onset of AF in patients with chronic severe primary MR with normal left ventricular function is a class II indication of surgical MV repair (1). The association of AF with poor outcomes in those undergoing mitral valve repair, by surgical or transcatheter route has been shown before. The association of AF with worse survival in the patients with surgical MV repair has been previously reported (9,10). In a recent analysis from the TVT registry, AF was associated with a longer LOS, and worse outcomes at one year with respect to a composite outcome of death or HF hospitalization, stroke and bleeding (11).

Although studies have investigated the impact of AF on TMVR outcomes, data investigating the impact of type of AF on outcomes after TMVR remains sparse. In the analysis from the TVT registry, those with non-paroxysmal AF were associated with a higher 30-day mortality or HF hospitalization than paroxysmal AF (10) but these differences were attenuated at 1-year. In this study from NRD, we did not find any meaningful differences in outcomes by type of AF. Surprisingly, those with paroxysmal AF had twice the stroke rate as compared with those with non-paroxysmal AF. It is possible that those who had paroxysmal AF were less likely to be on long-term anticoagulation. Unfortunately, we were limited by unavailability of medication data to further investigate this potential association.

Our study has several limitations. First, we did not have information on echocardiographic characteristics of patients. A previous study found that the combined residual MR and elevated MV pressure gradients after TMVR was associated with poor prognosis independent of presence of AF (11). Secondly, we did not have access to the anticoagulation status of the patients. Cardiac death in mitral valve repair patients was found to be predominantly due to cardioembolic events in AF patients in a previous study (12). The baseline characteristics that confer a high surgical risk and qualify patient for TMVR, for example by STS score, would also confer a high CHADSVASC score (stroke risk), and a high HAS-BLED score (bleeding risk), which could make anticoagulation decisions similarly difficult in these patients regardless of type of AF; and we could not adjust for the anticoagulation status. Finally, coding errors in NRD could affect the classification of patients into the different types of AF.

In-hospital and readmission outcomes did not differ among patients by type of AF following transcatheter mitral valve repair. Further studies are needed to confirm these findings, especially with respect to anticoagulation status, echocardiographic findings, and baseline characteristics. More research is needed to better understand the prognostic impact of atrial fibrillation on long term outcomes after TMVR.

Ethical Statement: The authors are accountable for all aspects of the work in ensuring that questions related to the accuracy or integrity of any part of the work are appropriately investigated and resolved. This study has been rendered exempt from ethics review.