High-resolution imaging of the aorta is essential for preoperative planning and follow-up of patients with aortic disease (1). Today multidetector computed tomography (MDCT) is the gold standard to assess aortic pathologies before and after treatment because it has the advantages of high spatial resolution, short acquisition time and wide availability. On the downside, patients with aortic disease are often repeatedly exposed to a significant amount of ionizing radiation and nephrotoxic contrast agents with the risk to induce renal insufficiency, especially in this compromised patient group with a high incidence of coexistent cardiovascular and renovascular disease.

Consequently magnetic resonance imaging (MRI) is considered an alternative to MDCT prior and after aortic treatment (2-6). Advances in MRI imaging allow for acquisition of high-resolution ECG- and respiratory-triggered MRA datasets by use of the steady-state-free precession technique (SSFP) [further referred to as native magnetic resonance angiography (N-MRA)] without the need for intravenous contrast administration (Figure 1) (7-11).

Figure 1 Contrast-enhanced (CE-MRA) (A) and native magnetic resonance angiography (N-MRA) (B) as well as centerline length measurement based on a CE-MRA dataset (C).

In the last year, several studies investigated the value of N-MRA for imaging and diameter assessment of the thoracic aorta with accurate results compared to contrast-enhanced magnetic resonance angiography (CE-MRA) or MDCT datasets (5,7,9-13). However, diameters were always assessed manually giving way for high inter- and intraobserver variability. Lowest inter- and intraobserver variability is achieved if diameter and length are measured based on centerline analysis with automatic lumen segmentation on dedicated post-processing workstations (14,15).

However, lower signal-to-noise-ratio and therefore lower intraluminal contrast in N-MRA datasets challenge the segmentation process of commercial algorithms. To overcome this problem and to exactly compare differences between N-MRA and CE-MRA exams we introduce an in-house 3D model-based segmentation approach (16). To our knowledge there is no study comparing both sequences by automatic 3D lumen segmentation, allowing for evaluation of differences in aortic lumen diameters as well as differences in length comparing both acquisition techniques at every possible location.

The purpose of this study was therefore to assess diameter, area, volume and length differences between N-MRA and CE-MRA using an in-house developed 3D model-based segmentation approach.

Sixteen healthy volunteers (4 females, 12 males) with a mean age of 50±14 years (range, 31-69 years), a body weight of 77±12 kg (range, 62-110 kg), and a height of 172±9 cm (range, 160-191 cm) were included in this prospective, single-center study. The study was approved by the local institutional review board; oral and written informed consent was obtained from all volunteers prior to MRA examination.

To evaluate accuracy of the automatic model based segmentation approach and to appraise differences between both MRI sequences ex vivo excluding in vivo factors (e.g., aortic, heart, lung movement) a tubular phantom with known dimensions was scanned.

The phantom consists of a straight acrylic tube with an inner diameter of 31.5 mm and a length of 150 mm (Figure 2A). 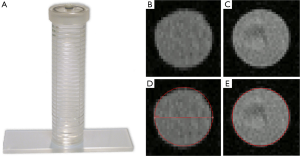 For 3D segmentation of the phantom (Figure 2B-E) and volunteer datasets (Figure 3), we developed an automatic 3D model-based segmentation approach consisting of two steps. In the first step, we determine a coarse segmentation of the aorta using a cylindrical intensity model with circular cross-sections. The model is directly fitted to the 3D image data through an incremental process based on a Kalman filter (16). As a result, we obtain a dense set of 200-300 vessel segments representing the 3D geometry of the aorta. In the second step, we compute a refinement for each vessel segment using a different model with elliptical cross-sections to determine minimum and maximum diameters (17). An advantage of our model-based approach is that quantitative information such as the different diameters, cross-section area, and centerline length are directly accessible from the segmentation result. 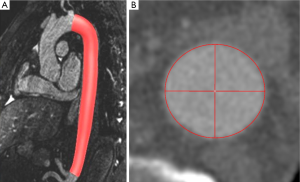 The segmented volumes of volunteer datasets were manually cropped from left subclavian artery to celiac trunk to avoid error due to supra aortic and abdominal side branches. Mean (Dmean), minimum (Dmin) and maximum diameter (Dmax) as well as cross-sectional area (Area) in the resulting volume of interest were computed for individual comparison. Furthermore, centerline length (Figure 1C) and volume of the segmentation of the aortic lumen were calculated.

Wilcoxon-Signed-Ranked-Test (PASW for Windows, Version 17) was used to test for significant differences of measurements obtained from both sequences (N-MRA and CE-MRA). Furthermore a Bland-Altman analysis was performed to assess their respective level of agreement. A P value <0.05 was considered statistically significant.

For the phantom data the 3D model-based segmentation approach yielded submillimeter accuracy with a mean segmentation error for Dmean, Dmin and Dmax between 0.1-0.6 mm regarding the true value of the tubular phantom (Table 1) for both the CE-MRA and N-MRA datasets. At the given in-plane resolution (1.2 mm × 1.2 mm) this error was below 0.5 voxels. Comparing the absolute measurements no differences larger than 1mm in diameter could be observed between CE-MRA and N-MRA sequences. There was also high agreement for area between both sequences (Table 1).

Table 1 Avg and error of Dmin, Dmax and Dmean as well as area assessment in the phantom using the elliptical model based on CE-MRA and N-MRA datasets. True, known dimensions of the phantom are given under the column true
Full table

Differences between both sequences in vivo

Automatic 3D model-based segmentation of all volunteer datasets was successful and the resulting segmented volume of interest is shown in Figure 3A. Note the elliptic shape of the model-fit in Figure 3B. For the volunteer datasets average centerline length obtained based on N-MRA was 239.0±23.4 mm compared to 238.6±23.5 mm for CE-MRA showing no significant difference (P=0.877). Average mean diameter Dmean obtained based on N-MRA was 22.5±3.4 mm compared to 21.4±3.1 mm for CE-MRA (P<0.001). In all cases Dmax obtained from the N-MRA measurements was significantly larger with a mean difference of 1.6 mm (95% limits of agreement from –0.1-3.2 mm) (Figure 4A). Resulting from larger values in diameter and cross-sectional area, volumes obtained based on N-MRA (100.1±35.4 cm3) were consistently and significantly larger compared to CE-MRA (89.2±30.0 cm3) (P<0.001) (Table 2, Figure 4B). Mean difference between two average diameter measurements for a pair of datasets was 1.2±0.5 mm (Table 3). However, difference in diameter measurements decreased continuously from the left subclavian artery to the celiac trunk (Figure 5). 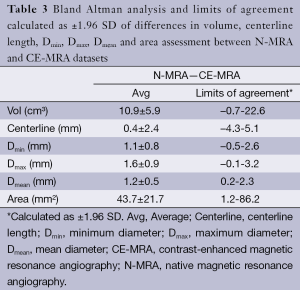 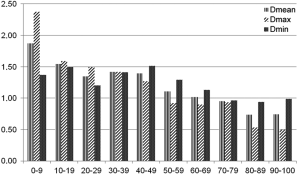 The 3D model-based segmentation approach yielded highly accurate results segmenting the lumen of the phantom; differences compared to true dimension were within submillimeter or subvoxel range, respectively. There was no significant difference for in vitro measurements between both sequences.

Our data is in accordance with a recently published study that also reports larger intraluminal diameters in N-MRA (ECG-triggered 3D-navigated free breathing bSSFP), compared to CE-MRA datasets in diameter measurements of the ascending aorta (11).

Compared to the gold standard multidetector computed tomography (MDCT) variation of vessel diameter in the thoracic aorta and supra aortic branches in pigs compared to N-MRA (ECG-triggered, 3D-navigated free breathing bSSFP) was 0.5 mm. Unfortunately, CE-MRA was not part of this protocol (7).

Further studies with a higher number of subjects are needed to assess which of both sequences best reflects true intraluminal dimension in vivo.

Due to the fact that extrinsic contrast agent is not necessary; indications for N-MRA are various. Examination time is not limited by contrast passing, therefore acquisition of high resolution ECG—and respiratory triggered datasets is possible and especially useful in evaluation of the thoracic and especially ascending aorta where correct diameter assessment is limited in CE-datasets due to motion artifacts.

Furthermore it is useful in patients with impaired renal function that are prone to renal insufficiency when given nephrotoxic contrast agent in MDCT, or nephrogenic systemic fibrosis when given gadolinium chelate based contrast agent in MRI (19). We acknowledge the following limitations of our study. Even though in-plane resolution was the same for both sequences, slice thickness of the CE-MRA was 0.3 mm larger than for the N-MRA Furthermore, the CE-MRA acquisition was not ECG gated. However, ECG-gating would have required to under sample the k-space with subsequent loss of spatial resolution to avoid an increase in acquisition time. In the context of translation into clinical routine the authors are aware that healthy volunteers were investigated and no patients. This is the reason why we could not compare MRA to CTA datasets. For methodological purposes we aimed to further investigate our new model-based segmentation approach under best conditions and avoid possible artifacts.

In this early stage of evaluating the 3D model-based segmentation approach for CE- and N-MRA and comparing both sequences, side branches were disregarded to exclude potential errors due to motion artifacts as well as segmentation challenges.

In conclusion 3D morphometric assessment is possible with the presented 3D segmentation approach and the results show highly similar centerline lengths for N-MRA and CE-MRA. However, there is a systematic increase in intraluminal diameter and volume for N-MRA compared to CE-MRA especially in the proximal descending aorta. Further studies are warranted to assess which of both sequences represents true aortic dimensions the best.