Myocarditis is a relatively common inflammatory disease that affects the myocardium. Infectious disease accounts for most of the cases either because of a direct viral infection or post-viral immune-mediated reaction. Viral myocarditis is identified in up to 9% of post-mortem examinations (1,2), has been reported in up to 12% of young adults presenting with sudden death (3-6) and is an important underlying aetiology of other myocardial diseases such as dilated cardiomyopathy (7). Myocarditis may present with a wide range of clinical forms, ranging from asymptomatic (such as 1:200 after measles vaccine) (8), mild dyspnoea or chest pain that resolves without specific therapy, to cardiogenic shock and death (9). It may simulate acute coronary syndromes and accounts of more than 50% of patients with acute chest pain, elevated troponin and normal coronary arteries in the angiogram (10).

Several parameters showed that myocarditis could be associated with poor outcome (12-14), including clinical symptoms, type of viruses, LV size and function, and LGE, which has been identified as a predictor of long-term mortality in other nonischemic heart diseases (15,16). In a recent large single centre study, among patients with biopsy-proven viral myocarditis undergoing CMR scans, myocarditis was associated with a long-term mortality of up to 19.2% in 4.7 years. In addition, the presence of LGE was the best independent predictor of all-cause mortality and of cardiac mortality (17).

The aim of this study was to assess the rate of clinical events in our population of patients with myocarditis diagnosed by CMR scan.

Patients who consulted to the emergency department with suspected myocarditis from January 2008 to May 2012 and with CMR diagnosis of myocarditis were retrospectively included in the study. A CMR protocol was performed in all patients. Patients were included if they had (I) clinical symptoms compatible with acute myocarditis, such as chest pain or dyspnoea in the last four weeks with or without viral prodromes (fever, myalgia, and respiratory or gastrointestinal symptoms 48 hs from the symptoms); and (II) CMR scan compatible with myocarditis (non-ischemic LGE associated with increase signal intensity on T2-weighted images). All patients underwent blood sample analysis to determine troponin levels. Patients with positive troponin levels were hospitalized in a chest pain unit. Patients were excluded if they had (I) significant coronary artery disease on a coronary angiogram; (II) other causes of chest pain or dyspnoea (e.g., pulmonary embolism); (III) contraindication to undergo a CMR scan (e.g., permanent pacemaker, implantable defibrillator, intracranial or spine cord metal clip, claustrophobia, renal dysfunction with a glomerular filtration rate <30 mL/kg/min, mechanical valve unsuitable for magnetic resonance scan) or (IV) lack of follow-up. Coronary artery disease was ruled out by anatomical coronary test or stress test. Fourteen (31%) patients underwent to an anatomical test (multi-detector computer tomography n=4 and invasive angiography n=10). Patients who had not performed an anatomical test to rule out coronary artery disease underwent a stress test after discharge.

This was a retrospective study that included patients at the emergency department with symptoms compatible with myocarditis and diagnosis of myocarditis by a CMR scan. Clinical characteristics and clinical events were obtained from the electronic patient notes. The Local Independent Research Board approved the study.

Patients were scanned while they were supine on a 1.5-T Avanto (Siemens, Erlangen, Germany). Cardiomyopathy CMR protocol includes steady state free precision cine sequences from base to apex to evaluate for presence of regional or global left and right ventricular systolic dysfunction. T2-weighted with triple inversion pulse to assess for myocardial oedema. Ten minutes after administration of 0.2 mmol/kg gadolinium, delay enhancement imaging was performed in slice orientations matching cine imaging using a standard or phase sensitive inversion recovery gradient-echo pulse sequence or phase sensitive. Manual adjustment of the inversion time is performed when needed for optimal contrast resolution. For myocardial oedema a quantitative analysis by normalizing the signal intensity of the myocardium to that of skeletal muscle has been shown to allow for the detection of a global T2 signal abnormality. Values for the T2 ratio of more than 1.9 indicate oedema (11). Semi-automated quantitative software (Argus Siemens Inc., Erlangen, Germany) was used to obtain the end-diastolic volumes, end-systolic volumes, and ejection fraction of both the left and right ventricles. Extent of LGE was assessed using the Siemens Argus analysis software package and the results were expressed as LGE mass, LGE mass index and LGE percentage of myocardial mass

Patients were followed up for assessing the rate of the composite endpoint of all-cause death, congestive heart failure, sudden cardiac death, hospitalization for cardiac cause, recurrent myocarditis or need of radiofrequency ablation or implantable cardiac defibrillator (ICD). All patients were followed up for at least for six months. Sudden cardiac death was defined as unexpected arrest of presumed cardiac origin within 1 h after onset of any symptoms that could be interpreted as being cardiac in origin.

Thirty-two patients with myocarditis were included in the study. The mean age was 42.6±21.2 years and 81.2% were male. Baseline characteristics are shown in Table 1. Half of the patients had prodromes of viral infection: respiratory symptoms were observed in 25% (n=8), gastrointestinal symptoms in 18% (n=6), and fever in 21% (n=7).

At the time of admission 68% (n=22) of the patients had chest pain, 21% (n=7) had dyspnoea and 15% (n=5) heart failure. Eighty seven per cent of patients (n=28) had an abnormal electrocardiogram and 81% (n=26) high levels of troponin I (9.9±12.7 ng/dL). Coronary artery disease was ruled out by invasive angiography in 31% (n=10) and multi-detector computer tomography in 12% (n=4) during the admission. Patients who had not performed an anatomical coronary test underwent a stress test after discharge. The stress tests were negative for ischemia in all patients (exercise test n=10, echocardiogram stress n=5 and nuclear myocardial scan n=3). The mean ejection fraction was 55.1%±11.7% and 32.2% (n=10) of patients had a low ejection fraction. LGE was located in the sub-epicardial or intramural areas of the left ventricle (LV) (Table 1) (Figures 1,2,3). None of the patients had LGE with subendocardial pattern. LGE was present in all of patients and compromise 6.1%±5.6% of left ventricular mass (Table 1). High signal on T2-weighted images were present in 78% (n=25) of the patients. 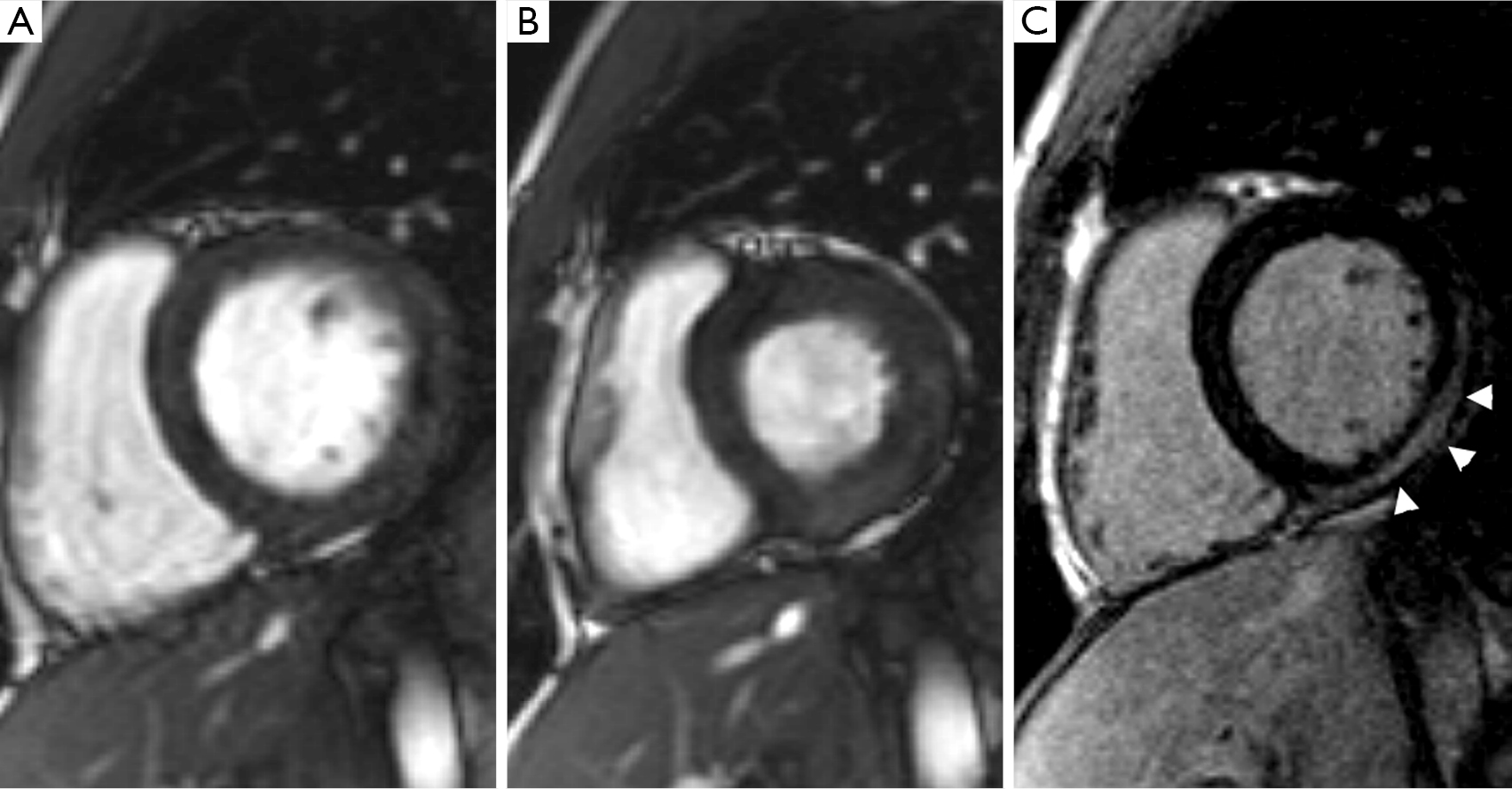 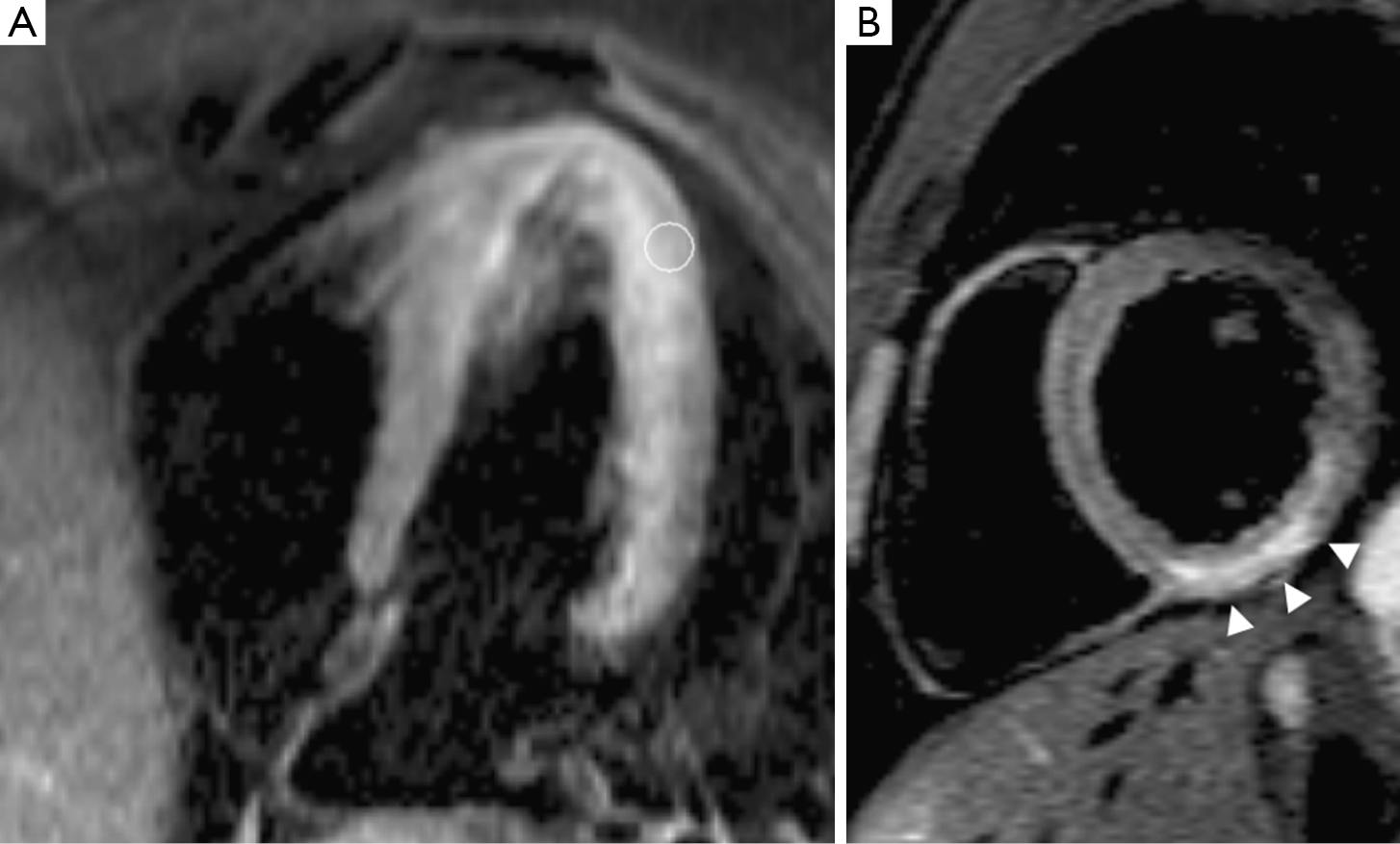 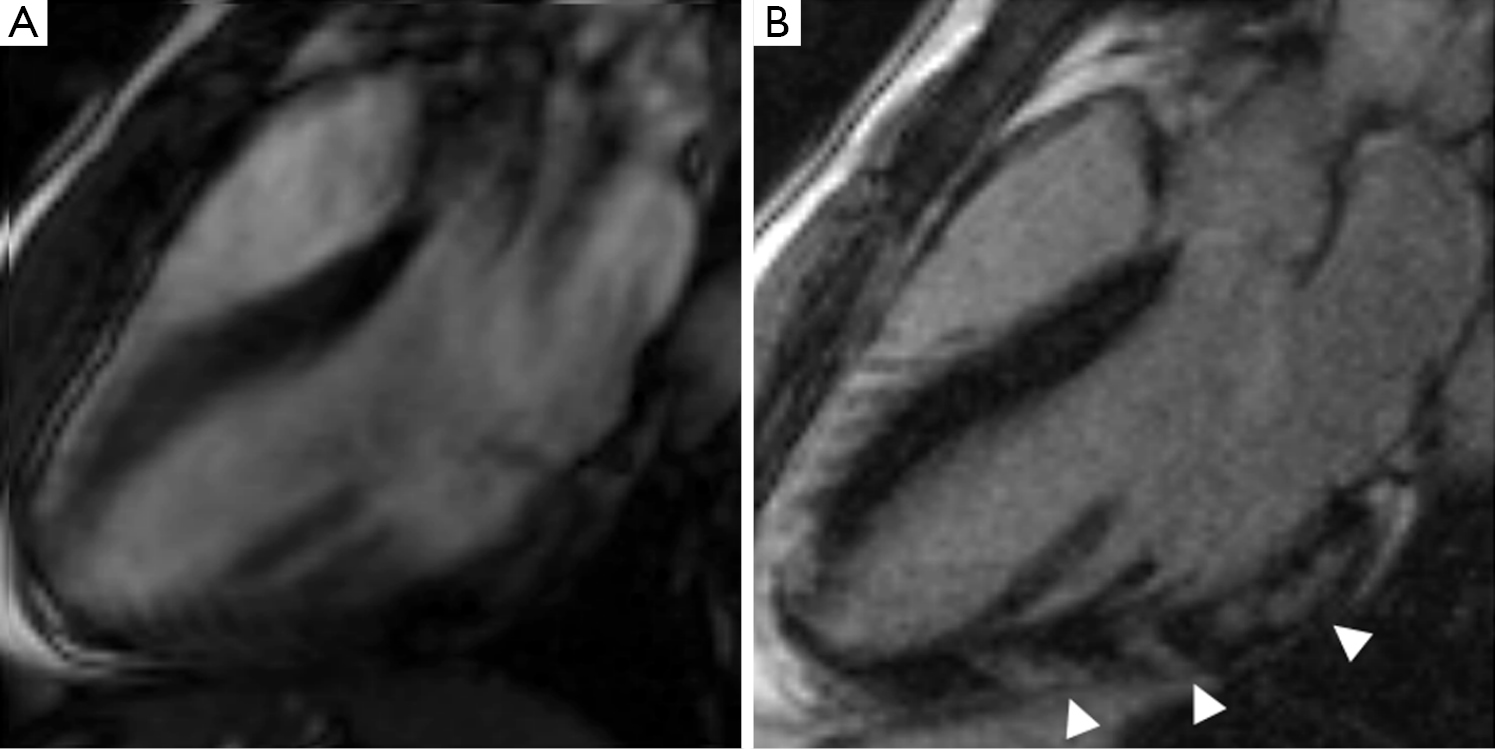 All patients were followed up for 30.4±17.8 months. The rate of the composite endpoint of all-cause death, congestive heart failure, sudden cardiac death, hospitalization for cardiac cause, recurrent myocarditis or need of radiofrequency ablation or ICD was 15.6% (n=5) (Figure 4). Two patients had heart failure (one of them had a heart transplant), one patient needed an implantable cardio-defibrillator because of ventricular tachycardia and two other patients were re-hospitalized one because of recurrent chest pain and recurrent myocarditis respectively. No mortality was observed. 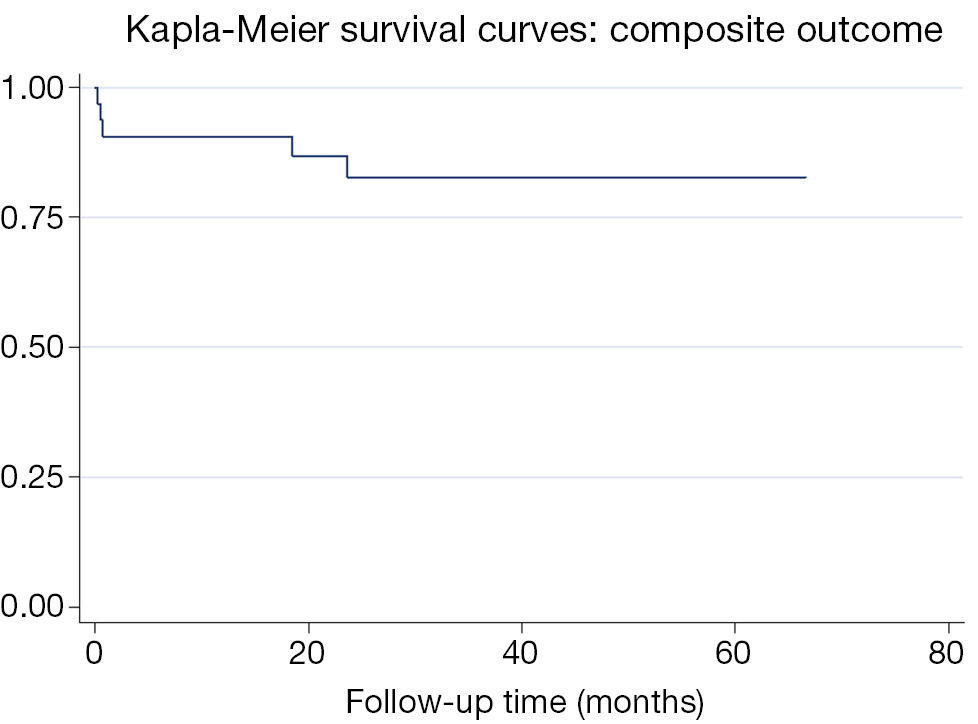 In our population of myocarditis diagnosed by CMR, we found a low rate of cardiovascular events. There was no mortality even among those with poor ventricular function and positive serum biomarkers. These findings differ from recently published (17).

Grün et al. studied 222 patients with acute myocarditis with biopsy-proven viral myocarditis (17). Patients underwent a CMR scan within five days after biopsy and coronary artery disease was ruled out by coronary angiography. They found 19.2% (n=39) all-cause mortality in a mean follow up of 4.7 years. The majority of the events (n=29) were cardiac and the remaining events were not cardiac related. In Grün et al. study, 62.9% of patients were referred to a large university hospital from other institutions. Several reasons might explain the difference in mortality in this study compared to Grün et al. myocarditis study. In our study, patients were self-presenting in a general community hospital so patients are more representative of the general population than patient referred to a tertiary hospital. Other studies included patients who had biopsy-proven viral myocarditis (18-21). According to clinical guidelines, cardiac biopsy is indicated only in scenarios that are compatible with fulminant myocarditis, giant cells myocarditis and acute heart failure unresponsive to treatment (22). Therefore, patients referred and included into Grün study might have had a more severe myocarditis. In our study, only one subject underwent cardiac biopsy because of acute heart failure unresponsive to treatment.

LGE is associated with adverse outcomes in patients with viral myocarditis. In the study of Grün et al., LGE was useful for non-invasive risk stratification of myocarditis patients with a hazard ratio of 8.4 for all-cause mortality and 12.8 for cardiac mortality, independent of clinical symptoms (17). No patient without LGE experienced sudden cardiac death. In our study, although all the patients had LGE, no mortality was found. It can be speculated that in a subgroup of patients with a more severe myocardium involvement, LGE can be used as a prognostic tool (17).

The small number of patients included and the low cardiovascular events is a limitation for this study, so these findings have to be tested in a larger prospective study. Diagnosis of myocarditis was based on clinical assessment and CMR findings and only one patient had biopsy-proven myocarditis. The CMR criteria of T1-weighted images pre-gadolinium and post-gadolinium injection (hyperemia) were used in a limited number of patients and diagnosis was mainly based on T2-weighted and LGE images. Coronary artery disease was ruled out by invasive angiography or multi-detector computer tomography only in 43% of the patients.

In our series of acute myocarditis diagnosed by CMR and preserve ejection fraction, we found a low rate of cardiovascular events and no mortality. These findings might oppose data from recently published myocarditis trials.