Myocardial infarction (MI) is a widespread medical condition that has been the leading cause of death across different countries (1). During infarction, myocardial cells are deprived of oxygen, which results in an irreversible damage to myocardial cells. Cardiac fibrosis (a form of tissue remodeling mechanisms) happened after MI has been viewed as a crucial risk factor of heart failure (HF) (2,3). The myocardial injury during infarction is mediated by many cellular and molecular mechanisms including the impairment of mitochondria, endogenous antioxidants and lipid peroxidation (4).

Isoproterenol (ISO)-induced MI is a commonly animal model for MI (5). That can mimic many clinical and pathological features of MI in human. In this model, ISO can increase the workload of myocardial cells and raise the demand for O2, which in turn leads to relative myocardial hypoxia. On top of that, direct O2-wasting effect of catecholamines or their autoxidation products may result in hypotension, which further intensify the infarction (6).

Autophagy is an important compensatory mechanism process in responses cellular stress, in which proteins and damaged cellular organelles are digested by lysosomes in order to provide essential nutrients for keeping cell alive (7). Autophagy is also actively involved in various heart diseases including MI (8). During MI, energy deprivation or hypoxia may lead to the activation of AMP-activated protein kinase (AMPK), a highly conserved protein serine/threonine kinase (9). AMPK can then facilitate autophagy through the regulation of metabolic pathways. Studies have shown that AMPK protects myocardiocyte from hypoxia induced injury both in vivo and in vitro (10-12).

Panax ginseng is an important traditional Chinese herbal medicine that is widely used in treating many diseases. Ginsenoside Rg3 (Rg3) is the active ingredients of Panax ginseng. In recent studies, it is reported that Rg3 can regulate mitochondrial turn-overs (13) and autophagy (14). In present study, we proposed that Rg3 can improve myocardial injury induced by ISO through AMPK mediated autophagy.

Balb/c mice (6–8 w, male) were purchased from the VLAT (Vital River Laboratory Animal Technology, Beijing, China). All procedures and protocols using animal were in compliance with the AMRC (Animal Management Rule of China, Ministry of Health, document no.55, 2001). Rg3 (Meilunbio, China) was diluted in DMSO for stocking solution and further diluted at indicated concentrations in culture medium. Isoproterenol (ISO) was purchased from Sigma-Aldrich (USA).

Male Balb/c mice were housed under standard conditions and were given rodent chow and water freely. All of the experimental procedures were performed in accordance with the Guidelines for Animal Experiments from the Committee of Medical Ethics. We induced MI model using previously described experimental procedure (15). Mice were randomly divided into 4 groups: (I) control group (n=9): subcutaneous (s.c.) injection with DMSO (2 mL/kg/day, for 2 days); (II) ISO group (n=9): s.c. injection with ISO (20 mg/kg/day, for 2 days); (III) ISO plus Rg3 (n=9) and (IV) ISO plus Rg3 and compound C (n=9): s.c. injection with Rg3 (5 mg/kg, every 12 h) or compound C (10 µmol/L, every 12 h) for 2 days before injection with ISO. Then, Serum was isolated from blood and used for testing BNP and LDH levels. All of the animals were sacrificed by exsanguinations.

Hearts were washed, immediately fixed with 10% NBF (neutral buffered formalin) and embedded in paraffin. We then performed H&E staining on these tissue sections. The images are captured by a light microscopic to monitor histopathological changes.

Western blotting was performed as previously described (16). We isolated protein from heart and resuspended the protein in sample buffer. The protein mixture was then denatured in boiling water for 10 min. The protein samples were loaded in 10% SDS-PAGE in running buffer. The proteins were then transferred to a nitrocellulose membrane for 2 hours at 4 °C at 200 mA with a transfer buffer. Nonspecific proteins were blocked by incubating the membrane with 5% non-fat dry milk in TBS-T for 1 hour at RT. Then, the nitrocellulose membrane was incubated with the primary antibodies overnight at 4–8 °C and then with secondary antibody for 1 hour at RT. The reaction was visualized by ECL. The films were scanned and then analyzed by a NIH imaging software. Protein contents were normalized to β-actin.

BNP, LDH and ROS in serum

BNP level and ROS release in serum were determined by commercially available ELISA kits. ELISA plates were coated with monoclonal antibody against BNP and ROS. Dilutions of cell-free supernatants were added in duplicate, and then a second horseradish peroxidase-conjugated goat polyclonal Ab against BNP and ROS were added. After washing to remove any unbound Ab-enzyme reagent, a substrate solution was added to the wells. The color development was stopped with 2N sulfuric acid, and the intensity of the color was measured at 540 nm on a spectrophotometer. The sensitivity of ELISA for BNP and ROS were 1 pg/mL. Measurement of LDH activity in serum was as described (15), level of LDH was expressed as unit per liter for serum.

The data are represented as means ± SDs. One-way ANOVA was used to compare three or more groups, and Tukey’s post-hoc test was used to test for comparing differences between individual groups. Graphpad Prism software, version 5, was used for data analysis and visualization. P<0.05 was considered statistically significant.

H&E staining of the tissue section showed that in control mice the structure of the myocardium is homogenous and clear, with no signs of edema or any inﬂammation. On the other hand, mice injected with ISO had moderate-to-severe necrosis of myocardium, edema, as well as massive infiltration of immune cells including both myeloid cells and lymphocytes. Furthermore, the mice treated with Rg3, compared to ISO-challenged mice, showed significantly improved myocardial necrosis, a substantial decrease of edema and fewer infiltration of immune cells. Interestingly, the anti-myocardium injury effect of Rg3 was blocked by the administration of AMPK inhibitor compound C (Figure 1A).

We then examined the Bcl-2/Bax ratio at protein level to better understand the antiapoptotic action of Rg3 on myocardium. Interestingly, we found the decrease of myocardium apoptosis is associated with the reciprocal change pro-apoptotic molecule Bax and anti-apoptotic molecule Bcl-2, which has been shown to be important for myocardium survival during sepsis. These data together indicate that Rg3 can decrease myocardium apoptosis and improve cardiac function. Compared with ISO group, the ratio of Bcl-2/Bax strongly increased by 2.4-fold in group treated with Rg3+ISO (P<0.05, Figure 2). In addition, the cardioprotective effect of Rg3 was blocked by the administration of AMPK inhibitor compound C, indicating that Rg3 reduces ISO-induced cardiomyocyte apoptosis through the activation of AMPK (Figure 2). 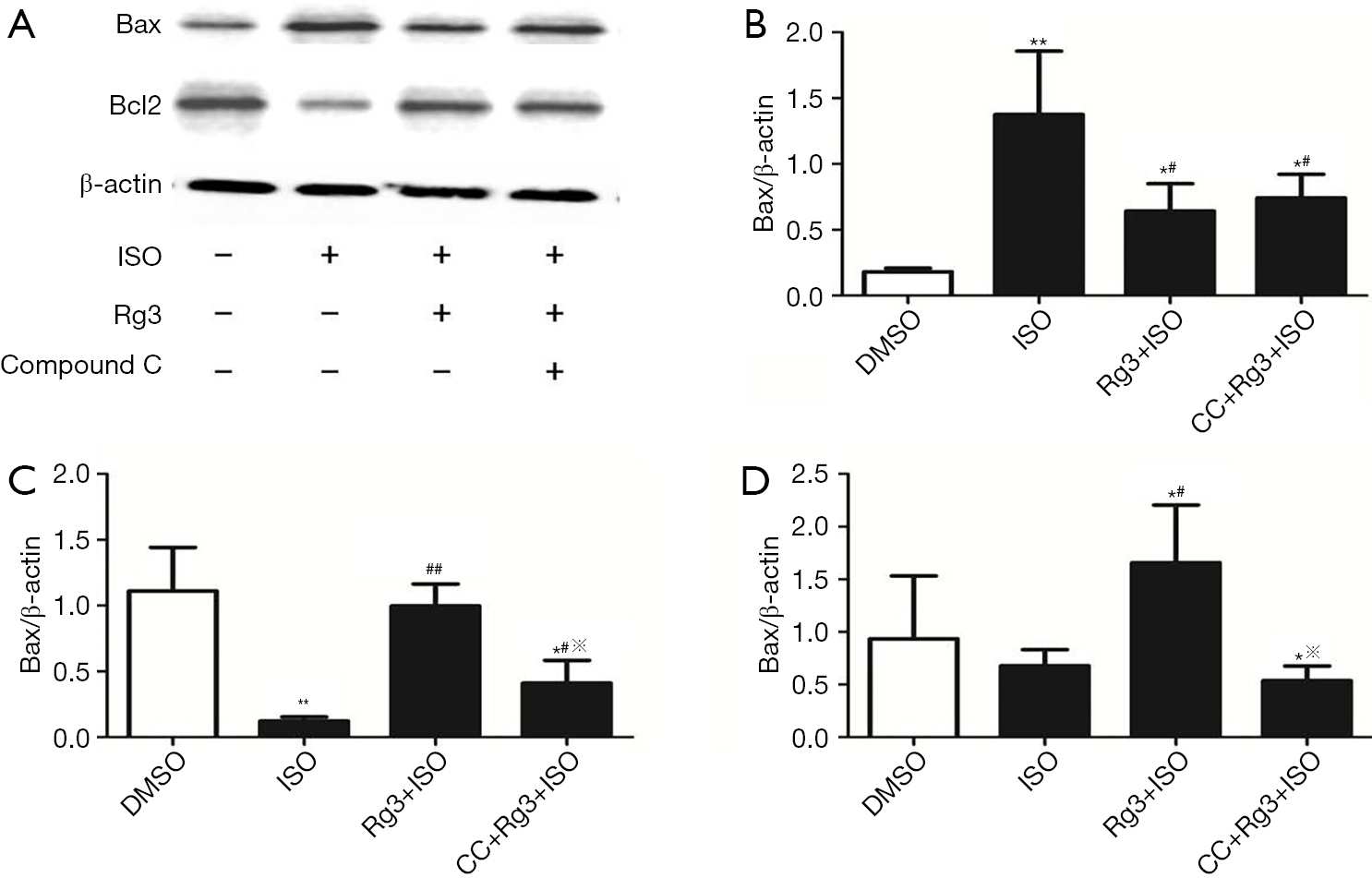 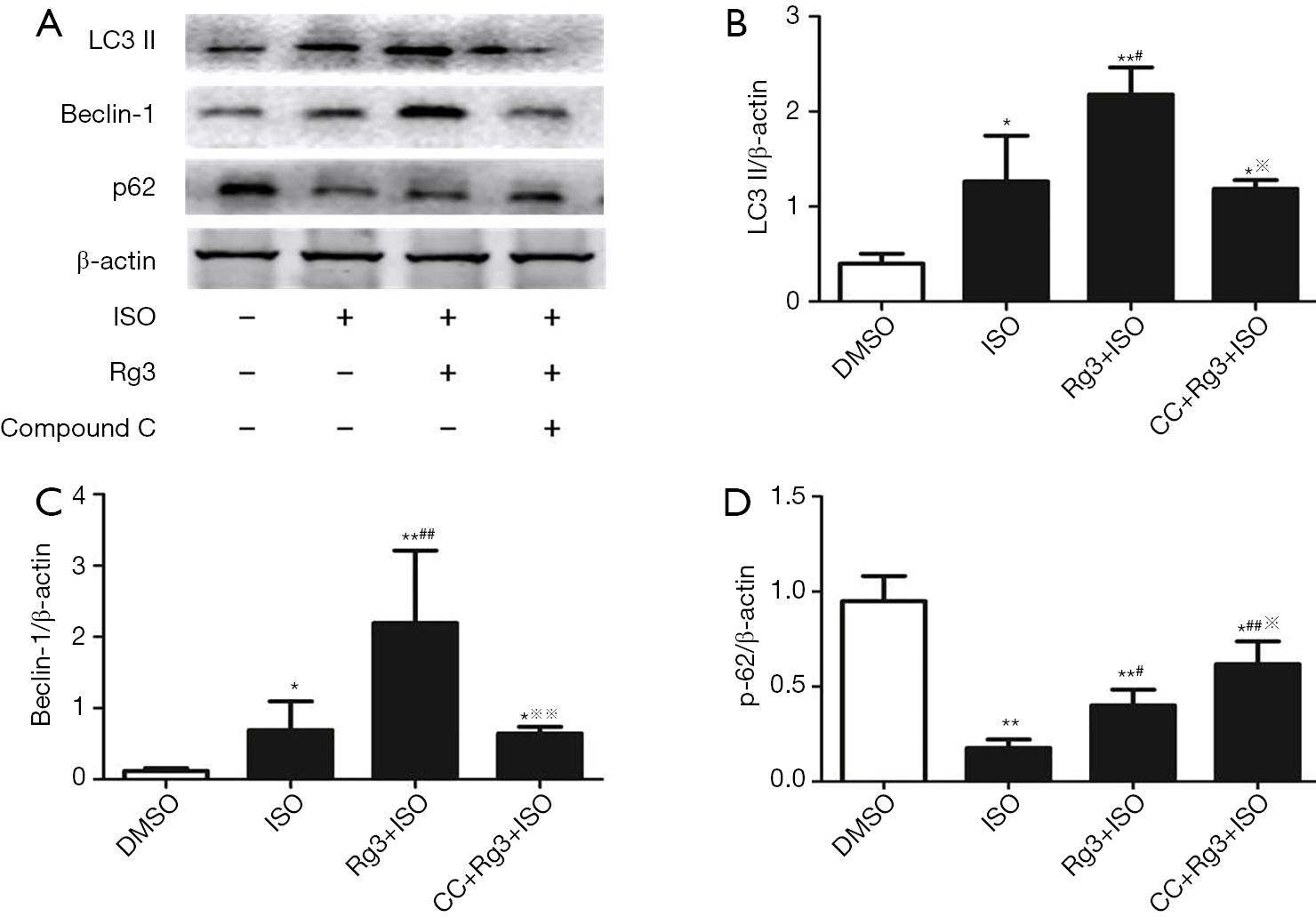 In this study, using mouse model of MI, we have demonstrated that Rg3 significantly attenuated ISO induced cardiac injury, as demonstrated by the reduced LDH and BNP levels in blood and reduced cardiomyocyte apoptosis. Our study also revealed that treatment of Rg3 upregulated mitochondrial autophagy, at least partially through AMPK signaling pathway.

MI, a serous CVD, is a prominent cause of death around the world (1). Cardiotoxicity caused by isoproterenol (ISO) at a higher dosage in an animal model exhibits a better discernment in myocardial damage and suggesting the involvement of oxidative stress. ISO is a classic tool agent in ischemic heart disease and HF investigations. ISO-induced MI animals show excessive generation of ROS followed by enhanced oxidative stress (17). Several preclinical studies have suggested that during MI, oxidative stress is significantly increased via ROS and involved in the pathogenesis of MI (18).

Rg3 has been demonstrated to have a broad range of beneficial effects for the cardiovascular system (19,20). Our study showed that Rg3 exerts potential cardioprotective effects during oxidative cardiac damage as indicated by reduced levels of cardiac injury markers and ameliorated histological changes in the heart. We also observed that serum BNP and LDH activities were significantly up-regulated in the ISO-treated mice, suggesting some leakage of LDH and BNP from dying/dead cardiac cells into the circulation. In our results, mice treated with Rg3 had decreased necrosis with edema and infiltration of myocardium cells. This finding presents a marked improvement in myocardium necrosis, possibly due to the antioxidant effects of Rg3. We also found Rg3 treatment to ISO-challenged mice drastically reduced ROS content in myocardium.

Autophagy is a self-degradative process and is actively involved in the pathogenesis of various heart diseases (8). Autophagy is important for the quality control of mitochondria (21). In the present study, Rg3 was also found to have the function to remove the dysfunctional mitochondria through increasing the mitophagy in ISO-induced myocardium. Mitophagy refers to selectively degrading mitochondria by autophagy, which can reduce the accumulation of mtDNA mutations (22). When the body undergoes negative stimulations from outside world, the selective autophagy in mitochondria may occur (23). Our study found that Rg3 treatment has the function of inhibition of apoptosis of myocardium. Also, Rg3 can unregulated the autophagy-related proteins.

More interestingly, in the present study, Rg3 was found to promote the phosphorylation of AMPK. AMPK is an energy sensor of cells, regulating cellular energy metabolism, and its activation is conducive to rectifying metabolic disorders, making cell metabolism to be physically balanced (24). Activated AMPK can promote autophagy by inhibiting TORC1 complex (24). Therefore, we propose that Rg3 exerts mitochondrial protective function via activation of AMPK signal pathway, then further promotes mitochondrial autophagy in MI models. Furthermore, mitochondria are the key sites for fatty acid metabolism, while AMPK can affect the energy metabolism of mitochondria by influencing the activity of ACC (24,25). In the current study, we also showed that Rg3 promoted the phosphorylation of ACC. ACC can catalyze the carboxylation of acetyl CoA and thus convert it into malonyl CoA, which is the fatty acid synthesis precursor and meanwhile inhibits the oxidation of fatty acids in mitochondria (25). AMPK can phosphorylate ACC, resulting in its decrease in activity and thus reducing the level of malonyl CoA (24,25). We found Rg3 could significantly upregulate the phosphorylation of AMPK and ACC. In order to test the direct role of AMPK to ISO-induced cardiac dysfunction, we used AMPK inhibitor, compound C. We found that compound C pretreatment could block the effects of Rg3 on heart protection. Which suggests that, at least partially by AMPK-autophagy signaling pathway, Rg3 inhibits ISO-mediated myocardium injury.

Taken together, our study indicates that Rg3 pretreatment attenuated MI induced depressed cardiac function and upregulated autophagy process through the AMPK signaling pathway. For the first time, we show that Rg3 protects heart against MI, at least partially through upregulation of myocardial autophagy, which may provide a deeper insight into the mechanism underlying the wide cardiovascular protective actions of Rg3 and provide therapeutic basis for the clinical use of Rg3.

Funding: This work was supported by the Science Foundation of The fourth affiliated hospital of Harbin medical university (grant no. HYDSYJQ 201603 to B Zhang; HYDSYTB201901 to XP Bai); the Provincial Youth Science Fund of Heilongjiang, China (QC2016106 to B Zhang); the Health and Family Planning Commission of Heilongjiang Province (Grant no. 2016-119 to HQ Cai).

Conflicts of Interest: All authors have completed the ICMJE uniform disclosure form (available at http://dx.doi.org/10.21037/cdt.2020.01.02). The authors have no conflicts of interest to declare.