Most cardiovascular conditions are either acquired or congenital in origin, but in rare instances, a combination of both is found. Lutembacher syndrome (LS) refers to the uncommon combination of acquired mitral stenosis (MS) and congenital atrial septal defect (ASD) (secundum type). Other forms described in the literature include iatrogenic LS and reverse LS (1). LS is a very rare entity with incidence reported to be 0.001 per million populations with a female predominance (2,3). Symptoms present at any age. The prognosis is good before the onset of pulmonary hypertension and right heart failure. Surgical and percutaneous trans-catheter therapies with balloon valvuloplasty and septal closure using an Amplatzer closure device have proven to be beneficial (4). We report the case of a young adult male who presented with this rare clinical syndrome, apparently the first reported in the Central African literature.

A 38-year-old male farmer presented with a 10-month history of progressive shortness of breath on exertion and fatigue, which had worsened recently. Two weeks prior to consultation, he started experiencing occasionally SOB at rest, which was worse when he lay supine. He also had initially unproductive cough, but two episodes of frothy pink coloured sputum 2 days prior to presentation. There was no documented history of acute rheumatic fever in childhood. He had been evaluated in several peripheral hospitals without final diagnosis and only mild amelioration of symptoms. On examination he was in severe respiratory distress (respiratory rate 44 cycles/min), consistent with congestive heart failure (NYHA III). He was afebrile (temp 36.8 °C). His vital signs included a blood pressure of 90/68 mmHg, with a pulse rate of 120 beats/min (irregular). He had distended jugular veins, and chest examination revealed praecordial hyperactivity, displaced apex beat to left 5th intercostal space anterior axillary line, diastolic murmur (3/6) at the apex with irregular heart sounds and features suggestive of right pleural effusion and crackles in left lung base. The abdomen was mildly distended with tender hepatomegaly (liver span of 16 cm), and ascites. He had bilateral pitting pedal oedema. A working diagnosis of severe congestive heart failure was made. Investigations (Results) included: chest X-ray [Cardiomegaly with CTR (cardiothoracic ratio) of 0.7 and right pleural effusion], ECG (atrial fibrillation), echocardiography [severe MS, ASD ~28 mm, pulmonary artery systolic pressure (PASP) =50 mmHg] (Figures 1-3), full blood count (within normal limits), liver function tests (high normal), hepatitis B and C screen were negative, Urea =27 mg/dL, creatinine =0.9 mg/dL, Na+ =136 mEq, K+ =3.8 mEq. He was placed on oxygen and nursed in 45 °C sitting position. Medications included intravenous furosemide and digoxin. Unfortunately, patient died in the early hours of the second day of admission. 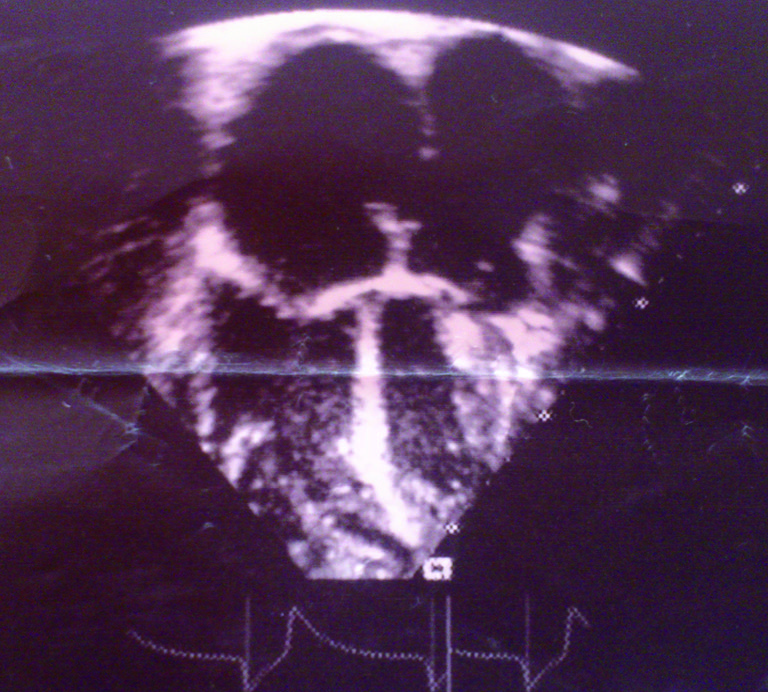 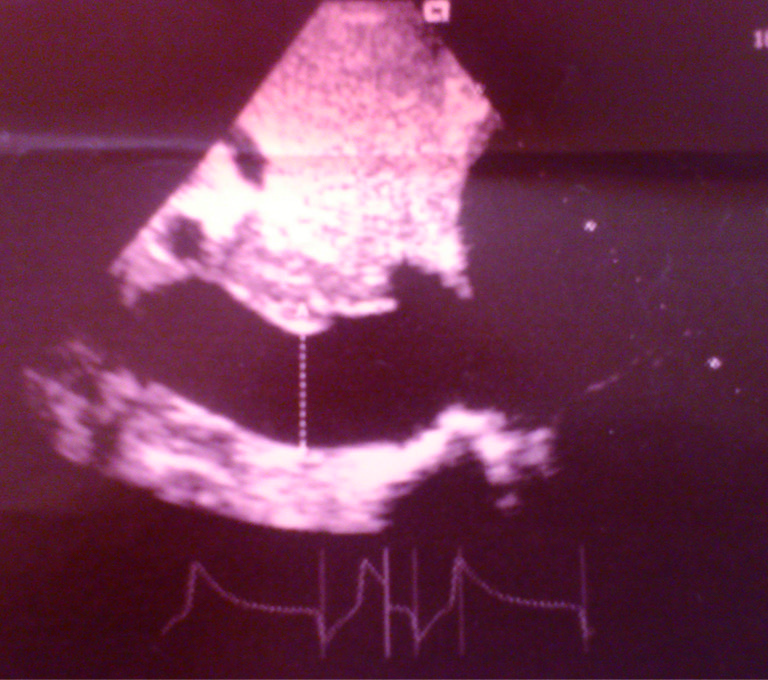 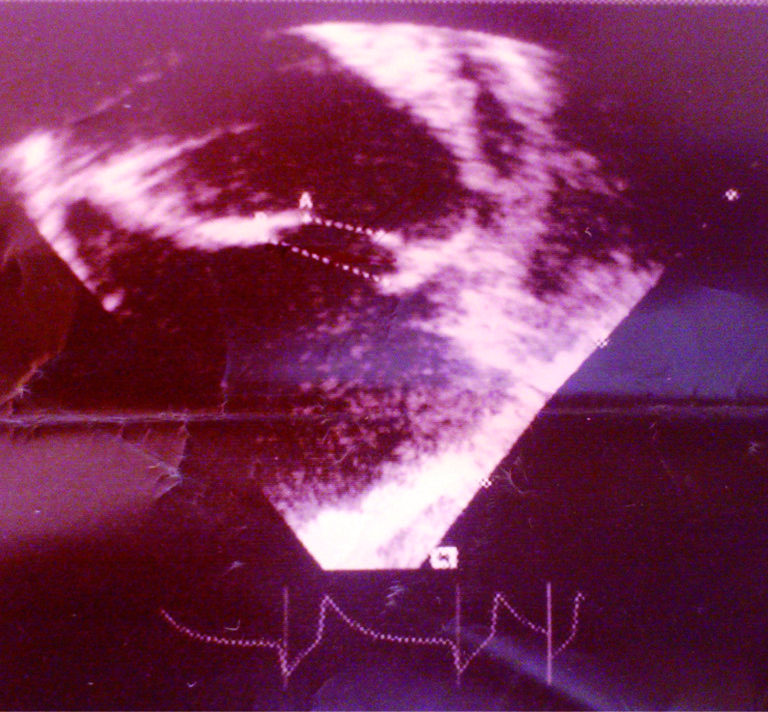 Cardiovascular disease is a growing public health issue in Cameroon. Recent hospital data from the only cardiothoracic surgical centre in Central Africa describes a prevalence of congenital heart disease among children of 4.3% with isolated ventricular septal defect (VSD) being the most common condition, followed by tetralogy of Fallot. Furthermore, post-rheumatic valvulopathies remain a major cause of congestive heart failure in young adults (5) as opposed to systemic hypertension in the elderly (6).

LS was first described in the medical literature in 1750, with the first published data in 1916 (7). It describes the combination of an ASD and mitral stenosis (MS, congenital or acquired). The ASD may either be congenital (most commonly ostium secundum) or iatrogenic secondary to trans-septal puncture during mitral valvuloplasty for acquired MS. The ASD in Lutembacher generally should have a diameter >1.5 cm (1). This later causes a systemic to pulmonary shunting of blood causing progressive pulmonary vascular disease and pulmonary arterial hypertension (PAH) and eventually Eisenmenger syndrome. The rare scenario of reverse LS describes development of a predominant right-to-left shunt in the context of ASD and severe tricuspid stenosis (8). The haemodynamic effects of LS are usually due to the relative interplay of the effects of the MS and the ASD, and the direction of blood flow depends greatly on the compliance of the right and left ventricles (9,10). Thus, pulmonary vascular resistance, compliance of the right ventricle, size of ASD and severity of MS are recognized factors which influence the natural history and haemodynamic features in patients with this syndrome (10). The interplay of ASD and MS are seen in Table 1.

Congenital MS is rare and accounts for 0.6% of congenital heart disease cases at autopsy. Its occurrence in patients with ASD is 4% but on the other hand, the incidence of ASD in MS is 0.6-0.7% (3). A necropsy study in the U.S found 5 out of 25,000 autopsies with the combination of ASD and MS and another study found an incidence of 0.001 per million population (2).

LS may present at any time in the life of a patient. In low-income countries with a high incidence of rheumatic heart disease, it is seen most commonly among symptomatic young adults (1). In developing countries, a history of rheumatic fever is identified in up to 40% of patients with LS (10). Depending on the stage of the hemodynamic changes at the time of diagnosis, patients may present with fatigue and exercise intolerance or frank symptoms of right heart failure as in our case. Features of pulmonary congestion may also be present especially in patients with reverse LS and those with small ASD (1).

Chest radiography (cardiomegaly, pulmonary congestion) and ECG (Atrial fibrillation, bundle branch block, and right ventricular hypertrophy) may be seen (10). However 2-dimensional echocardiography with colour flow and Doppler is the diagnostic modality of choice. Echocardiography allows identification of right atrial dilation, presence, size and type of ASD. Planimetry (preferred for MS severity as opposed to the pressure half time method) defines the mitral valve orifice area and colour flow and Doppler demonstrate the shunt across the ASD, mitral valve stenotic gradient, and presence of mitral and tricuspid regurgitation (11).

Early diagnosis and surgical treatment of this syndrome is associated with good outcome, but with the onset of pulmonary hypertension and heart failure, the prognosis is usually poor (2,12), as exemplified by the described case report. If identified early, the patient may benefit from corrective surgery, with several described surgical techniques. However, more recently, percutaneous trans-catheter therapy has become the most widely accepted therapy, using balloon mitral valvuloplasty for MS (the Inoue balloon being most widely used) and the Amplatzer atrial septal occluder for closure of an ASD (4). Percutaneous correction is preferred to surgical correction as there is decreased morbidity compared to open-heart surgery. There is also faster recovery with decreased length of hospital stay (13). When patients present in advanced states (with severe pulmonary hypertension and congestive heart failure) like in our case, and are considered ineligible for surgery, conservative management of the heart failure is palliative in nature (2). The majority of these patients will die from heart failure, cardiac arrhythmias and thrombo-embolic cerebrovascular diseases (14).

The only cardio-thoracic surgical centre in Central Africa may provide corrective surgery for patients with LS, but the diagnosis would need to be made early enough. Unfortunately, most patients in rural settings present to the hospital in advanced stages with severe symptoms, and often the diagnosis is made too late for curative treatment. In low-income settings like ours, where percutaneous techniques are not readily available, and fully-equipped intensive cardiac care units are absent in rural hospitals, management of LS is very difficult. Together with the high cost of open heart surgery, very limited health insurance coverage account for poor outcome and case fatality as in our patient. Thus, several factors (patient, social, financial) account for poor prognosis of this syndrome in our healthcare setting. Each of these patients is a reminder of the need to focus on cardiovascular disease in sub-Saharan Africa (15).

LS remains a rare clinical entity. If diagnosed early, patients benefit from surgical or percutaneous trans-catheter therapy. In contrast, outcome is poor with high mortality in the absence of appropriate and timely intervention in low-income settings, as described here in a case reported from Central Africa.

Consent: Written informed consent was obtained from the next of kin of the patient for publication of this case and any accompanying images.