Genetic disorders of surfactant production and metabolism (ABCA3, SFTPB, SFTPC) present with a high phenotypic variety, ranging from severe respiratory failure at birth to interstitial lung disease in older children and adults (1). Patients may also develop pulmonary hypertension (PH), which can be life-limiting, if right ventricular (RV) failure is impending (1,2). In addition to standard treatment protocols aimed at treating the underlying lung disease (e.g., corticosteroids, hydroxychloroquine, and supportive measures), pulmonary vasodilators have been used in patients with PH associated with developmental lung disease with different results (1).

Reverse Potts shunt creation by ductal stenting and balloon atrial septostomy (BAS) represent palliative treatment options in severe, systemic-to-supra-systemic PH. These procedures decompress the right atrium (BAS) or the RV (reverse Potts shunt) and result in a hemodynamic situation that is similar to the physiology of Eisenmenger patients. However, only the reverse Potts shunt can prevent RV failure mid- to long-term, and—in contrast to BAS—preserves adequate preductal arterial oxygen supply to the upper body, including heart and brain (3-5). Reverse Potts shunt circulation is achieved by either surgical or interventional creation of a connection between the descending aorta and the pulmonary artery (PA), which secures sufficient cardiac output, at the expense of hypoxemia in the lower half of the body (3-5). Although reverse Potts shunt creation is recommended as palliation or bridge-to-transplantation in current guidelines on pediatric PH (6), its use has not been previously reported in young infants with severe PH associated with developmental lung disease.

Here, we report the first case of interventional creation of reverse Potts shunt by stenting a pre-existing ductus arteriosus (“endogenous” Potts shunt) in a female infant with severe PH associated with a compound heterozygous ABCA3 mutation and additional, possibly disease-associated heterozygous SFTPB and SFTPC variants. We present the following case in accordance with the CARE Guideline (available at http://dx.doi.org/10.21037/cdt.2020.03.11).

A term female infant (41+3 weeks of gestation, 3,540 g) presented with tachypnea and hypoxemia after spontaneous delivery. Echocardiography on the first day of life revealed a moderately elevated RV systolic pressure (RVSP) of 70–80 mmHg [RVSP 70 mmHg plus right atrial v wave, estimated by the maximum velocity of the tricuspid regurgitation (TR) jet by CW Doppler] and a small persistent foramen ovale, but no cardiac anomalies. The infant was diagnosed with persistent pulmonary hypertension of the newborn (PPHN) and admitted to the neonatal intensive care unit. She required respiratory support by continuous positive airway pressure for 60 hours and supplementary oxygen for 80 hours. Empiric antibiotic treatment with ampicillin and gentamicin was performed for 48 hours despite normal laboratory testing and chest X-ray results (Figure 1). The infant improved clinically and was discharged on day of life 7 in stable condition, with normal breathing and normal peripheral oxygen saturations. 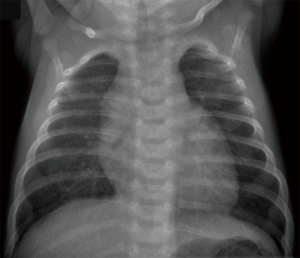 Figure 1 Chest X-ray on the first day of life. The chest X-ray did not indicate any specific pulmonary pathology.

In the following weeks of life, the parents recognized drinking difficulties and consulted their community-based pediatrician who noted moderate tachypnea and referred the infant for pediatric cardiology consultation. 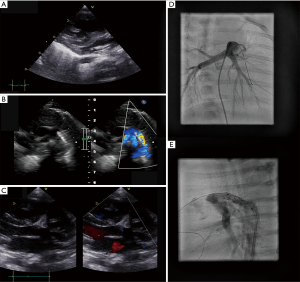 The PDA-stenting was well-tolerated and substantially improved echocardiographic variables of RV function. Blood flow direction through the stented ductus was right-to-left in systole, and left-to-right in diastole, indicating a diastolic PAP/SAP ratio of <1 and a PVR/SVR ratio of <1. TR, TAPSE and PAAT improved to grade 1, 12 mm, and 70 ms, respectively. In addition, end-systolic RV/LV diameter ratio and LV-EI decreased immediately after the procedure to 9.5 mm/7.3 mm and 1.9, and further improved after 1 week to 10.5 mm/8.5 mm and 1.4, respectively, indicating pressure-unloading of the RV and less end-systolic compression of the LV. Serum NT-proBNP levels decreased from 8,049 ng/L upon admission to 2,285 ng/L 3 days after PDA stenting. The 9-week-old infant (4.85 kg bodyweight) could be discharged on oral sildenafil, bosentan, L-arginine, magnesium, and nasal oxygen (1/min 100%). 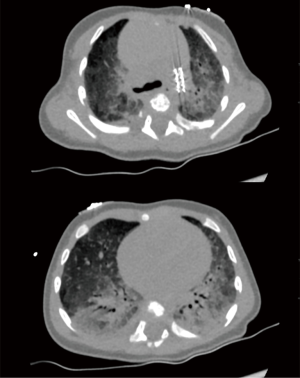 Herein, we report on the first creation of an endogenous Potts shunt by stenting a pre-existing, restrictive PDA in an infant with severe, supra-systemic PH and impending RV failure associated with developmental lung disease. There is an ongoing debate on the optimal management of infants with lung disease and PH (group 3 PH) (6). Pulmonary vasodilative therapy is often applied, but has not been systematically studied in this patient population (1), and the response to pharmacotherapy is very heterogeneous and usually limited (1,2). Furthermore, it is still unclear which factors determine the response to pulmonary vasodilators in infants with PH and lung disease due to a proven genetic mutation. The vast variety in both pheno- and genotypes in infants with genetic surfactant protein and/or ABCA3 disorders highlights the critical need for further research (7,8), including patient registries (9), in order to identify clinical and genetic determinants of treatment response and outcome.

Our case highlights that unexplained PPHN requires a close and timely cardiac follow-up to detect chronic PH of infancy. The etiology can be either idiopathic or due to several heart and lung diseases or systemic disorders (6). Early genetic testing might lead the way to suspect the correct, etiological diagnosis before more invasive testing, such as CT scans or lung biopsies, needs to be performed. In infants with supra-systemic PH, an attempt to pharmacologically reopen a (residual, flow-restrictive) PDA provides an elegant method to rapidly decompress a pressure-overloaded, failing RV. In infants with PH associated with interstitial and/or diffuse lung disease, the response to pulmonary vasodilative therapy is heterogeneous and often limited (1), thus making interventional procedures, such as reverse Potts shunt creation or BAS, attractive options as a palliation or as a bridge to transplantation (3,6,11).

In conclusion, we report the first interventional creation of an endogenous Potts shunt by ductal stenting, in an infant with severe PH associated with lung disease caused by a combined genetic disorder of surfactant metabolism and/or synthesis. Endogenous Potts shunt creation by stenting a pre-existing PDA is suitable for long-term management of even small infants with severe PH associated with lung disease. Certainly, further research on the optimal management of infants with PH associated with diffuse or interstitial lung disease is warranted in order to improve outcomes in this especially diverse and vulnerable patient population.

Provenance and Peer Review: This article was commissioned by the Guest Editors (Martin Koestenberger, Harm-Jan Bogaard and Georg Hansmann) for the series “Right Ventricular Dysfunction” published in Cardiovascular Diagnosis and Therapy. The article was sent for external peer review organized by the Editor-in-Chief and the editorial office.

Conflicts of Interest: All authors have completed the ICMJE uniform disclosure form (available at http://dx.doi.org/10.21037/cdt.2020.03.11). The series “Right Ventricular Dysfunction” was commissioned by the editorial office without any funding or sponsorship. The authors have no other conflicts of interest to declare.

Ethical Statement: The authors are accountable for all aspects of the work in ensuring that questions related to the accuracy or integrity of any part of the work are appropriately investigated and resolved. All procedures performed in studies involving human participants were in accordance with the ethical standards of the institutional and/or national research committee(s) and with the Helsinki Declaration (as revised in 2013). Parental written informed consent was obtained for publication of this manuscript and any accompanying images.