Pulmonary veno-occlusive disease (PVOD) is a rare and potentially life-threatening disease, occurring more frequently in children and young adults, but has been diagnosed also in elderly individuals. Höra first described the pathological features of the disease in an adult patient (1). Further reports confirmed common clinical and histological features which were different from classical pulmonary hypertension (2,3). The pathological hallmark of the disorder is progressive occlusion of the small pulmonary veins within the lobular septa by fibrous tissue and intimal thickening, in contrast to larger pulmonary veins which are rarely involved (Figure 1). There are also findings of patchy capillary proliferation. Lantuéjoul et al. suggested that pulmonary capillary hemangiomatous (PCH) is a reactive process, often secondary to PVOD, not always representing a specific entity (4). 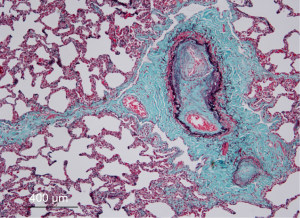 According to the most recent and updated classification (6th World Symposium on Pulmonary Hypertension, Nice 2018) PVOD is part of group 1, together with PCH and not a distinct subgroup as in previous classifications (5).

Substantial data on the natural history of PVOD are not available. The disease process usually shows rapid and steady progression, with very guarded prognosis which is worse than other forms PAH. In adult patients the mortality rate was estimated with 72% within 1 year of diagnosis (13). From a French registry it was suggested that the mean time from diagnosis to death or lung transplantation was approximately 1 year, whereas the mean time from first symptoms to death or lung transplantation was about 2 years (14). In a case report of an adult patient PVOD was diagnosed at autopsy, but typical signs on computed tomography had been noted earlier, leading to an over 15 years survival after initial presentation (15), despite the generally known poor prognosis of PVOD. The pediatric experience is a mean survival after diagnosis of approximately 14 months (12).

We attempted a search of pediatric patients with PVOD in the literature, using PubMed (“pulmonary veno-occlusive disease”, languages: English, French, German, Spanish, December 2019). We were able to identify a total of 68 of patients under 18 years of age. There are unfortunately limitations: not all authors provided a clear history of the patients, diagnostic tools used were different, not every diagnosis was confirmed by histology, outcome data are missing and patient data were used in multiple publications (Table 1).

Patients with PVOD may present with fatigue, decreased exercise tolerance, shortness of breath on exertion, cough, dizziness, chest pain with exercise, palpitations, syncope, but also nonspecific symptoms such as headache, poor appetite, pallor or perioral cyanosis, leading with disease progression to various manifestations of right heart and/or respiratory failure. There also a pediatric patient that presented with massive alveolar hemorrhage (17).

Wagenvoort et al. speculated that PVOD in a newborn developed on the basis of thrombosis prenatally (49), following similar contemporary concepts (3,50,51).

Initially PVOD was thought to be a sporadic disease, however, with time several reports suggested familial occurrence (18,40,47,52).

More recently mutations in the EIF2AK4 (eukaryotic translation initiation factor 2-alpha kinase 4) gene coding for a serine/threonine-protein kinase were found to be a main cause of heritable PVOD (53). In 13 affected families, 3 patients belonged to the pediatric age group. Variants of unknown significance were also associated in one patient with PVOD and mutations of the bone morphogenetic protein receptor type II (54).

The documentation of the mutations as a main reason for inheritable PVOD endorses the genetic basis of this type of pulmonary hypertension. Mutation identification will allow genetic counseling to be offered to families affected by the disease. These results also open new research avenues into the role of EIF2AK4 in pulmonary vascular remodeling and pave the way for innovative therapeutic strategies.

Possible risk factors for the development of PVOD include exposure to organic solvent and trichloroethylene (55), tobacco exposure (14), chemotherapy (including bleomycin, doxorubicin, epirubicin, methotrexate, vincristine, mitomycin-C and etoposide) (34,56-58) and/or radiation therapy (32,59).

Zinter et al. (60) highlight the increasing evidence for a wide spectrum of pulmonary vascular disease after pediatric hematopoietic stem cell transplant. While the majority of post hematopoietic stem cell transplant pulmonary vascular disease has been thought to be pulmonary arterial hypertension, PVOD must be considered as a differential diagnosis well. A recent publication reviewed children with pulmonary hypertension after bone marrow transplantation, however, only 3/22 patients underwent lung biopsy without histological findings of PVOD (61).

Other conditions more frequently occurring in adults than children have been linked with PVOD including scleroderma, pulmonary Langerhans cell histiocytosis, sarcoidosis and Hashimoto’s thyroiditis (62-69). However, an adolescent with antiphospholipid antibody syndrome was also diagnosed with PVOD (25). Muneuchi et al. described an infant with trisomy 21, which showed normal lung histology at 2 months of age and had developed PVOD at 5 months of age (37).

As PVOD causes pulmonary hypertension, echocardiography will be helpful to estimate right ventricular systemic pressure, provides information about right (and left) ventricular function, and rules out forms of congenital heart disease. Further diagnostic workup includes cardiac catheterization to confirm pulmonary hypertension and increased pulmonary vascular resistance with normal pulmonary capillary wedge pressure. The diagnosis of PVOD may be suspected based on clinical and radiologic data. The chest X-ray is of limited value, whereas high-resolution computed tomography reveals the typical findings (Figure 2): centrilobular ground-glass nodules or opacities, septal lines, thickened interlobular septa, mosaic perfusion, and lymphadenopathy (71-75). Pleural effusion is less consistently found (72). However, patients with idiopathic PAH and PAH associated with connective tissue disease may also present with similar findings. Other findings include fluid accumulation in airspaces and local alveolar collapse. Classic changes of PVOD may be more pronounced in certain areas of the lungs compared to others. 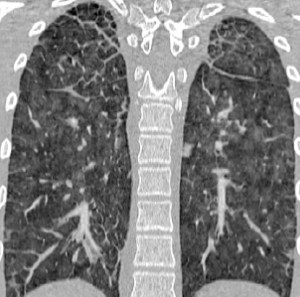 A recent study demonstrated that patients with EIF2AK4 mutation tend to have a higher frequency of mediastinal lymphadenopathy and interlobular septal thickening on computed tomography (76).

Definite diagnosis requires pathological evaluation. However, open lung biopsy which is necessary for the histologic analysis carries substantial risks in patients with pulmonary hypertension (79). Perioperative complications for children with pulmonary hypertension are known (80), hence, risks and benefits for the patient should be individually assessed. The non-invasive diagnostic approach may avoid the lung biopsy (81) and should include: very low DLCO, resting hypoxemia, severe desaturation with exercise, at least two characteristic radiological signs on high resolution computed tomography and occult alveolar hemorrhage on bronchoalveolar lavage. Hemosiderin-laden macrophages in the sputum of patients with PVOD is significantly higher compared to other forms of PH which may be used for non-invasive diagnostic work-up (82). Kano et al. reported on an 11-year-old girl with hypoxia and abnormal chest radiographic findings, centrilobular ground-glass opacities on computed tomography, macrophages consisting mainly of hemosiderin-laden cells, diagnosed and treated for interstitial lung disease, and a postmortem diagnosis of PVOD (28).

Ogawa et al. developed a score including representative parameters (clinical data and radiological findings) which may be useful to establish an early clinical diagnosis (84). However, this has not been used or validated in children.

Lung transplantation is currently the only treatment option for patients with PVOD. As the waiting time for organs may be prolonged, mechanical support could be considered. Extra-corporeal membrane oxygenation (85) (venoarterial or venovenous) may help with oxyenation without or with atrial septostomy (unloading the right ventricle) but has limitations due to potential complications (bleeding, infection). More recently the iLA Membrane Ventilator (Xenios, Germany) has been used with cannulation of the pulmonary artery and right pulmonary vein, using the right ventricle as the pump with the device outside of the body (86).

The experience with the use of pulmonary hypertension targeted treatment is limited. Hoeper et al. (87) documented that inhaled nitric oxide and aerosolized iloprost had almost no effect on pulmonary arterial pressure but caused significant increase of cardiac output and a drop in pulmonary vascular resistance, suggesting at least regional vasodilation. Interestingly they also found a clear improvement in gas exchange, most likely triggered by several, but not clearly identified pathways.

There are reports were pulmonary vasodilators have improved clinical status of patients (13,88-90), others have warned that pulmonary vasodilators can cause considerable pulmonary edema in patients with PVOD (75,91-93). Day et al. (20) reported targeted PH therapy in pediatric patients before radiographic evidence of PVOD and PCH without development of pulmonary edema. However, in a single center experience, cautious use of epoprostenol improved exercise capacity in adult patients, but did not significantly reduce mean pulmonary arterial pressure (39). In a systematic review, the same group was unable to draw firm conclusion in the absence of randomized controlled trials with sufficient numbers of patients. Analyzing published case reports they suggested that vasodilator use may be effective in improving 6-minute walk distance, pulmonary vascular resistance, and survival in some patients, but they also highlighted the risk of pulmonary edema in many cases (94). Randomized controlled trials are lacking for patients with PVOD, hence the benefit of medical therapy with proven efficacy needs to be further evaluated. Genetic disposition may also play a role. Liang et al. reported on a favorable response to PAH-targeted therapy in a PVOD patient with biallelic EIF2AK4 mutation (95).

Case reports of adults with suspected PVOD by imaging implied improvement with sorafenib, a multikinase inhibitor (96) and imatinib a tyrosine kinase inhibitor (97,98). Nifedipine seemed to have positive impact in an adult patient as well (99).

High-dose diuretics and supplemental oxygen may be used, whereas there is no proposed recommendation for anticoagulation or immunosuppressive therapy (81).

For adult patients, Wille et al. (100) suggest early referral for possible lung transplantation which could be considered for pediatric patients as well because of rapid disease progression and a higher risk for death while on the lung transplant waiting list.

In summary, distinguishing PVOD from other forms of pulmonary hypertension or chronic thromboembolic diseases is important, using all appropriate diagnostic tools. Medical treatment is limited with lung transplantation as a valid option.

Provenance and Peer Review: This article was commissioned by the Guest Editors (Christian Apitz and Astrid Lammers) for the series “Pediatric Pulmonary Hypertension” published in Cardiovascular Diagnosis and Therapy. The article has undergone external peer review.

Conflicts of Interest: Both authors have completed the ICMJE uniform disclosure form (available at http://dx.doi.org/10.21037/cdt-20-320). The series “Pediatric Pulmonary Hypertension” was commissioned by the editorial office without any funding or sponsorship. The authors have no other conflicts of interest to declare.