Aortopathy is a common phenomenon associated with congenital heart disease (CHD). The current literature considers coarctation of the aorta, bicuspid aortic valve, tetralogy of Fallot (TOF), pulmonary atresia with ventricular septal defect (VSD) and truncus arteriosus to be the most important patient groups regarding the development of aortopathy, apart from genetic syndromes and secondary aortopathy is often seen after surgical repair including the Ross operation (1). TOF is considered to be the most common cyanotic CHD, which is described as the co-occurrence of pulmonary stenosis, VSD, right ventricular (RV) hypertrophy and for the current study most importantly overriding aorta (2). Aortic dilation in TOF is widely described, and has been formerly associated with volume overload due to haemodynamic alterations in unrepaired TOF (1). However, it is increasingly discussed that even late after surgical correction, abnormal dimensions and impaired elastic properties may be found in the ascending aorta in corrected TOF (cTOF) (3). Further histopathologic studies have confirmed that there are intrinsic abnormalities in the aortic wall, which may be the cause of progressive aortic dilation and elastic abnormalities (4). In recent two-dimensional (2D) speckle-tracking echocardiographic (STE) studies, during left ventricular (LV) strain analyses significant abnormalities in LV deformation could be detected in cTOF (5). It is known that strong relationship exists between aortic and LV function called aorto-ventricular coupling. According to recent findings, aortopathy is thought to negatively influence LV function in CHD (6).

TOF patients are generally classified in two distinct subgroups regarding surgical strategies. Either early palliative surgery (creating artificial left-to-right shunts to provide adequate pulmonary blood flow) is performed first, with late total reconstruction (pcTOF), or an early total reconstruction (etrTOF) is performed (7). The present study was designed to detect subtle alterations of LV deformation in cTOF using the novel three-dimensional speckle-tracking echocardiography (3DSTE). Detailed comparative analysis of LV deformation between pcTOF and etrTOF patients was also aimed to be performed. It was also purposed to find any correlation between LV deformation and aortic elastic properties in the subgroup of cTOF patients. We present the following article in accordance with the STROBE reporting checklist (available at http://dx.doi.org/10.21037/cdt-20-366).

In our department a registry was created to collect data of CHD patients treated and/or operated on at the Department of Pediatrics, Department of Heart Surgery, and 2nd Department of Medicine and Cardiology Center at the University of Szeged, Hungary since 1961. This is called the Registry of C(S)ONGenital caRdiAc Disease patients at the University of Szeged (CSONGRAD Registry), which involves data of more than 3,000 CHD patients (8). Twenty-eight adult cTOF patients were involved in the present study who were followed-up with the help of CSONGRAD Registry, and who had repair at the age of 6.04±3.83 years. Of these patients, 15 underwent early palliative surgery [Blalock-Taussig (n=10), Waterston-Cooley (n=3) shunts, or Brock procedure (n=2)] and late total correction (pcTOF), while early total reconstruction was the treatment of choice in 13 cTOF patients (etrTOF). Their clinical parameters were compared to those of 39 age- and gender-matched healthy adults. All patients and controls underwent routine transthoracic 2D Doppler echocardiography extended with 3DSTE. The present work is part of the MAGYAR-Path Study (Motion Analysis of the heart and Great vessels bY three-dimensionAl speckle-tRacking echocardiography in Pathological cases), which was organized partly to examine CHD-related 3DSTE-derived parameters. All cTOF patients and control subjects gave informed consent. The institutional human research committee approved the study which complied with the 1975 Declaration of Helsinki (registration number: 71/2011).

After 10 minutes of rest, patients were placed in a supine position, and with the cuff applied to the right arm, systolic and diastolic blood pressures (SBP and DBP, respectively) were measured. The first and fifth Korotkoff sounds were considered to indicate SBP and DBP. Patients did not consume caffeinated drinks or cigarettes before blood pressure measurements (10).

During standard transthoracic echocardiographic examination, ascending aortic diameters were recorded in parasternal long-axis view with M-mode 3 cm above the level of the aortic valve. Systolic and diastolic aortic diameters (SD and DD) were measured at the maximum of the anterior motion of the aorta, and the peak of the QRS (Figure 1). Measurements were repeated 3 times and averaged. Aortic elastic properties have been calculated with the formulae bellow (10): 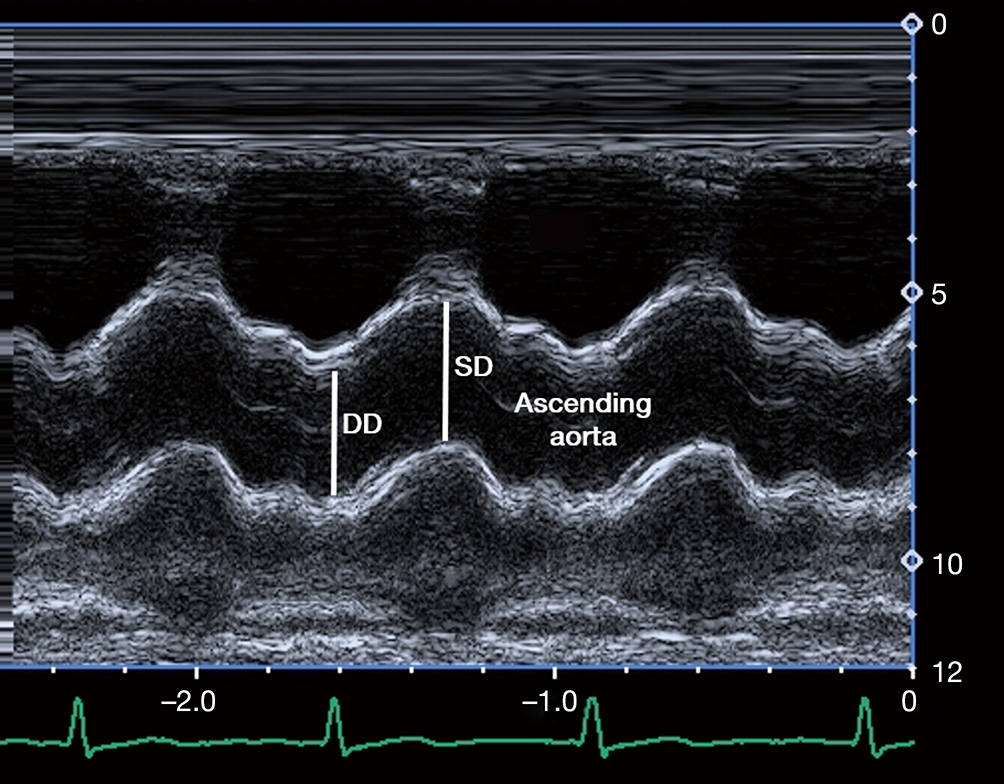 Figure 1 Measurements of systolic (SD) and diastolic (DD) diameters of the ascending aorta are presented in an M-mode echocardiographic image obtained 3 cm above the aortic valve.

3DSTE studies were also performed with the same Toshiba ArtidaTM echocardiography system (Toshiba, Tokyo, Japan) using a 1–4 MHz matrix phased-array PST-25SX transducer placed in an apical window. The full pyramid-shaped dataset was created from 6 wedge-shaped subvolumes acquired with RR interval monitored by electrocardiogram (ECG) if remained the same. Quantification was performed using 3D Wall Motion Tracking software version 2.7 (Toshiba Medical Systems). At end-diastole, apical two- (AP2CH) and four-chamber (AP4CH) views and 3 short-axis views at different LV levels were automatically reconstructed from the acquired 3D echocardiographic cloud. The region of interest was then manually marked on the AP2CH and AP4CH views, with two points at the bases of the LV at the edges of the mitral annulus, and one at the endocardial surface of the LV apex (Figure 2). The reconstructed LV endocardial surface was then tracked during the cardiac cycle. 3DSTE-derived global and segmental LV radial (RS), circumferential (CS), longitudinal (LS), 3D (3DS) and area (AS) strains were generated by the software (11). 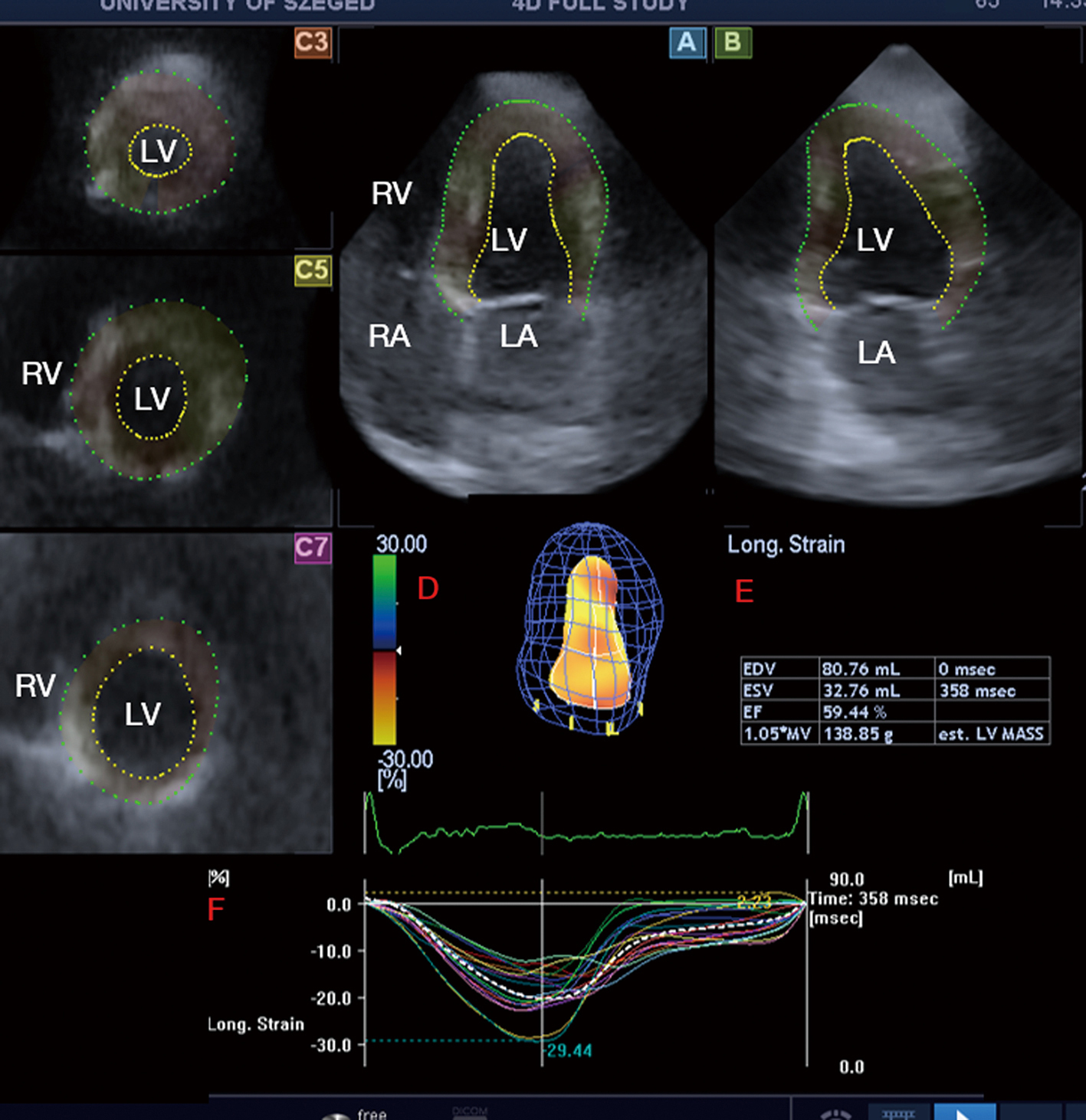 Continuous variables are reported as mean values ± standard deviation, while categorical data are summarized as frequencies and percentages. Comparisons were performed with Student t-test, χ2 test, and Fisher’s exact test, when appropriate. Statistical significance was considered when the p value proved to be less than 0.05. Pearson’s formula was used to determine numerical correlations. For statistical analysis Medcalc software (MedCalc, Mariakerke, Belgium) was used. 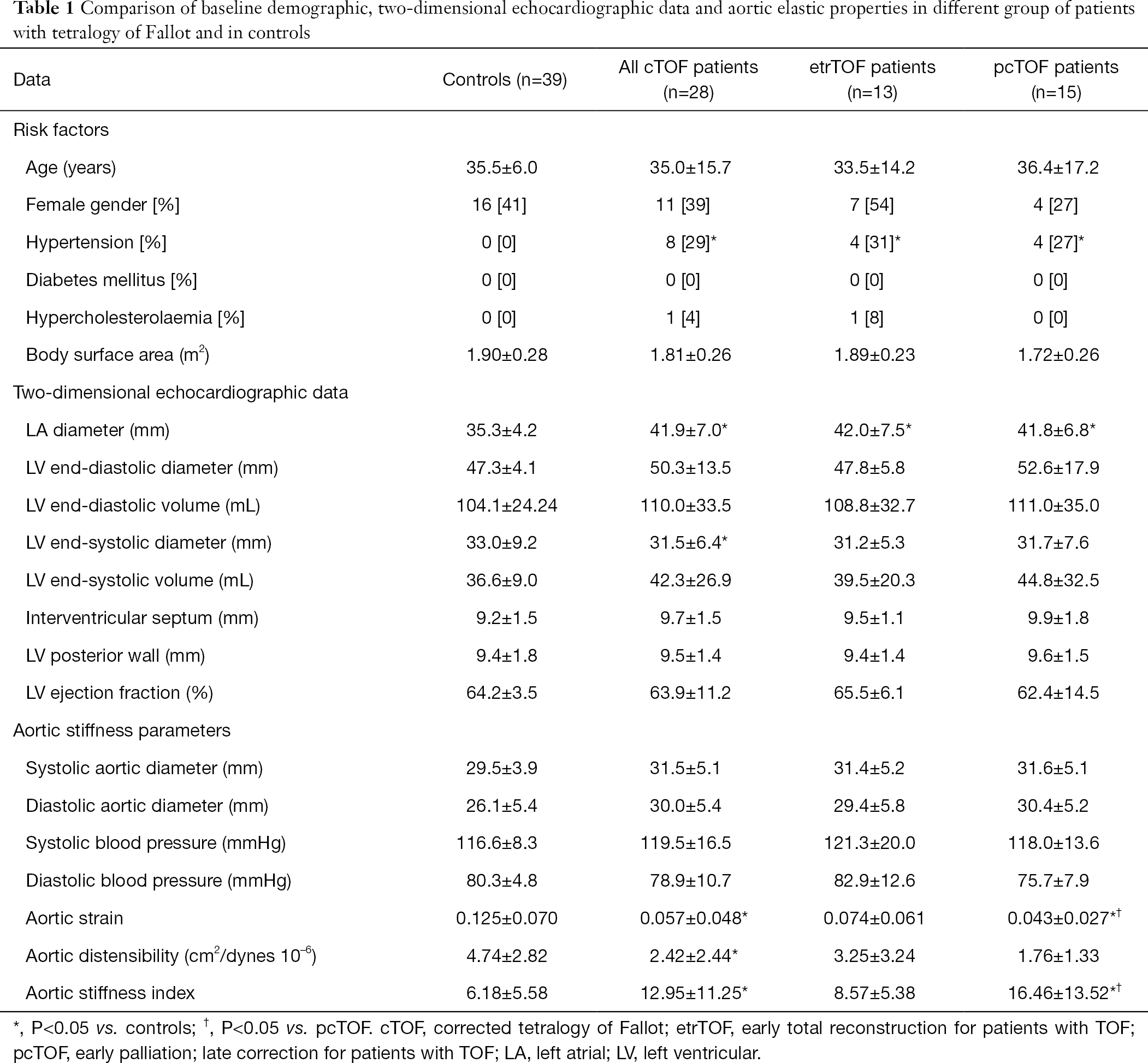 Table 1 Comparison of baseline demographic, two-dimensional echocardiographic data and aortic elastic properties in different group of patients with tetralogy of Fallot and in controls
Full table

Of the standard 2D echocardiographic parameters, LA diameter proved to be significantly larger in cTOF patients regardless of the treatment method. LV dimensions and function (except for LV end-systolic diameter) did not differ significantly between the groups examined (Table 1).

Aortic dimensions were somewhat dilated, AS and AD were reduced, while ASI proved to be increased in cTOF patients as compared to controls. When patients with different treatments were compared, etrTOF patients showed more beneficial aortic elastic properties compared to those of pcTOF patients.

For all cTOF patients 3DSTE-derived LV end-systolic volume (ESV) was higher and LV-EF proved to be lower as compared to controls. Subgroup analysis showed that pcTOF patients had significantly larger LV-ESV and lower LV-EF than controls and etrTOF patients (Table 2). 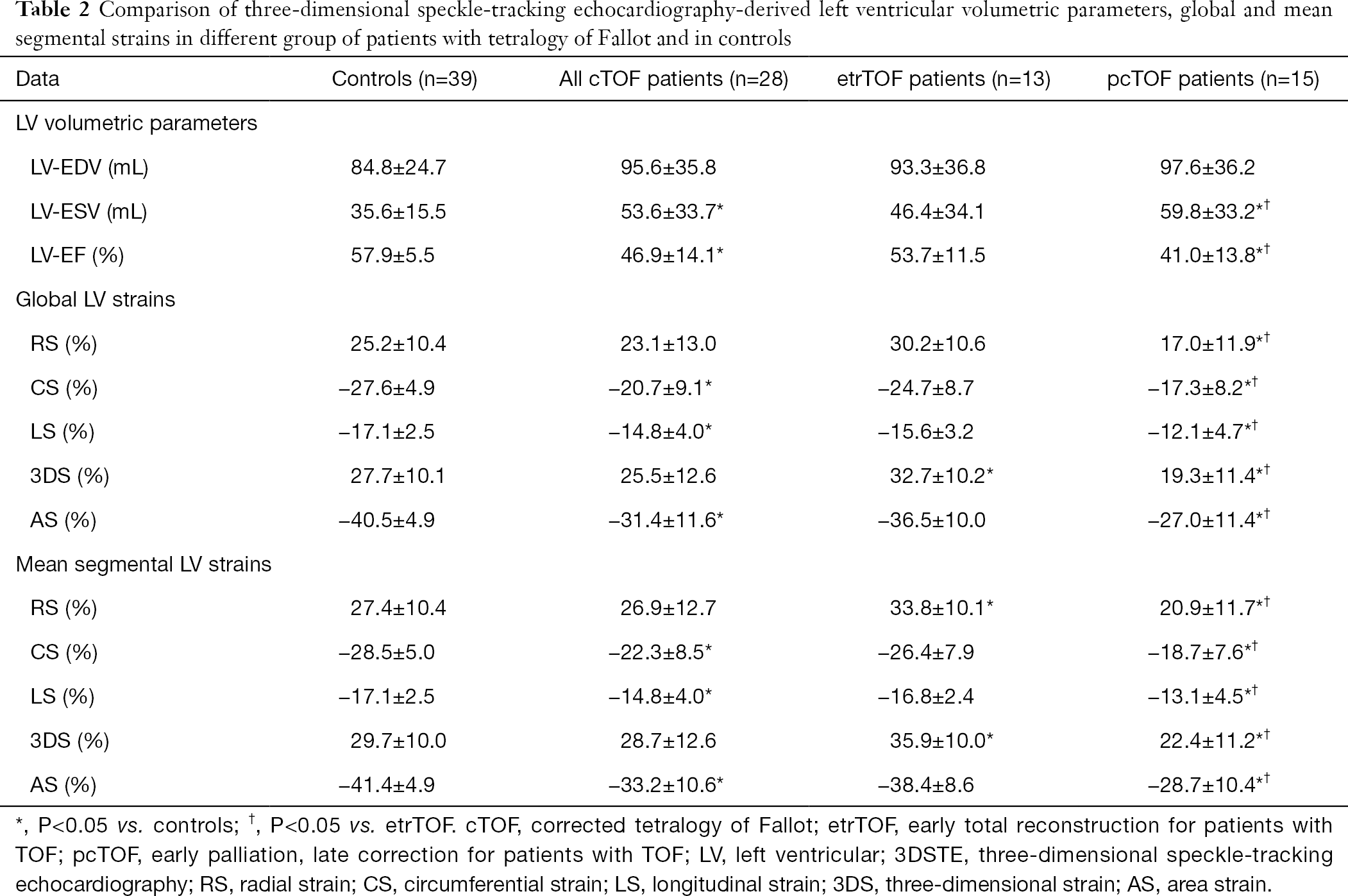 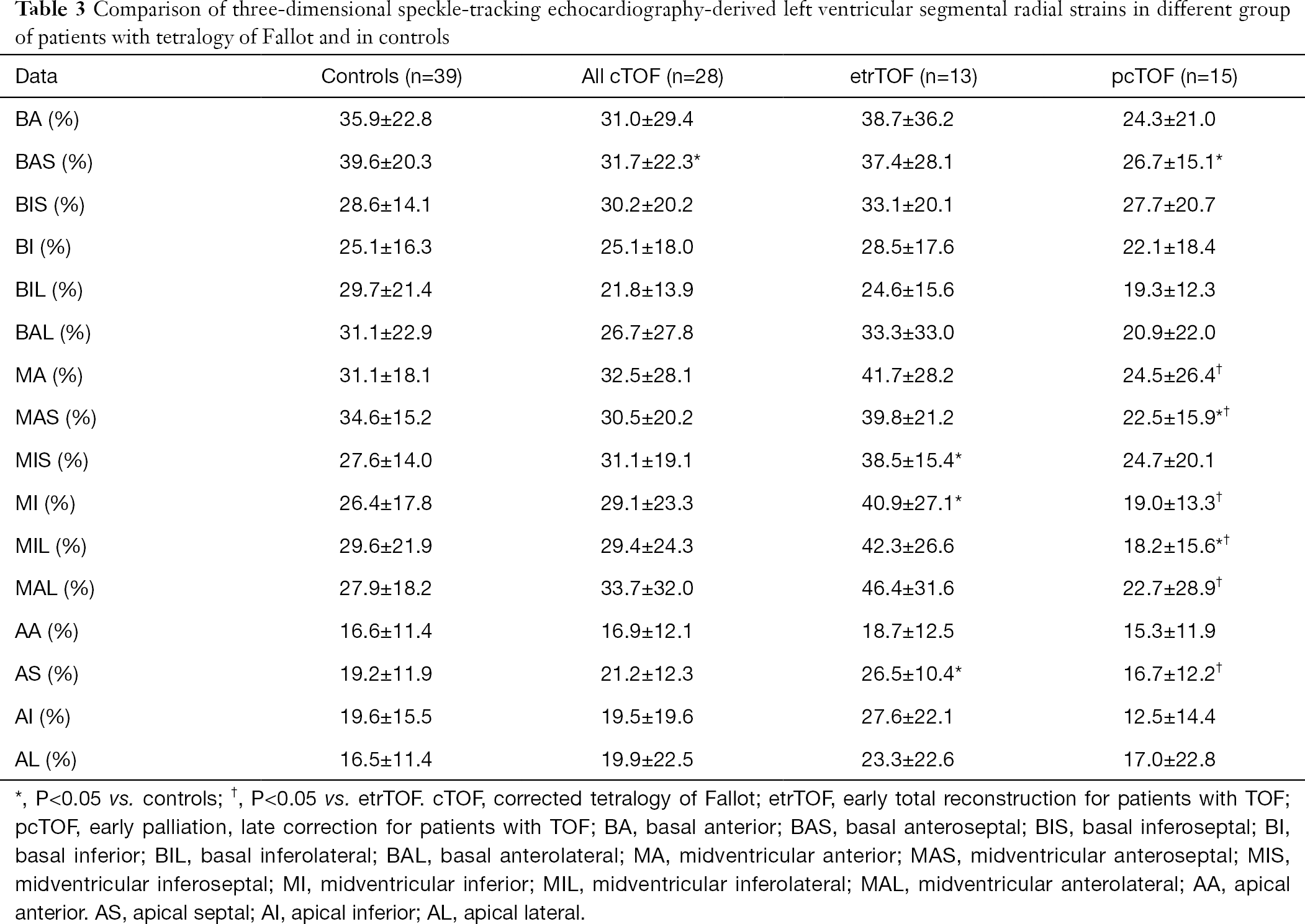 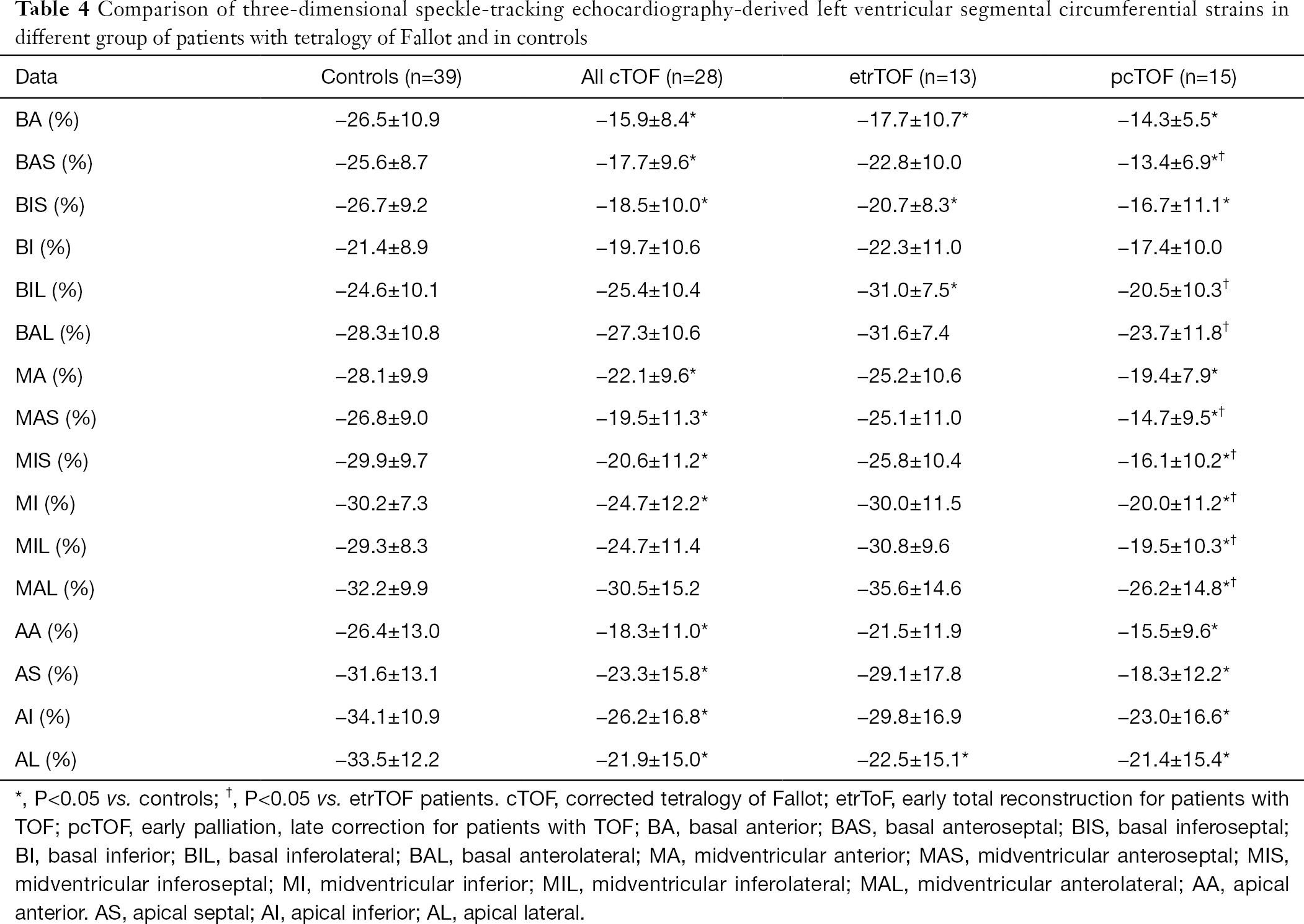 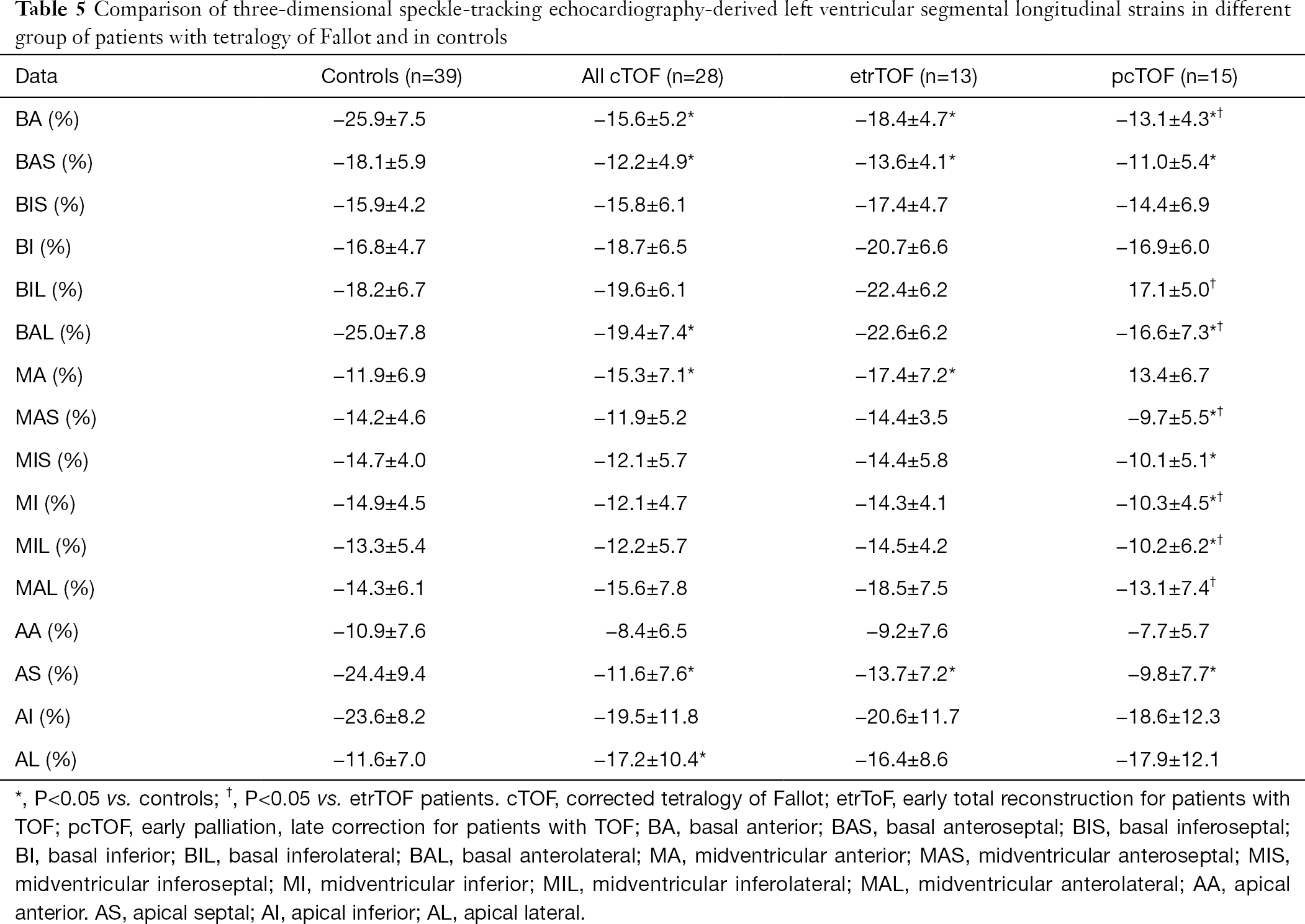 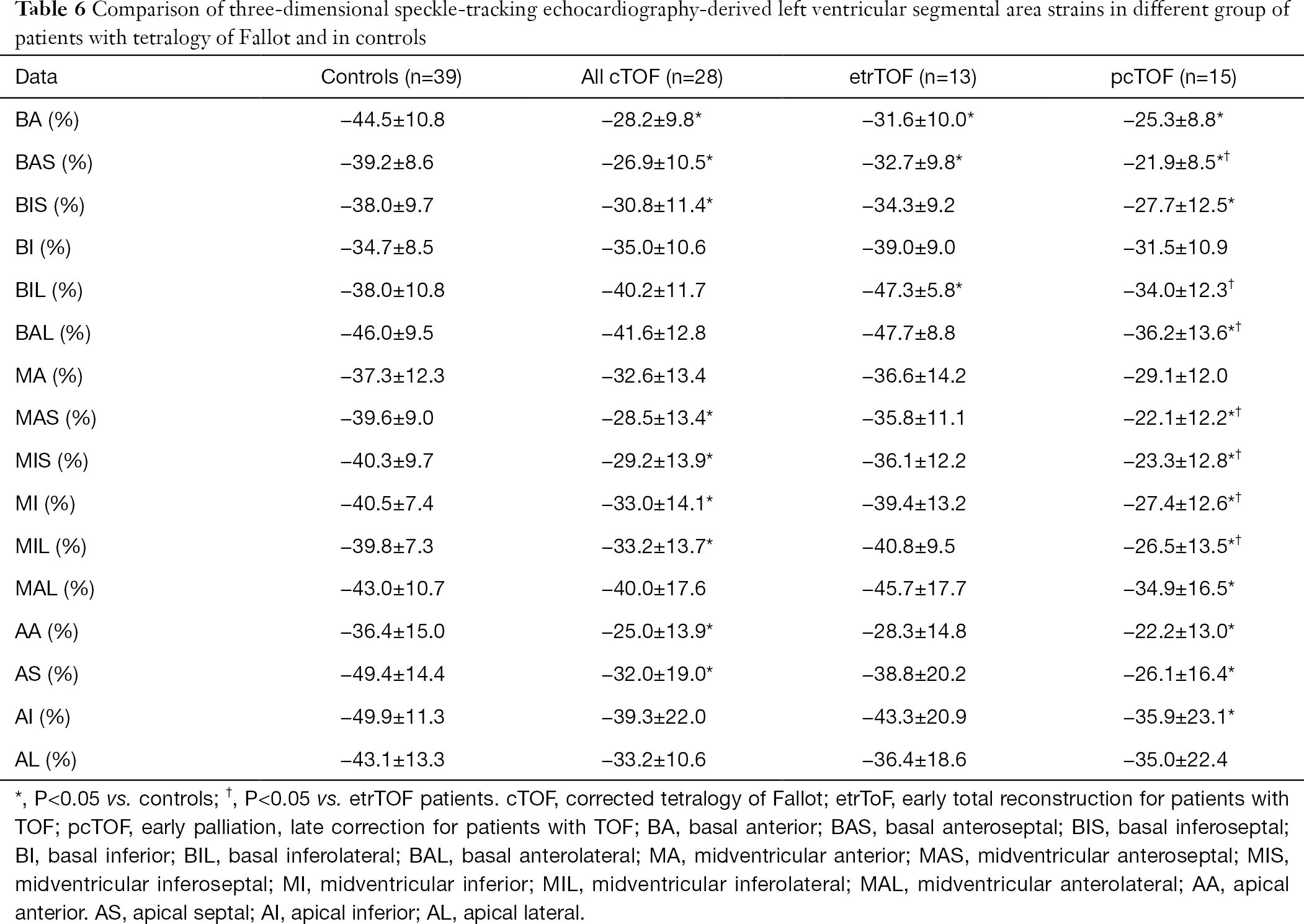 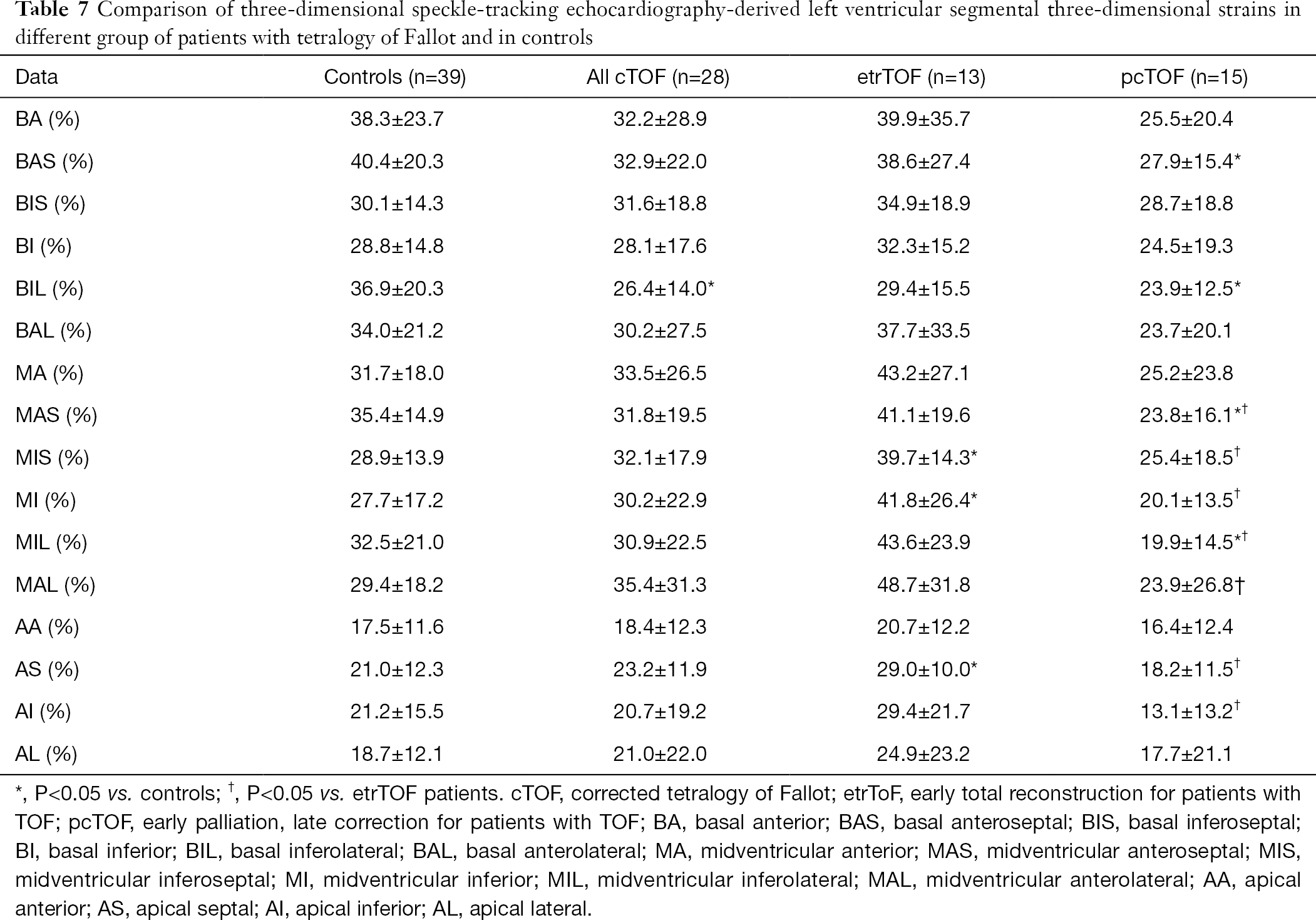 Correlation coefficients between 3DSTE-derived strains and aortic elastic properties are demonstrated in Table 8. In all cTOF patients, several moderate correlations could be detected between LV strain parameters and aortic elastic properties. The subgroup analysis showed moderate correlations between LV-CS, LV-LS and LV-AS and AD in etrTOF patients. In pcTOF patients, only LV-RS correlated with aortic strain and LV-CS with ASI. 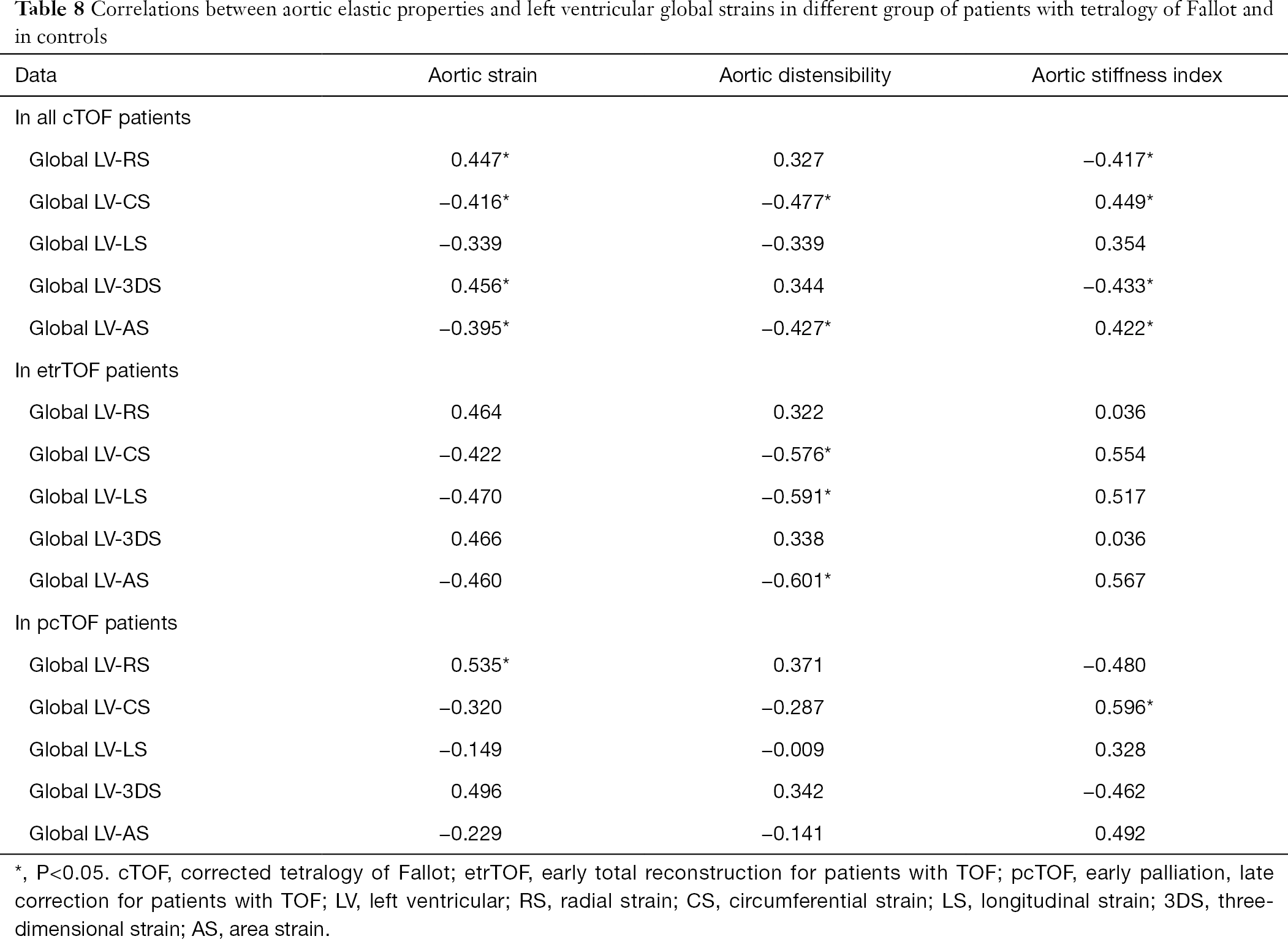 To the best of the authors’ knowledge, the relationship between 3DSTE-derived LV strains and aortic elastic properties has not been simultaneously examined, and their correlation has never been investigated in cTOF patients. Theoretically cardiovascular risk factors could have effects on LV deformation and aortic size and function at the same time. However, there are interactions between the LV and the arterial system as well called ventricular-arterial coupling, the LV and the arterial system has effects on each other. In recent studies, aortic elasticity properties showed correlations with LV-CS and LV rotational parameters even in healthy subjects (12,13). It has already been demonstrated that cTOF—even with preserved LV-EF—exhibits reduced global LV-LS and LV-CS measured by 2DSTE. This suggests that there is an underlying subclinical LV damage even after surgical repair (5). Furthermore, it has also been found that abnormal global LV-LS and RV-LS and LV rotation are associated with adverse cardiovascular events, highlighting the potential clinical usefulness of STE-derived parameters determining prognosis, and finding which patients are at high risk (14). Aortic dilation is also a known abnormality in cTOF, which is associated with higher ASI (3). This was confirmed by both M-mode echocardiography- and novel 2DSTE-derived aortic stiffness parameters (15).

Our results confirm previous studies describing that cTOF is associated with impaired LV deformations (16,17). Importantly, not only the widely used 2DSTE-derived LV-LS proved to be the most robust. LV-AS, and most notably LV-CS are significantly impaired in cTOF patients, highlighting the clinical significance of 3DSTE having the capability of simultaneous assessment of all LV strain values at the same time from the same 3D dataset in complex CHDs. Interestingly, patients who underwent early total correction for TOF (etrTOF) have mostly preserved global, mean segmental, and regional strains, with mean segmental LV-RS and LV-3DS being supernormal in certain cases. These supernormal values might be part of a preclinical compensatory mechanism before manifest deterioration of LV function, but to confirm these suspicions, longitudinal studies are warranted. Another important finding is that for cTOF patients with early palliation-late correction (pcTOF), all global and mean segmental strain values were mostly significantly reduced compared to both controls and etrTOF subjects. For segmental strains, these differences were similarly present. A notable finding in segmental strain analysis is that mostly septal segments had significantly lower LV strains in pcTOF patients. This finding is most likely explained by the nature of TOF, the longer presence of the VSD, and the interventricular septal patch. Correlations could also be presented in cTOF patients between LV strains and aortic stiffness parameters, and those correlations were present during subgroup analysis, as well. These results confirm strong effects of ventricular-arterial coupling in these patients in spite of the above presented abnormalities.

There are some limitations the authors consider important to take into account when interpreting results:

Reporting Checklist: The authors have completed the STROBE reporting checklist. Available at http://dx.doi.org/10.21037/cdt-20-366

Conflicts of Interest: All authors have completed the ICMJE uniform disclosure form (available at http://dx.doi.org/10.21037/cdt-20-366). The series “Current Management Aspects in Adult Congenital Heart Disease (ACHD): Part III” was commissioned by the editorial office without any funding or sponsorship. The authors have no other conflicts of interest to declare.

Ethical Statement: The authors are accountable for all aspects of the work in ensuring that questions related to the accuracy or integrity of any part of the work are appropriately investigated and resolved. All cTOF patients and control subjects gave informed consent. The institutional human research committee approved the study which complied with the Declaration of Helsinki (as revised in 2013) (registration number: 71/2011).