Abernethy malformation of the portal vein results in diverting portal venous blood flow towards the inferior vena cava (IVC) bypassing the hepatic parenchyma (1,2). Patients may develop hepatic failure, hyperammonemia, hepatic encephalopathy, or hepatopulmonary syndrome among other complications (1,3). In hepatopulmonary syndrome, associated with pulmonary arteriovenous fistulae, cyanosis may be one of the main manifestations. In children with complex congenital heart disease (CHD), especially in those with malformations of the right heart and limited pulmonary blood flow, cyanosis is a frequent symptom. After corrective heart surgery, cyanosis is usually interpreted as a symptom of limited pulmonary blood flow improving slowly as pulmonary arteries are growing (4). We report on an infant with CHD in whom, after cardiac surgery, cyanosis was not related to the underlying disease. A thorough investigation led to the diagnosis of an Abernethy malformation type II with two variants of anatomical connections—an interrupted IVC and azygos continuity and a left renal vein connected to the dilated portal vein. To the best of our knowledge, this is the first report of an infant with CHD and an Abernethy malformation type II with two variants of anatomical connections, successfully treated percutaneously with a Konar MF™-VSD Occluder. This case report is written in accordance with Care Guideline (available at http://dx.doi.org/10.21037/cdt-20-380).

A 7-months old boy (5.95 kg, 72 cm) was admitted to the hospital, two months after corrective heart surgery, for low weight gain, tachydyspnea and progressing cyanosis [peripheral oxygen saturations (SpO2) 83–87%] (Tables 1,2). The patient was born with heterotaxy syndrome, Fallot-type double outlet right ventricle, ventricular septal defect (VSD), atrial septal defect and subvalvular and valvular pulmonary stenosis. Anatomical correction was performed with 5 months of age. On the admission the SpO2 improved with oxygen supply and the chest X-ray was suggestive for pulmonary overcirculation. Transthoracic echocardiogram showed good postoperative result without intracardiac right-to-left shunt explaining the cyanosis of the patient. A diagnostic cardiac catheterization was performed. Blood gas samples from the right pulmonary veins showed an oxygen saturation of 100%. The left pulmonary veins were however significantly desaturated (70% and 84%). Angiographies excluded intracardiac right-to-left-shunt and showed multiple left pulmonary arteriovenous fistulae with an atypical pulmonary vascular pattern, a diffusely dilated pulmonary vascular bed and accelerated pulmonary blood-passage (Figure 1). A CT-scan showed thoracal bilateral left-sidedness, interrupted IVC with a prominent azygos vein draining in the superior vena cava, polysplenia and a bilobed liver connected to a dilated portal vein (diameter of 9 mm) which, in its intrahepatic course, appeared to be hypoplastic (diameter 2 mm). The diagnosis of an Abernethy malformation type II (hypoplastic portal vein with portal blood diversion into the IVC through a side-to-side extrahepatic communication) was made (Figure 2). However, in this patient two variants of anatomical connections were present, first as there was an interrupted IVC and azygos continuity, the dilated portal vein was connected to the azygos vein. Second, the left renal vein was connected to the dilated portal vein. As a consequence of the portosystemic shunt through the Abernethy malformation, the patient had developed a hepatopulmonary syndrome, resulting in intrapulmonary arteriovenous fistulae with right-to-left shunt leading to cyanosis and dyspnea. 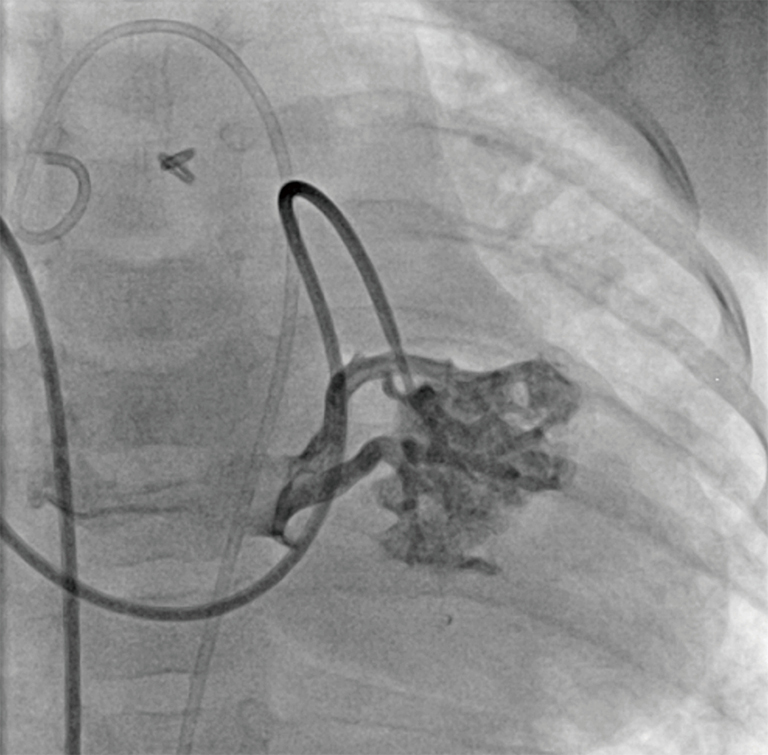 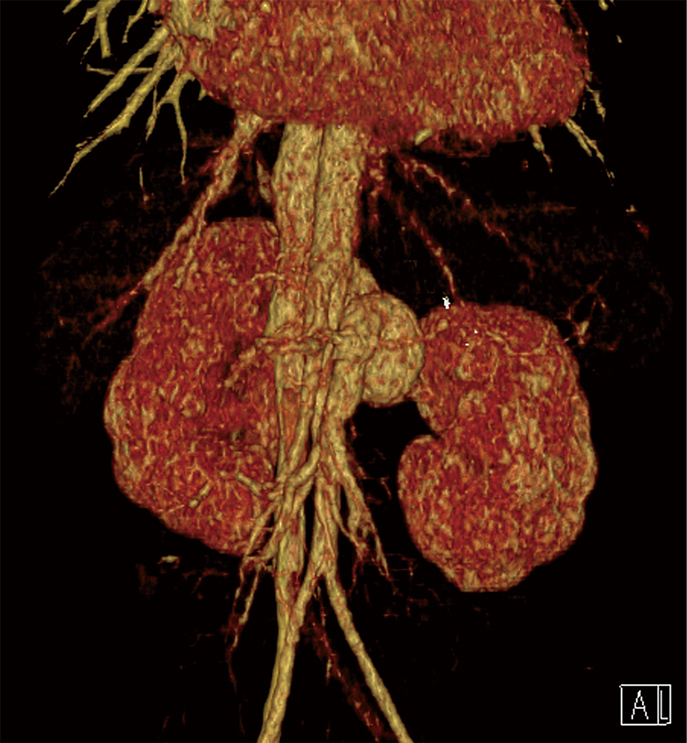 A cardiac catheterization was scheduled to close the malformation. The patient’s parents provided written informed consent for the procedure. SpO2 was 60% (Figure 3). From a transjugular approach, a diagnostic catheter was advanced into the azygos vein and the Abernethy vessel. Angiography confirmed the anatomy of a 10 mm-wide tortuous portal vein. Test-balloon occlusion showed a portal vein pressure of 14 mmHg, and selective contrast injection during balloon occlusion revealed drainage of the splanchnic veins and of the splenic vena into the distal part of the vessel, whereas the left renal vein drained into the proximal part of the siphon-like portal vein close to its connection to the azygos vein. The intrahepatic segment of the portal vein opened nicely during selective injection (Figure 4). A 14/12 mm device designed for VSD-closure (Konar MF™-VSD Occluder, Lifetech Scientific Inc., Shenzhen, China) was successfully implanted through a 7F sheath between the connections, diverting the splanchnic venous blood flow towards the intrahepatic segments of the portal vein and preserving the renal vein connection (Figure 5). In our case, there were no complications during the procedure. However, regarding adverse/unanticipated events, one of the main ones is the embolization or malposition of the device. Therefore, in this case, we chose a device attached to a flexible delivery wire which allowed a precise placement with minimal movement or distortion during the release. After the intervention, the patient showed rapid improvement with the SpO2 returning gradually to normal levels. One month after the procedure the SpO2 was 95%. On the latest follow-up the patient was clinically and hemodynamically stable, presenting a good growth development and a SpO2 of 95%. 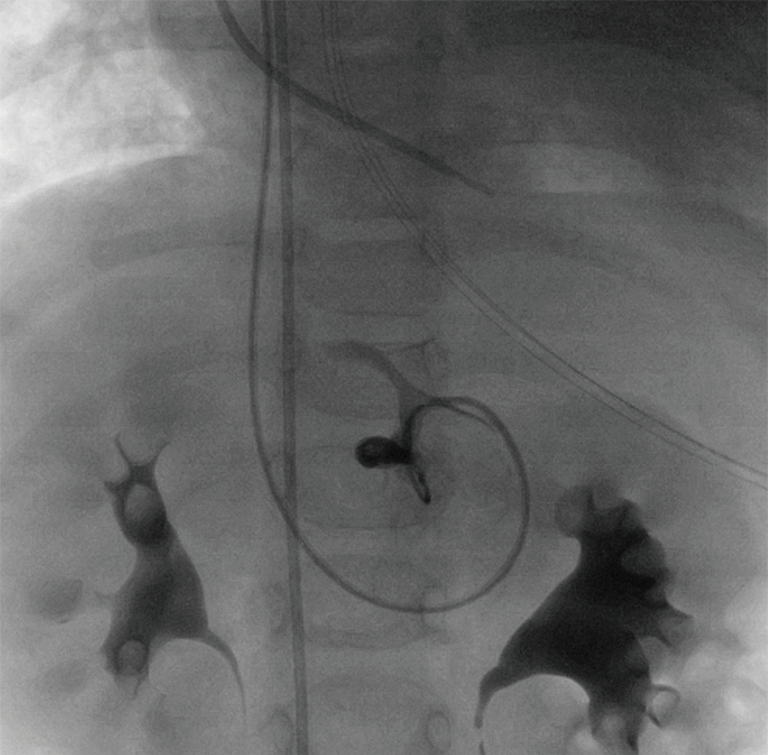 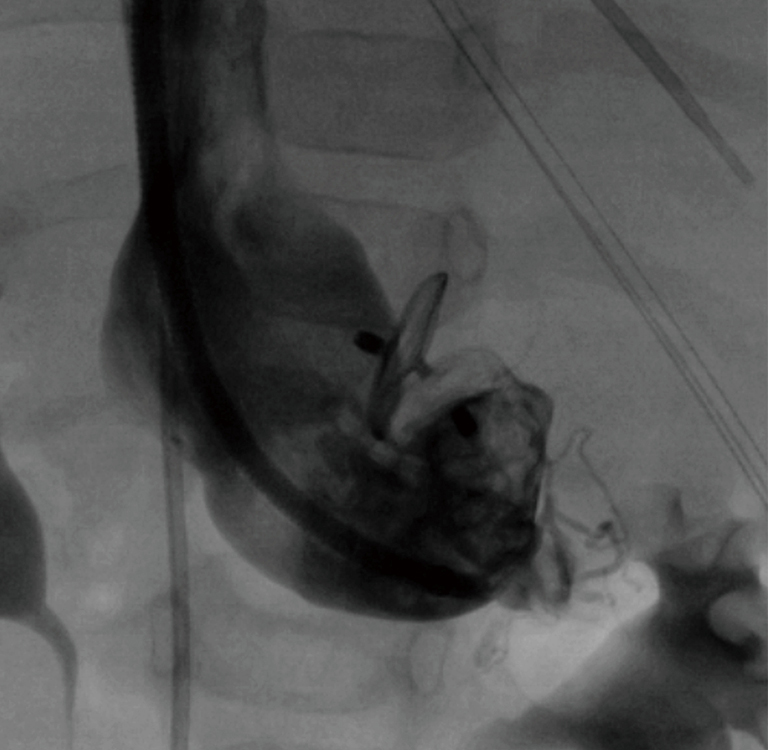 Figure 5 Interventional closure of the portosystemic shunt with a 14/12 mm Konar MF™-VSD Occluder.

Abernethy malformation comprises rare malformations of the portal vein system with absent (Type I) or hypoplastic (Type II) intrahepatic portal veins (2) (Figure 6). So far, only few cases have been described (5). Hyperammonemia, hepatic failure and hepatic encephalopathy appear as a consequence of the bypass of the portal venous blood from the hepatic parenchyma (1). This malformation was also associated with hepatopulmonary syndrome, which defines patients with hepatic failure and progressive pulmonary cyanosis due to pulmonary vascular changes leading to diffuse arteriovenous fistulae (3). As the experience in patients with Abernethy malformation and hepatopulmonary syndrome is limited, treatment strategies must be tailored on a case-by-case basis (6). In general, patients with hepatopulmonary syndrome showed improvement of cyanosis when the hepatic function was restored or the portosystemic shunt was abolished (7). Adult patients with small shunts are amenable to interventional procedures such as device closure (8), while small children are usually selected for surgical ligation of the portosystemic shunt or orthotopic liver transplantation (7,9). Only occasional cases of transcatheter closure of the shunting vessel at a pediatric age were reported (10). 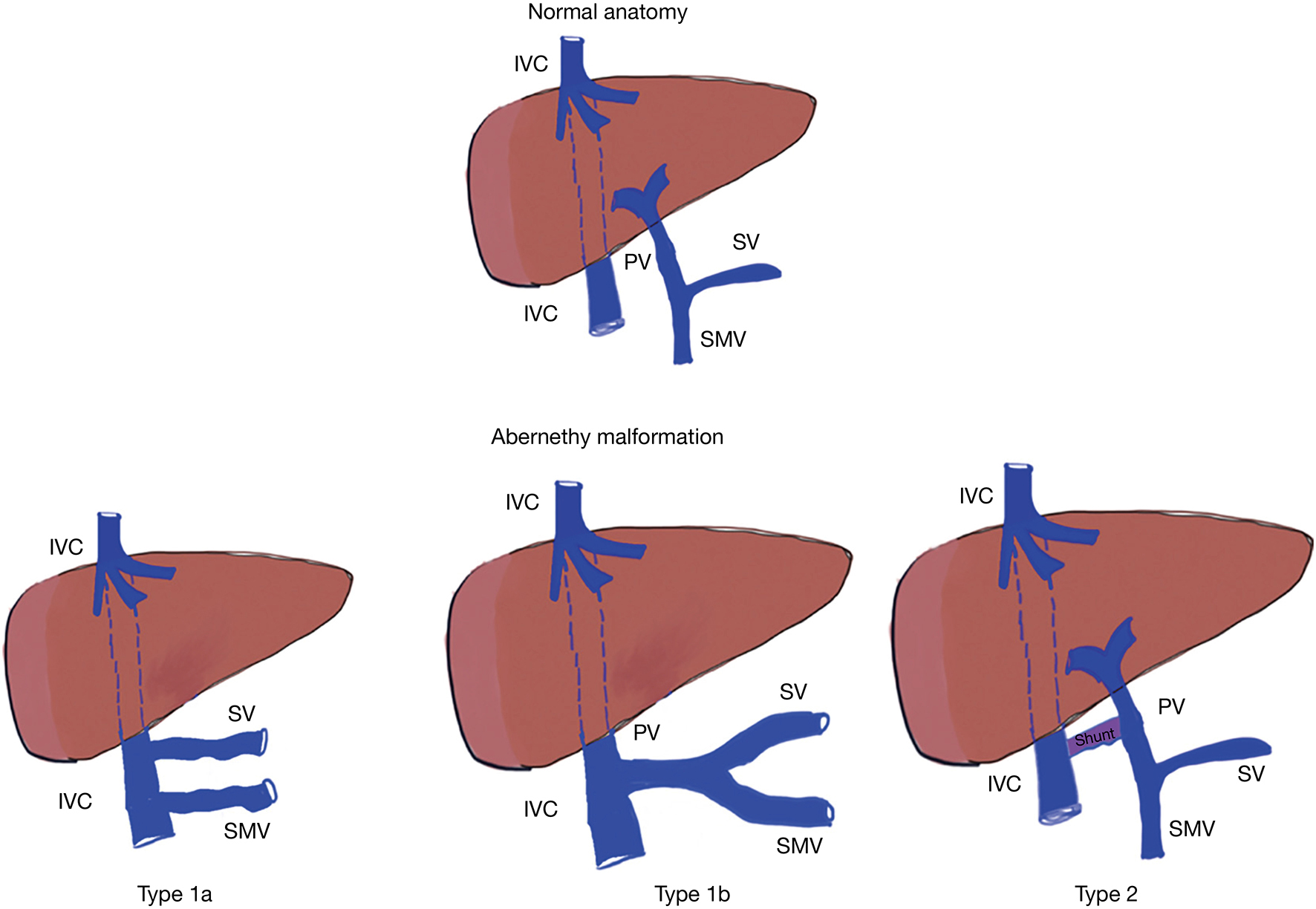 Our patient presented a large portosystemic shunt to the azygos vein and an anatomic variant of a left renal vein connected to the portal vein. In this case, the clinical condition of the patient showed a rapidly worsening, so a timely closure of the Abernethy malformation was mandatory. A percutaneous approach was chosen, although the feasibility of interventional closure could be doubtful, as that the occluder had to be placed exactly between the connections of the splanchnic and the renal veins. A transjugular access was required as there was continuity of the azygos vein and therefore the portal vein had to be entered in a cranio-caudal direction. As mentioned in previous publications, a wedge pressure recording of the portal venous system over a certain period of time is mandatory in a hypoplastic intrahepatic portal vein system (8). In this case, during balloon occlusion the portal vein pressure remained unchanged at 14 mmHg. A Konar MF™-VSD Occluder was chosen for the procedure. This device is relatively short, has a small rim, a waist length of 4mm and is attached to a flexible delivery wire allowing a precise placement without distortion during release. Following the intervention, the patient recovered rapidly with relief of cyanosis within one month.

Thought this case, we emphasize the importance of a careful diagnostic evaluation of a cyanotic infant with corrected complex CHD. We also demonstrated the feasibility of the percutaneous treatment and successful closure of the malformation in an infant with an Abernethy malformation type II with variants of anatomical connections.

The diagnosis of a rare pathology, as Abernethy malformation, in a patient with a corrected complex CHD can be delayed, as cyanosis is a common manifestation and is usually associated with residual lesions. However, the discussion and approach of these patients by a multidisciplinary team allows a timely diagnosis and treatment. Transcatheter closure of the shunting vessel at a pediatric age is a challenging procedure, requiring an experienced team and adequate material.

We report an atypical Abernethy malformation and hepatopulmonary syndrome type II in a cyanotic infant with corrected complex CHD. Despite the anatomic challenges due to an interrupted IVC, a left renal vein connected to the malformation and a severe hypoplastic intrahepatic portal venous segment, transcatheter occlusion of the malformation was feasible and led to a rapid recovery of the patient.

Reporting Checklist: The authors have completed the CARE reporting checklist. Available at http://dx.doi.org/10.21037/cdt-20-380

Conflicts of Interest: All authors have completed the ICMJE uniform disclosure form (available at http://dx.doi.org/10.21037/cdt-20-380). The series “Current Management Aspects in Adult Congenital Heart Disease (ACHD): Part III” was commissioned by the editorial office without any funding or sponsorship. The authors have no other conflicts of interest to declare.

Ethical Statement: The authors are accountable for all aspects of the work in ensuring that questions related to the accuracy or integrity of any part of the work are appropriately investigated and resolved. All procedures performed in studies involving human participants were in accordance with the ethical standards of the institutional and/or national research committee(s) and with the Helsinki Declaration (as revised in 2013). Written informed consent was obtained from the patient for publication of this manuscript and any accompanying images.