Pulmonary hypertension (PH) carries heterogeneous prognosis due to heterogeneous mechanisms. Congenital heart diseases can be associated with pulmonary arterial hypertension (PAH) through different conditions. Eisenmenger syndrome (ES) is one of the conditions in which a congenital heart disease that initially causes left-to-right shunt, induces an increase in pulmonary vascular resistance which eventually results in reversal of the direction of the shunt and development of cyanosis (1). There is an emerging percentage of adult patients with repaired congenital heart disease (2) developing PAH despite the closure of the shunt: the closed-shunt associated with PAH group. In the recently-published adult congenital heart disease Dutch registry, the overall prevalence of PAH in septal defects was 6% (3). In this group, PAH was related to ES in only 58% of the cases. Among the 42% remaining patients, some of them had PAH occurring despite closure of the heart defect.

Classically, patients with ES are considered to carry a better prognosis than patients with other causes of PH, closed-shunt associated with PAH, and patients with idiopathic PAH (IPAH) (4-10). All these studies focused on survival from diagnosis. Such comparisons are potentially biased because they are performed from the time of diagnosis rather than from the onset of the disease. The time interval between the beginning of the disease and the onset of symptoms cannot be precisely known, especially in cases with IPAH that may feature an extensive pre-clinical period of symptoms. Conversely, ES is associated with clinical signs and symptoms related to congenital heart disease. Therefore, the diagnosis of ES might be established closer from the beginning of the disease than for IPAH. Studying survival from diagnosis does not reflect the evolution of the disease entirely. We studied life span to add another dimension to the prognosis.

We aimed to determine if this better survival from diagnosis in ES patients was combined with a better overall life span compared to other causes of PH.

Adult patients admitted to and/or who attended the regional referral centre for PH and congenital heart disease in La Timone Hospital, Marseille, France, were included in our specific database from January 2001 to September 2010. According to national health policy, patients older than 15 years and 3 months in France are usually referred to adult departments. PH was defined as an invasively-measured mean pulmonary artery pressure ≥25 mmHg (11). Patients in groups 2 and 3 according to the updated classification of PH, Nice 2013 (12) were not included in our study.

Patients in group 2 were excluded (n=2) because of the difference in management (first intention therapy consists in treating the left-sided heart disease). Patients in group 3 (with lung disease and/or hypoxemia) were not included (n=22) because they were managed in the respiratory disease department in another centre.

Diagnosis of ES was based upon the presence of PAH at a systemic level and high pulmonary vascular resistance with reversed or bidirectional shunts through non-restrictive intracardiac or extracardiac communications (3,7,8,10). Patients with closed-shunt associated with PAH were defined as patients with PAH and previous surgical closure of a left-to-right shunt, without residual shunt at echocardiography and/or cardiac catheterization. Congenital heart disease classification was performed by three cardiologists specialising in congenital heart disease (Béatrice Bonello, Alain Fraisse, and Gilbert Habib) according to previous published classifications (12,13). The underlying defect was considered simple for atrial or ventricular septal defect, aorto-pulmonary window, persistent ductus arteriosus, and total or partial unobstructed anomalous pulmonary venous return. Complex defects included all other cases (combination of above-mentioned lesions, atrioventricular septal defect, and single ventricle…).

Data was retrospectively collected and derived from patients’ medical records. Demographic data collected was: date of birth, gender, date of diagnosis of PH confirmed by right heart catheterization, values of pulmonary artery pressure and vascular resistance, aetiology of the PH, type of congenital heart disease, and date of surgical closure of cardiac shunt if relevant. Follow-up was performed during scheduled outpatient clinics every 6 months, with clinical and echocardiography evaluation, or during hospitalizations. Outcome was defined as death, lung or heart and lung transplantation.

Statistical analysis was performed using SPSS 17.0. Categorical data was presented as counts (%) and continuous data as median (interquartile range). Mann-Whitney tests were used to compare age across groups. A Kruskal-Wallis test, followed by post-hoc Mann-Whitney tests was used to compare age across groups. Kaplan-Meier curves were used first to study event-free-survival from diagnosis to 15 years follow-up and secondly, to study survival according to the age in the three groups. Comparisons between groups were made using the log rank test. Patients who underwent lung or heart-lung transplantation were censored from further analysis at the time of transplantation because their subsequent survival would no longer reflect the survival pattern for PH, regardless of aetiology. P value <0.05 was considered as significant.

Out of 173 patients referred to our outpatients clinics for PH, 24 patients classified in group 2 (n=2) and in group 3 (n=22) were excluded. 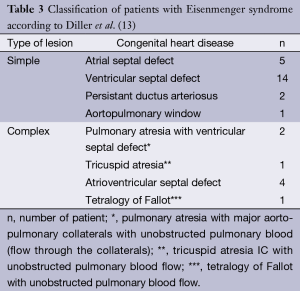 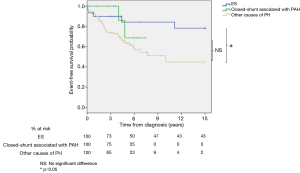 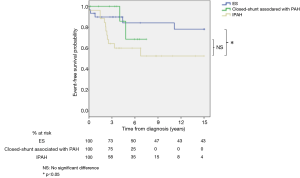 There was no difference for survival in patients with ES between simple versus complex lesion (logrank; P=0.8) and pre versus post-tricuspid shunt (logrank; P=0.3). 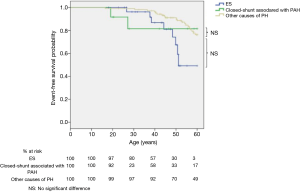 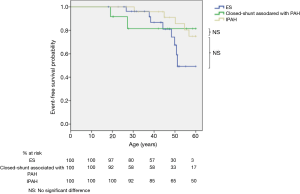 Patients with PH carry an important heterogeneity with variable prognosis (4,5,13-22). To match previous studies (5,10,23-25), we performed our comparison with the subgroup of patients with IPAH. We found a slightly higher survival rate in our population of ES patients and IPAH patients, as compared to previous reports (10,23,24,26,27). These better outcomes may reflect the recent improvement in the management of those diseases with advanced therapies (14,28,29).

Morbidity and mortality in ES

In line with previous reports, we found that patients with ES carry a better prognosis from diagnosis than patients with IPAH (4-13,23,24,26). In ES right ventricular function remains preserved due to the persistence of a “fetal” heart physiology (9).

How can we explain the lack of difference in life span between adult patients with ES and IPAH then? First, as we found, the diagnosis of ES is usually made at a younger age due to underlying symptoms of congenital heart disease; hence, they possibly live longer with the disease from the time of diagnosis. Conversely, IPAH may feature an extensive pre-clinical period of symptoms, whereas ES is associated with clinical signs and symptoms related to congenital heart disease. Secondly, in our ES populations, three of the four reported deaths resulted from well-defined complications of cyanosis (7,8,30). Cyanosis is responsible of abnormalities in platelets and coagulation pathways increasing the risk of both bleeding and thrombosis (31). Finally, there is a potential management bias when comparing patients with ES and other causes of PAH. Advanced therapies have been introduced in patients with IPAH following the recommendations from 2002 (25,32,33) with improvement in survival, whereas advanced therapies in ES have been recommended from 2006 (14,28,29). Comparison between survival in ES and IPAH should be performed after a longer period of uniform medical management.

Outcome of patients with closed-shunt associated with PAH

Modern management with early closure of the shunt, before the pulmonary vascular resistance increase, might decrease the incidence of PAH. However, some patients will develop PAH despite an early intervention. As previously reported patients with a closed-shunt associated with PAH carry a similar prognosis to patients with IPAH because they are prone to heart failure and sudden cardiac death (8,13). The median age of diagnosis is usually after the third decade (8,13). This should point the need for long term follow-up of patients after closure of a heart defect.

This is a retrospective study with a selection bias. First, we excluded patients lost to follow-up, and secondly we selected survivors referred to a tertiary PAH centre. Recent study suggests that survival of children with ES appears to be less than reported in adults (34,35). Therefore we can only make our observation on Eisenmenger patients who have reached adulthood. A population-based study including both paediatric and adult populations would be preferable.

Comparing each group of patients with PH according to the nice classification with one another would be interesting; our sample size did not allow such study. Multi-institutional studies should be performed.

Due to small number of patients in the closed-shunt associated with PAH group, our statistical analysis can have a lack of power. This could explain why, despite previous studies, we were unable to find any difference in survival with the ES group.

Although survival from the time of diagnosis differs between patients with ES, closed-shunt associated with PAH, other causes of PH as well as IPAH, their overall life span is similar. Long-term complications of cyanosis may counterbalance the more favourable hemodynamic profile of patients with ES.

Disclosure: We thank Actelion Pharmaceuticals France for having taken care of the author fees for the Annual European Society of Cardiology Congress 2010, where this study was selected for abstract presentation. We thank Matthew Edward Jeremy Hall for his kind help in editing the text.