Survival after orthotopic heart transplantation (OHT) is excellent, particularly if it is compared with the natural course of end-stage heart failure (ESHF). The most recent data of the registry of the International Society of Heart and Lung Transplantation (ISHLT) involving 114,783 heart transplantations from January 1992 to June 2017 indicates a current median year survival of 11.9 years (1). This has improved, albeit slight, as compared to the median survival of 10 years (n=78,050) with 122 patients at risk in 22 years, based on the 1982–2007 registry of the ISHLT. The development of new immunosuppressive drugs which allow a variety of immunosuppressive regimens, tailored to the individual patient, has contributed to this improvement, since rejection and the adverse sequelae of immunosuppression has been better controlled. After 20 years, approximately 21% of patients are still alive, according to the international registry (1). In some experienced centers, long-term survival is reported to be even higher (2,3). Whether heart transplant recipients transplanted at centers with superior short-term outcomes live longer on long-term follow-up remains unreported (4).

Only few papers with patients surviving more than 20 years after OHT have been reported (2,3,5-8). There are only small cohorts, and therefore the clinical characteristics associated with prolonged survival are not very well understood. There are sporadic single reports on patients living for 30 to 33 years after OHT, albeit published as newspaper articles. Detailed information on cardiac allograft vasculopathy (CAV) and the immunosuppression sequelae in these patients is largely unknown to the scientific community. No series to date has described any transplantation recipients with more than 30 years of follow-up.

This report provides a resumé of the burden and challenges the patients, who are still living >31 years after OHT, are affronted with.

Overview of the 10 heart-transplanted patients living for >31 years

From the first orthotopic heart transplantation in 1986 until August 2014 in Berlin, 1804 heart transplantations (plus the 70 patients transplanted in Hannover from 1983–1985) (9), which overall summed up to 1874) have been carried out including 52 re-transplantations but excluding the 101 combined heart and lung transplantations. Generally, all transplanted patients are strictly advised to have routine follow-up including laboratory tests, echocardiography, endomyocardial biopsy when necessary and coronary angiography. In the first year post-OHT, the patients are monitored monthly. In the second until the fifth year post-OHT, quarterly medical examinations per year are mandatory. After the fifth year post-OHT, follow-ups are conducted once annually. Thereafter, the regular post-transplantation follow-up is being done by the respective local attending physicians who then refer the patients back to us accordingly.

Of 147 transplants performed between February 1, 1985 and September 30, 1987, 10 patients survived longer than 31 years post-OHT and are the main focus of this report. Their medical records including operative procedures and follow-up reports were thoroughly reviewed.

The Institutional Review Board approved this study. The informed consent requirement was waived as the study itself was regarded as non-interventional and data protection standards were fulfilled. 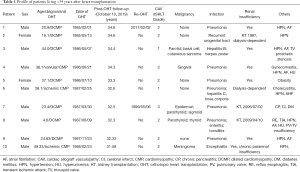 The course of each patient’s life post-OHT, with the burdens associated with living with a transplanted heart for a long-time is briefly described below.

The first patient (male, now 55.5 years old) developed recurrent pneumonia and chronic renal insufficiency. Through the years, he has been encumbered with hypertension and atrial fibrillation. These, however, did not prevent him from managing a landscaping business. He underwent re-transplantation for CAV 32 years after the primary OHT. No malignancy has developed. He has been happily married and is engaged in many social activities.

The second patient (female, now 50.6 years old) has recurrent urogenital tract infections, developed renal failure and had been dialysis-dependent until she underwent renal transplantation 2 years post-OHT. Except from having hypertension, she has no other co-morbidities. No malignancy has developed. She is employed and happily married.

The third patient (male, now 77.4 years old) underwent tricuspid valve replacement with Hancock 33 mm 10 years after the primary OHT. He developed several malignancies, i.e., parotid carcinoma (cylindroma, 6 years after OHT), skin tumors (basal cell carcinoma and cutaneous sarcoma, 31 years post-OHT), which were all treated surgically. He had shown signs of chronic allograft rejection 13 years post-OHT which was successfully managed medically. He underwent herniotomy (20 years post OHT) and cholecystectomy (23 years post-OHT). He had recurrent herpes zoster infections and had acquired Hepatitis B. He developed chronic renal insufficiency, hypertension, atrial fibrillation and hyperuricemia. During the latest follow-up it was shown that his tricuspid valve prothesis has become stenotic. He eventually underwent surgery for removal of a prosthetic thrombus. He has retired from work and enjoying his quiet retirement with his family.

The fourth patient (male, now 71.3 years old) developed gingival carcinoma 2 years post-OHT, for which he underwent surgery. He had recurrent pneumonia and developed renal disease. He has hypertension, atrial fibrillation and hyperuricemia. Over the post-OHT years, he developed gynecomastia. He has been retired from work and enjoying his life in the countryside.

This patient [female, now 70.3 years old, transplanted due to ESHF from dilated cardiomyopathy (DCMP)] showed signs of allograft rejection 2 years post-OHT which was successfully treated medically. She had recurrent bouts of pneumonia and developed renal insufficiency and obesity. No malignancy has developed. She has retired from work and continue spending quality times with her family.

The first patient (male, now 70.6 years old, transplanted due to ESHF from ischemic cardiomyopathy) had recurrent bouts of pneumonia, had acquired Hepatitis C and afflicted with recurrent tinea corporis. He had severe renal insufficiency and became dialysis dependent. He had cholecystitis and suffering from hypertension and atrial fibrillation. No malignancy has developed. He is enjoying his retirement years and engages himself in various social activities.

The third patient (male, now 36.9 years old) developed parathyroid and thyroid carcinoma 21 years after primary OHT und underwent surgery for these. He had recurrent bouts of pneumonia, tonsillitis and enteritis. A year later (22 years post-OHT), he underwent kidney transplantation, had signs of rejection managed medically. He suffers from reflux esophagitis, had transient ischemic attacks, hypertension, hyperuricemia and atrial fibrillation. During the last follow-up, he was found to have tricuspid and pulmonary valve insufficiency. He is currently employed, married and has two children.

The fourth patient (male, now 56.8 years old) had recurrent bouts of pneumonia and developed chronic renal insufficiency, hypertension and atrial fibrillation. No malignancy has developed. He is currently employed, married and has 2 children.

This patient (male, now 80.9 years old) had meningioma a year post-OHT which was resected. with subsequent encephalitis which was then resolved. He also showed signs of allograft rejection successfully abated with medical management. He then developed chronic pararenal insufficiency and hypertension. He has been in retirement for over 15 years, still physically active, and enjoying his life with his wife, children and grandchildren.

As shown in Table 1, all developed cardiac allograft vasculopathy of different severity based on ISHLT classification.

All patients had various degrees of renal dysfunction, which is a consequence of immune suppression. Two had underwent renal transplantation, and one is hemodialysis-dependent, as described in the case series.

Development of CAV is a major concern in the long-term follow-up of transplant patients. Immunosuppressive drugs have a major impact on the development and progression of cardiac allograft vasculopathy and the main cause of cardiac allograft loss after the first post-transplantation year. Localized or focal stenosis was diagnosed in all 10 patients within 5–15 years post-OHT. Interventional procedures were done on those with ISHLT grade 2. CAV was the main cause for re-transplantation in a patient after a post-OHT time of 12.25 years. It has been well documented that the early onset of CAV is a predictor of rapid development of severe forms of CAV, while the patients with late onset CAV have a delayed onset of CAV.

Post-transplant neoplasia remains a challenging long-term problem for patients post-OHT. PTLD appears to be largely the result of the effectiveness of current agents used for long-term immunosuppression, and the neoplasms typically harbor the Epstein Barr virus (EBV) genome, which is presumed to play a major role in neoplastic transformation.

Remarkable is the susceptibility of these patients to recurrent bacterial infections and infections of viral etiologies.

Heart transplantation enabled these patients with previous terminal heart failure to get back to a “normal” life. Based on their responses to the questionnaires, quality of life was reduced to a certain acceptable degree.

Noteworthy was that all these 10 patients reported having neither pathological anxiety nor depression symptoms.

The 10 patients expressed gratifying satisfaction with their social relations and support over the years post-OHT.

When these 10 patients were asked how they regard their overall health, 7 of them answered with “good to excellent” and “less good”/satisfactory by 3. Not one of them assessed their overall health as “bad.” Most of them experienced exhaustion tendency, gastric disturbances, pain in the extremities and joints, from time to time; however, they viewed them as part of the normal aging process and do not limit their daily routine activities.

When they were asked about their perception of the quality of their lives with regards to physical, social and environment, 6 of them responded with highly satisfactory, 2 of them with satisfactory and another 2 as decently fine.

Quality of life is not impaired despite somatic problems. In this period >31 years post-OHT, they even reported a surprising increase in their emotional well-being. The 10 patients are active and satisfied with their daily lives. They regard their own life as meaningful, have good families and active social relations.

Heart transplantation currently remains the treatment of choice for patient with severely advanced heart failure. No other treatment options, such as medical therapy or electrical and mechanical devices, can compete with the excellent results, particularly over the long-term.

In this series, heart transplantation has led to a considerable extension of life span of >31–34 years. Be it as it may, it is burdened by chronic allograft vasculopathy and immunosuppression sequelae, the main limiting factors for survival, which needed to be constantly addressed throughout their lifetime. Considering the tremendous advances in the immunosuppressive therapy and in the understanding of CAV pathophysiology, we can hope for even better results in the next years.

Provenance and Peer Review: This article was commissioned by the editorial office, Cardiovascular Diagnosis and Therapy for the series “Heart Failure in the Young and Old: Insights into Various Therapies”. The article has undergone external peer review.

Conflicts of Interest: The authors have completed the ICMJE uniform disclosure form (available at http://dx.doi.org/10.21037/cdt-20-286). The series “Heart Failure in the Young and Old: Insights into Various Therapies” was commissioned by the editorial office without any funding or sponsorship. RH served as the unpaid Guest Editor of the series, and serves as an unpaid editorial board member of Cardiovascular Diagnosis and Therapy from Jul 2019 to Jun 2021. The authors have no other conflicts of interest to declare.

Ethical Statement: The authors are accountable for all aspects of the work in ensuring that questions related to the accuracy or integrity of any part of the work are appropriately investigated and resolved. All procedures performed in studies involving human participants were in accordance with the ethical standards of the institutional and/or national research committee(s) and with the Helsinki Declaration (as revised in 2013). Individual consent was waived as the study itself was regarded as non-interventional and data protection standards were fulfilled.