Aortic stenosis (AS) is the most common valvular disease, with a growing prevalence in the aging population (1). In response to the narrowed valve, left ventricular (LV) hypertrophy is initially adaptive to restore wall stress and cardiac function. Ultimately, LV decompensation occurs as symptoms, followed by heart failure and death (2). The transition from adaptation to decompensation is mainly driven by LV remodeling (3,4). The extracellular matrix remodeling, mostly caused by diffuse interstitial fibrosis and/or focal replacement fibrosis, is the critical process of LV remodeling (5). Consequently, researchers are extensively interested in identifying and developing objective markers to detect structural and functional changes in the process of LV extracellular remodeling.

Cardiac magnetic resonance (CMR) imaging allows the comprehensive assessment of LV remodeling with its unlimited windows and excellent myocardial tissue characterization (6). CMR imaging can detect replacement myocardial fibrosis (MF) with late gadolinium enhancement (LGE) and detect diffuse interstitial fibrosis with the T1 mapping technique. T1 mapping-derived extracellular volume (ECV) has been reported as a promising marker for assessing diffuse MF in patients with AS (5,7). Both cellular hypertrophy and extracellular fibrosis can contribute to abnormal myocardial mechanics. Recently, myocardial deformation imaging assessed by echocardiography and/or CMR imaging has gradually become a valuable and noninvasive tool to reflect intrinsic myocardial contractility and functional consequences of related cardiac diseases (8). Although deformation imaging has been used to analyze MF and myocardial remodeling in various cardiac conditions (9-12), it was seldom reported in AS by the CMR-feature tracking (FT) technique. Furthermore, data regarding the utility of combined CMR T1 mapping and FT imaging for assessing the process of LV extracellular remodeling in AS are scarce.

The purpose of this study was to investigate the ability of CMR imaging parameters to identify and assess the changes in the process of LV extracellular remodeling in patients with severe AS using the T1 mapping and FT techniques. We present the following article in accordance with the STROBE (Strengthening the Reporting of Observational Studies in Epidemiology) reporting checklist, and MDAR reporting checklist (available at http://dx.doi.org/10.21037/cdt-20-803).

Patients with severe AS were prospectively and consecutively recruited from January 2018 to June 2019 in a single tertiary center. The inclusion criteria for the patient group were as follows (should meet two or more criteria): mean transvalvular pressure gradient (MPG) ≥50 mmHg, peak pressure difference gradient (PPG) ≥70 mmHg, and/or aortic valvular area (AVA) ≤1.0 cm2 as detected using echocardiography following guidelines (13). The exclusion criteria were as follows: moderate or severe concomitant valvular disease, history of myocardial infarction or acute coronary syndrome, contraindications to CMR imaging, and estimated glomerular filtration rate <30 mL/min/1.73 m2. Twenty healthy volunteers who were recruited from the community without cardiovascular disease were selected as controls. This study conformed to the ethical guidelines of the Declaration of Helsinki (as revised in 2013) and was approved by the Guangdong Provincial People’s Hospital, Guangdong Academy of Medical Sciences ethics committee (No. 20170216). Written informed consent was obtained from all participants.

Transthoracic echocardiography was performed using a GE Vivid 9 (GE Vingmed Ultrasound, Horten, Norway) with an M5S probe (2–4 MHz) following the guidelines of the European Society of Echocardiography (14). Flow velocity across the aortic valve was measured at multiple transducer positions using continuous-wave Doppler. MPG and PPG were calculated with a simplified Bernoulli equation. AVA and AVA index was calculated using the continuity equation.

LGE imaging was performed using a phase-sensitive inversion-recovery (PSIR) sequence approximately 10–11 min after contrast ejection, covering a stack of short-axis images from the apex to the base along with long-axis planes (two-, three-, and four-chamber views). The PSIR imaging parameters were as follows: field of view, 230×230 mm2; voxels, 2×2×8 mm3; TR, shortest; TE, shortest; and TI, measured at that time.

LV volume, function, and LGE were analyzed offline using the QMASS software (Version 2.0, Medis, Leiden, the Netherlands). LGE extent was quantified using a signal intensity threshold level of five standard deviations (SDs), and expressed in grams and derived as a percentage of LV. For T1 mapping, myocardial T1 times were measured carefully in a global region of interest (ROI) at the whole mid-ventricular wall by sketching the endocardial and epicardial borders. Meanwhile, an ROI was drawn in the LV cavity to measure the blood pool T1 time (Figure S1). Areas with LGE were not excluded from T1 analysis. T1 mapping was calculated using the MapMarker software (Version 2.0, Medis, Leiden, the Netherlands). The λ and ECV were calculated as follows:

Patients were divided into subgroups according to preserved LVEF (LVEF ≥50%) or reduced LVEF (LVEF% <50%). The intraobserver and interobserver reproducibility were tested in randomly selected 21 patients and 9 controls for measuring T1-derived and FT-derived parameters by 2 blinded investigators (with 5 and 12 years of CMR imaging experience).

Table 1 Baseline characteristics of patients with severe AS
Full table 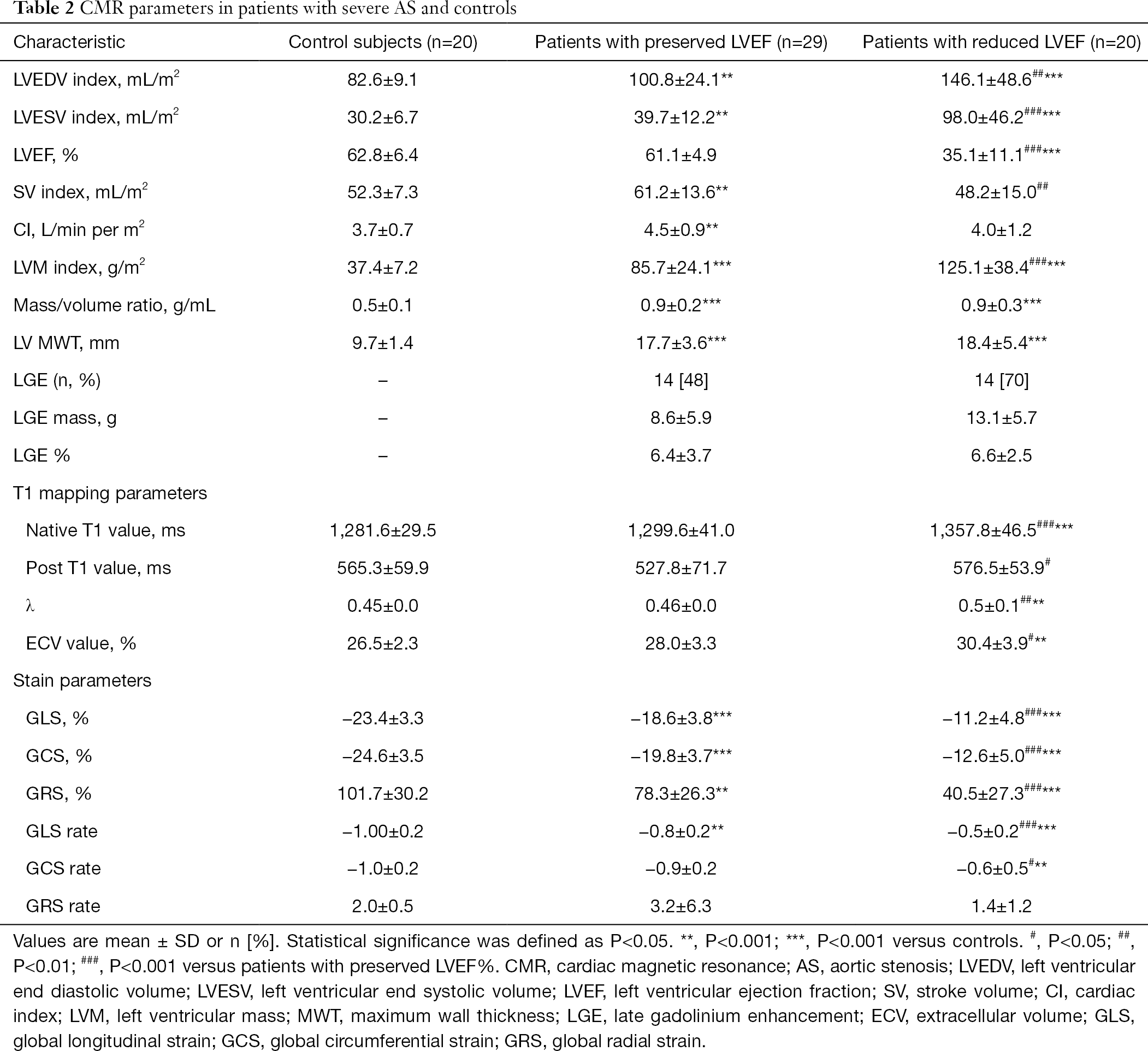 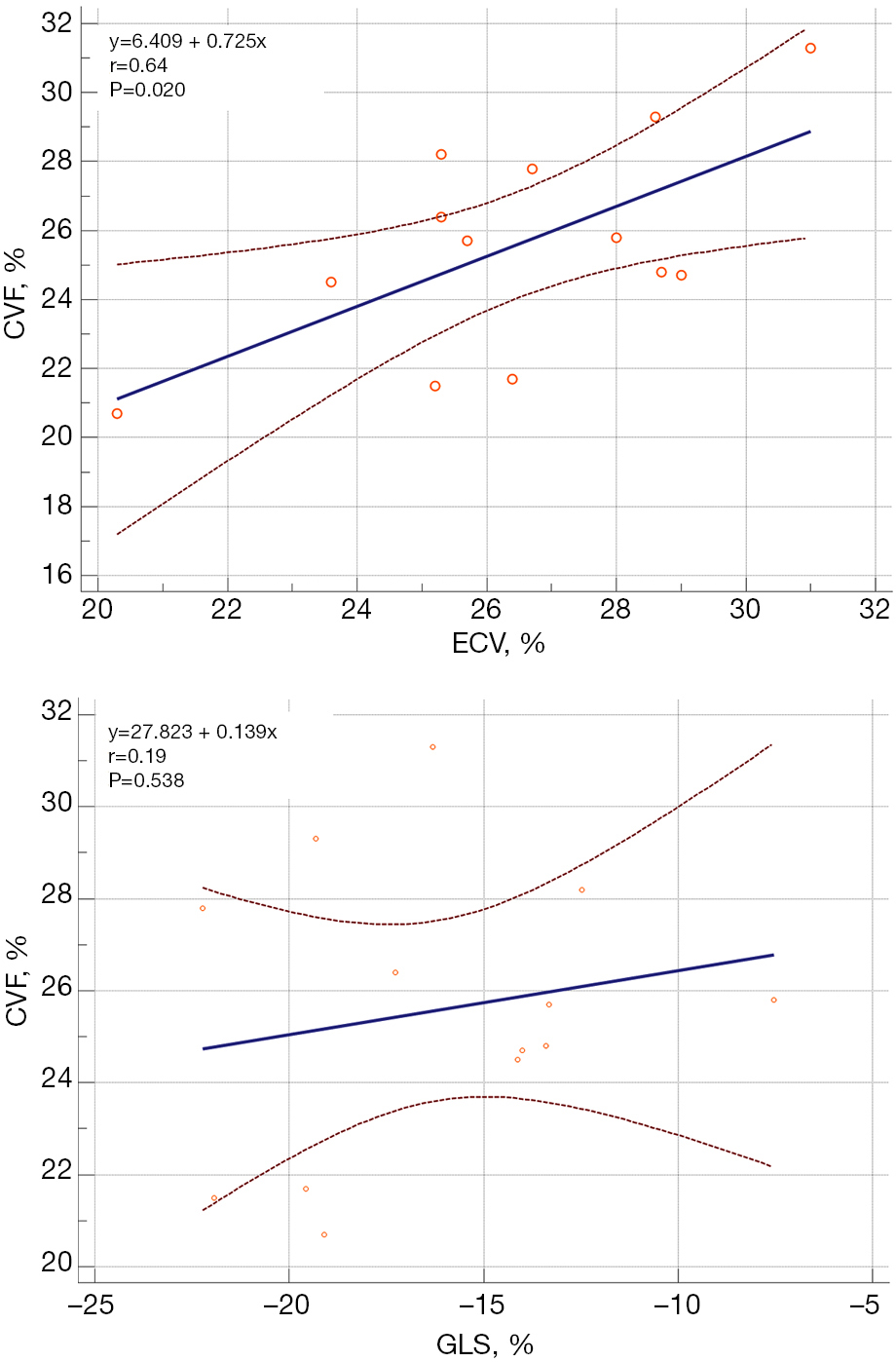 Figure 1 Correlation of CVF with ECV and GLS in patients with severe AS. The analysis showed a moderate correlation between ECV and CVF (r=0.64, P=0.020). However, no significant correlation was found between GLS and CVF (P=0.538). The dotted line represents the 95% confidence interval. CVF, collagen volume fraction; ECV, extracellular volume fraction; GLS, global longitudinal strain; AS, aortic stenosis. 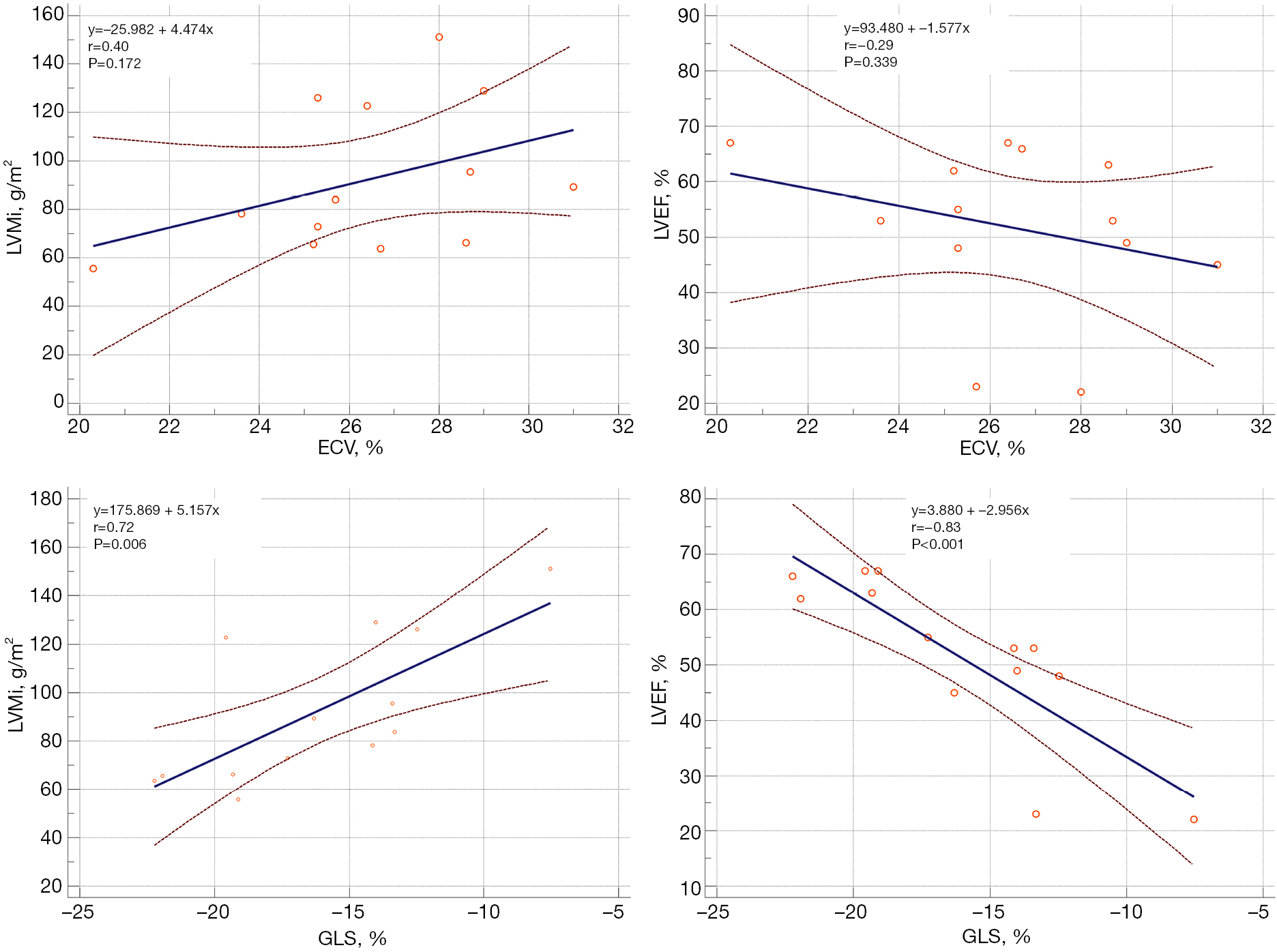 Discrimination of patients with preserved LVEF from controls

The principal findings of the present study were as follows: (I) GLS was the functional marker of extracellular remodeling, which showed significant correlations between GLS and LVEF (r=−0.83, P<0.001). (II) GLS is the functional marker of myocardial mechanics related to disease state before the fibrosis burden intensifies. It showed increasing impairment from the control group to the preserved LVEF AS group to the reduced LVEF AS group (–23.4%±3.3% vs. –18.6%±3.8% vs. –11.2±4.8%, P<0.05), and showed the best diagnostic performance (AUC 0.83) as a significant discriminator between patients with preserved LVEF and controls. (III) ECV was the structural marker of extracellular diffuse fibrosis burden, which showed a significant correlation between ECV and CVF (r=0.64, P=0.020).

Myocardial deformation imaging has been reported as a sensitive modality to evaluate the functional consequences of MF (8,15). The LV function is determined by the sum of contraction and relaxation in the endo-, mid-, and epicardial layers. Therefore, the myocardial dysfunction in the involved myocardial layer can be classified into subendocardial, transmural, and subepicardial myocardial dysfunction (16). During the course of AS, the early stage of MF starts in the subendocardial layers leading to a reduction in longitudinal LV mechanics (17). However, LVEF, which is predominantly determined by mid-MF, can be normal even in the presence of extensive subendocardial fibrosis (3,18). Consistent with previous studies using the echocardiographic technique (19-21), the present study demonstrated a reduction in GLS in patients with AS compared with controls despite a preserved LVEF using the CMR-FT technique. These findings suggested that GLS might better characterize subtle mechanical changes in LV during the remodeling process in patients with AS and that GLS had an earlier diagnostic power than LVEF in this clinical setting. Furthermore, the present study showed that GLS, GCS, and GRS were increasingly impaired from the control group to the preserved LVEF AS group to the reduced LVEF AS groups, which indicated that subtle changes in longitudinal and radial deformation were gradually related to the disease state. Thus, an objective change in myocardial strain is more sensitive than observable symptoms and general functional parameters (e.g., LVEF and SV) in detecting a functional abnormality in AS.

GLS has been validated as a sensitive parameter in quantifying longitudinal LV function, which is more reproducible and less variable than other deformation indices in line with the results of reproducibility in the present study. CMR imaging strain parameters derived from FT could reflect early functional change using routine cine images in less than 10 min (22). As a simple and practical method, GLS acquired from FT is a promising technique in assessing functional consequences in the subclinical stage of severe AS, especially in patients with suboptimal echocardiographic image quality.

T1 mapping–derived ECV has emerged as a novel and promising marker to evaluate diffuse MF due to better histopathological correlation in the studies by Park (23) (r=0.645, P<0.001) and Chin (24) (r=0.70, P=0.016), in line with the findings of the present study (r=0.64, P=0.020). With regards to LV structure and function, no significant correlation of ECV with LVMi and LVEF was found, consistent with the study by Treibel (18), which showed that ECV correlated weakly with LVEF (r2=–0.096, P=0.001) and did not correlate with LVMi (P=0.06). However, a strong correlation of GLS with LV structure (LVMi) and function (LVEF) was found in the present study. Therefore, the ECV obtained using T1 mapping could be an ideal surrogate marker for detecting extracellular diffuse fibrosis burden but not be a sensitive marker for assessing the functional changes in LV extracellular remodeling.

A comparison of the control group with the preserved LVEF AS and reduced LVEF AS groups in the present study showed that GLS was an early marker of myocardial mechanics related to the disease state before the fibrosis burden intensified. When no difference was observed in extracellular fibrosis burden (ECV) between patients with preserved LVEF and controls, global LV strain parameters (e.g., GLS and GCS) had been impaired. This finding suggested that functional changes might be manifested before structural changes. Further studies on myocardial biopsy specimens from more early-stage and asymptomatic patients are needed to verify the findings.

This study had several limitations. First, this was a single-center cohort study with a small sample size. Hence, further larger-scale investigations are needed. Second, although the histopathological analysis (the gold standard for assessing fibrosis) was performed in some patients, the sample size was still small. Third, the present study using combined T1 mapping and FT techniques lacked follow-up and prognostic information. Studies with long-term follow-up are required to validate and expand the findings of this study in the future.

Conflicts of Interest: All authors have completed the ICMJE uniform disclosure form (available at http://dx.doi.org/10.21037/cdt-20-803). The authors have no conflicts of interest to declare.

Ethical Statement: The authors are accountable for all aspects of the study in ensuring that questions related to the accuracy or integrity of any part of the study are appropriately investigated and resolved. The research was conducted in accordance with the Declaration of Helsinki (as revised in 2013), and was approved by the Guangdong Provincial People’s Hospital, Guangdong Academy of Medical Sciences ethics committee (No.: 20170216). Written informed consent was obtained for all participants before CMR imaging.