The fundamental approach used for successful mitral valve repair is based on Carpentier’s techniques and includes (I) resection and suturing, (II) chordae reconstruction, (III) edge-to-edge repair, (IV) patch augmentation repair, and (V) ring annuloplasty (1). Combinations of these techniques have previously been used for mitral regurgitation (MR) treatment. The triangular or quadrangular resection suture procedures, which focuses on the posterior leaflet lesion of the mitral valve, are the commonly utilized approaches. However, echocardiographic analyses conducted after these resection suture procedures have indicated that these techniques may restrict the motion of the posterior leaflet (2,3). Perier et al. introduced a new paradigm for the reconstruction of a posterior leaflet prolapse, which they termed “respect rather than resect (RRR)”. The goal of the RRR approach is to correct the prolapse, without leaflet resection, and to transform the posterior leaflet into a smooth and vertical buttress to ensure the best coaptation surface (4).

The resection suture technique remains the main technique for the surgical reconstruction of the heart valve. However, incorporation of a non-resection-based folding technique, which can utilize artificial chordae, allows for simplified procedure reversal and repositioning. Currently, our institution has begun to actively incorporate techniques, such as the folding or non-resection technique using artificial chorda, because of their reversibility and retry on repair, aiming to shift to minimally invasive cardiac surgery (MICS).

We present the following article in accordance with the STROBE reporting checklist (available at http://dx.doi.org/10.21037/cdt-20-760).

This study conformed to the provisions of the Declaration of Helsinki (as revised in 2013). This study was approved by the institutional review board at the Saitama Cardiovascular and Respiratory Center (No.2020004) as a Case Control Study. Written informed consent was obtained from the patient for using the data for academic publication purposes. The study was registered with the University Hospital Medical Information Network (study ID: UMIN000039041).

Between January 2016 and September 2019, a total of 88 consecutive patients with moderate-to-severe MR underwent mitral valve repair at the Saitama Cardiovascular and Respiratory Center. Only patients who underwent mitral valve repair for the posterior mitral leaflet (PML) lesion were included in this study. Patients who (I) underwent a concomitant aortic valve procedure, (II) had anterior leaflet or bi-leaflet pathology, or (III) required reoperation were excluded. To mitigate any confounding factors, patients with neochordal replacement were further excluded. A total of 36 patients, who were treated with either triangular suture resection (TR; n=18) or FR (n=18), were assessed in this study.

FR is based on a nonresectional technique with vertical inversion of the prolapsed segment into the left ventricle. The prolapsed lesion was detected by a saline water pressure test and indicated by a markedly redundant tissue. A pilot suture was placed at the free edge of the excessive lesion. A temporary suture was placed, followed by an additional saline water test. If the saline pressure test showed regression of MR, additional interrupted sutures were placed toward the annulus. The leaflet height was adjusted to prevent the formation of an indentation, which can lead to a new MR lesion. A ring selection was based on the measurement of the surface area of the anterior leaflet and placed after confirming the absence of MR to prevent future annulare dilation. TR was performed by resecting excessive leaflet tissue, then reattaching leaflet remnants, in the absence of an annular plication (8). To obtain a good operative field, the ring annuloplasty sutures were placed first, regardless of the procedure (FR or TR). The choice of FR or TR was based on the surgeon’s preference. These procedures were performed as basic techniques by three surgeons. 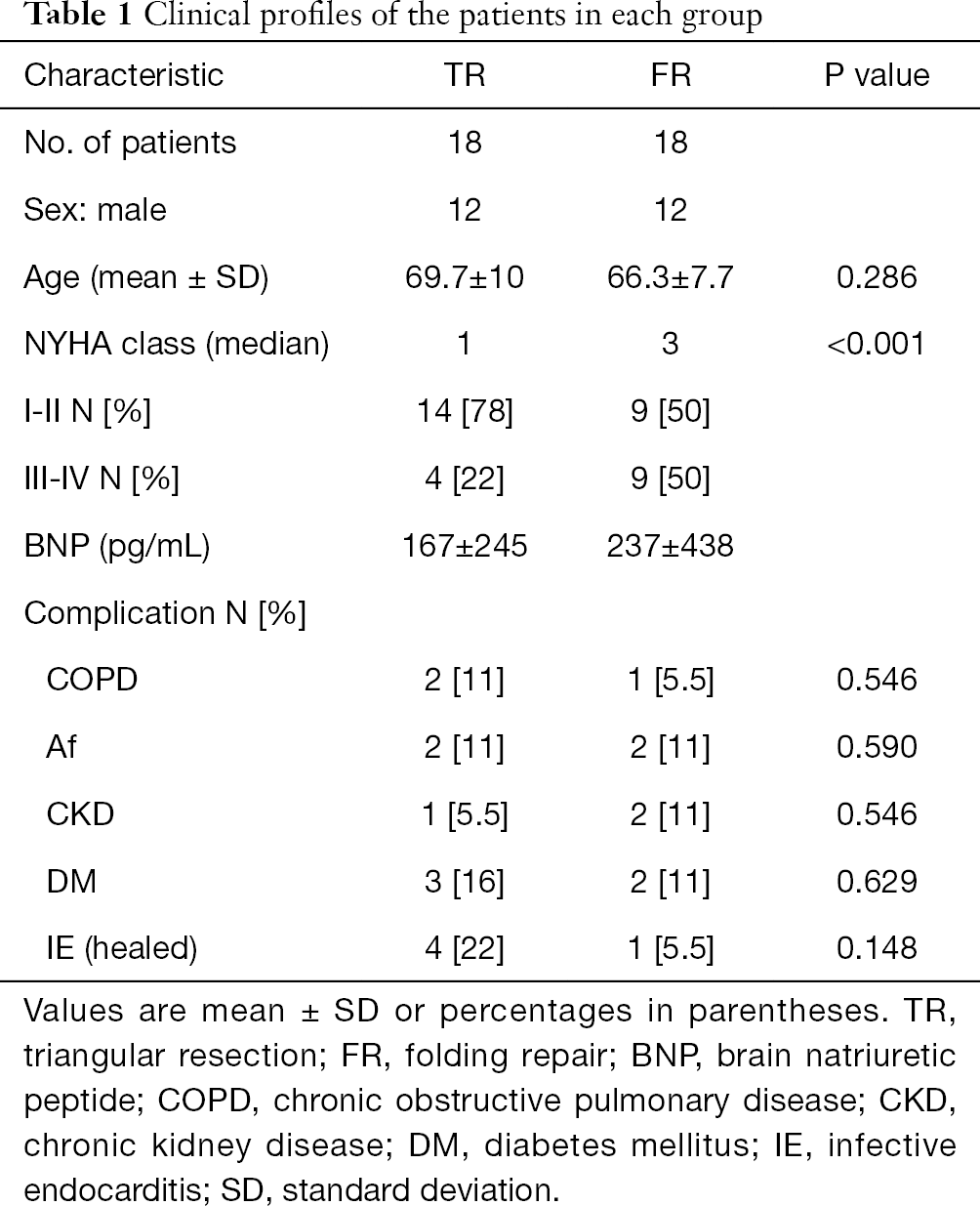 Preoperative echocardiographic data of the two groups (TR vs. FR) are shown in Table 2. According to the preoperative echocardiographic results, cardiac function and morphology showed no statistically significant differences between the two groups. However, the location of prolapse was 77.7% P2 in TR and 55.5% P3 in FR (TR-P2 n=14; FR-P1, 3 n=17). 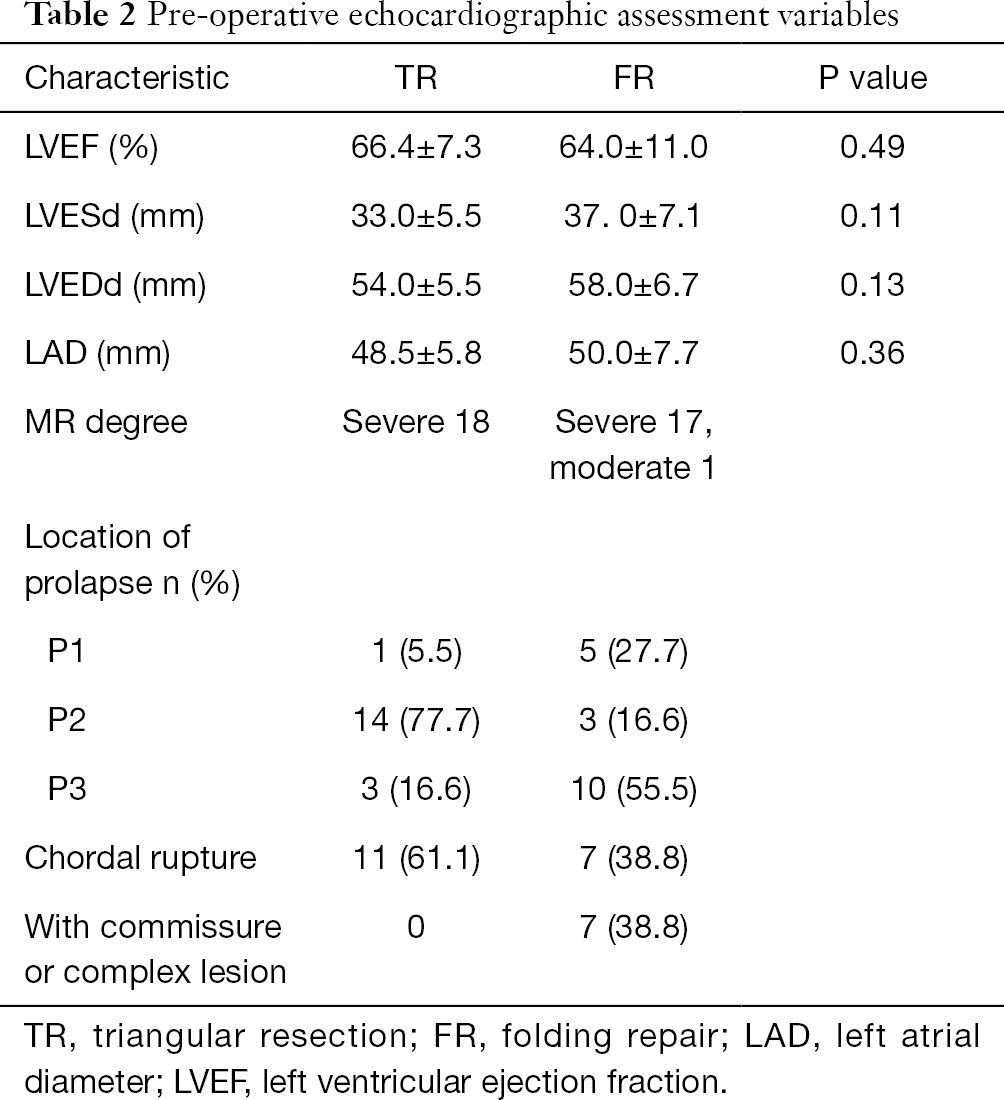 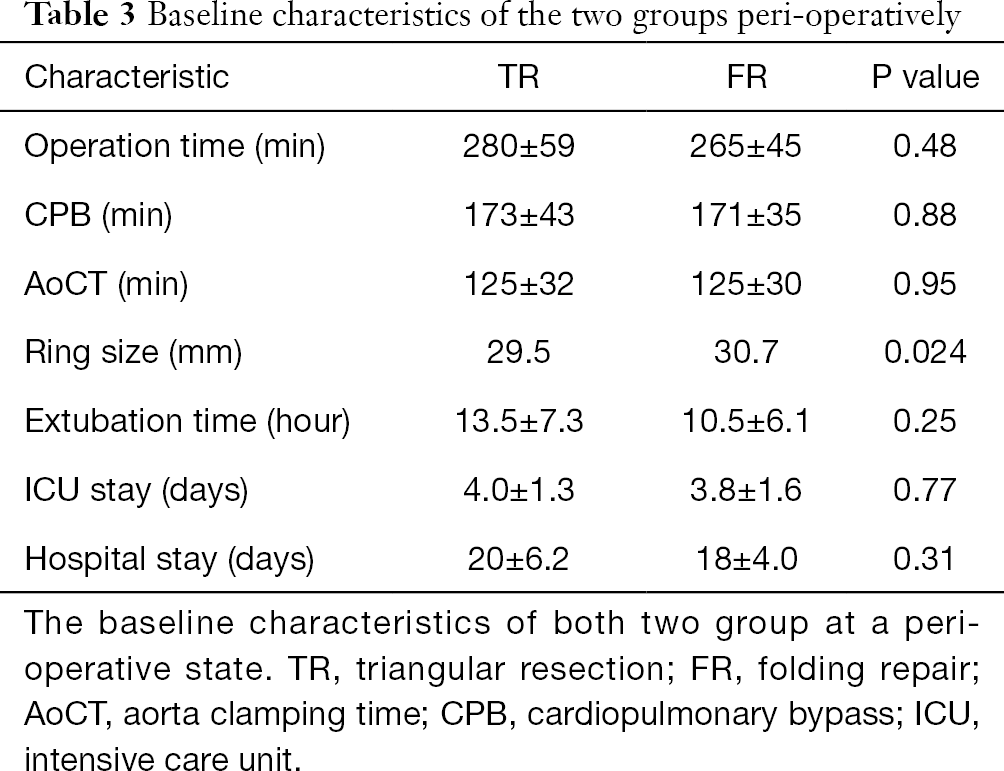 The levels of brain natriuretic peptide (BNP) decreased significantly from 167±245 pg/mL pre-operatively to 69±9.8 pg/mL post-operatively (P=0.012) in the TR group. However, there was no significant change in the respective BNP levels in the FR group (237±438 to 57±39; P=0.081). There was no statistically significant difference between the TR and FR groups in the BNP values after the operation (P=0.47) (Figure 1). 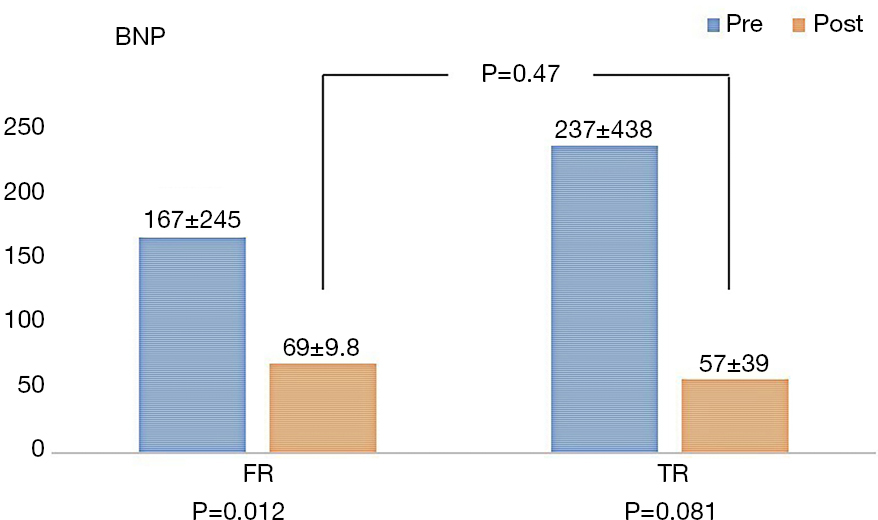 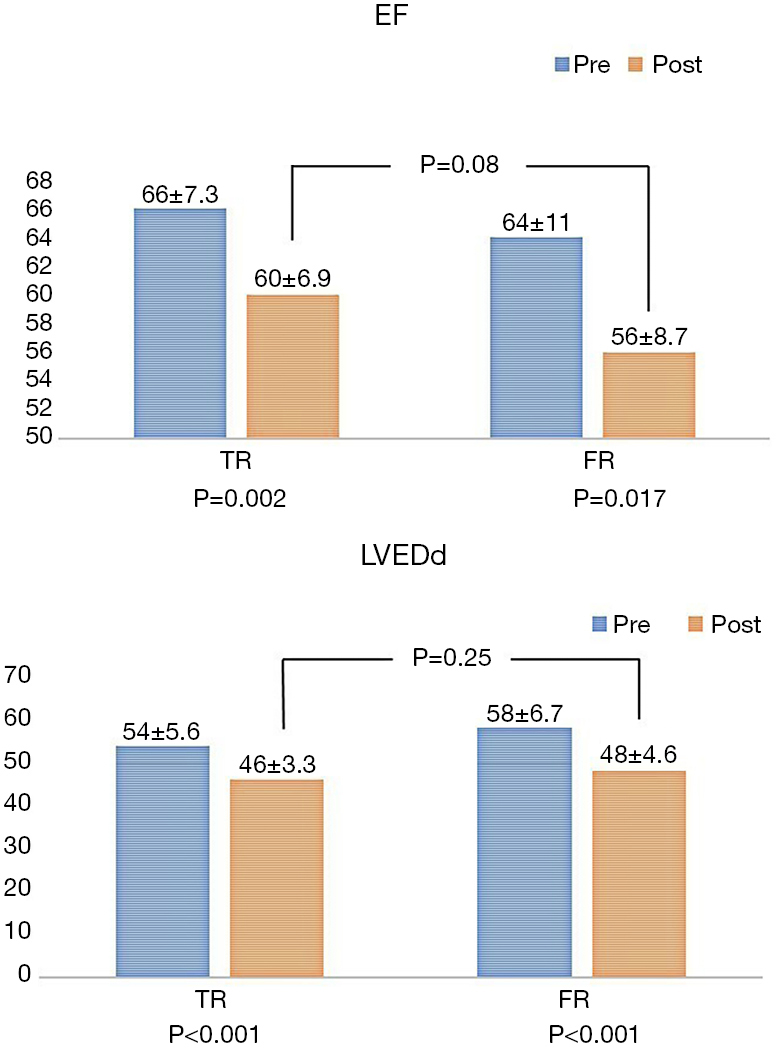 Figure 2 Comparison of the EF and LVEDd obtained pre-operatively with those obtained post-operatively. There were no statistically significant differences in ejection fraction (EF) (P=0.08) and diastolic dimension (Dd) (P=0.25). The EF decreased in both groups. 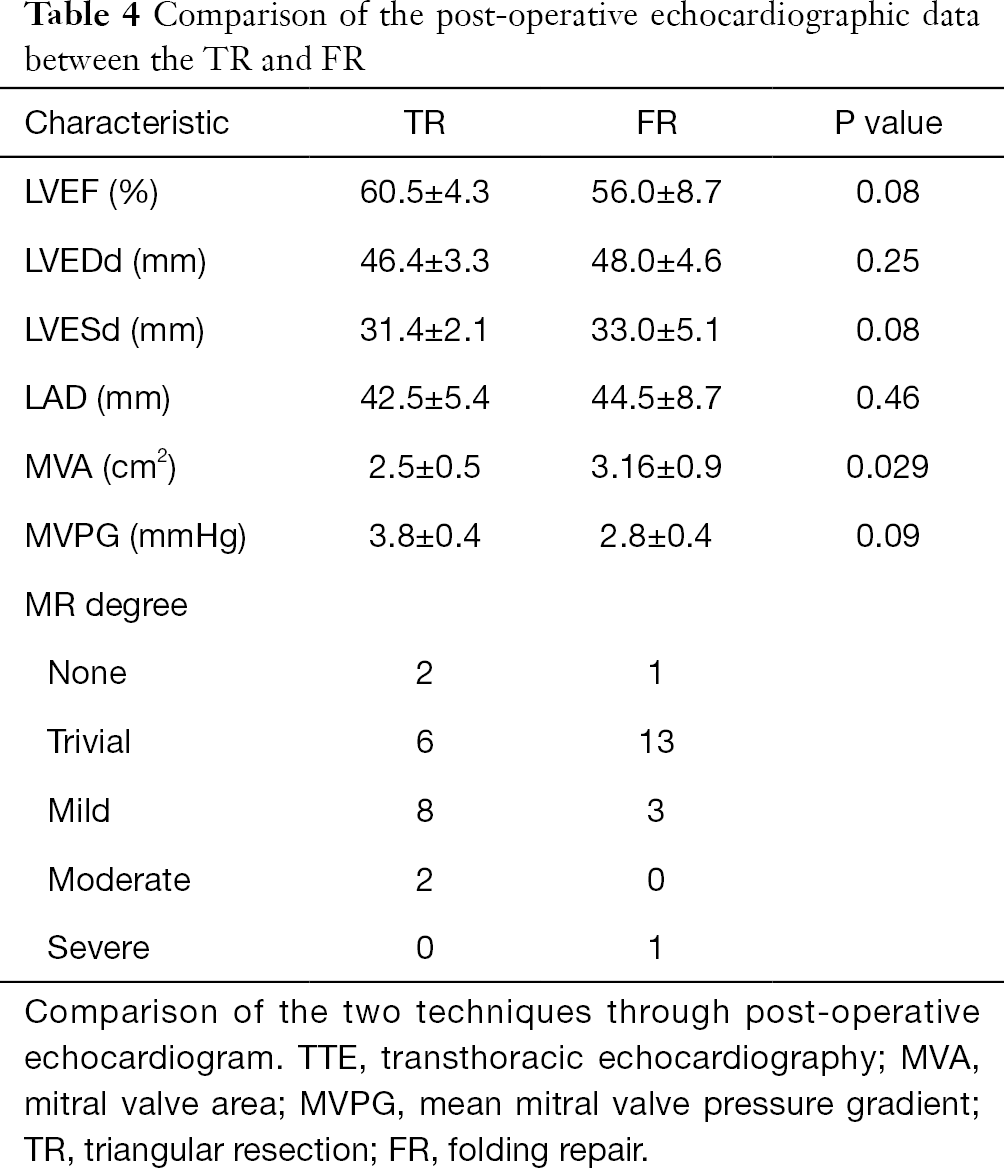 The MR regression rate was 94% under mild MR in the FR group (1 case; severe MR), while it was 88.8% in the TR group (2 cases; moderate MR) during the same duration (Figures 3,4). The reasons for recurrence were a degenerative stenotic change [mitral stenosis (MS) n=2] in the TR group and a chordae rupture in the FR group (n=1). There were no re-operation cases during the observation period in either group.

PML prolapse is the most common lesion in mitral valve insufficiency. The TR technique, a standard technique for mitral lesion repair, has exhibited excellent long-term durability (9). However, Perier et al. suggested that repair procedures should preserve the posterior leaflet tissue to maintain anatomical and physiological distributions of forces and stress on valve components in the left ventricle (4). In this study, we investigated the difference between the TR and FR techniques in patients with PML lesion and determined whether similar results could be attained with the artificial chordae technique. The use of artificial chordae is a promising technique and has become popular in the repair of the posterior leaflet. However, Seeburger et al. reported that the chordae replacement technique leads to significantly longer operative times, duration of CPB, and aortic cross-clamp times than the leaflet resection technique (5). Yet, our study suggested that there was little difference in the operative time, CPB time, and length of ICU stay between the two techniques. The FR technique makes it easy to remove and reposition when the results are unsatisfactory, allowing for a shorter operative time compared with chordae replacements. This would be advantageous for MICS operation and surgical training purposes.

The degree of residual MR regression to a less than mild level was similar in both groups (Figures 3,4). The risk factors for the late recurrence of moderate or severe MR include fibroelastic etiology, mitral calcification, posterior leaflet plication, non-use of prosthetic ring annuloplasty, and significant pulmonary hypertension (10). Two recurrent cases from the TR group showed degenerative MS changes and had healed IE. Therefore, MR regression within our patients was not associated with previously identified risk factors. Nishida et al. reported that the cause of MV repair failure was valve-related in 71% of patients, 9% of which were IE patients. Furthermore, MV re-repair was more common in leaflet suture dehiscence, ring detachment, and neochordae complication procedures (11).

The MVA was significantly larger in the FR group. The FR group had a lower pressure gradient (PG) than the TR group (2.8±0.4 vs. 3.8±0.4 mmHg, P=0.09), but this difference was not significant. However, a larger MVA may provide a lesser PG (12). Similarly, Seeburger et al. reported that after a leaflet-preservation approach with the use of artificial chordae, the mitral orifice area was larger and the mean transvalvular pressure gradients were lower (5). Jahren et al. reported that neochordoplasty, with a ring annuloplasty, resulted in significantly lower transvalvular pressure gradients than leaflet resection in an ex vivo porcine model (13). FR preserved the valve leaflet and sub-valvular components as artificial chordae, which led to similar results. Regarding the size of the implanted mitral annuloplasty rings, the FR group allowed for implantation of significantly larger rings. In this small series, there was no clinical difference between the groups but why this varied between the groups. One of the possible reasons for the small ring size in the TR group, despite the fact that the ring size was formally selected based on the size of the anterior leaflet surface area, was that the surgeon may have had a bias to select a smaller ring size in order to gain more coaptation area because of the resection of the posterior leaflet area.

The FR technique is relatively simple and stress-free compared with “resection and suture” or “chordae-transplantation”. In cases with deficient valve repair, it is possible to re-initiate FR procedures. The FR technique repairs prolapsed leaflets through insertion into the left ventricle, allowing easy fine-tuning with a pilot suture and repositioning, if unsatisfactory results are obtained. If the FR technique produces successful results, similar or better than those of well-established techniques, it may be useful, allowing minimally invasive operations, and may also provide an opportunity for less-experienced surgeons to conduct valve repair surgeries (6).

In the TR group, LV function was enhanced after the operation, especially the EF, although this was not significantly different from the FR group (60.5%±4.3% vs. 56%±8.7%, P=0.08). In general, PML resection leads to loss of native valve surface area, altered native valve anatomy, and impairment of physiological function. Thus, the PML is usually stiff, with limited mobility, and with limited coaptation surface area along the anterior leaflet (2). As conceptualized by Carpentier, the goal of mitral valve repair is to restore a good coaptation surface to ensure satisfactory function of the mitral valve (1). The main goal of the RRR approach is to correct the prolapse without leaflet resection (4). Nonresectional dynamic repair techniques are designed to restore normal mitral valve, left ventricular outflow tract, and aortic-mitral coupling function (14).

Through echocardiographic calculations, Imasaka et al. indicated that patients undergoing chordae replacement have superior postoperative LV performance than those undergoing leaflet resection (15). Other groups have suggested that non-resection-based strategies preserve leaflet tissue and restore good leaflet coaptation and mobility (3,7). However, our results showed no significant difference between the TR and FR groups. A meta-analysis of 16 papers by Tourmousoglou et al. showed no difference in outcomes between preservation and resection, but it showed that the differences tended to be determined by the experience and knowledge of the surgeon (16).

Although the tendency to avoid resection to treat posterior leaflet prolapse has become more popular, the results of our autopsy cases support Dreyfus’ alternative approach based on the “respect when you can, resect when you should” concept (17).

This study utilized a retrospective, single-institution analysis, which may limit its generalizability. The sample size was relatively small; therefore, the results might be biased. The operative selection of either FR or TR was based on the surgeon’s preference. Furthermore, the follow-up period was limited, as only the early outcomes and short-term MR recurrence rates were evaluated. A larger patient group and longer follow-up period may be necessary to assess the efficacy and durability of these techniques.

The TR and FR techniques showed comparable surgical outcomes and durability. However, FR has a benefit in terms of the MVA and pressure gradients, which is expected for an artificial chordae technique and which is relatively simple and may be beneficial for repairing any mitral valve regression and for surgical training purposes.

Reporting Checklist: The authors have completed the STROBE reporting checklist. Available at http://dx.doi.org/10.21037/cdt-20-760

Conflicts of Interest: All authors have completed the ICMJE uniform disclosure form (available at http://dx.doi.org/10.21037/cdt-20-760). The authors have no conflicts of interest to declare.

Ethical Statement: The authors are accountable for all aspects of the work in ensuring that questions related to the accuracy or integrity of any part of the work are appropriately investigated and resolved. This study conformed to the provisions of the Declaration of Helsinki (as revised in 2013). This study was approved by the institutional review board at the Saitama Cardiovascular and Respiratory Center (No. 2020004). Written informed consent was obtained from the patient for using the data for academic publication purposes. The study was registered with the University Hospital Medical Information Network (study ID: UMIN000039041).