The majority of acute ischaemic vascular events occur when an atherosclerotic plaque ruptures or erodes exposing the underlying necrotic core to the circulating blood. This triggers platelet aggregation and the coagulation cascade causing intra-arterial thrombosis, compromised blood flow and tissue infarction. Identification of plaques at risk of rupture, the so-called vulnerable plaque, is challenging, as the majority are non-flow limiting at the time of antecedent angiography or stress imaging.

Histological studies have demonstrated that vulnerable plaques have certain pathological characteristics that offer potential targets for identification. Structural features, such as positive remodelling, neovascularisation and intraplaque haemorrhage, can already be detected with non-invasive imaging (1). Active, pathophysiological processes such as inflammation and microcalcification however, represent additional drivers of vulnerability that have proven more challenging to identify non-invasively (2,3) (Figure 1). Inflammation is predominantly defined by macrophage infiltration and is a key factor driving the progression of atherosclerosis, the formation of the necrotic core and ultimately fibrous cap rupture. The latter is closely related to the release of matrix metalloproteinases by macrophages that weaken the cap and predispose it to rupture. In order to protect against these destabilising effects, the body is thought to wall off and heal the intense inflammation within the necrotic core via the process of calcification. Macroscopic deposits of calcium are associated with burnt-out and clinically stable disease. By contrast, the very early stages of microcalcification are associated with ruptured and high-risk lesions, in part because they identify inflamed plaques that have not yet healed, and in part because microcalcification may directly weaken the cap surface (4,5). Both inflammation and microcalcification therefore represent important potential imaging targets for the identification of vulnerable atherosclerotic plaques and with it the promise of identifying patients at increased risk of myocardial infarction. Unfortunately techniques capable of prospectively detecting such high-risk plaques in the coronary arteries have proved elusive. It is in this context that we investigated the use of positron emission tomography (PET) of the coronary arteries and, in so doing, raised some hope that this goal might be achieved (6,7).

In this prospective clinical trial, we compared two PET tracers as potential markers of plaque vulnerability: 18F-fluoride and 18F-fluorodeoxyglucose (18F-FDG). Both tracers have been used clinically in oncology imaging for many years, are straightforward to produce and widely available. 18F-FDG is a glucose analogue that is taken up by metabolically active tissues and becomes trapped within the cell. In the vascular setting, it is believed to act as a marker of inflammation, on the basis that macrophages have increased metabolic requirements compared to surrounding tissue. Within the carotid arteries 18F-FDG uptake correlates well with macrophage burden, symptomatic status and cardiovascular risk factors (8). However, its use in the coronary arteries is more problematic, largely as a result of intense uptake by the adjacent myocardium. This frequently obscures the coronary signal, limiting plaque analysis (9).

18F-fluoride binds to hydroxyapatite, the dominant in vivo form of calcium, and is not usually detected in the myocardium (10). The signal-to-background activity in the coronary arteries is therefore excellent. The magnitude of 18F-fluoride uptake depends on the surface area of exposed hydroxyapatite to which it can bind. This is substantially greater in regions of nano-crystalline microcalcification compared to the macroscopic deposits detectable on computed tomography (CT) that represent advanced, typically stable, fibro-calcific nodules where much of the crystal is internalized. On this basis, 18F-fluoride, provides different information to CT, holding potential as a marker of active microcalcification and therefore of high-risk vulnerable plaque (Figures 1,2). 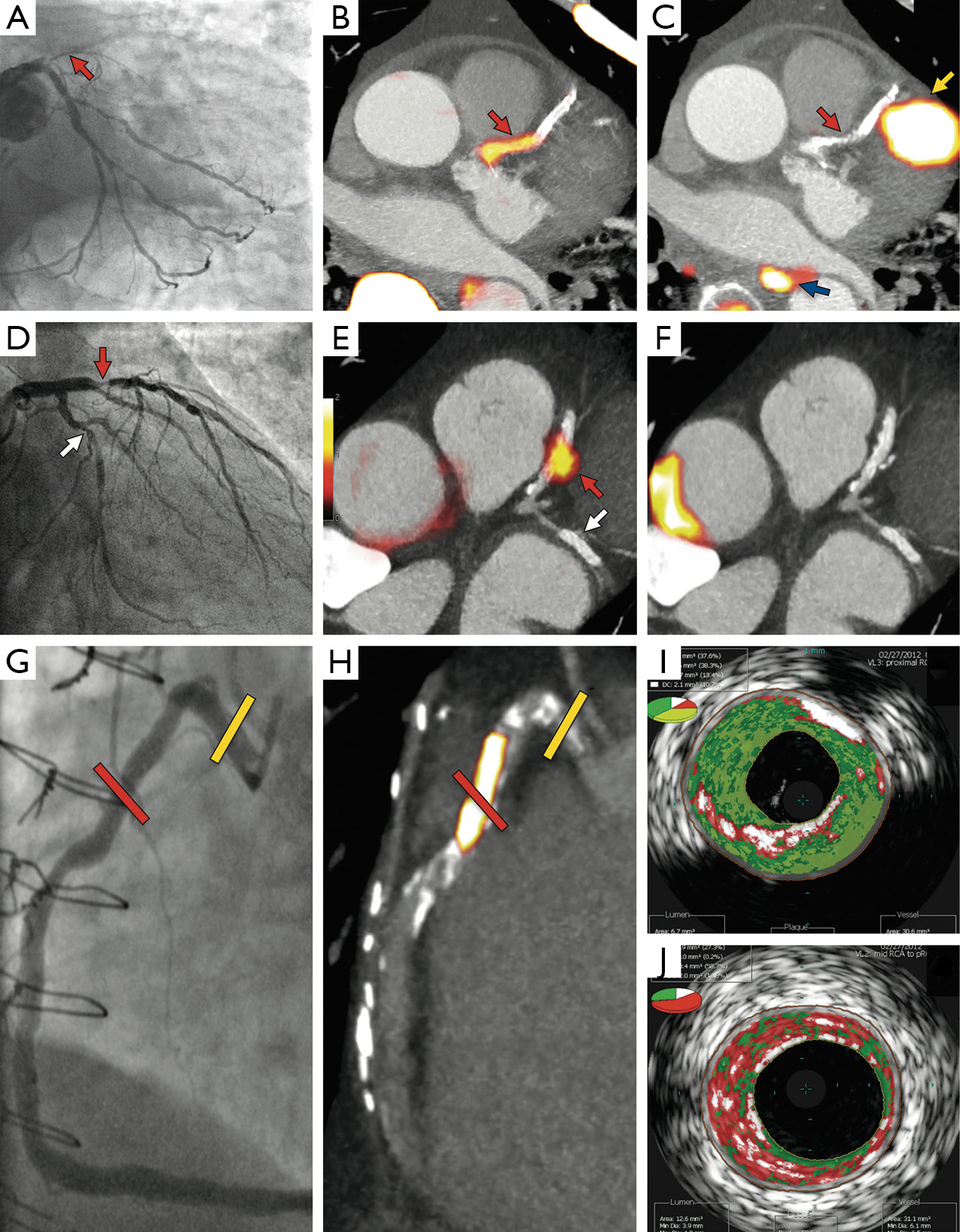 Three distinct patient cohorts underwent combined PET and CT (PET-CT) coronary angiography imaging using these tracers. The first was a group of 40 patients with acute myocardial infarction (26 with ST elevation, 14 without ST elevation). The primary endpoint was a comparison of 18F-fluoride tissue-to-background ratios (TBR) of culprit and non-culprit lesions. The culprit lesion was determined by an interventional cardiologist on the basis of clinical and invasive angiographic data. For each patient a negative referent plaque was also determined and the maximal TBR (TBRmax) measured. Positive plaques were then defined as those with a TBRmax >25% higher than the referent lesion. In this setting increased 18F-fluoride uptake was detected in the culprit plaque of 37 of the 40 patients (93%). In stark contrast, myocardial 18F-FDG uptake prevented accurate plaque assessment in 22 (52%) patients with the remaining 18 patients showing no overall significant difference between the maximum TBRs in the culprit and referent plaques.

Whilst the above results suggest 18F-fluoride holds major promise in identifying plaques associated with rupture and myocardial infarction, this technique will only prove of clinical use if it can identify such plaques prospectively, before they cause an event. In order to investigate this further, PET-CT imaging was performed in a second group of 40 patients with clinically stable coronary disease scheduled to undergo elective invasive coronary angiography. The morphological characteristics of those plaques with normal and increased tracer uptake were then assessed invasively using radiofrequency, ‘virtual histology’ intravascular ultrasound (VH-IVUS). Again, interpretation of 18F-FDG was limited by myocardial spillover and increased uptake could be determined in only 4 vascular territories—each the site of previous revascularization. In contrast, regions of increased focal 18F-fluoride uptake were detected in 18 patients with 11 of these subjects showing more than one site of enhancement. These plaques were predominantly non-obstructive but demonstrated multiple high-risk features on VH-IVUS imaging including positive remodelling, microcalcification and a large necrotic core (Figure 2). Intriguingly, plasma high-sensitivity cardiac troponin I (hsTnI) concentrations were also higher in those with increased 18F-fluoride uptake. This provides further evidence to support 18F-fluoride PET as a marker of increased cardiovascular risk and also raises the possibility that the myocardial injury detected in these patients might relate to sub-clinical plaque rupture.

Finally we sought to confirm pathologically that 18F-fluoride uptake is increased in plaques with high-risk features. To facilitate this we examined patients undergoing carotid endarterectomy for symptomatic carotid artery disease. A total of 9 carotid specimens were excised and underwent ex vivo 18F-fluoride PET imaging and extensive histological analysis. In each case tracer uptake was localized to regions of macroscopically determined plaque rupture (often in the presence of adherent thrombus), was associated with increased calcification activity (as assessed by alkaline phosphatase staining) and was again linked to high-risk plaque features, specifically increased evidence of plaque inflammation (identified by CD68 staining for macrophages), and cell death (determined by markers of apoptosis).

In summary, this study has demonstrated the potential that 18F-fluoride PET-CT imaging holds in detecting ruptured and high-risk plaques in the coronary arteries. It builds upon previous studies that have demonstrated a close association between 18F-fluoride and both Framingham risk and CT calcium scores (11,12). Moreover it complements the recent work using 18F-fluoride as a marker of newly developing valvular calcium in aortic stenosis (13) with uptake predicting the progression of CT calcium scores at 1 year and once again correlating with histological markers of calcification activity (14). The stage is now set for larger prospective trials to confirm whether 18F-fluoride PET detects plaques with a propensity to rupture, and in so doing identifies patients at risk of myocardial infarction. Additional studies will also help describe the natural history of this marker of vulnerability and determine if this can be modified with targeted therapies.

Fortunately two studies designed to provide this information are under way. The Prediction of Recurrent Events with 18F-Fluoride to Identify Ruptured and High-Risk Coronary Artery Plaques in Patients with Myocardial Infarction (PRE18FFIR) Study (NCT02278211) is a multi-center observational study that will follow 700 high risk patients with coronary artery disease for 2 years to determine whether baseline 18F-fluoride PET imaging can identify patients who go on to sustain myocardial infarction and predict coronary arterial disease progression. Meanwhile the Dual Antiplatelet Therapy to Inhibit Coronary Atherosclerosis and Myocardial Injury in Patients with Necrotic High-risk Coronary Plaque Disease (DIAMOND) Study (NCT02110303) will be the first randomized controlled trial to examine the relationship between 18F-fluoride uptake and high sensitivity troponin concentrations and whether the latter can be modified through the use of potent antiplatelet agents. It is in ongoing investigations such as these that the ultimate value of this imaging tool will be determined.

In contrast to 18F-fluoride, our study has raised doubts as to the future role of coronary 18F-FDG imaging. Previous studies have established 18F-FDG as a useful marker of vascular inflammation in the carotid and other extra-cardiac arteries (15,16). Indeed 18F-FDG carotid uptake has been used as an end-point in several pharmacological intervention trials (17,18). However, the extent of myocardial uptake (despite techniques aimed at minimizing it) presents a substantial, and we suspect insurmountable, limitation to the assessment of coronary plaques with this agent. Alternative tracers that more specifically target inflammation and macrophages are, therefore, keenly awaited. These include 68Ga-[1,4,7,10-tetraazacyclododecane-N,N',N'',N'''-tetraacetic acid]-d- Phe1,Tyr3-octreotate (DOTATATE), 11C-PK11195, 18F-fluoromethylcholine (18F-FMCH), and 11C-choline, and the reader is pointed to the excellent review by Tarkin et al. for a summary of the current status of these agents (9).

Cardiovascular risk prediction at an individual patient level has been slow to progress beyond the traditional markers that have been acknowledged for more than half a century. Contrary to this, our therapeutic armamentarium has expanded progressively in recent decades. If novel therapies are to achieve the optimal balance of risk and benefits they must be targeted at those most likely to experience a vascular event in the short-term. 18F-fluoride holds major promise in its ability to identify high-risk vulnerable plaque and in so doing identifying patients at risk of myocardial infarction. If future studies confirm this potential, then this approach may play an important clinical role in stratifying patients and tailoring the therapy that they receive.