Atrial fibrillation (AF) is the most common non-benign arrhythmia in clinical practice, and the prevalence, fatality (heart failure), and disability (stroke) rates remain high (1-3). The atrial remodeling is the core part of AF, and the activation of the renin-angiotensin-aldosterone system (RAAS) is the key to the atrial remodeling (4). As a multi-factorial disease, serum uric acid (UA) is also one of the independent related factors of AF (5). Studies (6,7) have confirmed that the increased serum levels of UA are correlated with the activation of the circulating RAAS in patients with hypertension. Therefore, we speculated that UA might also be involved in the pathophysiological process of atrial remodeling by activating the circulating RAAS, thereby promoting the occurrence and development of AF. The aim of the present study was to verify the above speculation. We present the following article in accordance with the MDAR checklist and the STROBE reporting checklist (available at: http://dx.doi.org/10.21037/cdt-20-830).

The study was conducted in accordance with the Declaration of Helsinki (as revised in 2013). The study was approved by Ethics Committee of Beijing Hepingli Hospital (No. 20190109) and informed consent was taken from all the patients.

The study objects were selected from the outpatients and those who came for health examination to Beijing Anzhen Hospital and Beijing Hepingli Hospital from January 1, 2019, to December 31, 2019. A total of 233 subjects were enrolled, with 116 males and 117 females. The ages ranged between 42–89 years with an average age of 64±8.0 years. The subjects were divided into three groups, of which 84 cases were in the sinus rhythm group (SR), 76 cases were in the paroxysmal AF group (pAF, with the duration ≤7 days and could be terminated spontaneously), and the persistent AF group (PAF, with the duration >7 days and non-self-limiting) with 73 cases (8). The exclusion criteria were those with gout, tumor, infection, heart failure, chronic kidney disease, diabetes, blood system disease, and use of thiazide diuretics.

The laboratory and auxiliary examinations

After the patients were enrolled, those taking ACEI/ARBs should stop these for at least two weeks. Five mL of venous blood from the anterior elbow was drawn in the early morning while sitting and under a fasting condition. The automatic biochemical analyzer (LX20 biochemical analyzer, Beckman Coulter, USA) was used to determine the serum UA, aspartate aminotransferase (AST), blood creatinine (CREA), and other biochemical indicators. Radioimmunoassay was used to determine the plasma levels of renin (Renin), Angiotensin II (Ang II), and Aldosterone (Ald). Echocardiography was adopted to record the left atrium anteroposterior diameter (LAD), left ventricular end-diastolic diameter (LVEDD), and left ventricular ejection fraction (LVEF).

The measurement data were expressed by (). The t-test was used to compare the means of two samples, and the χ2 test was used to compare the composition ratio between the two samples. One-way analysis of variance (one-way ANOVA) was used for the comparison of the means among multiple samples, the SNK (Student-Newman-Keuls) method was used for comparison between groups, and the Kruskal-Wallis test was used for the comparison of composition ratios among multiple samples. Pearson correlation analysis was adopted to investigate the correlation between the UA level and various clinical laboratory indicators. A multiple linear regression model was used for multivariate analysis. The SPSS for Windows 21.0 statistical software was used for data analysis, and P<0.05 was considered statistically significant.

As demonstrated in Table 1, in terms of the general characteristics, the age in the PAF group was significantly higher than that in the SR and the pAF group (P<0.001). For other indicators such as the SBP, DBP, BMI, and the proportion of drugs administration, there was no statistical difference among the three groups in the analysis of variance (P>0.05 in all). 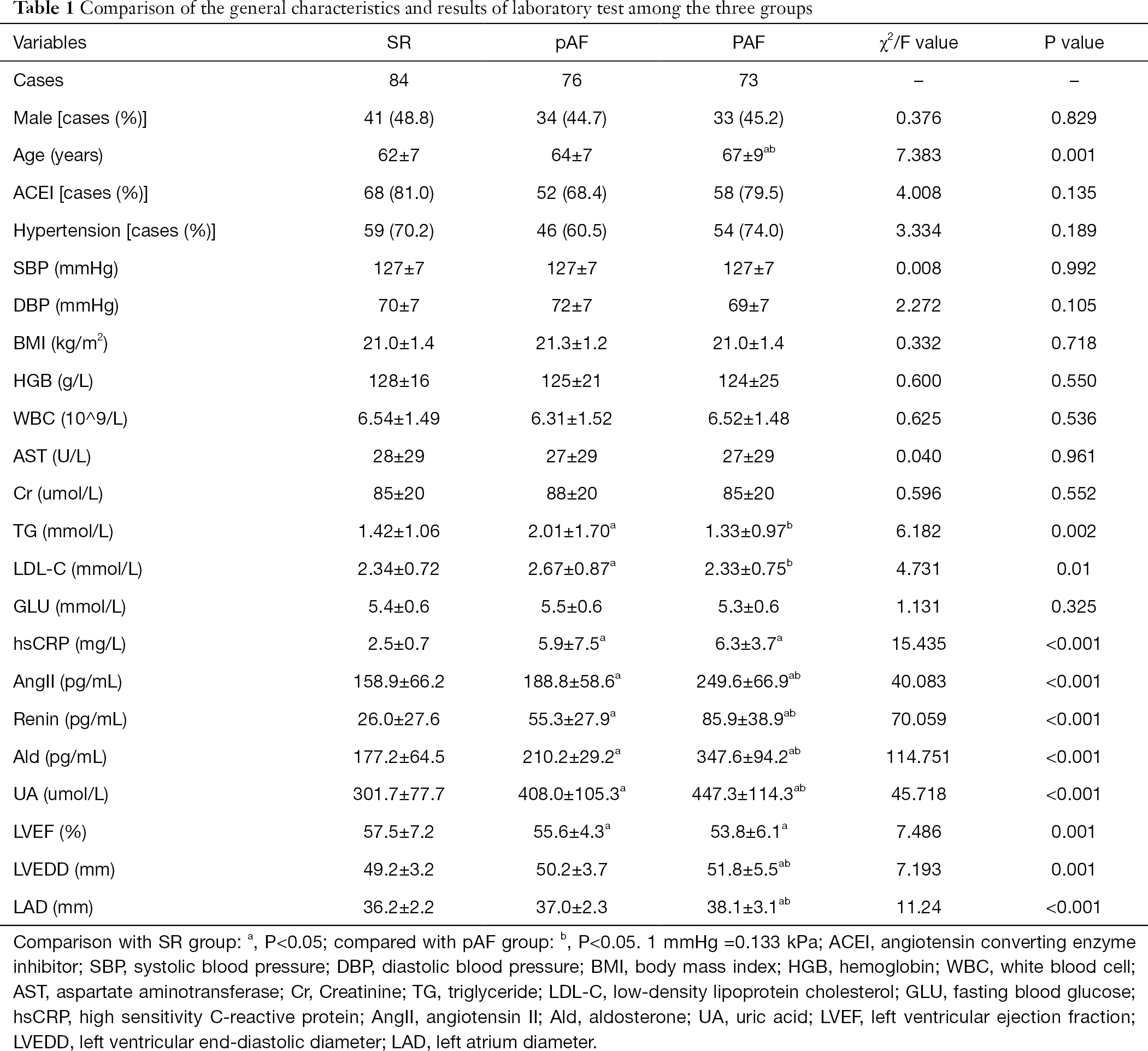 Analysis of the UA related factors

As a multi-etiological, multi-factorial disease, the relationship between AF and the serum levels of UA has been one of the hot research fields in recent years (9,10). A previous study (11) has shown that UA might be one of the independent risk factors for AF, but the mechanism of causing AF is unclear and tends to be correlated with the inflammation activation and increased oxidative stress caused by elevated serum levels of UA (12). In patients with AF, the relationship between the level of UA and the activation of the RAAS system has not been reported in domestic and foreign literature.

The univariate analysis of the present study also found that LVEDD and LAD in the PAF group were significantly higher than those in the SR group and the pAF group, and hsCRP and LVEF also had significant changes in the PAF group compared with the SR group. These results indicated that in the PAF stage, due to the long-term loss of atrial contraction, the left atrial pressure load would increase with the left atrium enlargement and fibrosis, and finally, the structural remodeling of the left atrium and left ventricle would occur, which might further promote the self-maintenance of AF. With the left ventricular remodeling, the systolic function declines. This process is accompanied by the activation of inflammation, which is manifested by a decrease in LVEF and an increase in hsCRP (13).

Correlation analysis in the present study found that during the process of AF from absence to presence, from paroxysmal to continuous, the serum levels of UA demonstrated varying degrees of correlation with hsCRP, AngII, Renin, Ald, LVEDD, LAD, and LVEF. This further suggested that the serum UA, RAAS activation, inflammation, and cardiac structural remodeling might be closely correlated with the occurrence and development of AF (14,15).

In multivariate analysis, the multiple linear regression model was adopted. It was found that UA was not only an independent risk factor for Renin but also an independent risk factor for Ang II and Ald, suggesting that the UA level might be closely correlated with the activation of RAAS, which meant that during the occurrence and development of AF, the role of UA was likely to be realized through the RAAS activation. With the RAAS activation, the increased production of Renin and Ang II can regulate the Ca2+ and K+ currents in the cardiomyocytes, shorten the duration of action potentials, and trigger the atrial electrical remodeling. In addition, the RAAS activation can lead to atrial remodeling (16,17). Animal experiments found that a small dose of Ang II infusion for 2–6 weeks could cause myocardial fibrosis. Ald has a more significant effect on AF, which is the strongest known substance that can promote the myocardial fibrosis and is also correlated with myocardial inflammation and hypertrophy of myocardial cells. The incidence of AF in patients with primary aldosteronism is 12 times that of patients with ordinary hypertension, and the main mechanism is that Ald might promote atrial remodeling (18,19).

The mechanisms for UA in RAAS activation were as follows: (I) up-regulation of the mRNA expression of angiotensinogen. UA enters the vascular smooth muscle cells through the uptake of organic anion transporters, increases the expression of the A chain/C chain of the platelet-derived growth factor (PDGF), promotes the production of thromboxane and cyclooxygenase-2, and induces the activation of specific mitogen-activated protein kinase (MAPK) pathway, thus the mRNA expression of angiotensinogen increases (20). (II) UA can also enter the endothelial cells of the human umbilical vein through the organic anion transporters and rapidly induce oxidative stress, which in turn activates the local RAAS system and increases the production of Ang II (21).

Another finding in the present study was that in the pAF group, the serum TG and LDL-C levels were significantly higher than those in the SR group, but were significantly lower in the PAF group. These were not difficult to understand. It is currently believed that the risk factors for AF are basically the same as those for coronary heart disease (22). In the SR stage, TG and LDL-C promote the occurrence of AF through the mechanism of promoting atherosclerosis, which manifests as the increase of TG and LDL-C in the pAF stage. At this stage, the patient noticed the onset of AF and took the lipid-lowing drugs, but in the PAF stage, it shows a significant decrease in TG and LDL-C.

We would like to acknowledge the hard and dedicated work of all the staff that implemented the intervention and evaluation components of the study.

Funding: This study was funded by Beijing Hepingli Hospital (2019-1-01). The funding body had no role in the design of the study and collection, analysis, and interpretation of data and in writing the manuscript.

Reporting Checklist: The authors have completed the MDAR checklist and the STROBE reporting checklist. Available at: http://dx.doi.org/10.21037/cdt-20-830

Conflicts of Interest: All authors have completed the ICMJE uniform disclosure form (available at: http://dx.doi.org/10.21037/cdt-20-830). The authors have no conflicts of interest to declare.

Ethical Statement: The authors are accountable for all aspects of the work in ensuring that questions related to the accuracy or integrity of any part of the work are appropriately investigated and resolved. The study was conducted in accordance with the Declaration of Helsinki (as revised in 2013). The study was approved by Ethics Committee of Beijing Hepingli Hospital (No. 20190109) and informed consent was taken from all the patients.