Fabry disease (FD) is a rare X-linked lysosomal storage disorder caused by mutations in the gene encoding for α-galactosidase A (1). FD affects multiple organs including the heart. Cardiac involvement is a major contributor of morbidity and mortality in FD (2,3). Detection of early involvement, assessment of cardiac response to treatment and evaluation of disease severity are important in FD management (4,5). Cardiovascular magnetic resonance (CMR) is a non-invasive and multi-parametric imaging modality that has the potential to detect early cardiac involvement in FD and has quickly become the reference-standard imaging method. CMR allows for a detailed assessment of regional myocardial wall thickness, myocardial mass, myocardial fat (using native T1 mapping technique to reflect sphingolipid storage), fibrosis [using the late gadolinium enhancement (LGE) technique]. In the early stage of FD, even in the absence of left ventricular hypertrophy (LVH), low native T1 values were found to sensitively indicate sphingolipid accumulation (6). When patients progress to myocardial fibrosis or triggered LVH in men, native T1 values increase and may result in “pseudonormalization” (7,8). CMR derived feature fracking (FT) is a validated quantitative method of assessing myocardial deformation which may reflect early changes of myocardial structure and function in many diseases (9). Therefore, we sought to explore the utility of CMR-FT as a measure of myocardial dysfunction in FD patients with or without LVH and/or fibrosis. We present the following article in accordance with the Materials Design Analysis Reporting (MDAR) checklist. Available at: http://dx.doi.org/10.21037/cdt-20-897.

The study was conducted in accordance with the Declaration of Helsinki (as revised in 2013). The study was approved by Beijing Anzhen Hospital ethics committee (NO.: 2019065X) and informed consent was taken from all the patients.

Twenty patients with genetically confirmed FD were prospectively enrolled. None of the patients with FD had received enzyme replacement therapy prior to the study entry. Exclusion criteria included prior myocardial infarction or known coronary artery disease and contraindications to CMR. Twenty healthy volunteers without history of cardiovascular disease were also enrolled as a control group.

The intra- and inter-observer variability for the LV strain indices were assessed by the intraclass correlation coefficient (ICC) in all patients. Intra-observer reproducibility was established by the same observer who re-analyzed all patients’ images after one month. Inter-observer reproducibility was assessed by a second-independent observer blinded to the first observer’s results. 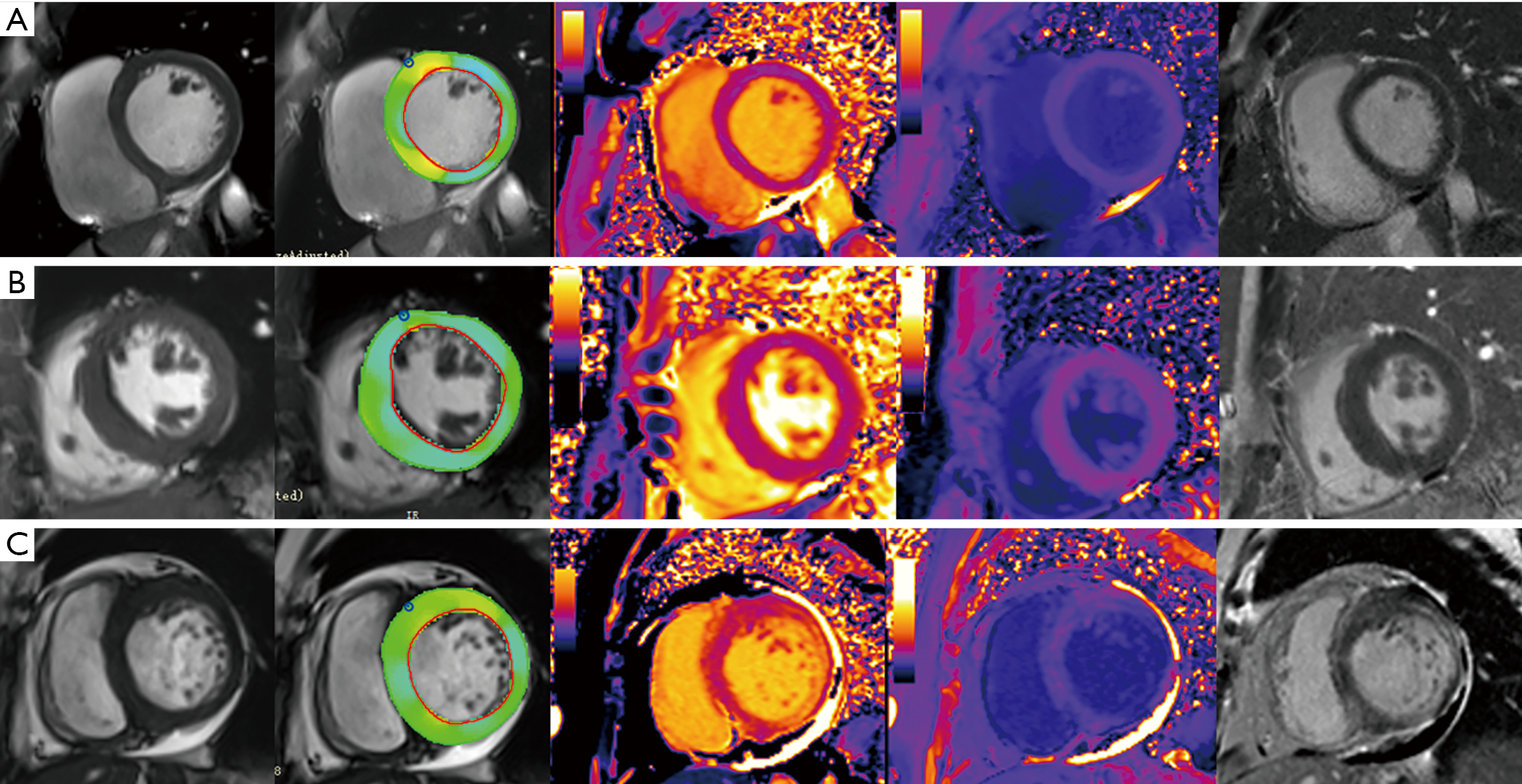 Statistical analyses were carried out using SPSS (version 22, IBM). Continuous variables are expressed as mean ± SD and categorical as frequencies or percentages. Normality was checked using the Shapiro-Wilk test. Differences between FD patients and healthy controls were compared using the paired t-test or U test or χ2 testing as indicated. Differences across three FD groups were compared with using ANOVA or Kruskal-Wallis for parametric and nonparametric variables, respectively, and χ2 testing for categorical variables. Person’s or Spearman’s correlation was performed to investigate the potential relationship between strain indices and other CMR indices (including LV functional indices, MWT, native T1, ECV) in all patients. The correlation was considered weak if correlation coefficient was <0.5, moderate if correlation coefficient was between 0.5–0.7, and strong if correlation coefficient was >0.7. A P<0.05 was considered significant.

Baseline demographic data and CMR findings of all subjects are summarized in Table 1. There were no statistical differences of age, sex, height and weight between FD patients and healthy controls (all P>0.05). Age and sex between FD patients and healthy controls also showed no statistical differences in every subgroup (Table 2). Among FD patients, 7 (35%) patients had a history of hypertension and 1 (5%) patient had a history of diabetes mellitus, 14 (70%) had LVH (mean MWT of these 14 patients was 15.2±2.0 mm) and 4 (20%) had LGE. Phenotypes and the enzymatic activity of FD patients are summarized in Table 3. 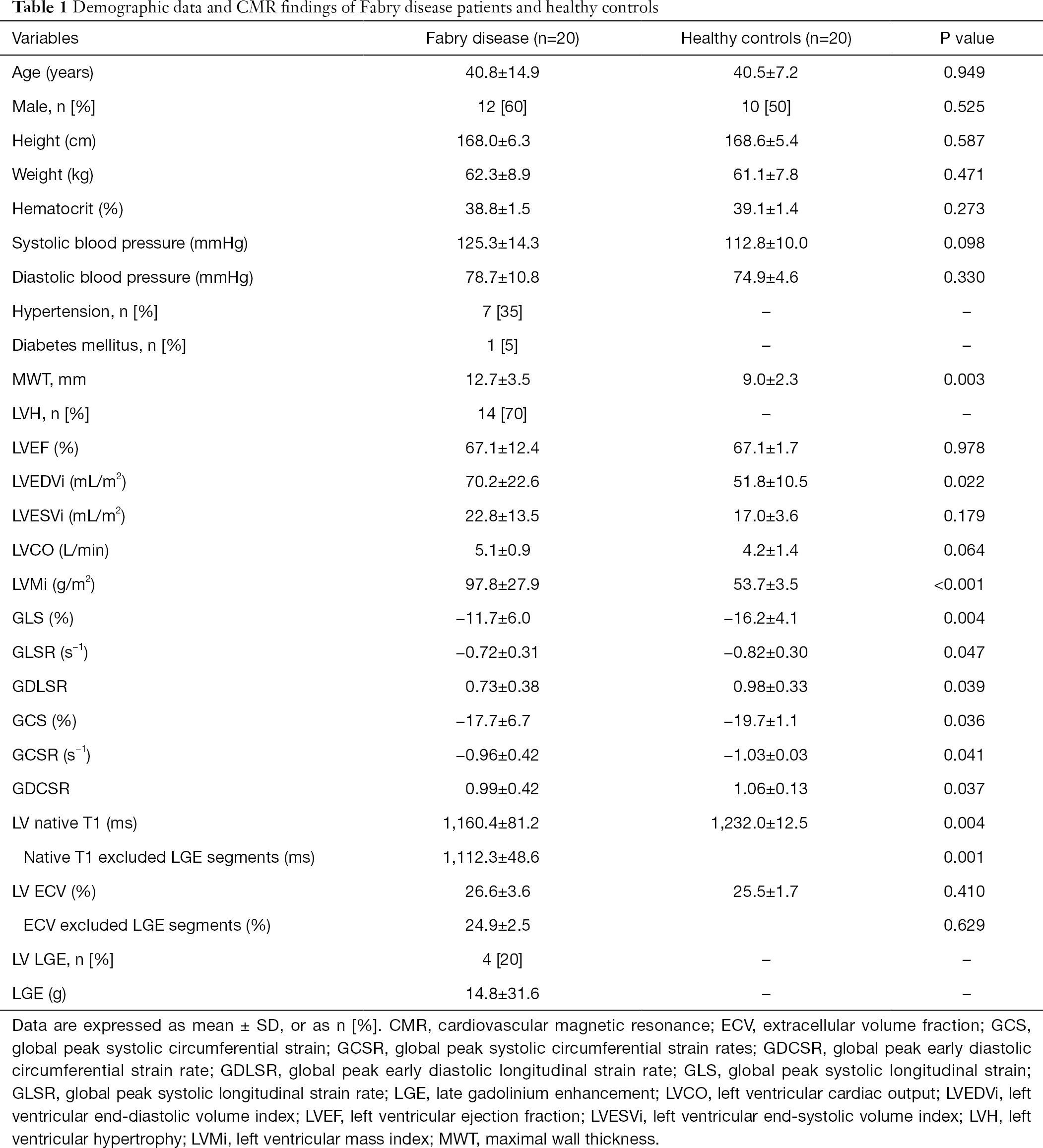 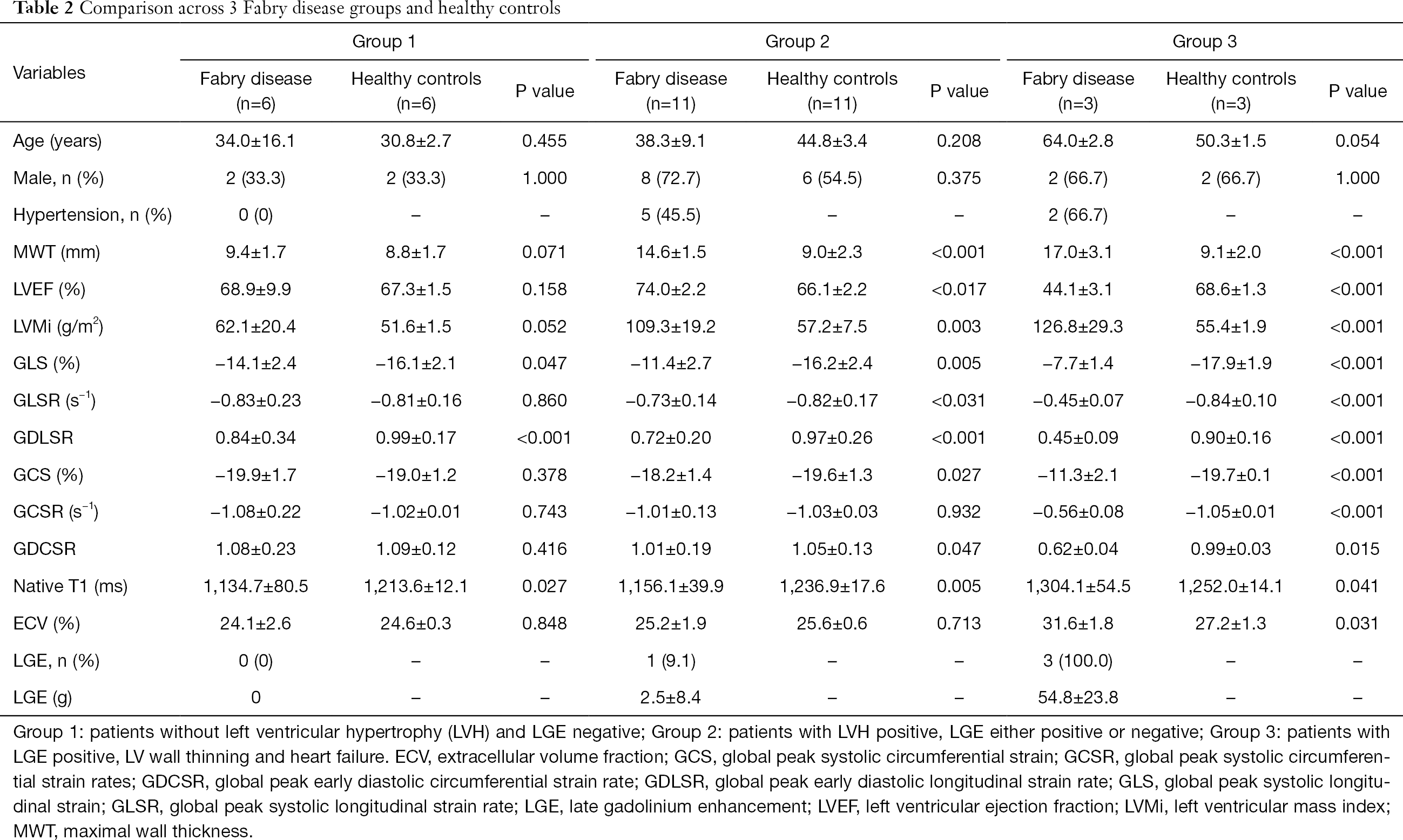 Myocardial deformation imaging findings of FD patients according to group

Compared with healthy controls, all the strain indices of FD with LVH (group 2 and group 3) were reduced (all P<0.05) except GCSR in group 2 (P=0.932), but in FD without LVH (group 1), only GLS and GDLSR were significantly lower than that of controls (all P<0.05, Table 2). Among FD groups, the strain indices impairment degree from mild to severe were group 1 < group 2 < group 3. When compared between different FD groups, there were significant differences of GLS and GCS among three groups and between each two groups (Figure 2). There were weak correlations between the LV functional parameters (LVEF, LVMi), MWT, T1 mapping indices (native T1, ECV) and LV strain indices (GLS, GLSR, GDLSR, GCS, GCSR, GDCSR) (Table 4). The strongest relation was between GDLSR and native T1 value (r=0.783, P<0.01). 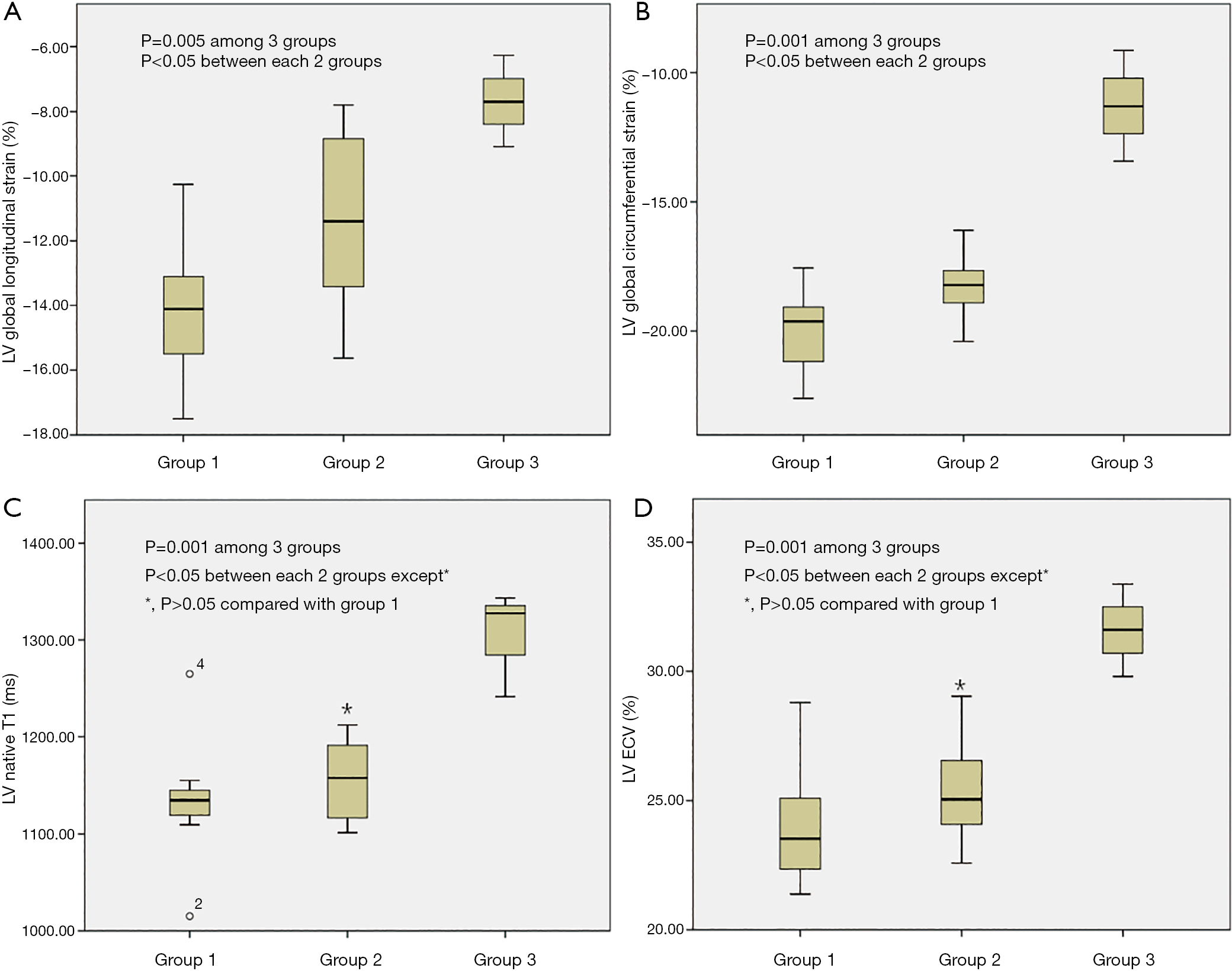 Tissue characterization findings of FD patients according to group

In this study we examined the value of CMR-FT in the assessment of myocardial deformation in patients with FD. The principal findings of our study are: (I) impaired LV strain indices occur in FD patients at all stages of the disease. The impairment severity in myocardial deformation parallels along with disease severity. (II) In the earlier stage of the disease (without LVH), both LV systolic (global peak systolic longitudinal strain) and diastolic (early diastolic longitudinal strain rate) myocardial contractility were impaired compared with the normal controls. LV longitudinal strain indices are more sensitive than circumferential strain indices in detection of the early contractile abnormality in FD. (III) Also, in the earlier stages of the disease, although LV native T1 values overlap between patients with LVH and without LVH, LV strain indices in FD patients with LVH were significantly more impaired when compared to FD patients without LVH. Therefore, the distinctive T1 reduction makes native T1 mapping a valuable screening tool for FD, however, CMR-FT strain appears to be appropriate for tracking disease severity in FD.

CMR myocardial feature tracking is a new technique that allows for precise measurement of both global and regional myocardial strain. CMR-FT has been validated against traditional tagging methods of measuring strain and has also been able to distinguish between myocardial deformations in cardiac diseases including hypertrophic cardiomyopathy (HCM), cardiac amyloidosis and myocarditis (17-20). Abnormal strain values have previously been reported in FD patients with LVH in few studies using both echocardiographic strain and CMR feature tracking (10,12,21,22). The results in our study extends these prior findings and suggest that the degree of strain abnormalities varied significantly in all three FD groups and correlated with disease severity. Myocardial inflammation, hypertrophy and fibrosis follow sphingolipid deposition in FD. Myocardial inflammation, hypertrophy and fibrosis all have an adverse impact on myocardial contractility and lead to reduced myocardial strain indices in many cardiovascular diseases (23-25). In our study, group 1 only had mild LV native T1 reduction and mild myocardial strain indices impairment; group 2, in addition to LV native T1 reduction, this group also had LVH and myocardial fibrosis (assessed by LGE), correspondingly worse myocardial strain indices; and as a late stage, group 3 had LVH, heavy myocardial fibrosis burden, heart failure, and the worst myocardial strain indices. Therefore, CMR-FT may hold promise in the monitoring of FD cardiomyopathy progression in patients with FD.

Early detection of cardiac involvement even in late-onset FD allows for appropriate treatment decisions (26). Although myocardial strain abnormalities have previously been demonstrated in FD patients with LVH and without LVH, there has been contradictory findings in prior studies. Mathur et al. found that FD patients without LVH compared with controls did not differ significantly in GLS or GCS (12). Another group assessed GLS by CMR and echocardiography in serial studies and showed that FD patients without LVH had impaired GLS (10,27,28). In this present study, we found systolic and diastolic longitudinal strain indices, global peak systolic longitudinal strain and early diastolic longitudinal strain rate respectively were lower than normal in FD patients without LVH. However, circumferential strain indices were not different compared with healthy controls. These results suggested that the myocardial mechanical impairment assessed by GLS is sensitive in detecting the early contractile abnormality. Knott et al. assessed myocardial blood flow in FD patients and found impaired myocardial perfusion even before the onset of LVH. Their results also demonstrated that the FD perfusion impairment was more pronounced in the subendocardium (8). The subendocardium of LV is longitudinal oriented fibres and the abnormality of perfusion in the subendocardium may partially explain the GLS reduction in the early stage of the disease.

Low native T1 can detect cardiac involvement in FD as it represents sphingolipid accumulation (27,29). Our results showed that average LV native T1 values even in patients without LVH (early stage) were lower than normal controls, which is in line with previous studies (7,8,10). Notably, LV native T1 values in the early stage without LVH was even lower than that in patients in the intermediate stage with LVH. Furthermore, in the late stage, average native T1 was significantly higher than normal values. Reduction of native T1 values did not track disease severity. Native T1 reflects the overall myocardial changes including the myocyte and interstitium changes. Multiple pathology of FD, such as edema, fibrosis, and LVH lead to native T1 pseudonormalization by increasing the T1 values (7). Therefore, native T1 is sensitive for screening cardiac involvement (14), but when using native T1 for follow-up treatment, the changes of T1 (either progression or regression) may need cautious interpretation due to the impact of above factors. Previous studies have shown that the myocardial ECV in FD is similar to healthy controls which our results agree with for the early and intermediate stages. Furthermore, like other cardiomyopathies in the late stage, LV ECV in FD was elevated significantly in the final stage. In FD, ECV provided similar clinical significance like most cardiovascular diseases.

There are several limitations to our study. FD is a rare disease, thus limiting the number of patients included in the study. We did not undertake myocardial biopsies in the patients to determine the lysosomal storage and myocardial fibrosis. Given the small number of patients, we were not able to compare the CMR indices between male and female in different stages. The values of myocardial strain assessed by 3D FT-CMR were lower than 2D FT-CMR (30). We used a 3D strain method, so the strain values of this study have to be interpreted within the same assessment method. Hypertension is one of the main adverse events occurring in the late stage of FD (31). We have seven patients with hypertension (five patients in group 2, two patients in group 3), LV hypertrophy, myocardial deformation and fibrosis in these patients maybe partially explained by hypertension. Future investigations are needed to investigate the effects of hypertension on the LV morphology, function and tissue characterization in FD.

Myocardial strain impairment is found in FD in all stages after diagnosis, even in the early stage, without LVH. CMR derived strain imaging may aid in the early diagnosis and appropriate management of patients with cardiac FD.

Reporting Checklist: The authors have completed the MDAR reporting checklist. Available at http://dx.doi.org/10.21037/cdt-20-897

Conflicts of Interest: All authors have completed the ICMJE uniform disclosure form (available at http://dx.doi.org/10.21037/cdt-20-897). The authors have no conflicts of interest to declare.

Ethical Statement: The authors are accountable for all aspects of the work in ensuring that questions related to the accuracy or integrity of any part of the work are appropriately investigated and resolved. The study was conducted in accordance with the Declaration of Helsinki (as revised in 2013). The study was approved by Beijing Anzhen Hospital ethics committee (NO.: 2019065X) and informed consent was taken from all the patients.