18F-fluorodeoxyglucose (18F-FDG) is a radiolabeled glucose analog. It can be transported into cells by glucose transporters and phosphorylated by hexokinases, but it cannot be metabolized further and becomes trapped in cells (1). 18F-FDG is a nonspecific radiotracer that is taken up by cells with an elevated metabolic rate and an increased number of glucose transporters compared to normal cells (2). In addition to malignant tumor cells, glucose transporters are also increased in active inflammatory cells, such as macrophages (3-5). Thus, 18F-FDG, as a marker for active inflammation, is often used for the detection of atherosclerosis in preclinical and clinical studies.

The apolipoprotein E (ApoE) gene produces ApoE to participate in the transport of cholesterol-rich lipoproteins. Knockout of the ApoE gene results in high cholesterol levels in the blood and the development of atherosclerosis (13). Because the size of the rat can provide a more detailed image in vivo and the characteristics of lipid metabolism in rats are more similar to those of humans than the mouse model (14), the ApoE−/− rat model is becoming attractive in cardiovascular system PET/CT imaging. However, there are only a few studies on atherosclerosis in the ApoE−/− rat model.

This study aimed to track the development of vascular inflammation and calcification in an early stage of atherosclerosis by 18F-FDG and 18F-NaF PET/CT imaging using a high-fat Western diet ApoE−/− rat model. However, our results showed that 18F-FDG PET imaging failed to visualize inflammation in early atherosclerotic lesions but instead might reveal hypoxia in the aortic arch.

We present the following article in accordance with the ARRIVE reporting checklist (available at http://dx.doi.org/10.21037/cdt-20-609).

Ethical approval for this original research was obtained from the General Hospital of Ningxia Medical University Animal Ethics Committee (2013-0301), in compliance with national or institutional guidelines for the care and use of animals.

A total of 23 rats were used in this study. For the ApoE group, 19 male ApoE−/− rats were purchased from Biocytogen (through TALEN technology; Beijing Biocytogen Co., Ltd., Beijing, China). As a control group, three male Sprague-Dawley (SD) rats were purchased from the experimental animal center in the Affiliated Hospital of Southwest Medical University. One male SD rat aged 12 weeks purchased from Southeast University was used for a magnetic resonance imaging (MRI) study. The rats of the control group and ApoE group arrived at 9 weeks of age. Normal SD rats were housed in 1 cage, and ApoE−/− rats were housed with 5 individuals per cage and a 12-h light interval at 21 °C. ApoE−/− rats and SD rats were fed a normal diet (LAD1000M, Trophic Animal Feed High-tech Co., Ltd., China) after arrival. Then, the ApoE−/− rats were gradually changed to a Western-type diet (TP26305, Trophic Animal Feed High-tech Co., Ltd., China; 4.5 kilocalories/g, energy composition: 42% fat, 14% protein, 44% carbohydrate, 0.2% cholesterol) from 13 weeks of age. Diet and water were provided ad libitum. The rats were weighed at 12, 27, and 46 weeks of age before PET/CT scanning.

Blood samples were taken from the tail veins of the rats at 12, 27, and 46 weeks of age. Before blood sampling, rats have fasted for 12 h. Blood was collected in a heparin tube, and plasma was obtained by centrifugation of the blood at 3,000 rpm for 15 minutes at 4 °C. Total cholesterol (TC), triglyceride (TG), low-density lipoprotein cholesterol (LDL-C), and high-density lipoprotein cholesterol (HDL-C) levels were analyzed using an AU680 Automatic Biochemistry Analyzer (Beckman Coulter, USA).

The control group (n=3) and ApoE group (n=19) underwent PET/CT scans at 12, 27, 46 weeks of age using a PET/CT scanner (Inveon, Siemens, Munich, Germany). The study protocol is presented in Figure 1. The rats were fasted for 12 h before 18F-FDG PET/CT scanning. Before scanning, the rats were anesthetized with 1–2% isoflurane, and 18F-FDG (30.5±8.3 MBq) was injected intravenously through the tail vein. After CT scanning, PET images were acquired at 60 minutes after injection for 30 minutes of static scanning. 18F-NaF PET/CT (31.2±6.6 MBq) was conducted 1 day after 18F-FDG PET/CT scanning using the same scanning protocol.

For the MRI study, a rat was anesthetized with 1–2% isoflurane. The MRI data were collected on a 7T Bruker Biospin scanner (Bruker, Ettlingen, Germany). The T1-weighted images were acquired in a 2D acquisition type, repetition time (TR) 500 ms, echo time (TE) 10 ms, number of excitations 4, slice thickness 1 mm, and field of view 3.5×3.5 cm and stored in a 256×256 matrix. 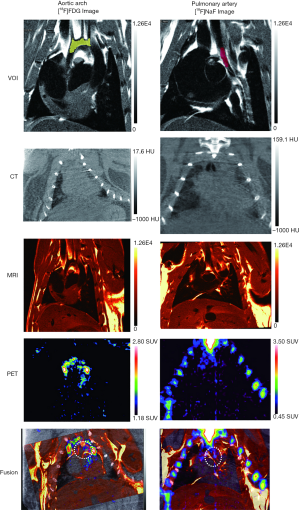 The PET and CT images were manually co-registered with the MRI template and analyzed using Inveon Research Workplace Image Analysis software (Figure 2). The 18F-FDG and 18F-NaF uptake of the aortic arch and pulmonary arteries were respectively assessed based on the atlas VOIs drawn by MRI. In each VOI, the mean standardized uptake value (SUVmean) and the maximum standardized uptake value (SUVmax) were automatically measured by the software.

ApoE−/− rats were euthanized by cardiac puncture at 46 weeks after PET/CT scanning. The aortic arch and pulmonary arteries were observed under a dissection microscope. The artic arch and left pulmonary artery were excised, fixed in 4% paraformaldehyde, and embedded in paraffin. Each section was cut into 4-µm-thick slices. Adjacent slices were subjected to hematoxylin and eosin (HE) staining for overall morphology, alizarin red (NovaUltra Alizarin Red Stain Kit, IW-3001, IHC World, USA) staining for calcium, immunohistochemical staining with a CD68 antibody (BA3638; Boster, Wuhan, China) for inflammation, and immunohistochemical staining with a hypoxia-inducible factor-1 alpha (HIF-1α) antibody (PA1-16601, Thermo Fisher Scientific, USA) for hypoxia. Images were acquired with an optical scanner for qualitative and quantitative analysis. The integrated optical density (IOD) and positive area of each component were assessed in each slice using ImageJ software (http://rsb.info.nih.gov/ij). The IOD value and the positive area of each section were determined by taking the average of these slices.

Data values are expressed as the mean ± standard deviation. Statistical analyses were performed using OriginPro 2018 software (Origin Lab Corporation, Northampton, MA, USA). The normality of the data distribution was tested by the Kolmogorov-Smirnov test. Differences between groups were analyzed using one-way analysis of variance (ANOVA) with a Tukey post-hoc test for normally distributed continuous data. For non-parametric data, data were analyzed by Kruskal-Wallis ANOVA with Dunn’s post-hoc test. For all the tests, P<0.05 was considered to be statistically significant. 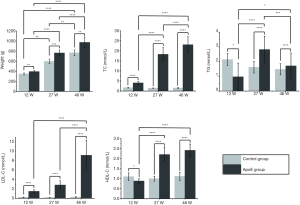 18F-FDG PET/CT and 18F-NaF PET/CT images are presented in Figures 2,4. The PET/CT imaging results showed that in the cardiovascular system, 18F-FDG accumulated in the aortic arch, while 18F-NaF accumulated in either/both sides of the pulmonary arteries (Figure 4A). 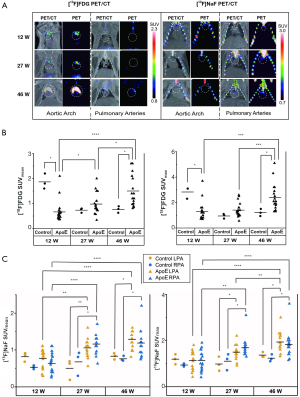 As shown in Figure 5, atherosclerotic lesions developed in the left and right pulmonary arteries of ApoE−/− rats. These lesions were at the early stage of atherosclerosis with fatty streaks. In the aortic arch of ApoE−/− rats, only neointimal hyperplasia was observed under a surgical microscope and on histological sections. 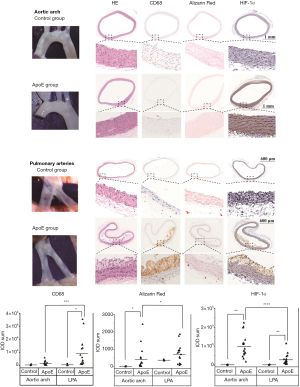 The availability of noninvasive imaging methodologies combining PET and CT provides the opportunity to understand the development and progression of atherosclerosis in vivo. 18F-FDG and 18F-NaF are two commonly used PET tracers that have already been used in clinical studies to investigate the mechanisms of atherosclerosis. 18F-FDG was reported to accumulate in metabolically active macrophages and was widely used to detect active inflammation (3-5), while 18F-NaF was used to identify active calcification (9-12). In this study, we monitored the formation of atherosclerotic plaques by using 18F-FDG and 18F-NaF PET/CT to visualize vascular inflammation and calcification. We assumed that 18F-FDG, as an index of vascular inflammation, would first accumulate in the vasculature and that 18F-NaF uptake, which is related to calcification, would appear at the same site later. However, in contrast to our prediction, although 18F-FDG uptake did appear earlier than 18F-NaF uptake, the two tracers were not present in the same arteries. 18F-FDG accumulated in the aortic arch, while 18F-NaF accumulated in the pulmonary arteries. CD68 staining showed that pulmonary arteries with higher inflammatory activity had no 18F-FDG accumulation. Another study also reported that there was no 18F-FDG accumulation in advanced atherosclerotic lesions of ApoE−/− mice (24). No correlation between 18F-FDG uptake and CD68 expression levels in atherosclerosis studies was reported by Myers et al. (25). Hypoxia, rather than inflammation, has been suggested to cause 18F-FDG accumulation (26). It has been reported that 18F-FDG uptake is correlated with HIF-1α gene expression in human atherosclerotic carotid lesions (27-29). Therefore, in this study, HIF-1α staining was employed to identify hypoxia. The results indicated that the aortic arch with high 18F-FDG uptake had significantly higher expression of hypoxia than pulmonary arteries with no 18F-FDG uptake. Therefore, we proposed that 18F-FDG reflects hypoxia rather than inflammation in early atherosclerotic lesions of ApoE−/− rats. The increase in 18F-FDG uptake in the aortic arch with age reflects the increase in hypoxia during the process of atherogenesis. 18F-NaF correlated well with microcalcifications in lesions and accumulated at more severe atherosclerotic lesions in the pulmonary arteries. 18F-NaF PET/CT is a promising method to detect damage associated with vascular endothelial injury.

This study had some limitations. The spatial resolution of PET is not high enough to determine the exact location of the uptake of the tracer. Though we used atlas-based VOIs, the location of arteries may not be accurate enough. For example, the high 18F-FDG uptake in the aortic arch of the control group at 12 weeks of age may be attributed to the spill-out effect of 18F-FDG physiological uptake in the thymus gland (30). Autoradiography studies should be included in future studies. Although the accumulation of 18F-FDG correlates with hypoxia rather than inflammation in rodent models, this may not be the case in humans. Further studies are needed. However, one should be very cautious in using the nonspecific PET tracer 18F-FDG as an inflammation indicator in future studies.

Strikingly similar to the process of atherogenesis in humans, the ApoE−/− rat model provides a fertile source for the investigation of atherosclerotic plaques. In this study, we found that ApoE−/− rats fed a high-fat Western diet could develop early atherosclerotic lesions in the pulmonary arteries. However, 18F-FDG accumulates in the aortic arch with high expression of hypoxia rather than inflammatory lesions in the pulmonary arteries. Thus, this longitudinal 18F-FDG and 18F-NaF PET/CT study showed the accumulation of hypoxia and microcalcifications at lesion sites in vivo during the process of atherogenesis.

The authors gratefully acknowledge Dan Zhao from the Radiology Department of Guangdong Hospital of Traditional Chinese Medicine for assistance with imaging analysis.

Funding: This work was supported by the National Natural Science Foundation of China (81360226).

Reporting Checklist: The authors have completed the ARRIVE reporting checklist. Available at http://dx.doi.org/10.21037/cdt-20-609

Conflicts of Interest: All authors have completed the ICMJE uniform disclosure form (available at http://dx.doi.org/10.21037/cdt-20-609). The authors have no conflicts of interest to declare.

Ethical Statement: The authors are accountable for all aspects of the work in ensuring that questions related to the accuracy or integrity of any part of the work are appropriately investigated and resolved. Ethical approval for this original research was obtained from the General Hospital of Ningxia Medical University Animal Ethics Committee (2013-0301), in compliance with national or institutional guidelines for the care and use of animals.