LA strain measures the extent of myocardial deformation and is less subject to loading conditions than volumetric indices (5). LA reservoir strain represents the phase of pulmonary venous return during ventricular systole. LA booster strain corresponds to active atrial contraction, and accounts for the late-diastolic augmentation in ventricular filling which is absent in atrial fibrillation (AF). CMR feature tracking allows fast and reproducible assessment of LA strain from routine cine images (6). LA reservoir strain has been shown as an independent prognostic marker after acute myocardial infarction (MI) (7), however further studies are needed to validate these findings. The aim of this study was to assess whether CMR derived LA strain and volumetric indices predicted MACE after STEMI. We hypothesized that impaired LA function would be associated with worse outcomes.

The study was conducted in accordance with the Declaration of Helsinki (as revised in 2013). The study was approved by the Human Research Ethics Committee at Concord Hospital, Sydney Australia (HREC/11/CRGH/224; approval CH62/6/2011-151) and informed consent was taken from all the patients.

All CMR analysis was performed offline using commercially available software (CVI42 version 5.11, Circle Cardiovascular Imaging, Calgary, Canada). LVEF, infarct scar size, microvascular obstruction (MVO) and myocardial salvage index (MSI) were measured as previously reported (8). Infarct size was defined as the hyper-enhanced area with signal intensity threshold ≥5 standard deviation (SD) above a region of interest of normal ‘nulled’ myocardium and expressed as a percentage of the total left ventricular (LV) mass (9-11). MVO was determined by manual contouring of areas of hypo-enhancement with surrounding hyper-enhanced myocardium on the delayed enhancement inversion recovery sequences (9,12). Area at risk was defined as the volume of hyper-enhanced myocardium (≥2 SD of the region of interest) on T2 short tau inversion recovery sequences, divided by the total myocardial volume. MSI was calculated as: (area at risk − infarct scar size)/area at risk (9).

LA volumetric indices were measured by manually tracing the LA endocardial border in end-systole and end-diastole in long-axis two- and four-chamber views. Maximum and minimum LA volumes were calculated based on the biplane area-length method (13) and indexed to body surface area (LAVImax and LAVImin). LAEF was defined as: [(LAVImax − LAVImin)/LAVImax] ×100.

LA strain was performed using CVI42 Tissue Tracking software (Circle Cardiovascular Imaging v5.11, Calgary, Canada). LA endocardial and epicardial borders were manually traced in end-systole in long-axis two- and four-chamber views. An automated tracking algorithm was applied, and manual adjustments were performed as needed to attain optimal wall tracking. The strain values for each tissue point were automatically derived by the software and were represented as a strain curve from which LA reservoir strain and LA booster strain were recorded (Figure 1). LA strain values were calculated based on the average of three independently repeated measurements. 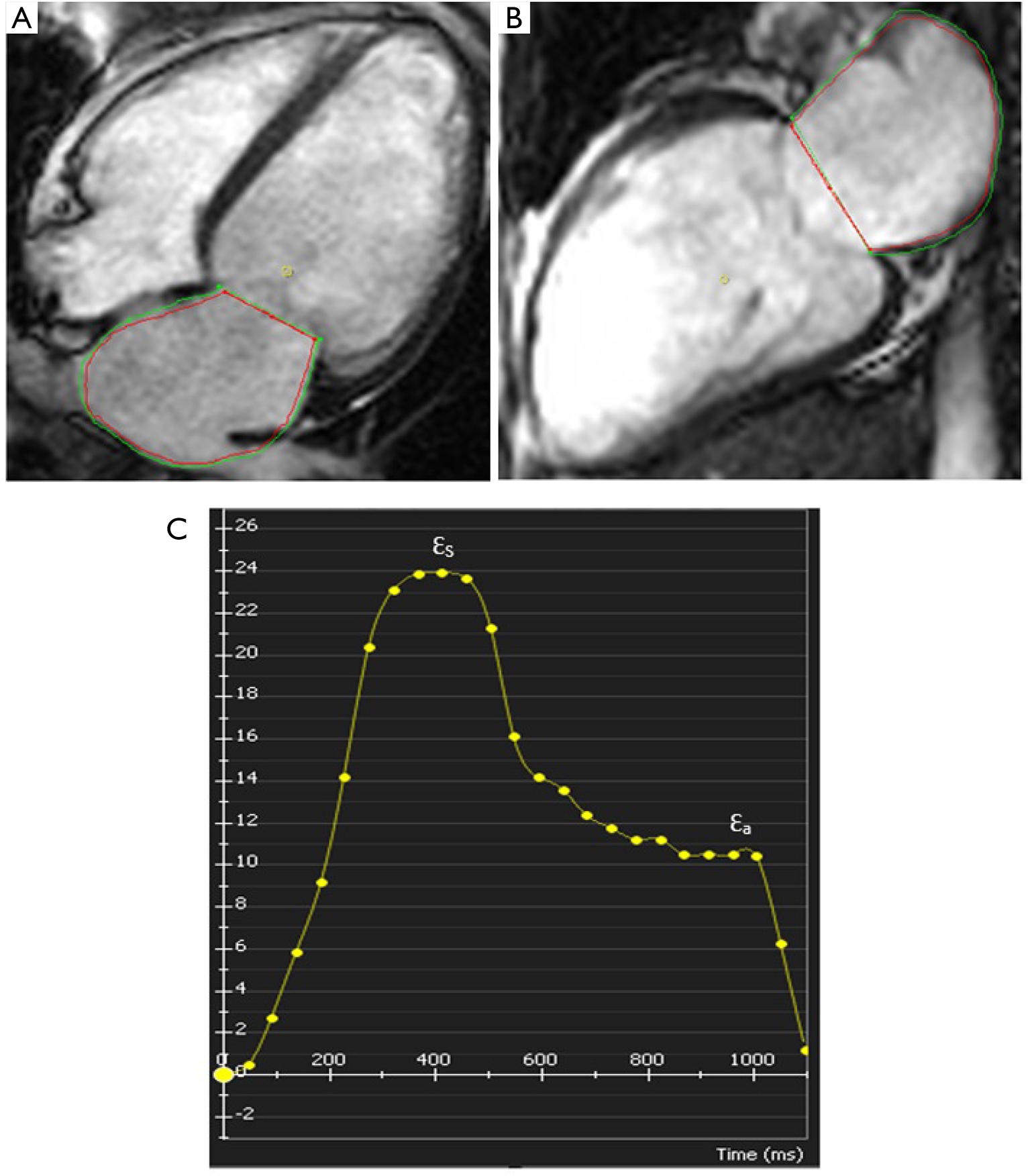 LA volumetric and strain analysis was performed by one experienced observer blinded to clinical and CMR data. Inter-observer and intra-observer variabilities were assessed in 20 random healthy subjects by two investigators, blinded to the first set of measurements.

The primary endpoint of MACE was a composite of all-cause mortality, reinfarction, new or worsening heart failure, stroke, and sustained ventricular arrhythmias. For patients with more than one MACE, the primary endpoint was determined as time to first event. Detailed outcome definitions have been reported previously (16).

Receiver operator characteristic analyses were performed and area under the curve (AUC) calculated and compared using the De Long test. For evaluating the primary endpoint, Kaplan-Meier survival analysis was performed, and differences were assessed by the log-rank test. Cutoffs for high-risk groups were determined by the Youden index (17). Univariate and multivariate Cox proportional hazards regression models were performed to calculate hazard ratios (HR) with corresponding 95% confidence intervals (CI). The multivariate model comprised variables with P<0.05 at univariate analysis. Inter-observer and intra-observer variabilities were assessed by intraclass correlation coefficients (ICC) and coefficients of variation (COV).

Four hundred and nine consecutive STEMI patients were screened during the study period, of which 265 were enrolled; 29 patients could not undergo CMR, 16 had incomplete CMR data or poor image quality for feature tracking assessment, 12 withdrew consent, and 6 were lost to follow-up, resulting in 202 patients being included in this study (Figure 2). 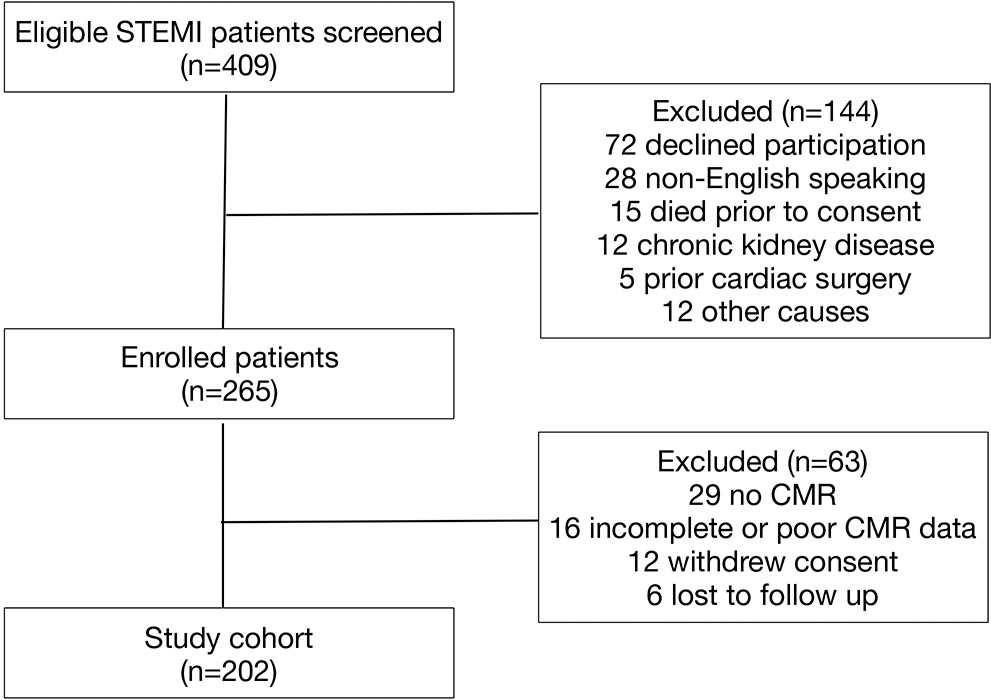 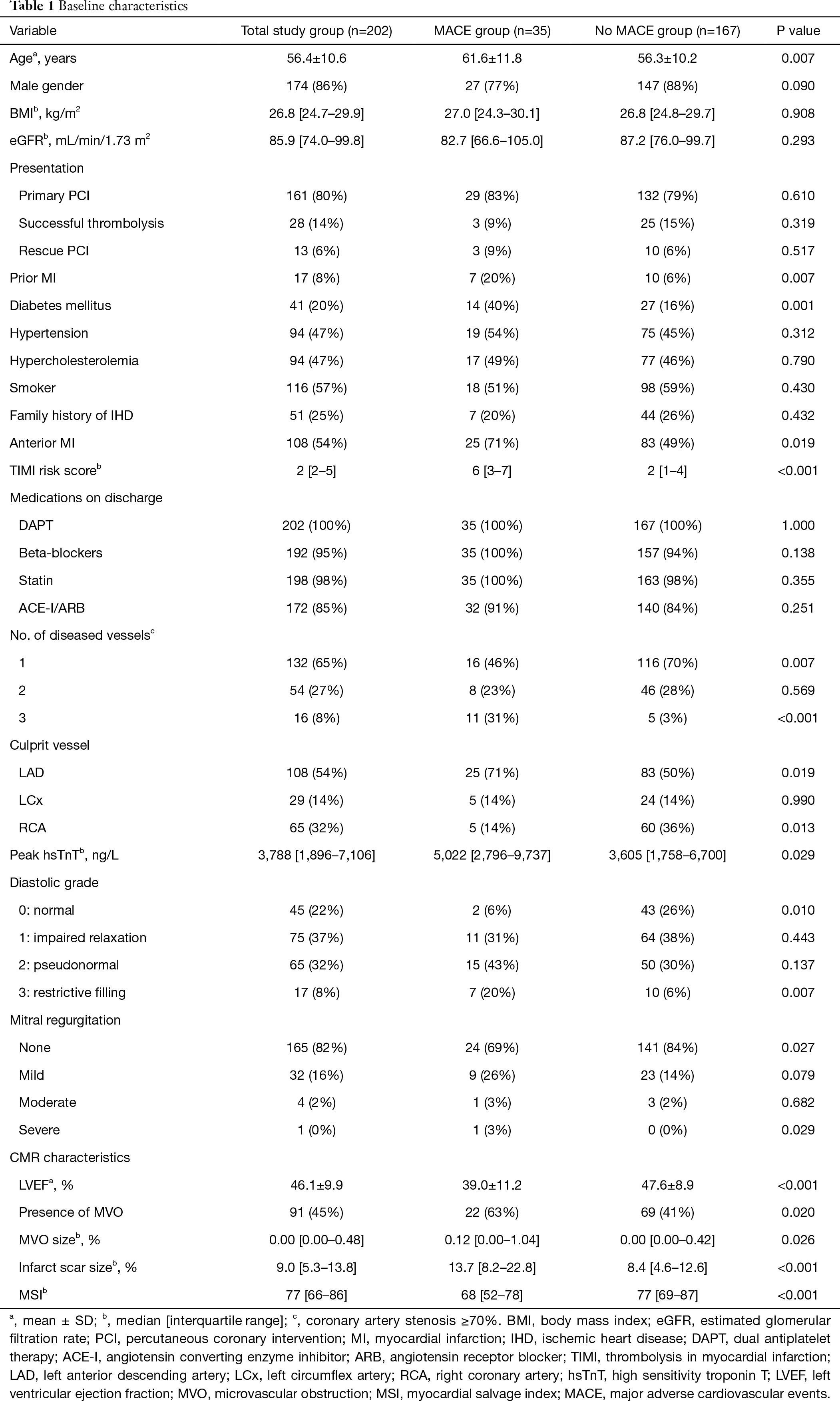 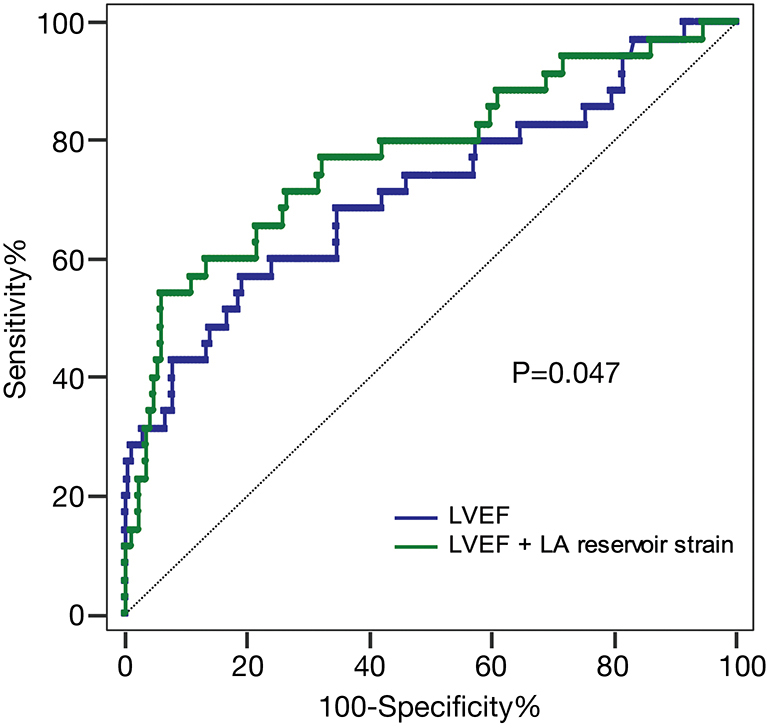 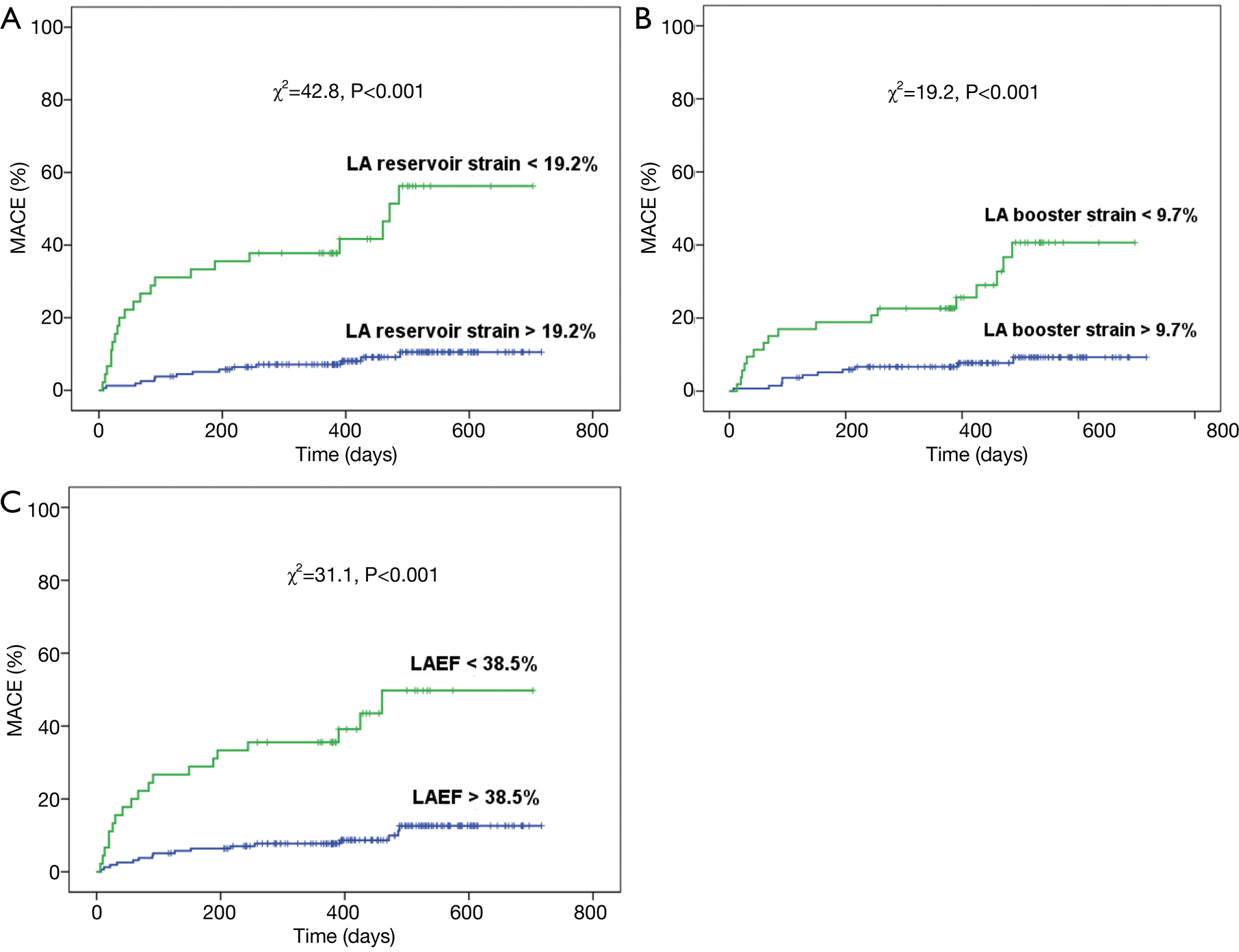 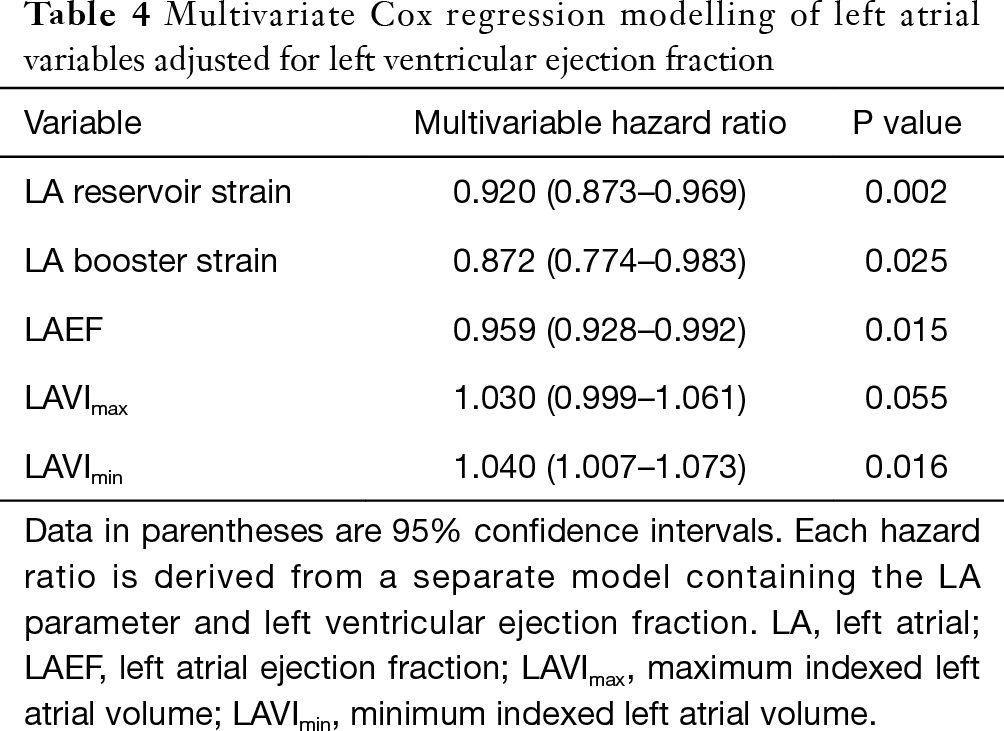 Furthermore, AUC analysis demonstrated a significant improvement in MACE prediction when LA reservoir strain was added to LVEF. This is an important finding considering LVEF is currently the most widely used risk predictor post STEMI in guiding heart failure therapy. By comparison, Ledwoch et al. found that LAEF did not have an additive value in terms of MACE prediction after acute MI over and above LVEF (3), highlighting the utility of phasic measures such as LA reservoir strain over volumetric indices.

Our study provides external validation to the findings of Schuster et al. (7) in a patient cohort with a higher MACE rate and longer follow up duration. One limitation of the study by Schuster et al. was that assessment of diastolic function was not performed, and hence the authors could not assess the effect of diastolic dysfunction on LA strain or exclude the possibility that changes in atrial function reflected ventricular diastology (7). By comparison, our study is novel because we have assessed diastology with a paired CMR and transthoracic echocardiogram for each patient and have adjusted for diastolic dysfunction and mitral regurgitation severity. This is particularly important because recent studies have demonstrated a linear decrease in LA reservoir strain with increasing grades of diastolic dysfunction (21,22), and significant diastolic dysfunction has been shown to be an independent predictor of adverse outcomes post MI (23). We found similar cutoff values for LA reservoir strain (19.2% vs. 18.8%) and LA booster strain (9.7% vs. 10.1%) to Schuster et al. despite using different vendors for feature tracking analysis (CVI42 vs. TomTec Imaging Systems) (7), demonstrating the robustness of the derived strain values. In contrast to LA strain, which is relatively independent of atrial size, LAVImax was not an independent predictor of MACE when adjusted for LVEF. LA reservoir strain also demonstrated a stronger correlation with established markers of myocardial damage including LVEF, infarct scar size, MSI and peak hsTnT compared to LAVImin and LAVImax. Similar to Ledwoch et al., we found that there was a modest positive correlation between LAEF and LVEF (r=0.373), and a modest inverse correlation between LAEF and infarct scar size (r=−0.399) (3). This may be because volumetric indices are subject to geometrical assumptions and are load dependent, and LA reservoir strain better reflects intrinsic LA function (20,24). LA reservoir strain reflects atrial compliance and to a lesser extent, atrial contractility and relaxation, modulated by descent of the LV base during systole (1,18). Volumetric indices may also be limited by lower sensitivity in early disease states compared with LA strain (25). LAVImax is predominantly a marker of chronically elevated LV filling pressure, whereas LAVImin is more sensitive to changes in atrial afterload and atrial elastance (1). Lønborg et al. showed that LAVImax is not associated with acute LV function but determined by pre-existing conditions, whilst LAVImin is determined by acute changes in LV function such as acute stunning and infarct size as well as pre-existing conditions (4).

We postulate that LA reservoir strain may potentially have a role in improving risk stratification post-STEMI in the future, although further validation studies are needed. It is promising that the technique does not require additional CMR scanning time and offline analysis can be performed efficiently with high inter-observer and intra-observer reproducibility.

The limitations of our study include the relatively small number of primary endpoint events which makes it difficult to develop a comprehensive risk prediction model. Second, we included patients who were able to tolerate CMR and this may have excluded some of the most critically ill patients, which has implications on MACE rates. Third, the cutoff values for high-risk groups for each LA parameter were not compared to a control group. Fourth, the assessment of diastolic function was performed based on previous criteria, which have subsequently been updated. Finally, the exclusion of patients with AF may have limited the prognostic role of LA booster strain which is absent in AF.

In conclusion, impaired LA function predicted MACE independent of LVEF and may have a future role in improving risk stratification after STEMI.

Conflicts of Interest: All authors have completed the ICMJE uniform disclosure form (available at http://dx.doi.org/10.21037/cdt-20-879). The authors have no conflicts of interest to declare.

Ethical Statement: The authors are accountable for all aspects of the work in ensuring that questions related to the accuracy or integrity of any part of the work are appropriately investigated and resolved. The study was conducted in accordance with the Declaration of Helsinki (as revised in 2013). The study was approved by the Human Research Ethics Committee at Concord Hospital, Sydney Australia (HREC/11/CRGH/224; approval CH62/6/2011-151) and informed consent was taken from all the patients.