Acute myocardial infarction (AMI) is one of the most common cardiovascular diseases (1). AMI was considered as a leading cause of morbidity and mortality around the world and was particularly prevalent in elderly patients (2). Hypoxia/reoxygenation (H/R) injury could exert irreversible damage to microenvironment homeostasis, leading to myocardial cell apoptosis, which were major reasons for the occurrence of AMI (3). The early diagnosis and timely therapy could repair ischemic myocardium, therefore reduce mortality and improve the clinical outcome (4). Thus, the identification of myocardial cell apoptosis-related markers could improve the treatment and management of AMI.

Long noncoding RNAs (lncRNAs) with a length of over 200 nucleotides have been demonstrated to regulate gene expression and to has various biological functions in human diseases, such as cancers, cardiovascular diseases, and neurodegenerative diseases (5-8). Nowadays, the role of relevant lncRNAs in the physical and pathological processes of cardiovascular disease, including AMI, has attracted special attention. For example, lncRNA MALAT1 was found to be upregulated in AMI, of which the knockdown could attenuate myocardial apoptosis (9). Smooth muscle and endothelial cell enriched migration/differentiation-associated lncRNA (SENCR) is a lncRNA located on chromosome 11and enriched in vascular (10). Previously, SENCR was revealed to inhibit the proliferation and migration of human aortic-vascular smooth muscle cells, which are key regulatory links of atherosclerosis, via regulating the miR-4731-5p/FOXO3a pathway (11). AMI is one of the main clinical manifestations of atherosclerosis, therefore, it was speculated that SENCR may be involved in the occurrence and development of AMI.

LncRNAs could interact with specific microRNA to affect the translation of microRNAs, which is involved in the biological process of human diseases. Recently, circulating miR-1 has been revealed to be upregulated and to have significant diagnostic and prognostic value in AMI (12). Another study also presented that the overexpression of circulating miR-1 can predict the occurrence of larger infarct size and more myocardial necrosis (13). The role of SENCR in AMI was studied in this study and its potential molecular mechanism among SENCR and circulating miR-1 was also declaimed. We presented the following article in accordance with the MDAR reporting checklist (available at http://dx.doi.org/10.21037/cdt-20-1037).

This study had obtained approval from the Ethics Committee of Changle People’s Hospital (approval No. 2017089) and followed ICMJE guidelines. The study was conducted in accordance with the Declaration of Helsinki (as revised in 2013). Informed consent was obtained from all participators.

A total of 73 AMI patients and 77 volunteers without AMI but with chest pain were included in this study during 2017–2019. The inclusion criteria of AMI patients were as follows based on the 2012 European Society of Cardiology (ESC)/American Heart Association (AHA)/American College of Cardiology (ACC) guidelines (14): (I) the level of cTnI >0.1 ng/mL or the level of CK-MB doubled; (II) persistent chest pain >20 min; (III) pathological Q wave; (IV) significant changes in ST-segment T wave or new left bundle branch block; (V) imaging evidence for the abnormal ventricular wall motion or loss of viable heart muscle; (VI) completed clinical data. Patients with the history of heart disease or malignant tumor and patients who received surgery were excluded. The control volunteers were non-AMI patients with chest pain who were hospitalized during the same period with a similar composition of gender and age and had no coronary artery stenosis in the same catheterization laboratory. Serum samples were collected from each participator and centrifuged to obtain the supernatant for the following analyses.

The TRIzol (Invitrogen, USA) was used to isolate total RNA from collected samples and cultured cells. cDNA was generated with extracted RNA by using a reverse transcription kit (Fermentas, Thermo Fisher Scientific, Inc.). The expression of SENCR and miR-1 was detected by qRT-PCR with SYBR Green kit (Thermo Fisher Scientific, Inc.), and β-actin and U6 were used as the reference genes. PCR was conducted with following conditions: 95 °C for 10 min, 40 cycles of 95 °C for 10 s and 60 °C for 45 s, then 95 °C for 15 s, 60 °C for 1min, 95 °C for 15 s and 60 °C for 15 s. The results were calculated by the 2−ΔΔCt method.

The ELISA assay was performed on 96-well plates. The protein concentrations of IL-1β, TNF-α, and IL-6 in serum samples were detected by ELISA kit (R&D System) according to the instructions. The absorbance at 450 nm was measured by an ELISA plate reader (Biotrak GE, USA), and the concentration was obtained by comparison to the standard curve. The analyses were performed in triplicate.

The binding sites between SENCR and circulating miR-1 were predicted online with the help of an online tool (http://www.rna-society.org). The 3'UTR of SENCR containing the binding sites was cloned into pGLO vector to establish a wild-type SENCR reporter vector (WT-SENCR). While the mutant-type SENCR reporter vector (MT-SENCR) was generated by site mutation. The WT-SENCR or MT-SENCR vectors were co-transfected with miR-1 mimics or miR-NC into cultured cells for 48 h. The Dual-Luciferase Reporter Assay kit (Promega) was employed to evaluate the luciferase activity of SENCR with Renilla luciferase activity as the reference.

Cell viability was assessed by the MTT assay. Briefly, cells were seeded into 96-well plates supplied with culture medium and incubated for 24 h at 37 °C. Then, the MTT solution was added to each well and continued incubating for 4 h. After that, 100 µL DMSO was added, and OD 490 nm was detected with a microplate reader to evaluate the viability of cells.

Cells were seeded into the 6-well plates and incubated for 24 h at 37 °C. Cells were collected and washed with cold PBS solution twice. Annexin V-FITC and propidium iodide (PI) were added according to the instructions. After incubation in the dark for 15 min, the apoptosis ratio of the cells was detected by the FACSCanto II flow cytometry (BD Biosciences).

All data are represented as mean ± standard deviation (SD) obtained from independent triplicate experiments. Data analyses were performed with the help of SPSS 20.0 software (SPSS, Inc., USA) and GraphPad (GraphPad Software, Inc., USA). The Student’s t-test was employed to estimate the differences between two groups, and the one-way ANOVA followed by the Turkey post-hoc was to evaluate the differences among multiple groups. The correlation between SENCR and the level of cTnI and CK-MB of patients was evaluated by the Pearson’s correlation analysis. The value of P<0.05 was statistically significant.

The baseline characteristics of patients

The clinical features of the study subjects were summarized in Table 1. The significant difference was found in the level of cTnI and CK-MB between the control volunteers and AMI patients (P<0.001). While other characteristics, including age, gender, total cholesterol (TC), high-density lipoprotein (HDL), low-density lipoprotein (LDL), triglyceride (TG), serum creatinine (Scr), systolic blood pressure (SBP), and diastolic blood pressure (DBP), showed insignificant differences between the control group and the AMI group (P>0.05). 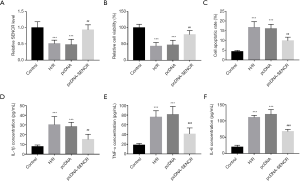 Figure 2 Effect of SENCR on cell apoptosis and inflammation induced by H/R injury. (A) SENCR was significantly downregulated in H/R injury cardiomyocyte and upregulated after the transfection of pcDNA-SENCR. (B) The treatment of H/R injury significantly inhibited cell viability, which was reversed by the overexpression of SENCR. (C) The treatment of H/R injury significantly enhanced cell apoptosis rate, which was alleviated by the overexpression of SENCR. (D,E,F) The protein concentration of pro-inflammatory cytokines dramatically increased in the H/R injury group and decreased in the SENCR overexpression group. ***, P<0.001 relative to the control group; ##, P<0.01; ###, P<0.001 relative to the H/R injury group. H/R, hypoxia/reoxygenation.

Furthermore, the protein concentrations of pro-inflammatory cytokines (IL-1β, TNF-α, and IL-6) were evaluated after the H/R injury and the overexpression of SENCR. The protein concentration of IL-1β, TNF-α, and IL-6 significantly increased after the treatment of H/R injury (P<0.001, Figure 2D,E,F). The overexpression of SENCR by the transfection of pcDNA-SENCR reduced the increased concentration of pro-inflammatory cytokines induced by H/R injury (P<0.01, P<0.001, Figure 2D,E,F).

It was predicted that SENCR could bind to miR-1, and the binding sites were shown in Figure 3A. The relative luciferase activity of WT-SENCR was suppressed by the overexpression of miR-1 compared with the NC group (P<0.001, Figure 3B). While no significant effects of miR-1 expression were found in the luciferase activity of MT-SENCR (P>0.05, Figure 3B). Additionally, miR-1 was found to be upregulated in H/R injury cardiomyocytes, which was inhibited by the overexpression of SENCR (P<0.001, Figure 3C). 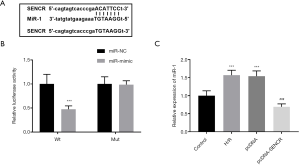 Figure 3 SENCR targets miR-1 in cardiomyocytes. (A) Binding sites between SENCR and miR-1. (B) miR-1 significantly suppressed the relative luciferase of Wt-SENCR. ***, P<0.001. (C) miR-1 was significantly upregulated in the H/R injury group, which was suppressed by the overexpression of SENCR. ***, P<0.001 relative to the control group. ###, P<0.001 relative to H/R injury group. H/R, hypoxia/reoxygenation; Wt, wild type. 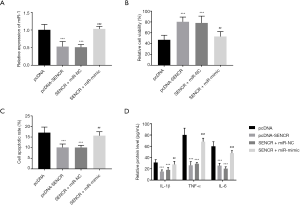 AMI is the myocardial injury by emergency occlusion of coronary arteries, which seriously threaten human life and health. Although the diagnosis and treatment of AMI have developed in the past decades, the incidence rate and mortality rate were still increasing worldwide. The early detection and intervention are necessary to reduce myocardial damage and improve the prognosis of patients. cTnI and CK-MB are two common diagnostic markers in the clinic, however, these indicators are vulnerable to heart failure, malignant tumor, renal insufficiency, infection, and other kinds of diseases, which decrease the accuracy of diagnosis (15,16). Therefore, it is of great importance to explore novel diagnostic and prognostic indicators. Previous studies have reported a number of lncRNAs that play vital roles in the occurrence and development of various human diseases, especially heart diseases. For example, lncRNA-Safe served as a key regulator of cardiac fibrosis, which could be a novel target for anti-fibrotic therapy (17). The knockdown of lncRNA Meg3 in cardiac fibroblasts could improve diastolic performance and inhibit cardiac fibrosis (18).

SENCR is a vascular cell-enriched lncRNA, which has been demonstrated to regulate the differentiation, proliferation, and migration of smooth muscle cells and is associated with the remodeling of vascular (10,19,20). Previous studies reported the functional role of SENCR in atherosclerosis, which is the basis of AMI, indicating its potential role in AMI (10,21). The significant downregulation of was found in the serum of AMI patients, compared with the control volunteers in this study. The downregulation of SENCR was negatively correlated with the cTnI and CK-MB of patients, which are two main diagnostic markers for AMI, indicating that SENCR may be involved in the disease development of AMI (22).

miR-1 was reported to specific expressed in the myocardium and involved in the differentiation of cardiac progenitor cells (24). Recently, the diagnostic and prognostic value of miR-1 in AMI has been disclosed, and the involvement of miR-1 in the pathological process of AMI has also been demonstrated (25,26). It was found that miR-1 could alleviate the cell apoptosis and enhanced cell viability induced by the overexpression of SENCR. The overexpression of miR-1 also suppressed the inflammatory response of cardiomyocytes with high expression of SENCR, suggesting that miR-1 participated in the function of SENCR. miR-1 was also demonstrated to bind with SENCR, which inhibited the expression of miR-1. Therefore, the potential molecular mechanism underlying the biological function of SENCR was revealed to be a result of sponging miR-1.

In summary, SENCR was downregulated in AMI and negatively correlated with the cTnI and CK-MB of patients. SENCR could alleviate cardiomyocyte apoptosis and inflammation induced by H/R injury by sponging miR-1.

Reporting Checklist: The authors have completed the MDAR reporting checklist. Available at http://dx.doi.org/10.21037/cdt-20-1037

Conflicts of Interest: All authors have completed the ICMJE uniform disclosure form (available at http://dx.doi.org/10.21037/cdt-20-1037). The authors have no conflicts of interest to declare.

Ethical Statement: The authors are accountable for all aspects of the work in ensuring that questions related to the accuracy or integrity of any part of the work are appropriately investigated and resolved. This study had obtained approval from the Ethics Committee of Changle People’s Hospital (approval No. 2017089). The study was conducted in accordance with the Declaration of Helsinki (as revised in 2013). Informed consent was obtained from all participators.