Cardiovascular disease (CVD) is the leading cause of death worldwide (1) and accounts for more than 40% of deaths in China (2). CVD is caused by multiple invariable and variable factors, the former includes age, gender, genetic heritage, and the latter includes smoking, physical inactivity, obesity, hypertension, hyperglycemia, and hyperlipidemia, which can be modified (3). Dyslipidemia is the strongest modifiable risk factor for CVD, and blood lipids measurement is an integral part of overall CVD risk assessment (4). For decades, lots of guidelines recommended fasting blood lipids (usually at least 8 h or even overnight after the last meal) to be used in lipids measurement, which poses obvious barriers and inconvenience to lipids detection, such as poor compliance, time-consuming, losing visit and missed cases.

As we know, there are few studies about using non-fasting lipids to evaluate cardiovascular risk for primary prevention in China (17), especially in comparison between fasting and non-fasting lipids in the same patients on the same day (18). The aim of this study was to use fasting and non-fasting lipid profiles to estimate CVD risk in Chinese participants through two established risk assessment tools: China atherosclerotic CVD (ASCVD) risk estimator and Europe Systemic Coronary Risk Estimation (SCORE) risk charts, and compare the consistency between two estimators.

We present the following article in accordance with the MDAR reporting checklist (available at https://dx.doi.org/10.21037/cdt-20-1012).

From March 2018 to September 2018, 127 participants (76 men, 51 women) without ASCVD were enrolled at the Second Xiangya Hospital of Central South University. All participants were hospitalized due to supraventricular tachycardia (SVT) without acute attacks waiting for radiofrequency ablation, and had no history of thyroid diseases, liver and kidney diseases, autoimmune disease, cancer, or other severe medical illnesses, and no one took hypolipidemic agents. We chose these participants because there were no absolutely healthy participants in the cardiovascular medicine ward. Besides, SVT patients without any underlying CVDs would be closest to the “general participants”. Acute attacks of supraventricular tachycardia include atrial fibrillation, paroxysmal supraventricular tachycardia, atrial flutter, and atrial tachycardia. We excluded these acute attacks because possible changes in lipids levels due to acute stress. Meanwhile, all participants included in this study without history of CVDs, including coronary artery disease, heart failure, stroke, peripheral arterial disease, etc. The study was approved by the Ethics Committee of the Second Xiangya Hospital of Central South University (No. ChiCTR1900020873) and informed consent was gained from all participants. The study was conducted in accordance with the Declaration of Helsinki (as revised in 2013).

All enrolled participants took breakfast according to their daily diet habits. Venous blood samples were collected before and at 2 h, 4 h after breakfast. During the 4 h period, participants were only allowed to drink water and prohibited to smoke, drink wine, eat any food or strenuously exercising. Fasting blood lipids usually at least 8 h or even overnight after the last meal. In this study, we collected fasting blood samples before breakfast, because there is no need to wait 8 hours after breakfast which it is not easy for participants to keep fasting during the day time.

All data were analyzed using Social Sciences (SPSS) version 22.0 and Graph Pad prism7.0 software. Continuous variables and categorical parameters were compared with the Students t-test and chi-square test, respectively. Quantitative variables were expressed as mean ± standard deviation (SD) unless specifically explained, and qualitative variables were expressed as numbers and percentages. Reliability analysis was performed with the Kappa statistic to determine consistency among estimators. Two estimators were said to be in poor agreement if the Kappa statistic was <0, in slight agreement if 0.0 to 0.20, fair agreement if 0.21 to 0.40, moderate agreement if 0.41 to 0.60, substantial agreement if 0.61 to 0.80, and in perfect agreement if it was 0.81 to 1.00 (25). All tests were considered to be statistically significant at P value <0.05.

Total participants in this study were 127, including 76 men (59.8%) and 51 (40.2%) women. There were no significant differences in age, systolic or diastolic blood pressure, TC level, LDL-C level, non-HDL-C level, the percentages of cases with hypertension and diabetes between male and female participants, except male participants had significantly higher body mass index (BMI), levels of TG and RC, while lower HDL-C level. Besides, smokers incorporated in this study were all male (Table 1). 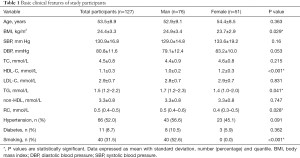 Taking all participants as a whole, the serum levels of TC and non-HDL-C mildly decreased at 2 h, but slightly recovered at 4 h. In the meantime, both TG and RC levels increased significantly and reached their peak at 4 h while LDL-C level reached the lowest value at 4 h (P<0.05). Besides, postprandial change in HDL-C level was negligible (Figure 1). 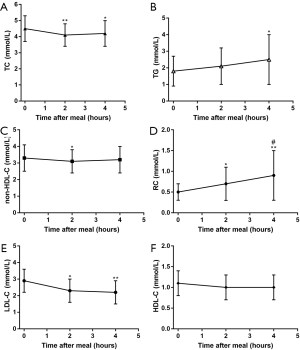 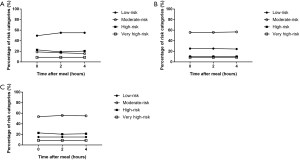 Non-fasting lipid profiles changes in this study, especially LDL-C and TG, were relatively different from Denmark’s studies, which showed insignificant changes after a daily meal, and maximal mean changes between non-fasting versus fasting blood samples as measured in random are +0.3 mmol/L for TG level and −0.2 mmol/L for TC and LDL-C (5,6,27,28). However, TC and LDL-C levels decreased by 0.3 and 0.7 mmol/L, respectively, while TG level increased by 0.6 mmol/L at 4 h after a daily breakfast in this study. The potential causes for non-fasting reduction in LDL-C level and increment in TG level were complicated and controversial. In our previous study, we found that postprandial reduction in direct measured LDL-C level was more prominent than that in calculated LDL-C level by Friedewald formula at both 2 h and 4 h after a daily breakfast in Chinese subjects (29), and LDL-C level was detected by direct method in the present study. Additionally, some scholars believed that mildly reduction in LDL-C level after a daily meal was due to fluid intake, but changes could be corrected by adjustment for albumin levels (6,30). All participants had their breakfast according to their daily habits with similar type and amount of food. In addition, we will record their daily appetite, sleep quality and body weight during hospitalization. As participants were similar to the “general participants”, their physical condition and appetite remained good in this study. Compared with the western breakfast, traditional Chinese breakfast could have a higher carbohydrate content and fluid intake, such as porridge, noodles, vermicelli, soy milk and so on, but not breakfast rich in protein and/or fat and solid food such as cheese, sausage, ham, and bacon (31,32). Unfortunately, changes in albumin levels were not included in this study. Moreover, the potential role of difference in commercial lipid test kits and race between different studies could also be considered.

In addition, there is a reducing trend in CVD risk using China ASCVD risk estimator with non-fasting samples, which is not the case in European SCORE charts, even though that reducing trend due to habitual food intake was minimal and without clinical consequences (P=0.970, Tables S1,S2). In view of the decreases of TC, LDL-C and HDL-C levels after a daily meal, the risk of ASCVD assessed by non-fasting blood lipids would be underestimated rather than overestimated. Changes in risk categories paralleled with lipids changes that TC, LDL-C and non-HDL-C levels decreased after a daily breakfast (Figure 1). Moreover, participants will reclassify into different risk categories based on non-fasting lipids after a daily meal when compared with corresponding fasting lipids. In addition, number of participants in this study was relatively small, and it is possible if we include more samples, there is no reducing trend.

China ASCVD risk estimator was primarily based on results of China-PAR (i.e., Prediction for ASCVD Risk in China) project which was the first study to develop and validate the 10-year ASCVD risk in four large, contemporary Chinese populations, and it was fasting lipid profiles used in that project (22). In addition, China-PAR project included age, BP, TC level, LDL-C level, HDL-C level, current smoking, and diabetes mellitus, had been proved excellent performance in ASCVD risk prediction with good internal consistency and external validation compared with western estimators (33,34).

SCORE system, which estimated 10-year cumulative risk of first fatal atherosclerotic events, had been recommended for risk stratification in European countries, and the corresponding risk estimator had been produced as charts for low- and high-risk regions (24). SCORE system was based on large, representative European cohort datasets, included several risk factors, such as age, gender, smoking, systolic blood pressure and total cholesterol level in risk charts. Agreement between fasting and non-fasting in risk stratification was high in both low- and high-risk charts, and it was TC level used in SCORE risk charts.

Agreement between SCORE low-and high-risk charts was high, whereas relatively poor with China ASCVD risk estimator as the former classified half of the participants as moderate risk, while China ASCVD risk estimator assessed half of the participants as low risk in the same participants, which indicated that SCORE risk charts may overestimate CVD risk in Chinese general participants. That is to say that SCORE system may not be appropriate for Chinese individuals to evaluate 10-year CVD risk. Substantial differences in prediction capability between China ASCVD risk estimator and SCORE risk charts could be due to ethnic heterogeneities, distinctive risk characteristics of CVD, as well as different treatment, control rates of risk factors (e.g., hyperlipidemia) (26,35-38). Since two established risk assessment systems above were based on research results or databases of their own respective populations, which caused big differences in genetic heritage, living, and eating habits and environment that are all matters to CVD risk stratification. Thus, it is more suitable for individuals to use specific and regional assessment tools when conducting cardiovascular risk assessments.

There were several limitations in this study. Firstly, the number of participants in this study was relatively small. Secondly, this is a cross-sectional study, thus it was impossible to verify occurrence of cardiovascular events. A prospective study with large sample size could be needed to further explore application of non-fasting lipids in CVD risk assessments in Chinese general population.

We would like to thank Alessandro Shapiro for his help in polishing our paper.

Funding: This work was supported by National Natural Science Foundation of China (No. 81902512 and 81470577), Fundamental Research Funds for the Central Universities of Central South University (No. 2018zzts047) and Hunan Provincial Innovation Foundation for Postgraduate (No. CX20200288).

Reporting Checklist: The authors have completed the MDAR reporting checklist. Available at https://dx.doi.org/10.21037/cdt-20-1012

Conflicts of Interest: All authors have completed the ICMJE uniform disclosure form (available at https://dx.doi.org/10.21037/cdt-20-1012). The authors declare no conflicts of interest.

Ethical Statement: The authors are accountable for all aspects of the work in ensuring that questions related to the accuracy or integrity of any part of the work are appropriately investigated and resolved. The study was conducted in accordance with the Declaration of Helsinki (as revised in 2013). The study was approved by the Ethics Committee of the Second Xiangya Hospital of Central South University (No. ChiCTR1900020873) and informed consent was gained from all participants.