Transcatheter aortic valve replacement (TAVR) has revolutionized the treatment of severe aortic stenosis and has become the gold standard treatment for patients with severe symptomatic aortic stenosis as approved by the US Food and Drug Administration (FDA) (1). Annual TAVR volume in the United States has increased steadily with more than 500% growth rate from approximately 5,000 in 2012 to almost 250,000 in 2019 (2). More recent trials (3-6) have expanded indications for TAVR to include patients with intermediate surgical risk, and results of the PARTNER 3 trial imply that TAVR will soon be the treatment of choice for low-risk candidates (7). With aging population, increased prevalence of aortic stenosis, and expansion of TAVR to low-risk and younger patient population group, there is going to be a rising demand and thus adequate resource utilization is of paramount importance (8). There is an increased emphasis on improving the healthcare quality in the United States. Healthcare reimbursement models are being shifted from “payment for volume” to “payment for value.” In this scenario, hospital systems are increasingly motivated to curb the hospitalization costs.

Given the increasing healthcare costs, there is an interest in developing machine learning (ML) prediction models for estimating hospitalization charges. ML models for colorectal (9) and gastric cancer (10) have been used to predict hospitalization charges. Similarly, Muhlestein et al. (11) developed ensemble ML models for estimating charges following trans-sphenoidal surgery for pituitary tumors. However, to the best of our knowledge there does not exist cost prediction models for cardiovascular procedures including TAVR. Herein, we use ML algorithms to predict hospitalization charges for patients undergoing transfemoral TAVR (TF-TAVR) utilizing the National Inpatient Sample (NIS) database. We present the following article in accordance with the TRIPOD reporting checklist (available at https://cdt.amegroups.com/article/view/10.21037/cdt-21-717/rc).

We used the Agency for Healthcare Research and Quality’s NIS, the largest all-payer database of hospitalized patients in the United States. Patients aged ≥18 years with a discharge diagnosis aortic valve stenosis who underwent TF-TAVR [International Classification of Diseases, Ninth Revision, Clinical Modification (ICD-9-CM) procedure code 35.05 or 35.06 and International Classification of Diseases, Tenth Revision, Clinical Modification (ICD-10-CM) procedure codes 02RF37H, 02RF37Z, 02RF38H, 02RF38Z, 02RF3JH, 02RF3JZ, 02RF3KH, 02RF3KZ] from 2012 to 2016 were included in the study. Because the study used de-identified data, it was exempted from Institutional Review Board (IRB) approval. The study was conducted in accordance with the Declaration of Helsinki (as revised in 2013).

Fifty-nine variables, including patient and hospital characteristics were collected for each hospitalization (description of variables in supplementary table). Patient comorbidities were identified using the Elixhauser Comorbidity Software administered by AHRQ.

The primary outcome was total hospitalization charges, calculated in US dollars. All the charges were adjusted for inflation.

The missing values were imputed using the k-nearest neighbors (KNN) algorithm. This algorithm uses ‘feature similarity’ to make predictions about the missing values by finding the k’s closest neighbors to the observation with missing data and then imputing them based on the non-missing values in neighborhood. The data was imputed after the training/testing data split.

The study dataset was divided into 80% training and 20% testing sets for the development and validation of ML algorithms respectively. In our study, we used the following ML regression algorithms: random forest, gradient boosting, KNN, multi-layer perceptron and linear regression. The important features were selected using the random forest algorithm. Grid search strategy was used to identify the combination of hyperparameters for enlisted ML algorithms based on cross-validation. The searched parameters included max_depth (range from 4 to 8), max_features (auto, sqrt, log2), and n_estimators (range from 10 to 200). The optimal values of RF model included: max_depth of 8, max_features: sqrt, and n_estimators =100. In our study, we built ML algorithms for 3 stages: Stage 1, including variables that were known pre-procedurally (prior to TF-TAVR) at the time of admission; Stage 2, including variables that were known post-procedurally; Stage 3, including length of stay (LOS) in addition to the stage 2 variables.

Additional statistical analysis was performed to describe patient characteristics. Continuous variables were compared using the 2-tailed student’s t-test, whereas chi-square or Fischer exact tests were used for categorical data as appropriate. The analysis was conducted using python 3.6.9. The libraries used in the Python for this project were SciPy, Scikit-Learn and Numpy. 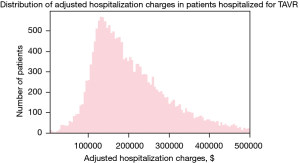 Table 2 shows the predictive performance of various ML regression algorithms in comparison to mean and median models for estimating the adjusted hospitalization charges in patients undergoing TF-TAVR. All the ML algorithms performed significantly better than the mean or median models. Random forest regression algorithm outperformed other ML algorithms at all stages with higher R2 score and lower MAE, RMSE and RMSLE (Stage 1: MAE 79,979.11, R2 0.157; Stage 2: MAE 76,200.09, R2 0.256; Stage 3: MAE 69,350.09, R2 0.453). Apart from random forest regression, gradient boosting regression for stage 1 variables and KNN regression for stage 3 variables performed better than linear regression algorithm. As expected, there was an increase in the predictive performance from Stage 1 to Stage 3 given the addition of variables. 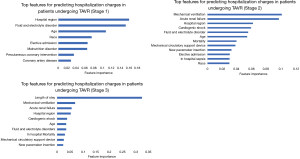 For stage 3, LOS was the most important predictor of hospitalization charges. Figure 2 depicts the two-way partial dependence interaction between LOS and the second important variable (i.e., mechanical ventilation).

Figure 4 Lift charts for the validation (testing cohorts) for stage 1, 2, and 3.

We found that LOS is by far the strongest predictor of adjusted hospitalization charges. The influence of this variable is so strong that the relative impact of all other variables is nearly negligible. Decreasing LOS is thus of paramount importance for cost-reduction strategy for this patient population. LOS is an indicator of cumulative effects of multiple factors including patient’s baseline characteristics, co-morbidities, clinical presentation, urgency of procedure, post-procedure complications, and individual hospital protocols. The adjusted costs for next-day discharge (NDD) following TAVR is nearly $7,500 lower compared with non- NDD (12).

Mechanical ventilation, acute renal failure, cardiogenic shock, use of mechanical circulatory support device, in hospital sepsis, and new pacemaker insertion were all associated with increased hospitalization costs. Acute kidney injury (AKI) occurs frequently following TAVR and has been associated with worse outcomes (13). AKI is expensive and consumes a considerable amount of health care resources. Even the most conservative episodes attribute approximately $1,700 in excess costs for each episode of AKI and $11,000 in excess costs for each episode of dialysis-requiring AKI (14). Since from the NIS database it is not possible to determine whether cardiogenic shock or use of mechanical circulatory support device occurred before or after the procedure, we included these variables in stage 2 in our study.

Other predictors of hospitalization charges

In our study cohort, there was a negative correlation of age with adjusted hospitalization charges. Higher costs in younger population is likely because the younger patients undergoing TAVR are relatively sicker and thus are at an increased risk of post-procedure complications.

The hospitalization charges for patients undergoing TF-TAVR varied across regions with highest in the west followed by north-east, south and mid-west regions. Healthcare expenditure in general varies widely by hospital region in United States. It is thus important to understand the regional differences in practice and attempt to reduce the wasteful charges for TAVR.

It is well established that there exist racial disparities in healthcare system. In our study population, around 90% patient population were Caucasians and 4% African-Americans and Hispanics. There occurs increased racial disparity in utilization of structural heart disease interventions (15). In our study population, there existed significant differences in adjusted hospitalization charges being higher in Hispanics and African-Americans compared with Caucasians. It is possible that decreased access to healthcare results in minority race patients presenting with advanced disease, driving up hospitalization charges.

To the best of author’s knowledge, this is the first attempt to develop a ML prediction model for estimating hospitalization charges in patients undergoing TAVR. Second, we predicted the performance of ML algorithms at various stages, from the time of admission until procedure completion and finally taking LOS into account. Third, a robust performance assessment was done for various ML algorithms using multiple evaluation metrics to identify which algorithm most accurately predicts our outcome of interest i.e., hospitalization charges in patients undergoing TF-TAVR. Fourth, ML algorithms were not only compared amongst themselves but also the mean and median models.

ML models are often criticized for overfitting. To overcome this, we validated our ML regression algorithms internally using a rigorous 5-fold cross fold validation technique. However, the models developed have not been externally validated on a separate cohort. We used the NIS database which inherently has certain limitations as have been described before. There are certain variables which were not available for analysis including type of valves (balloon-expandable or self-expandable), echocardiographic characteristics, acuity of condition, degree of pre-procedural shock, and others.

Reporting Checklist: The authors have completed the TRIPOD reporting checklist. Available at https://cdt.amegroups.com/article/view/10.21037/cdt-21-717/rc

Conflicts of Interest: All authors have completed the ICMJE uniform disclosure form (available at https://cdt.amegroups.com/article/view/10.21037/cdt-21-717/coif). The authors have no conflicts of interest to declare.

Ethical Statement: The authors are accountable for all aspects of the work in ensuring that questions related to the accuracy or integrity of any part of the work are appropriately investigated and resolved. The study was conducted in accordance with the Declaration of Helsinki (as revised in 2013).