Cardiac myxomas are rare tumors of the heart and are easily misdiagnosed. We report a case of large left atrial myxoma with clinical presentation mimicking severe mitral stenosis.

A 58 year-old woman was referred after complaining of dyspnoea and chest pain on exertion for 3 months. Dyspnoea had progressed to orthopnea and paroxysmal nocturnal dyspnoea. She denied experiencing fever, weight loss, or syncope. Blood pressure was 110/70 mmHg with a pulse rate of 79 bpm.

Chest radiograph revealed cardiomegaly. Transthoracic echocardiography was notable for enlargement of both atrium and the right ventricle with a large (58 mm × 30 mm), elliptical, mobile hyperechoic mass inside left atrium that prolapsed into the left ventricle during diastole. Color Doppler revealed increased velocity of blood flow across the mitral valve, moderate mitral regurgitation and severe tricuspid regurgitation with pulmonary artery systolic pressure estimation of 88 mmHg. The M-mode echocardiogram of mitral valve in the parasternal long axis showed prolongation of the ejection fraction slope similar to those seen in mitral stenosis (Figure 1A,B,C).

The patient was referred for open heart surgery, which was performed with cardio-pulmonary bypass. A large, 6 cm × 5 cm × 4 cm mass was identified inside left atrium, attached via a stalk to the postero-superior side of foramen ovale. The mass was successfully excised, and histopathological examination showed typical features of myxoma (Figure 1D). 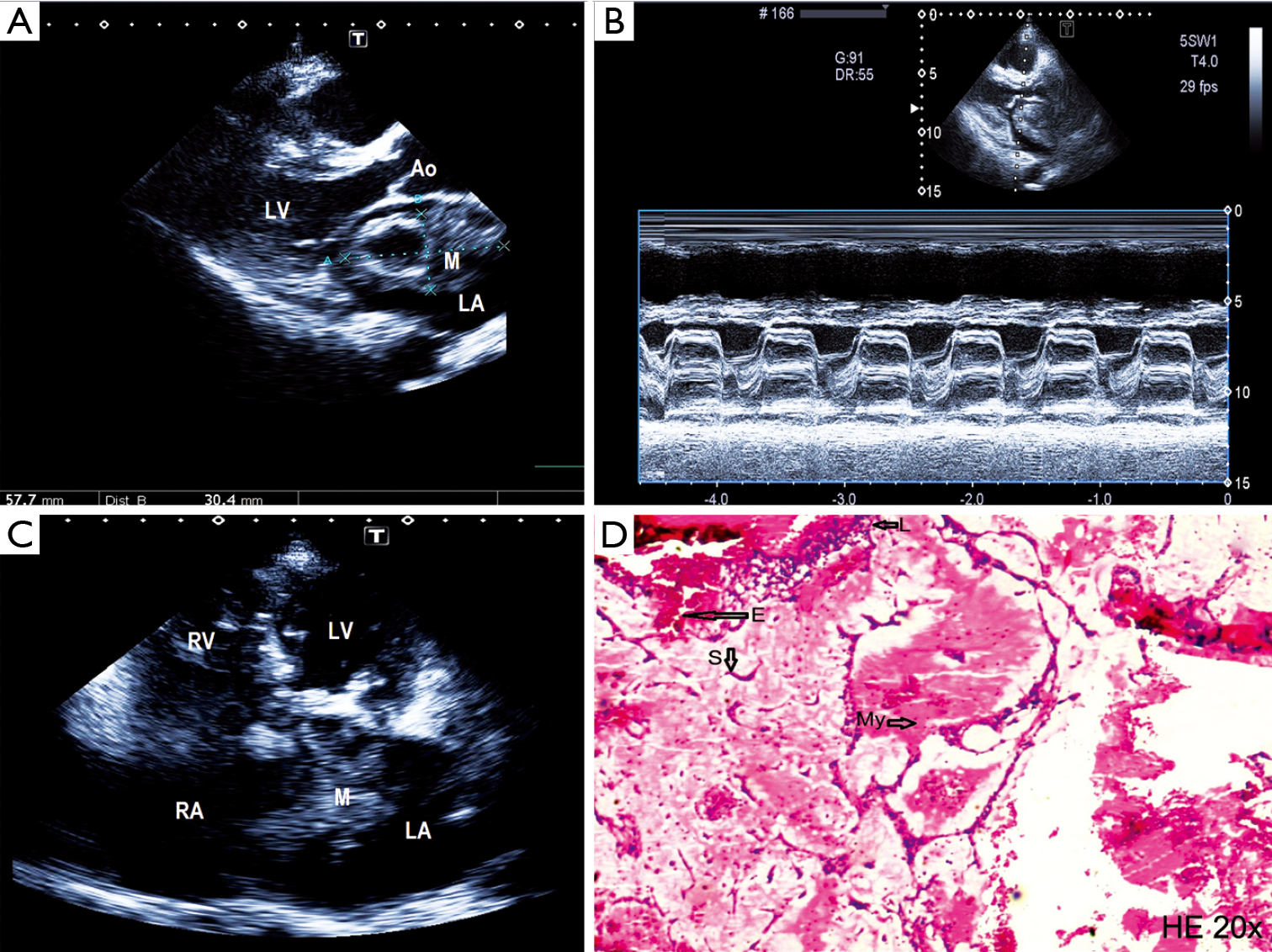 Postoperatively, the symptoms of heart failure improved and the patient remained free from angina.

Myxoma is the most common primary cardiac tumor, and accounts for 83% of primary tumors (1).The age of presentation varies from 1 month to 81 years with predilection of female gender (65%) (2). Most cardiac myxomas are sporadic, but a mutation of chromosome 17 (17q24) in protein kinase A type I-A can lead to Carney complex, a familial cardiac myxoma (3).

Due to a variety of nonspecific findings at first presentation, myxoma is initially suspected in only 5.7% of patients (4). Clinical manifestations can be classified into cardiac (67%), embolic (29%), and systemic (34%) symptoms (5).

Symptoms of left ventricular failure, as in the current case, are typically caused by partial obstruction of the mitral valve orifice by the myxoma. As in our case, myxomas might be initially misdiagnosed as mitral stenosis, but severe mitral stenosis, as seen in our patient has been described in only 14% of cases (6).

Presentation with chest pain is seen in 28% of cases (7). Typical angina with ischemic changes in electrocardiogram, as noted in our patient might easily misdiagnosed as coronary heart disease. Some authors have described coronary steal phenomenon as the possible underlying mechanism for the chest pain (8).

A diastolic murmur can be found in 64-67% of cases (5,7). ‘Tumor plop’ sound is more specific for diagnosis but only found in 15% of cases (5). Left atrial enlargement is a common finding in echocardiography but right heart enlargement, as noted in our patient, was found in only 4% of the cases (9).

In summary, myxomas are easily misdiagnosed and should be considered in the differential diagnosis in patients with suspected mitral valve disease. Echocardiography should be performed as early as possible to establish a prompt diagnosis and management.

Disclosure: All procedures followed were in accordance with the ethical standards of the responsible committee on human experimentation (institutional and national) and with the Declaration of Helsinki, as revised in 2000. For the purpose of publication, written informed-consent has been signed by the patient. This paper has not been published elsewhere in whole or in part. All Authors declared that they have no conflict of interest.